Just a few short hours outside of Bangkok, it’s possible to go from the hustle and bustle of this Southeast Asian metropolis to a pristine rainforest, home to a huge array of interesting wildlife. After we had spent a few days recharging our batteries and shopping in the city, we boarded a cheap government bus towards Khao Yai National Park.

Before departing Bangkok, I had already emailed Greenleaf Guesthouse, a local guesthouse and tour operator in nearby Pak Chong. They arranged to pick us up from the bus stop along with a French mother and daughter that were also going to Greanleaf.

While basic, Greanleaf provides comfortable and cheap accommodation and guided tours into the national park. We booked a fan room with attached bath in a clean concrete building (300 Baht / US$ 10) along with the one and a half day tour (1500 Baht / US$ 50 pp).

After dropping off our bags and grabbing some lunch, we jumped in the back of Greanleaf’s songthaew to begin the half-day portion of our tour. 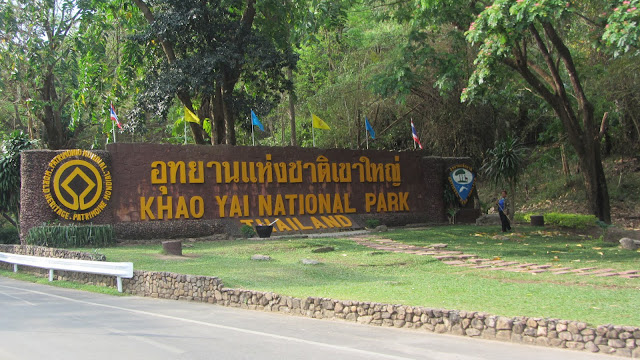 We started by visiting a monastery, where we descended into a nearby cave which is used by the monks to meditate. 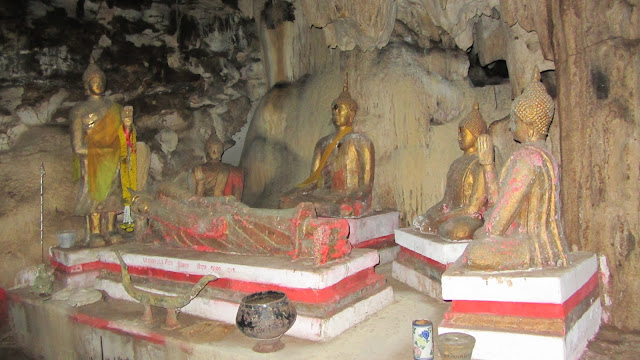 Down in the cave, we came across an absolutely huge number of sleeping bats. 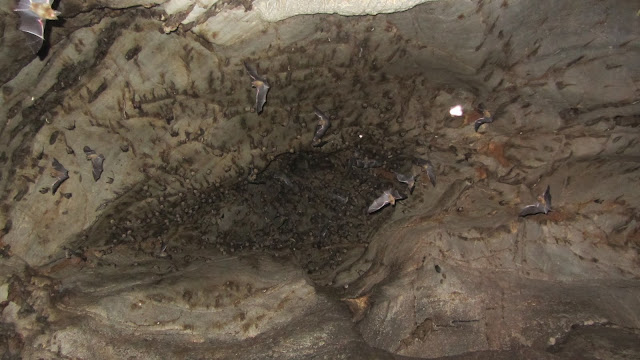 Our guide found a scorpion spider and asked if anyone would like to touch it. Heather kindly volunteered me and before I knew it this spider was crawling on my face! 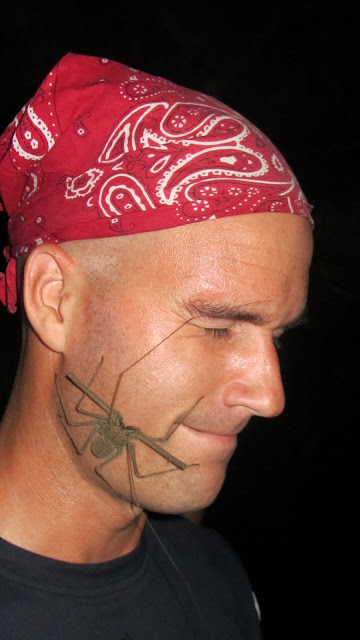 We also spotted a large Tarantula nest. Luckily, that one didn’t end up on my face (I’d already had that experience in Guatemala). 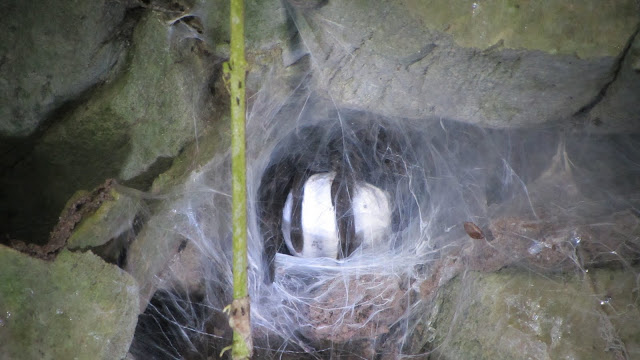 Finally, we left the cave and returned to the surface. The sun was beginning to set, so we climbed back in the pickup and went on a quest to see the nightly migration of hundreds of thousands of bats at dusk. Unfortunately, they were a little hard to spot due to the clouds rolling in, but we still enjoyed a nice sunset. 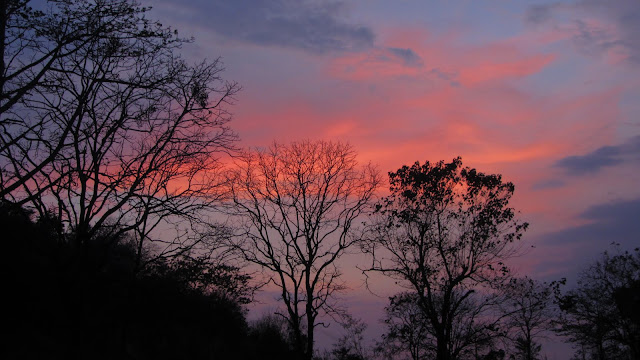 The next day we were up early for the highlight – a full day tour in Khao Yai National Park. 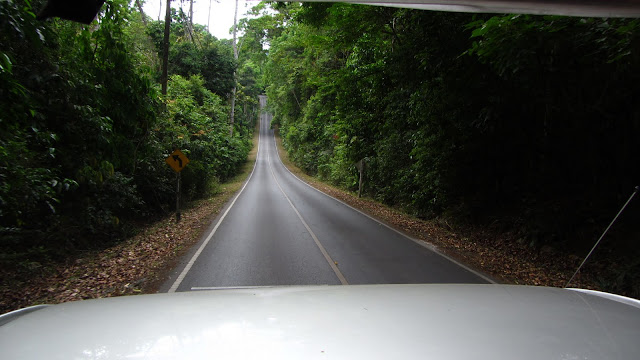 After a long ride into the park and up a winding road, we reached a scenic lookout at the top of a big hill. Here, our guide pulled out a spotting scope to view the beautiful Hornbills enjoying a breakfast of wild figs from a nearby tree. 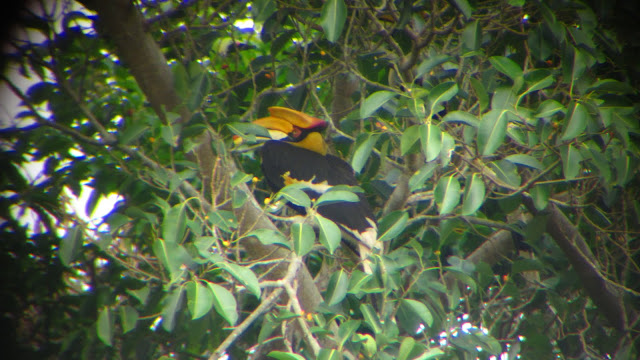 Some curious monkeys kept an eye on our truck in the parking area. 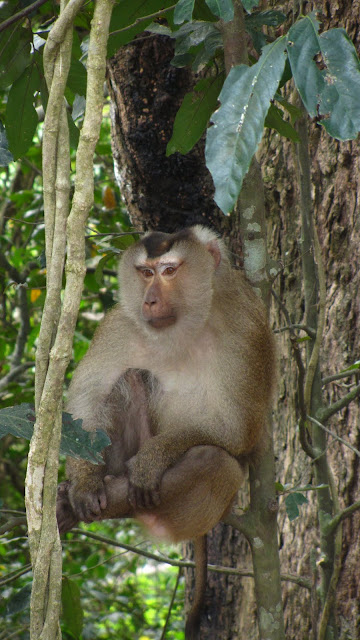 Next, we donned leech socks and set off on a jungle walk. 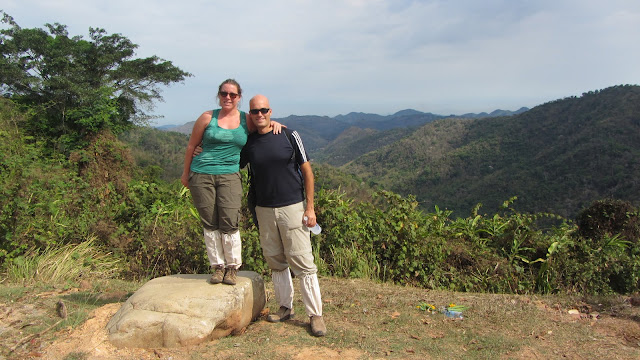 Our guide pointed out some interesting insects, such as the beautiful Horned Spider (also known as Spiny Orb Weavers). The large horns are designed to deter predators, mainly small birds. 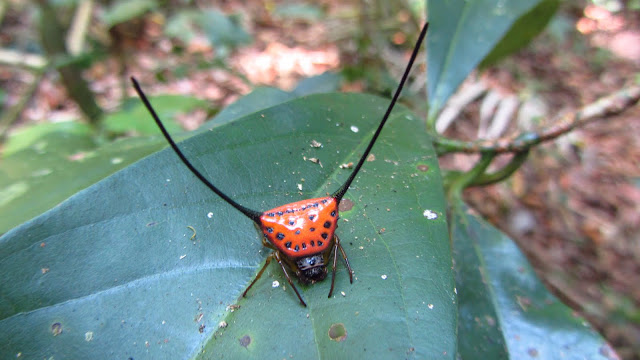 After digging around near a tree, our guide came back with an Asian Forest Scorpion. 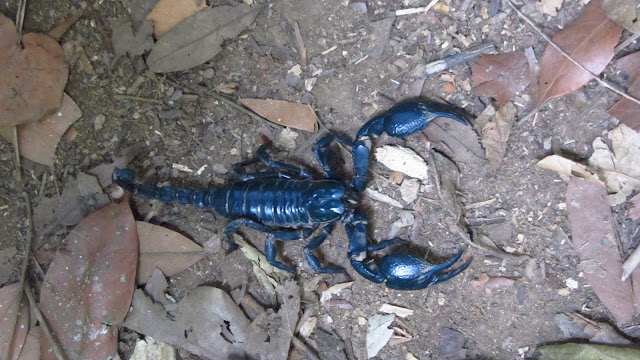 While holding the stinger back, we were given the opportunity to get a closer look at this touch the Scorpion. A much braver member of our small tour group even decided to let the scorpion crawl along her arm. 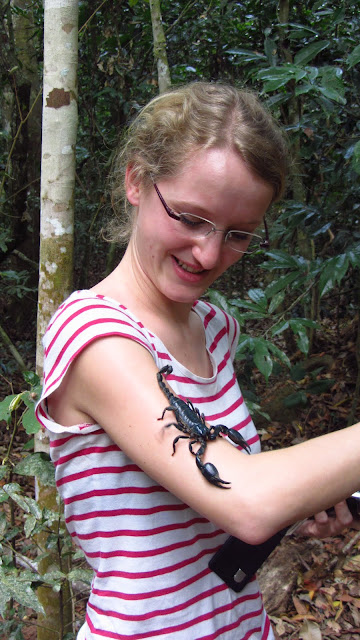 We were very luck on this walk, as we got to see a couple of different Gibbons. These small apes, which live their lives high up in the trees are extremely rare and facing an uncertain future, with their natural Southeast Asian habitat rapidly disappearing. 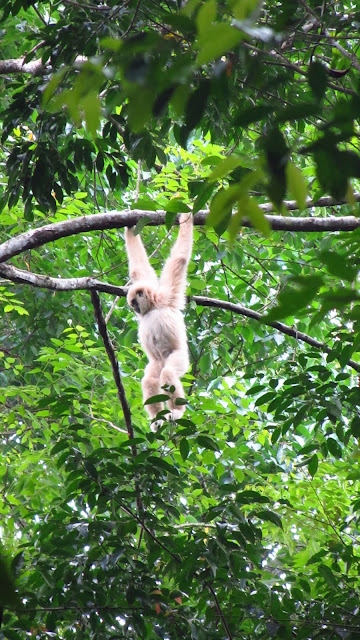 After a delicious packed lunch in the jungle, we visited the nearby Haew Suwat Waterfall, made famous in the movie The Beach. Since it was still dry season, the waterfall was really just a trickle, and it’s illegal to jump off the top like they did in the movie anyway. 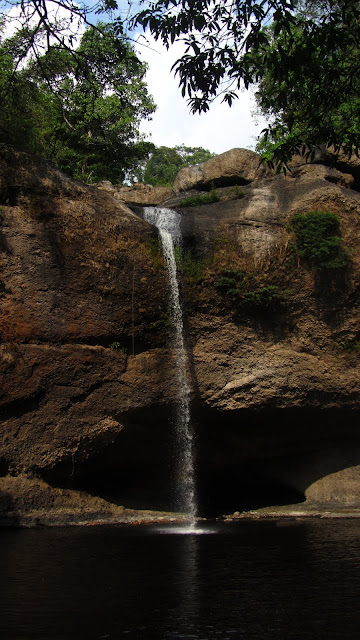 Finally, it was time for the best part – searching for elephants! An estimated 250 wild elephants live in the park, and the best time to spot them is early morning or late afternoon. As we traveled along the main park roads, we scanned the surrounding jungle for any signs of elephants. After thirty minutes of this we started to lose hope. Then, we passed another tour group which had stopped on the side of the road. Sure enough, a small group of elephants was nearby! 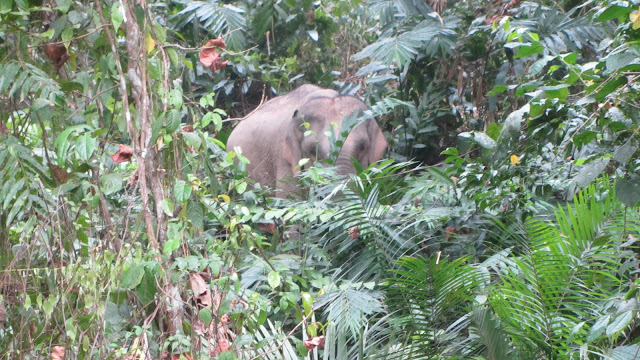 We watched as three elephants walked through the dense undergrowth, snacking on the abundant greenery. The group appeared to consist of a mother with young baby, and an adolescent male. 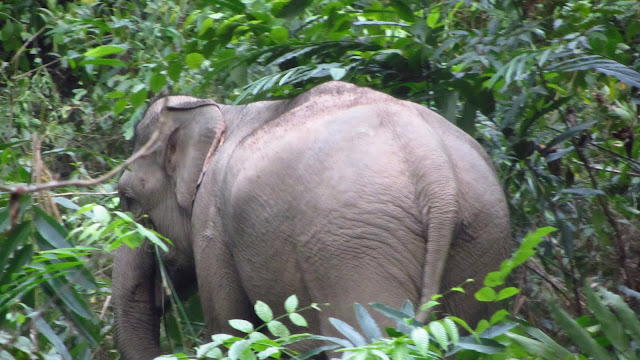 Trying to stay as quiet as possible, we watched as the elephants foraged around the area. After a few minutes, they retreated back out of view into the jungle.

Buzzing off our amazing elephant encounter, we went back to the guesthouse for dinner and drinks, swapping stories with other guests. After seeing these magnificent creatures in the wild, we promised each other to do what we can to help conserve wild elephants and started planning a volunteer opportunity at an elephant sanctuary in Northern Thailand.