We booked a 4-day jeep tour to the Salar de Uyuni, the world’s largest salt flats, while in Tupiza. This would be slightly different than the “standard” 3-day tour which departs from the town of Uyuni. Instead of spending the first day on the salt flats, our tour would culminate in us visiting them the final day, when we would have them entirely to ourselves and see the sun rise over this magnificent landscape. And instead of spending the final day high-tailing it back to Uyuni, we would work our way there from Tupiza in the South, allowing us to see a number of different things not seen on the typical tour.

We started the tour early on a Wednesday morning, when we were introduced to the Landcruiser 4×4 we would be spending most of the next four days. Our jeep would carried a driver, a cook, five of us and all our food, water, luggage and other supplies for the entire trip. Another jeep from the same company would be completing the tour with us, which was reassuring – there have been many accidents over the years and it’s a smart idea to have backup supplies and crew in case something goes wrong in this hostile, remote environment.

With all our supplies and bags tied down on the roof, we set off west of town, climbing up steep hills and getting one last look at the Wild-West type setting of Tupiza. Our first stop was at the Sillar, where the narrow ridge of two mountains came together forming a sort of saddle. Pointy, jagged rocks dotted the surrounding hills, covered with cacti and small shrubs. It was stunning, and unfortunately the small perspective offered by our camera lenses really does not do it justice. 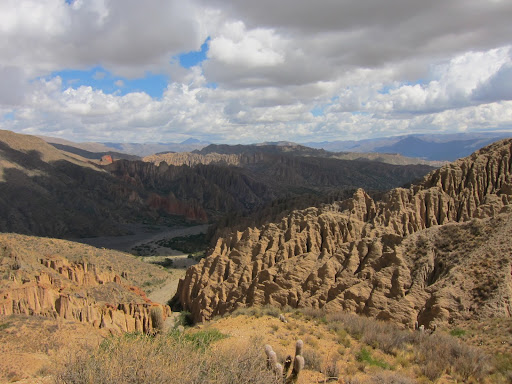 The landscape leveled off and turned into high plains as we continued driving along dusty dirt roads, passing llamas, donkeys, vicuñas, and the occasional lonesome settlement. 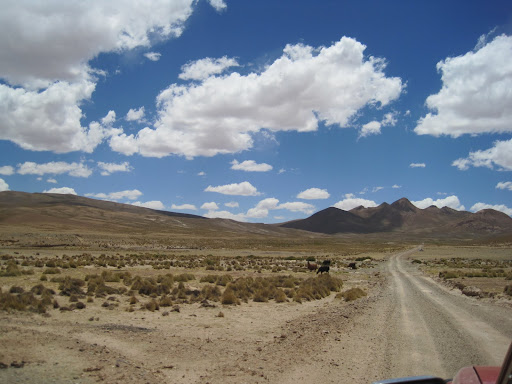 After lunching in a field surrounded by curious llamas, we continued on in the jeeps, breaking out of the high plains and back into mountainous territory. We stopped at the Paso del Diablo (Devil’s Pass), where wind from two directions met at the top of a mountain ridge covered in swirling sand. 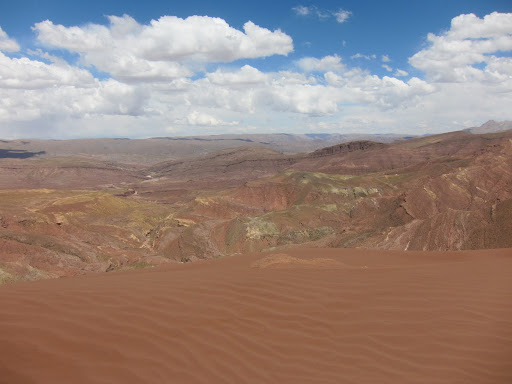 A jeep from another company got stuck in the soft sand, but was able to free itself after a lot of digging and pushing. 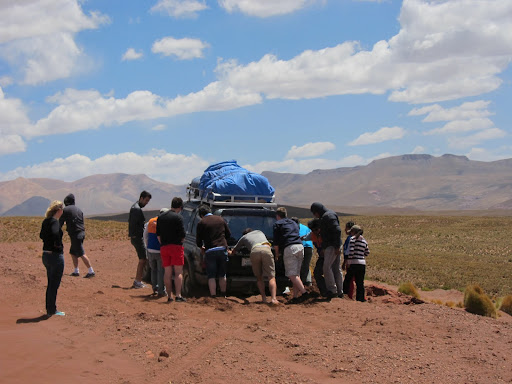 After a few more not as memorable stops and many more hours in the jeep, we finally pulled into the small village of San Antonio de Lipez around 6pm. They were celebrating some sort of festival, and everyone was crammed into the multipurpose basketball court/soccer field behind the school. While we were told the town’s generators would be turned off at 9pm that evening, loud music kept us awake as what seemed like everyone in a 100 mile radius danced and drank all night long. 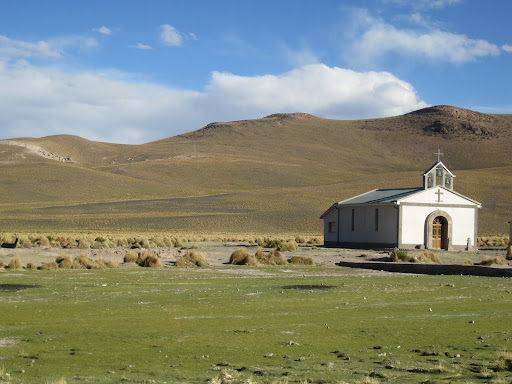 The next morning, everyone looked exhausted when the guides got us up at 5:30am. It was going to be a long day – the second day covers the most distance and makes many stops.

The first stop that day was at the Pueblo Fantasma (Ghost Town). This town was the site of the original San Antonio village we had stayed in the night before, and once housed some 1,200 people during colonial times when the Spanish were mining the area. The guide recounted some spooky stories the locals believe explain the town’s sudden abandonment and presence of spirits that haunt the place to this day. 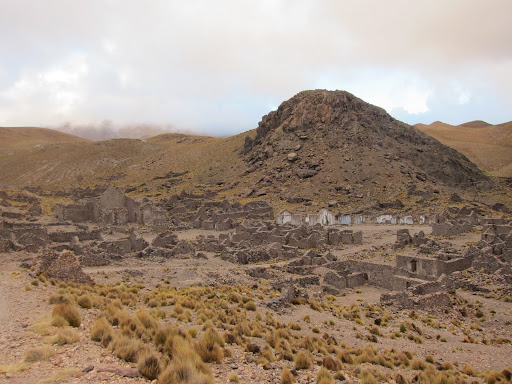 Next, we crossed into the Reserva Nacional Eduardo Avaroa, where we passed a number of interesting lagoons with various colors (due to the mineral content).

At the extreme southwest corner of the country, near the borders with Chile and Argentina, the 5,868m (19,250 ft) Volcan Licancabur stands proudly with the Laguna Verde and Laguna Blanca in the foreground. 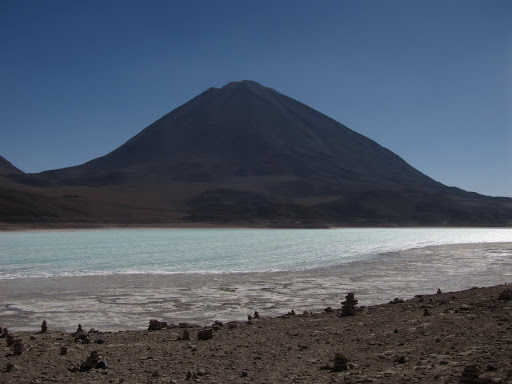 Laguna Verde is completely lifeless due to arsenic in the water, however many of the other lagoons host thousands of flamingos, feeding on red algae, which gives them their pink color. 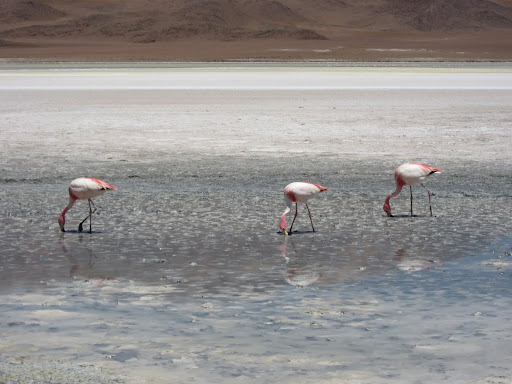 We stopped at hot springs near Laguna Blanca. They were a nice change after dealing with the biting cold wind and low nighttime temperatures in this high-altitude desert (ranging from 4,200m to 5,200m or 13,800 ft to 17,000 ft above sea level).

Lunch that day was next to the Laguna Kollpa. Here, workers extract the natural “kollpa” mineral from this lagoon, which is used as a detergent. We filled a plastic bag with it, hoping to save on laundry detergent, though unfortunately it smelled like bird poo and we were a little afraid a big bag of white powder might raise eyebrows at our next border crossing. 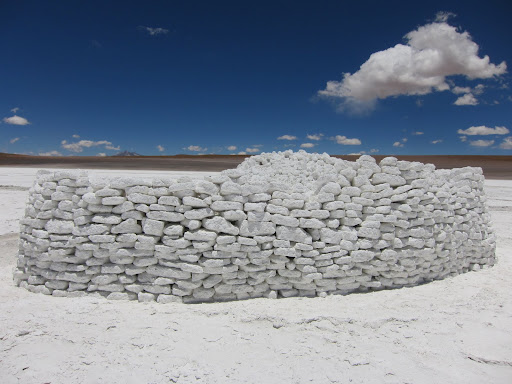 Our final stop that day was at the Sol de Manana Geysers, where we cautiously walked between bubbling, hissing, spitting pools of mud. They were amazing, though we were scared to be so close – especially after a geyser hit Heather in the back with a hot ball of mud while she was posing for a photo! 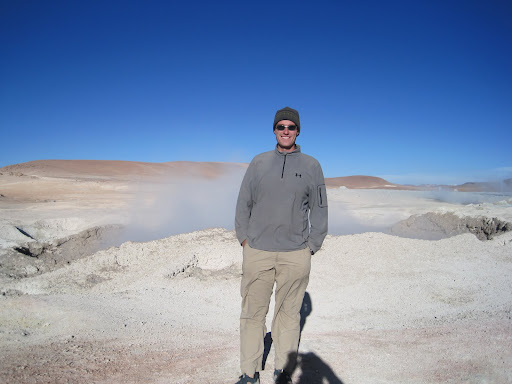 After a long second day, we were happy to make it to the refuge, where seemingly every single jeep doing the salt flat tour had stopped (we were now following the standard circuit). Despite being in the middle of nowhere, it was surprisingly comfortable and we enjoyed “sleeping in” until 6am.

The third day, we crossed another desert which had many large rock formations strewn about in the sand. These rocks ended up here from nearby volcano eruptions, and had been sculpted over the years by the high winds and sand in the area.

The most famous of these is the Arbol de Piedra (Tree of Stone), which made a good photo opp. 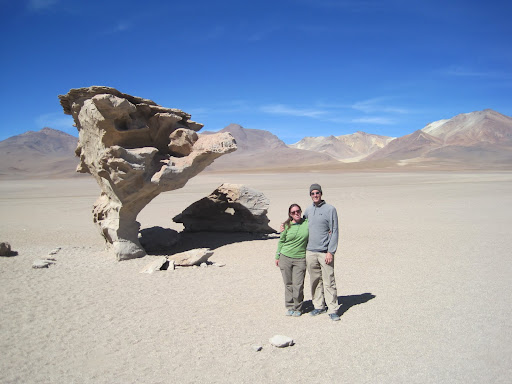 We saw more lagoons, such as the large red-hued Laguna Colorada and a series of five smaller lagoons, which were all in a row.

After hundreds of kilometers of travel, we were finally ready for the main attraction -the Salar de Uyuni salt flats!

1 thought on “Volcanoes, Lagoons, and Ghost Towns in the Deserts of Southwestern Bolivia”