We arrived in Leon after three nonstop days of bum-numbing travel from the Utila Cays. The journey involved one very scary speedboat, a ferry, three taxis, three buses, a six hour traffic jam, and two overnight stops (La Ceiba and Tegucigalpa). Understandably, we were happy to arrive in Nicaragua – the land of lakes and volcanoes – our fourth country.

True to its country’s nickname, Leon is surrounded by a number of volcanoes, many of them still active. One of these, Cerro Negro (Black Ridge), has recently become very popular on the backpacker trail as a place where anyone with the desire to can climb to the top and descend on a small wooden board at breakneck speeds.

We signed up for a tour with Bigfoot Hostel, which first started offering this activity five years ago, when the owner from Australia saw the smooth black sand of Cerro Negro and thought it would make a great spot for sand boarding.

On a clear, sunny morning, a group of about 20 of us climbed into the back of Bigfoot’s truck for the very bumpy ride out to the volcano. As we left the city and rolled into the countryside, we noticed the soil getting blacker due to the surrounding volcanoes. After a short while, the vegetation began to disappear, the truck stopped, and we found ourselves at the base of the volcano. 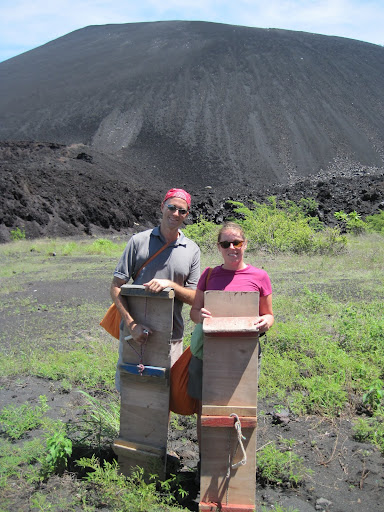 Cerro Negro is the youngest volcano in Central America (formed in 1850) as well as one of the most active. It last erupted in 1999 and many say it is now overdue to erupt again. Every volcano forms and acts differently – Cerro Negro is unique in the fact that eruptions from the crater spew ash, which collects on one side, while lava flows from the base. This fine, black ash creates the perfect conditions for volcano boarding. 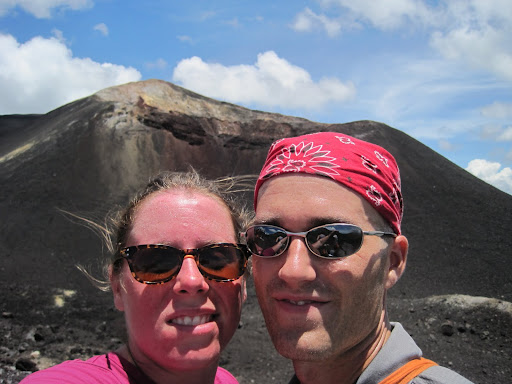 Back at the truck, we each grabbed a board, orange jumpsuits, and goggles, before beginning the hike approximately 1000 vertical ft to the top. The loose rocks, steep incline, and heavy boards made the hike a bit of a challenge, though we did make frequent stops for the guide to talk about the history of the volcano and point out features, such as the craters and lava fields. 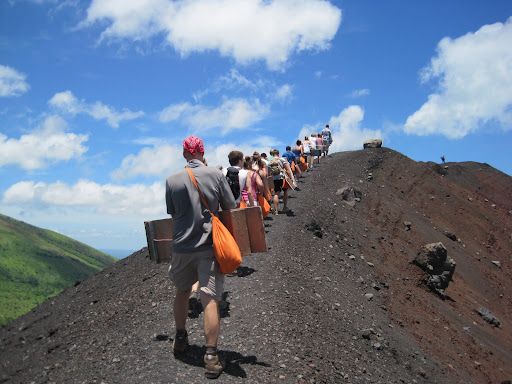 After about 45 minutes, we made it to the top, snapped a few pictures looking down into the old and new craters, and were given an instructional briefing from the guide. While we would each be using identical boards going down the same runs, it would be possible to control our speed by digging our feet into the ash and shifting around our weight. Reassuring as this may have been, we were still nervous looking down the steep slopes of the volcano. 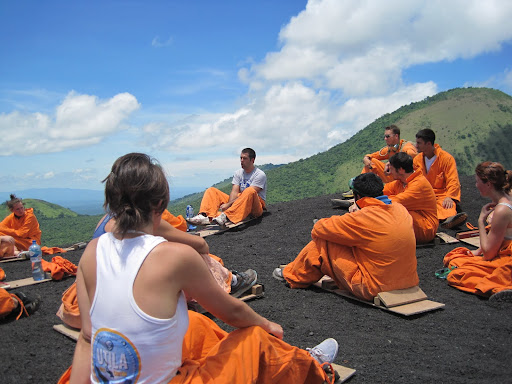 As luck would have it, Heather and I ended up last in line to head down. We watched as boarders descended two by two down parallel “tracks.” There were a lot of crashes, especially as people built up speed where the incline got steeper. Watching all these wipeouts (some fairly spectacular), those of us at the back of the line got more and more nervous. When it was time for one girl to go, she started crying, asked to walk down, and had to be escorted by an assistant. 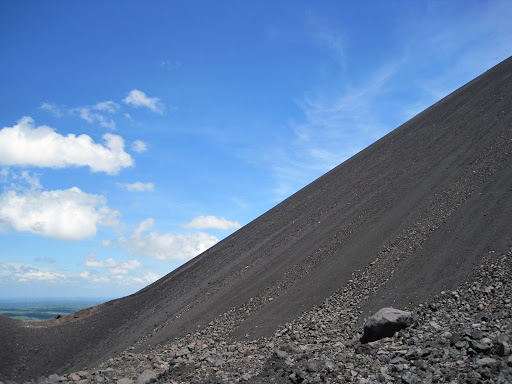 Finally, it was our turn. The guide counted us down, then we lifted our feet off the ground and into the board, and started building speed. I zoomed past Heather (who was taking it slow with her feet dug into the hill), and accelerated to a point where I was flying down at a good clip, yet still felt like I had control of the board. All the while, black ash and small rocks were whizzing past my head, making a loud scratching sound. While it was tempting to open my mouth and scream, we had been instructed to keep them shut to prevent them from filling up with ash!

You can watch a video of my descent below:

After sliding to a halt at the bottom, I was given my speed by Bigfoot’s truck driver, which was clocking us with a speed gun – 35 km/h. I was pretty much middle of the pack that day, with the top boarder hitting 75 km/h (still below the all-time record of 82 km/h set by the assistant who had to escort the crier down the volcano). We were unable to get Heather’s speed – the driver claimed she was going too slow and estimated it at 15 km/h! She was happy nonetheless to have conquered the hill, making it down in one piece. 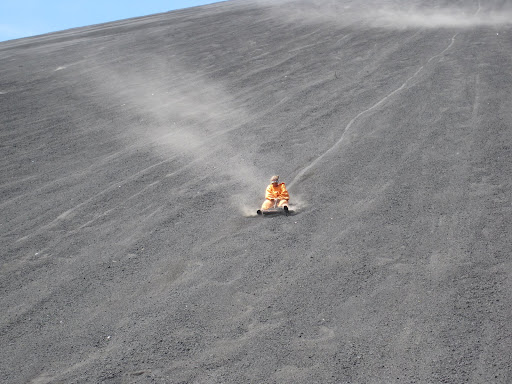 Bigfoot provided a free beer after the run, two free mojitos back at their bar, and a souvenir T-shirt. The excitement definitely took a toll on us; once we made it back to our hostel we took long showers and collapsed. Despite the heavy scrubbing, we were still finding small rocks and black sand behind our ears (and other places) for days afterwards. 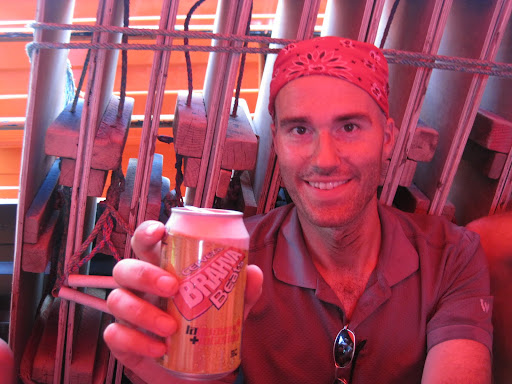 You can view all our photos from Leon in our photo gallery.