I got to Jodhpur as the sun was setting, tired from the journey and still suffering from a persistent case of traveler’s tummy I picked up in Agra. After reading some reviews on Wikitravel, I decided to try my luck at Hill View Guest House. As the name would imply, it sits near the top of a hill. And not just any hill, but the huge hill dominating the city of Jodhpur, which hosts the imposing Mehrangarh Fort at its peak.

After getting a little lost following the narrow paths up the hill, a friendly local eventually led me to Hill View, where I was given the option of a few different rooms, eventually settling on a cozy one with a fantastic view. 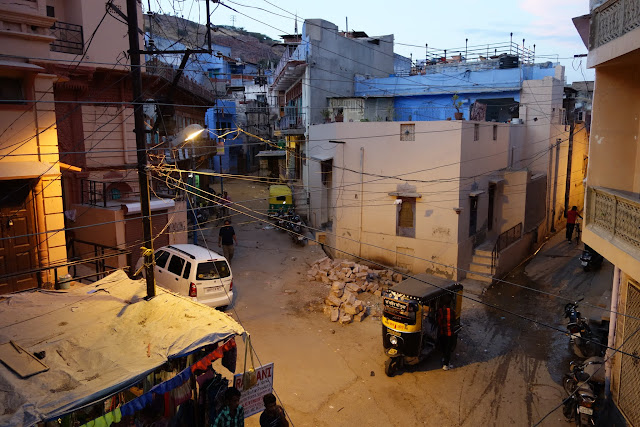 Not being in any mood for real food, I ordered toast with honey and some chai from the guest house’s open-air restaurant, soaking in the nice view and twinkling lights of the city below. 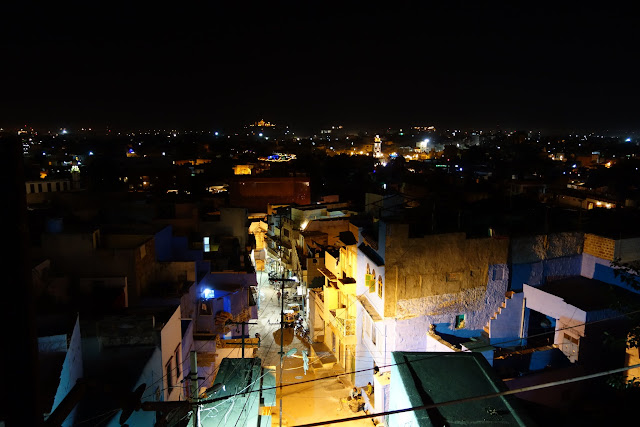 One of the friendly family members that runs the guest house got chatting to me and pointed out the Umaid Bhawan Palace lit up in the distance. It is one of the last palaces built in India, completed in 1943, right before independence from Britain and the integration of the Maharajas’ territories into the new Republic of India. The current Maharaja (King) of Jodhpur lives here with his family. Perched high on a hill with 347 rooms, it is one of the largest private residences in the world. 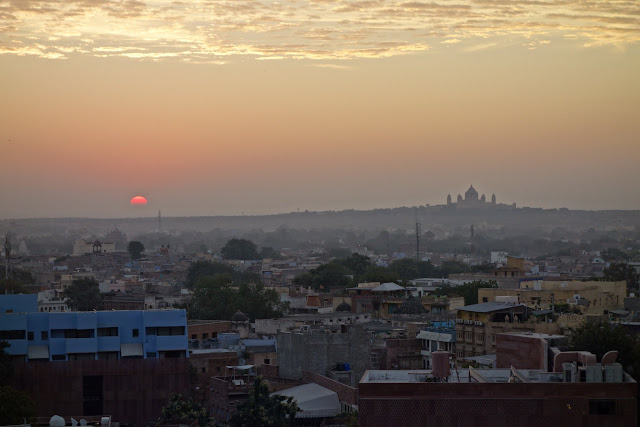 The next morning, I awoke to a beautiful sunrise, the local mosque’s call to prayers, and a fantastic panorama of the city from my room’s big window. While I was still a little under the weather, this was the first place in India that felt relaxing. I had been in India a little more than a week, but all in big cities – Jaipur, Agra, and Delhi. While Jodhpur is a city (Rajasthan’s second largest), it isn’t as full-on as the other ones I had been to. Jodhpur, was just what I needed. 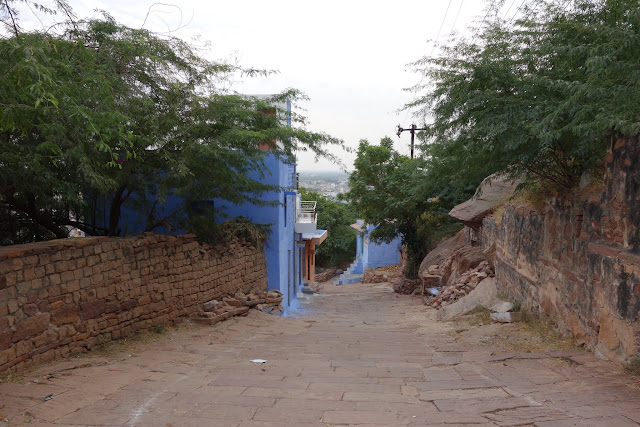 After a late breakfast, I followed the path next to the guest house, around the Mehrangarh Fort’s walls to the entrance. 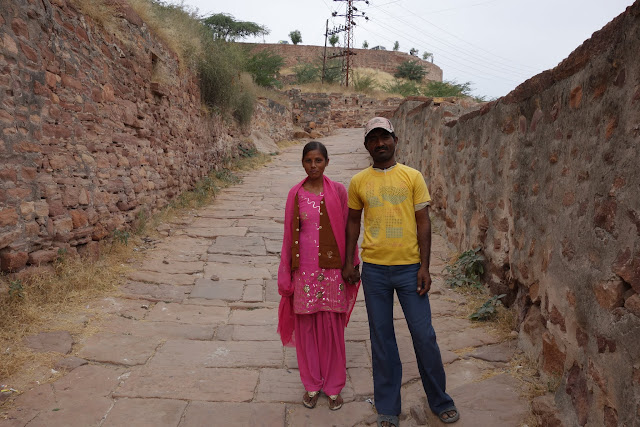 Any traveler to Rajasthan will quickly come to realize one thing in no short supply around here are forts and palaces. These lands were fought over and controlled by a series of rich and powerful rulers, capitalizing on their ideal position between the Middle East and the Orient. These Maharajas lived a life of unthinkable luxury, getting transported on elephants and palanquins, hunting rare and wild animals, and building over-the-top palaces, defended by a series of imposing forts. 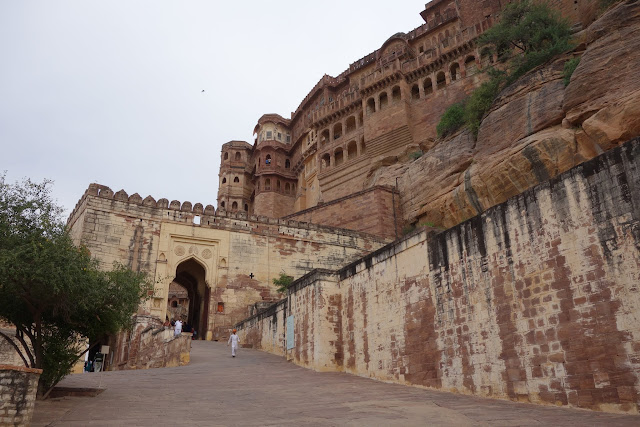 I had already seen a number of these fort-palaces, but Mehrangarh Fort was truly one of the most spectacular.

For a start, there is the view. Jodhpur, nicknamed the “Blue City”, with its bright-blue colored houses dotting the hillsides. In the distance, the Thar desert stretching out towards Pakistan. 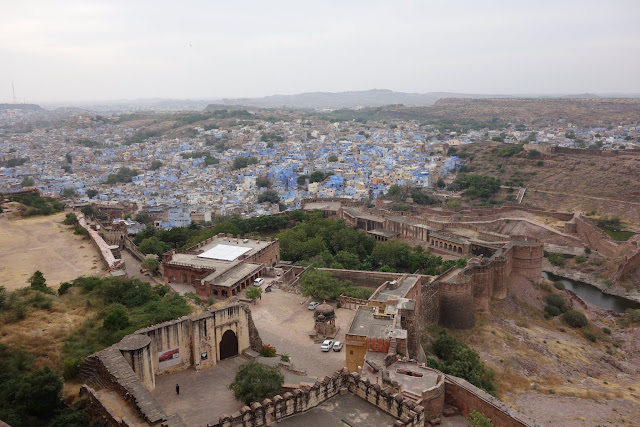 The fort itself is built right into the cliffs of the hill, with steep walls and high towers. Its thick walls and strategic location are part of the reason the fort was never captured by enemy sieges. 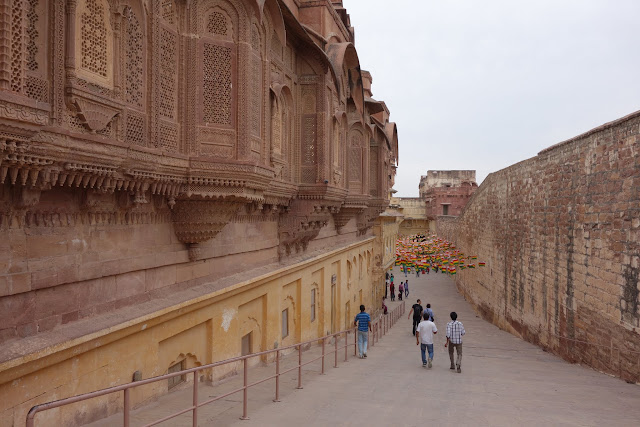 The inside rooms are just as magnificent as the exterior. Latticed windows, stained glass, walls covered in mirrors, courtyards, and balconies can be found throughout. 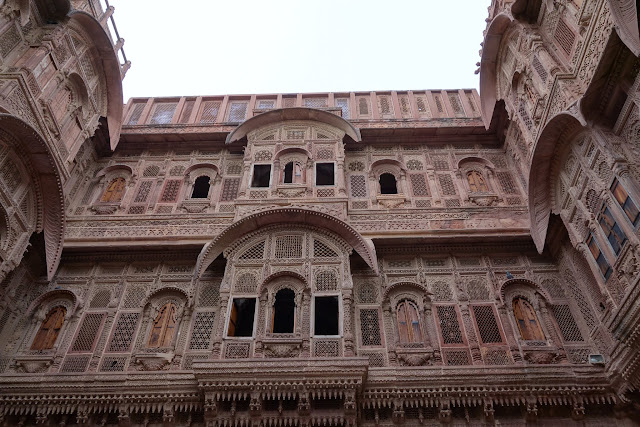 An audio tour, narrated by the current Maharaja of Jodhpur, guides visitors through the fort. 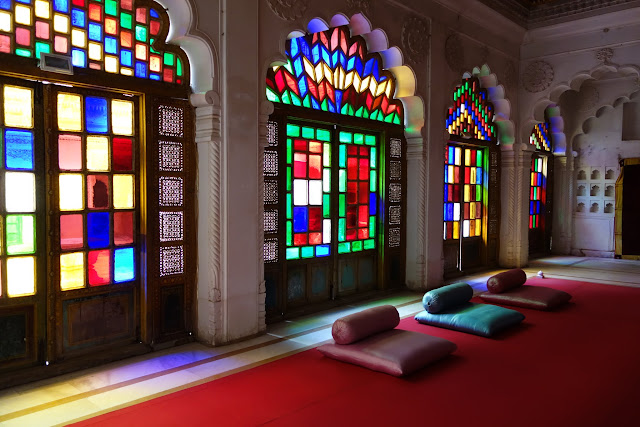 Demonstrations are also held, providing a glimpse into the lives of the royal family and their servants. 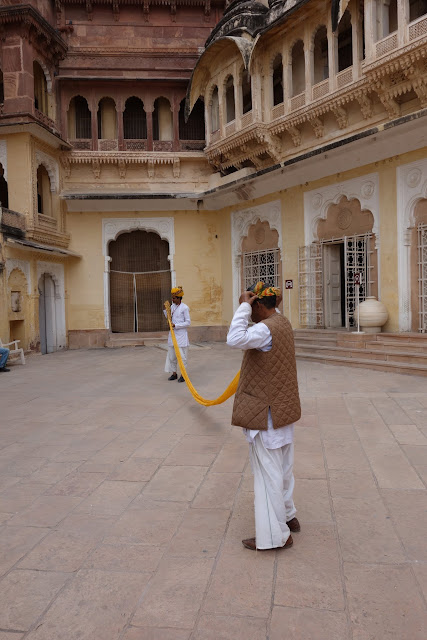 While there are a lot of forts in Rajasthan, Jodhpur’s Mehrangarh Fort is one of the best. I’m glad this was one of the earlier palace-forts I visited, as I would soon become tired of them.

1 thought on “Visiting Jodhpur and the Mehrangarh Fort”