The “Enchanted Islands” of the Galapagos took our breath away. These gorgeous, virtually untouched islands are home to some of the rarest, most amazing creatures on earth. Many of these animals are endemic to the Galapagos, meaning they cannot be found anywhere else. A natural lack of predators has left the animals curious and unafraid of humans, allowing visitors to have amazingly close encounters. Unfortunately, this also makes the native wildlife susceptible to species introduced by man, such as rats, cats, dogs, goats, pigs, and invasive plants. Nearly 98% of the archipelago is tightly controlled as part of a national park, and was declared a UNESCO World Heritage Site in 1978.

The Galapagos are perhaps most famous as the inspiration for Charles Darwin’s theory of evolution and natural selection, with the unique geological features responsible for different species of the same animal unique to each island. 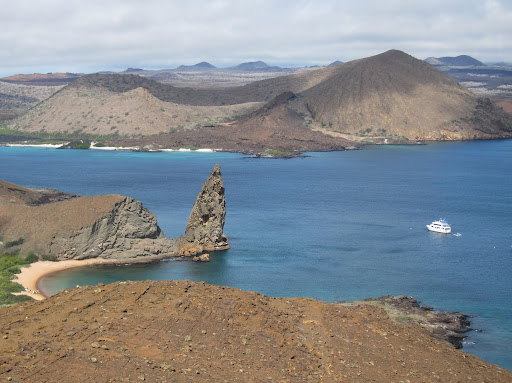 Here is some of the wonderful wildlife we encountered while in the Galapagos:

These sea lions were absolutely adorable and were extremely curious and friendly. Some even waddled right up to us and sniffed around. 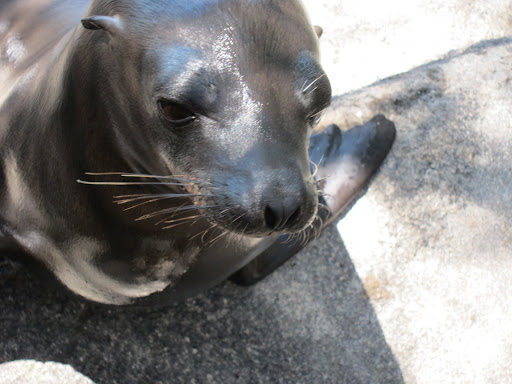 We came upon a family of sea lions playing in a small pool along the shore. It was so touching to see a baby sea lion calling out for its mother and her calling back in return.

During one snorkeling excursion, we were lucky enough to swim with a large group of these cuties, which circled around playfully and later followed our Zodiac back to the ship. 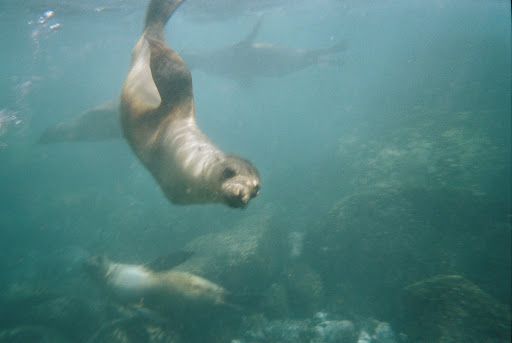 Although we saw these guys on Isla de la Plata (aka “Poor Man’s Galapagos), it was fun to see these blue-footed birds again whistling and waddling about. 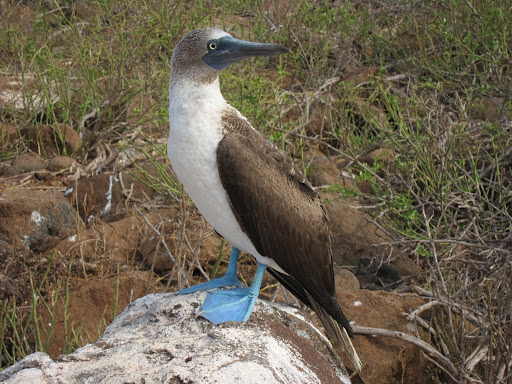 The male frigate birds are the main attraction of this species, since they inflate their red throat sac as a way of competing in attracting a female. These huge black birds are considered the “pirates of the skies”; instead of hunting for their own food, they steal the fish caught by the blue-footed boobies. 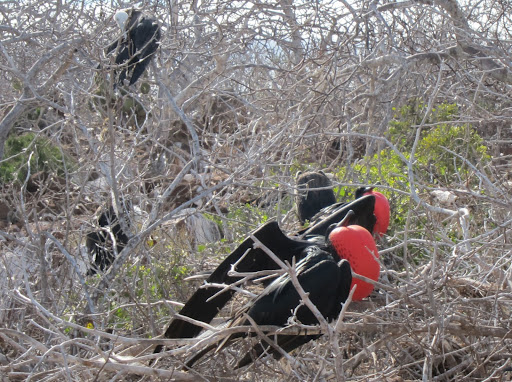 The number of massive land iguanas on the islands has been declining for many years, most likely due to the introduction of new species. We were lucky when we managed to get a good look at this one on the beach. 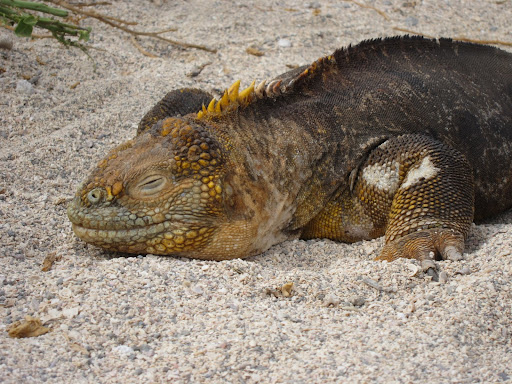 These gnarly creatures were in abundance on many islands, oftentimes in groups of hundreds, and gave off a very potent odor. They can swim, but are usually seen soaking up sun and spitting on the shore or clinging to rocks as the waves crash on their backs. After snapping hundreds of photos of them, we had to stop ourselves from taking any more. 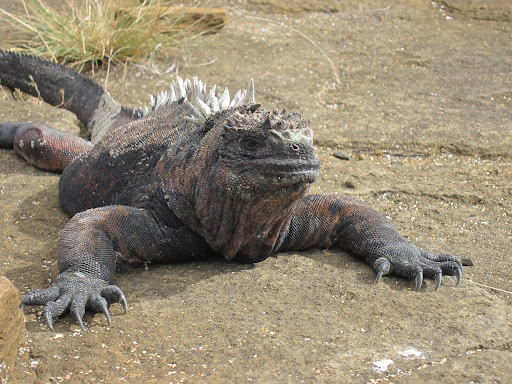 These bright red and orange crabs were so colorful and made for some great photos. We saw many of these on the islands, but they are quite shy and often scurried away. 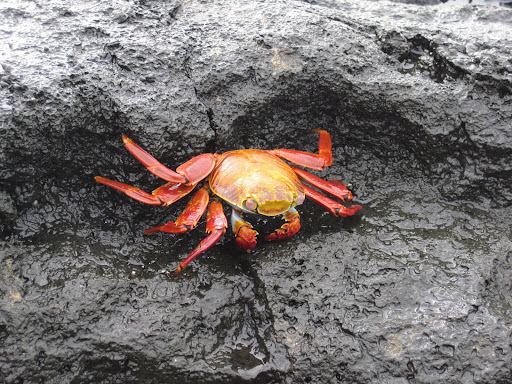 We actually snorkeled with a couple penguins and later saw four of them on a rock. We were a bit disappointed we didn’t see more penguins. 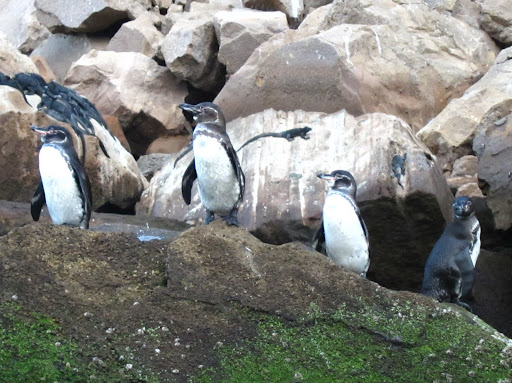 It was incredible to snorkel with dozens of green sea turtles. After seeing sea turtles like these in Tortuguero, Costa Rica, it was a thrill to be swimming among these graceful giants. 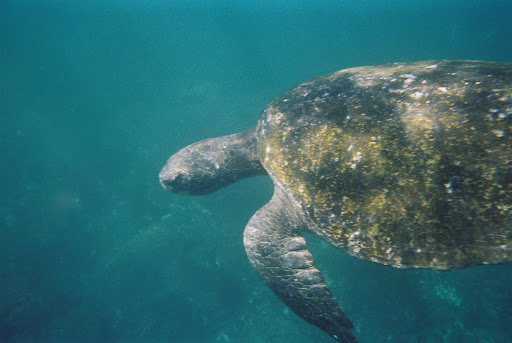 During one walk, we were fortunate enough to see a rare moment when a young sea turtle briefly came ashore to sun itself for a few minutes. The turtle did not yet have the aged green shell, but a fresh rust colored coat. 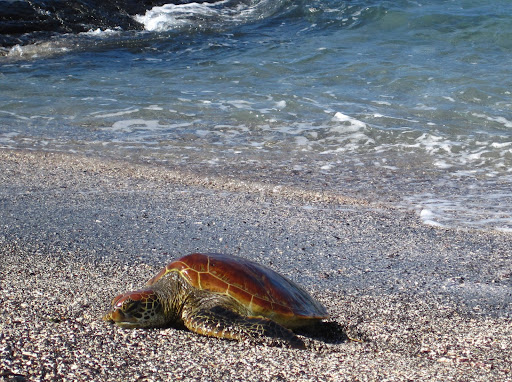 These gargantuan tortoises can live upwards of 150 years. They make a strange hissing sound from their muscles when they feel a bit nervous. I liked their elephant-like feet. 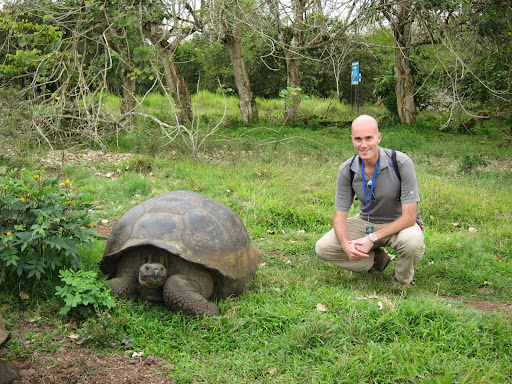 As their name implies, these black birds are unable to fly and are often found drying their short wings in the sun on the shore. 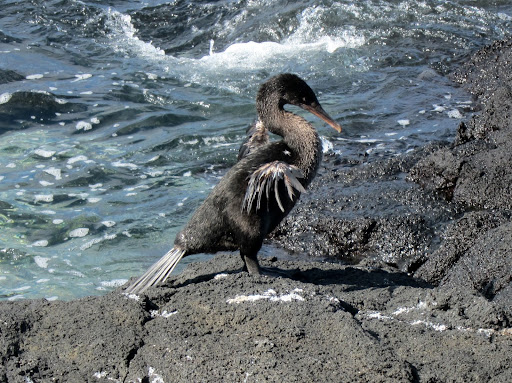 Our visit to the Galapagos Islands was definitely one of the highlights of our journey so far. The entire time we were on and among these incredible islands we felt so lucky to be there and it is definitely a place we would love to visit again. The volcanic remains of the islands themselves, the incredible wildlife, the gorgeous waters – all combined to create an unforgettable experience that we will always treasure. If you ever get the chance to visit these “Enchanted Islands,” do so because you may never see anything like it again.

You can see more photos from the Galapagos in our photo gallery.

1 thought on “Up Close & Personal with Wildlife in the Galapagos”

A bathroom on the London level of Terminal 21 shopping mall, made to look like an Underground Station.04-Mar-2012 20:00
View at Picasa