Every year, thousands upon thousands of green, leatherback, hawksbills and loggerhead turtles nest on the beaches of Tortuguero, Costa Rica. This remote location on the northeast Caribbean coast is now a national park and the largest nesting site for green turtles in the western hemisphere.

Obviously, timing is crucial when planning a trip here. Luckily, we were heading to Tortuguero in the middle of the green turtle season, which runs from July through October.

Our trip began with a visit to a banana plantation, owned by Del Monte. Coincidentally, we visited the plantation the same day Erik’s Calorie Count article on bananas was published. We got to see the fields of banana trees, the human-powered “banana train” used to transport the banana bunches to the washing and sorting station. We also got to hold a piece of sugar cane on which sat the largest beetle I’ve ever seen in my life – a rhinoceros beetle. We stopped at a cool garden where we saw various species of colorful frogs, butterflies, flowers and our first howler monkey! 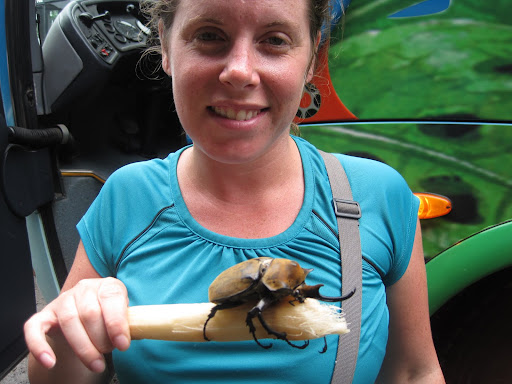 Tortuguero is very remote – and getting there without using a plane is a long, difficult process. After the two hour drive on unpaved roads, we hopped on a small boat which took us through the canals. Along the way, we saw a cayman sunning itself on the shore. We also saw a sloth, (pink birds), horses, capuchin, howler and spider monkeys, and several tropical birds. 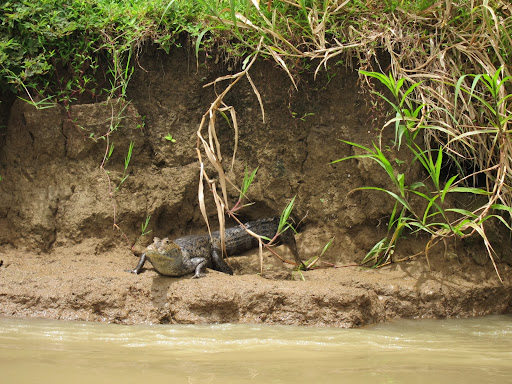 Our lodge was smack in the middle of the jungle and the huge screen windows that flanked our room helped us feel like we were a part of it. As we left for dinner, we saw (and heard!) about 15 monkeys swinging from the trees just above our room! 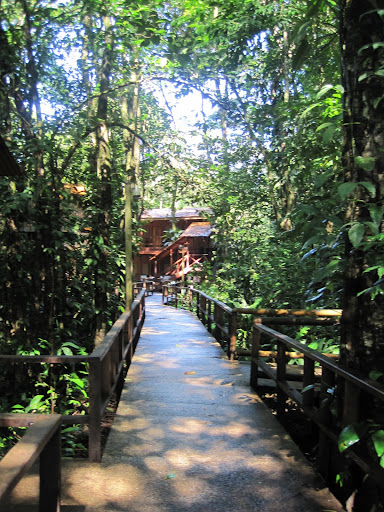 The first day, we were given a tour of the beach where the turtles lay their eggs. There, we could see the tracks and nests from turtles that had laid their eggs the night before. These holes were huge and got us excited about the possibility of seeing turtles nesting that night. 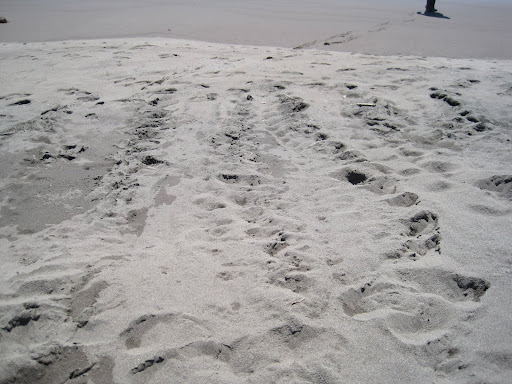 After grabbing dinner back at the lodge, we hopped back on a boat at 8pm for our one shot at seeing turtle’s laying eggs. Since nearly all of these sea turtles are highly endangered, their nesting grounds are protected at night. In order to see the turtles, we had to pay an additional $30 each to join a group with a guide for a two hour period. Our guide walked us to the section of the beach we were assigned to by one of the park’s rangers. Groups cannot exceed 10 people and the group is only given a 2 hour window to see these amazing creatures dig their nests, lay the eggs, cover them, and return to the ocean. Turtle spotters with walkie-talkies find a turtle and call their assigned guides to bring their group to the place where the turtle is nesting. This process is very strict and organized, but of course, there is no guarantee you will see even one turtle. In fact, our guide told us that just the night before, her group was on the beach for a full two hours before they saw their first turtle, which they could only observe for a few minutes before maxing out their assigned two hour window. 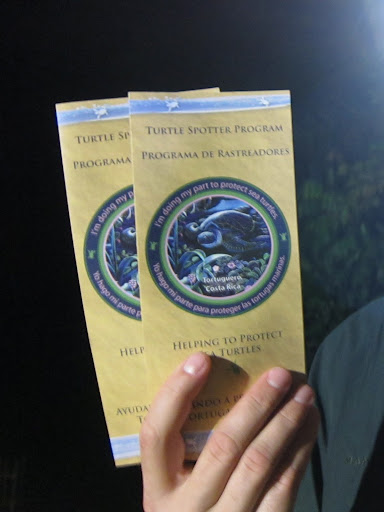 A few minutes after we got near our assigned section of the beach, our guide received word of a turtle nearby. We ran with our flashlights to the spot, where we entered the beach with flashlights off and -very sadly – no cameras. Any light can distract turtles from their path and may cause them to abandon their eggs before covering them with sand or even from laying their eggs altogether. Our guide and the spotter helped us enter the beach area with red flashlights that are less distracting to the turtles. Straight away, the first thing we saw was a huge turtle heading back to the sea. At one point, even the red flashlights of one of the guides distracted the turtle and she started to head back inland before it was shut off. We saw by moonlight the huge green turtle return to the sea, our group following right behind it. Soon after, we saw another turtle climbing up to start nesting. At points, we saw about four turtles.

The best moment was when our group of eight nestled up within a few feet of the turtle to watch her lay her eggs. It was incredible. She laid about 50 ping-pong sized eggs before our eyes, pausing a few times. It was amazing to be so close to this creature and watching an instinctive and crucial part of the survival of their species. The turtles somehow always return to the very same place where they were born to lay their own eggs and the cycle continues. Unfortunately, wild dogs and poachers often steal the eggs and destroy the nests, exacerbating their endangered status. 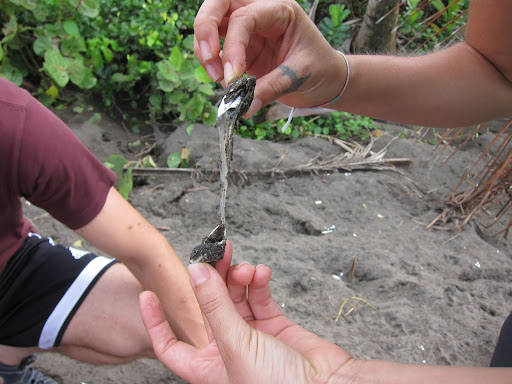 We were lucky to have our turtle all to our small group of 8 because in the past, 80 people were allowed to view one turtle. We stayed to see her cover up her eggs and even got sprayed by sand from her hind flippers! We also saw her dig a false hole, as all turtles do, to try to confuse predators and increase the survival of her offspring. The statistics are shocking and sad – something like only 1 out of every 100 hatchlings will ultimately survive.

Tortuguero was jam-packed with nature and we were so happy to have experienced it. We will never forget witnessing the magical instinct of these mystical sea turtles as they strive to continue their cycle of life.

You can view more photos from Tortuguero in our gallery.