Bolivia is home to some strange and scary tourist attractions. We’d already toured a working prison and gone mountain biking down the World’s Most Dangerous Road, but there was still another famous site left to visit – the depths of hell in the Potosi mines.

At one point in time, the Cerro Rico mines in Potosi held the world’s richest deposits of silver. The colonial Spanish extracted a huge amount of it, mostly through the use of cruel slave labor (an estimated 8 million Indians and African slaves died in the mines during the colonial rule), contributing to the great wealth of their mighty empire. While most of the silver was shipped back to Spain, Potosi flourished along with the mines, quickly gaining importance as one of the most important cities in the New World. 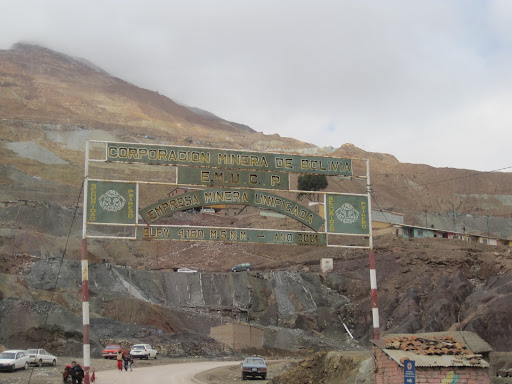 Over time, though, the deposits started to thin out. Miners began removing Tin, Zinc and other minerals, but with lower margins and depleting reserves, the grand wealth and prestige Potosi once held began to disappear. The state-run mining company which controlled the mining operations shut down, and handed over the mines to a miners’ co-op. Without the backing and resources of a major company, the miners went back to working the mines the old-fashioned way, bit by bit, in a desperate search for what little mineral deposits were left. The mines still operate this way today, using primitive techniques and technology that is hundreds of years old.

Working in Cerro Rico is dangerous; there are frequent accidents, including cave-ins, and the miners are exposed to fine dust in the air along with toxic chemicals, such as asbestos and arsenic. The dust causes silicosis in the lungs of almost every miner – most don’t live past age 40.

We began the tour by visiting a storehouse, where we were given protective clothing, boots, helmets, and lamps.

Next, we were taken to the Miner’s Market, a stretch of stands and shops selling everything from gloves and goggles, to dynamite and coca leaves. The coca leaves are particularly important to the miners as they help keep them alert, reduce their appetite, and limit the effects of the poor air and high altitudes (Potosi is one of the highest cities in the world at over 4,000m or 13,000 ft above sea level). We bought a bunch of items to offer as gifts – bags of coca leaves, soda, gloves, along with dynamite kits consisting of the dynamite itself, a fuse, and detonator. 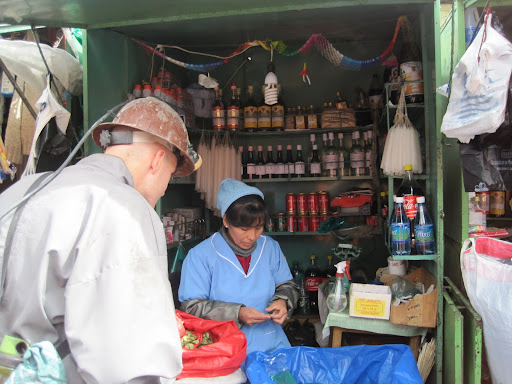 While in the market, we also sampled some of the strong alcohol which the miners drink. Even though we only tried a few tiny drops, it burned its way down our throats.

Finally, it was time to head to the mines. We boarded a bus and began ascending Cerro Rico. This rather unattractive mountain, scarred from hundreds of years of nonstop mining, looms over Potosi below.

We formed a line and passed through the entrance, following the narrow-gauge wagon tracks into the blackness. 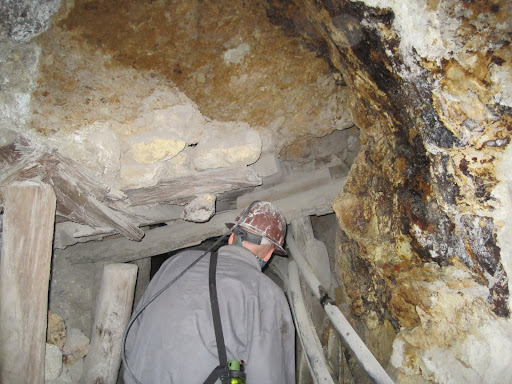 While we had bandanas covering our mouths in a futile attempt to avoid breathing dust, after only a few minutes it was nearly impossible to breathe and we begged our guide for a break. 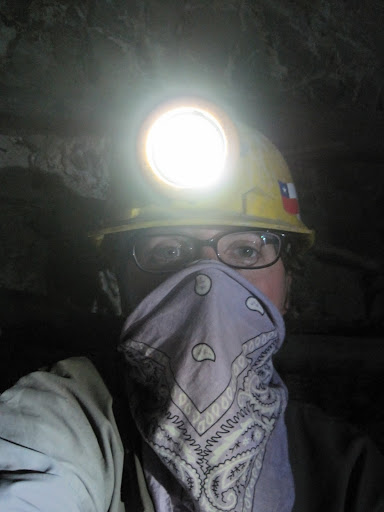 As we were catching our breath, we met some miners passing through, handing off some of the gifts we had purchased at the Miner’s Market. 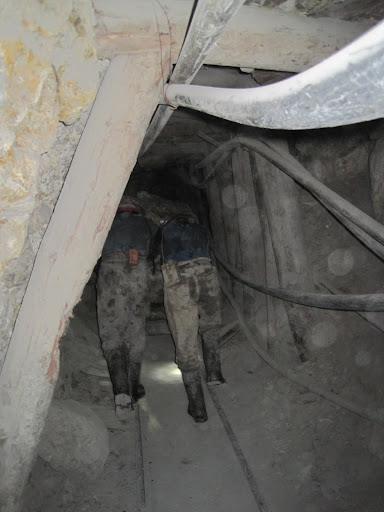 After a few minutes rest, we continued working our way into the depths of the mine. The tunnel narrowed and the wagon tracks eventually disappeared as we veered from the main section. In some parts, hastily-assembled wood braces held together the walls and ceiling. 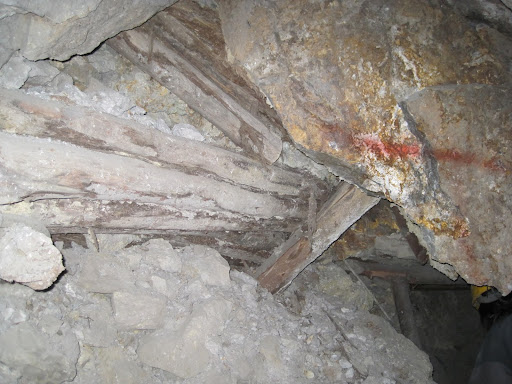 Our guide, an ex-miner, threw out occasional warnings which added to our nervousness.

In a crumbling part of the tunnel he said “don’t touch the ceiling here, it could cave in.”

Later, as we were looking at some strange formations in the ceiling, he told us “those spots there are arsenic.”

In a couple tight spots, we had to climb down ladders, or crawl on all fours, or shimmy down small shafts. 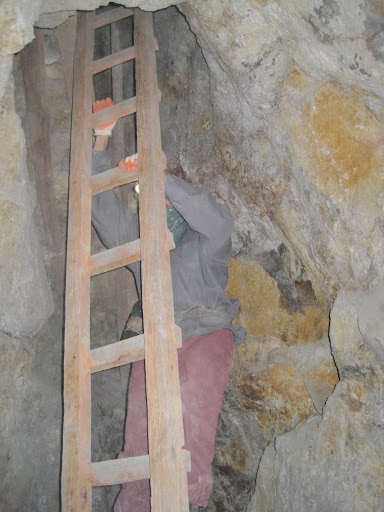 Once we had descended to another main section, we had to stay alert for the wagons running up and down the small tracks, which two to three miners at a time push at high speed while running through the tunnels. As they approached, we ducked to the sides of the tunnel to let them pass.

We stopped in one area where they were filling up a wagon, and I tried helping out by shoveling some of the rubble off the tracks. It was difficult work and very tiring, but the miners shoveled away as if it was a walk in the park.

All the mines in Cerro Rico have a “Tio,” a statue which looks like the devil that the miners believe controls the fates and fortunes of the mine. They make sacrificial offerings to this devil, such as coca leaves, alcohol, and lama fetuses. While God may rule above ground, the devil Tio is in charge here and these sacrifices are attempts to have him ensure their safety and offer them rich deposits of minerals. 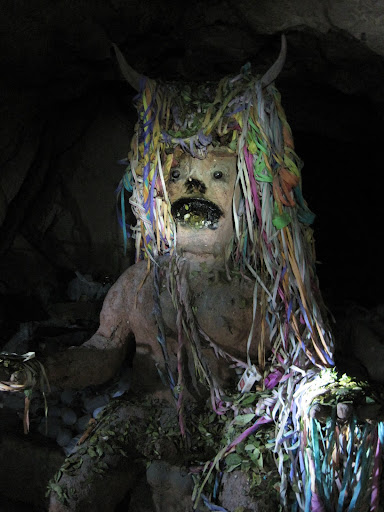 After about two hours, it was time for us to head back into the real world. As we approached the tunnel entrance, the air got cooler and fresher. Finally, we saw the proverbial light at the end of the tunnel.

We squinted as we came back into full daylight, relieved to have made it out of the Cerro Rico mines alive. 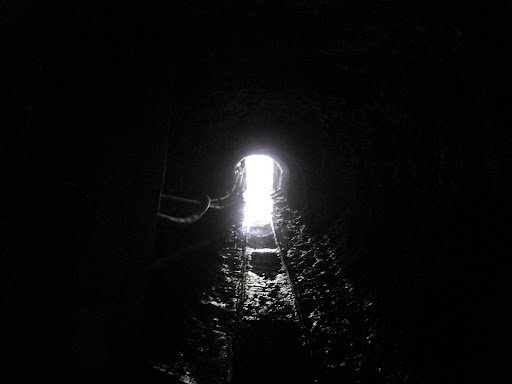 It’s unfathomable how the miners do this back-breaking job, day-in day-out, year after year. Many of these miners start this line of work while still children, working their way up the ladder while supporting their families from an early age. An excellent documentary movie showing the conditions of the mine and some of the stories of the children is The Devil’s Miner; we saw this in a bar in Sucre before heading to the mines. Our guide told us that the 14-year old child shown in the documentary (now age 20) is still working in these same mines.

2 thoughts on “Touring the Potosi Mines in Cerro Rico”