We woke up early for a 6am shuttle to the Mexico-Guatemala border, sad to say goodbye to our first country, but excited to be moving on to Guatemala.  Having researched the border crossing ahead of time, we were prepared for a long day.  Despite the fact that the point to point distance from Palenque, Mexico to Flores, Guatemala is less than 150 miles, the journey took 11 hours, involved crossing the river dividing both countries in a small lancha (motorized longboat), crossing miles of unpaved bumpy Guatemalan “highway”, and a flat tire.

Somewhere along this journey, we got talked into booking the next day’s 4:30am tour to the main reason anyone bothers to make this trek – the ancient Mayan ruins of Tikal.  While it might have seemed like a classic mistake to book our tour without shopping around, in the end it turned out to be an amazing, eye-opening tour we’ll never forget. 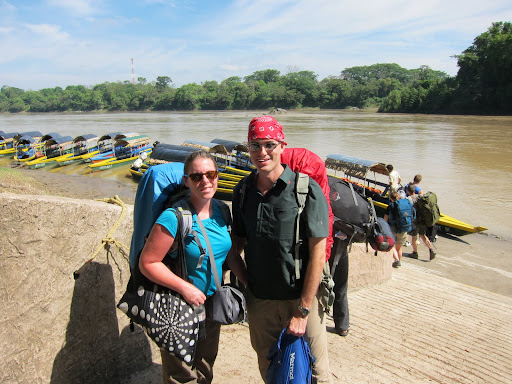 Bright and early the next morning, we were en route to the national park, arriving for the 6am opening.  It’s best to visit Tikal as early as possible for a few reasons 1) avoiding the throng of tourists crawling all over the site 2) enjoying the (relatively) cool temperatures before the baking hot sun rises and 3) experiencing the surrounding jungle come to life as the wildlife awakes.

Tikal was one of the largest cities in the pre-Columbian Americas, and the scale of this site is absolutely massive.  According to our guide, Luis, only 15% of the structures have actually been excavated.  Many other pyramids, temples, and other buildings remain under mounds of earth, covered by the lush tropical forest.  Caitlin, my archeologist sister, needs to drop in with her trowel and brush – there’s a lot of work to be done! 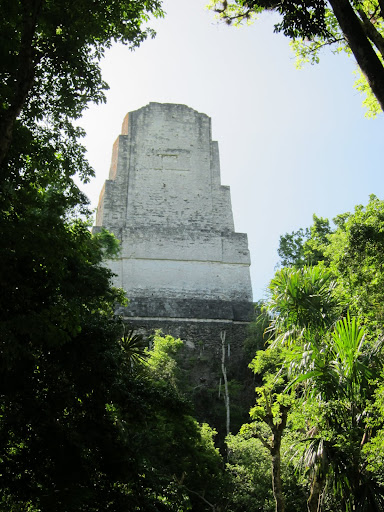 Luis grew up on the grounds of Tikal, sharing the sort of knowledge only a local can provide, and was completely, utterly nuts.  He started the tour by grabbing a twig and coercing a tarantula out of its hole.  After sticking it in his mouth and offering to put it on us, I volunteered Erik, which made for a great photo-op. 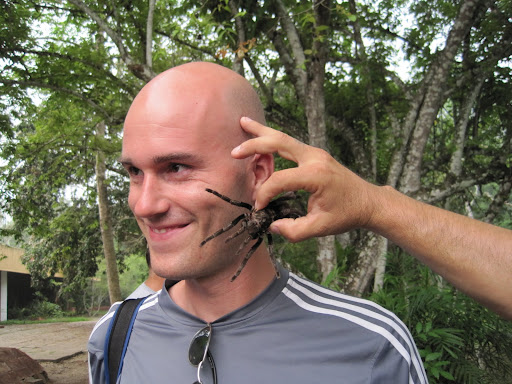 Throughout the day, Luis showed us monkeys, toucans, leaf-cutter ants, amazing tropical plants, herbs, and trees.  He howled and grunted at the monkeys and shook their trees, forcing them to howl back and run above us through the trees (as Luis warned – they occasionally dropped pee and poop on the group, marking their territory). 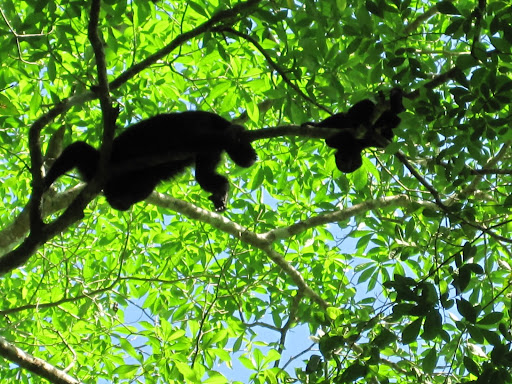 Then of course, there are the ruins themselves.  Through the holes in the trees, huge temples and pyramids rise above the jungle canopy.  It was a beautiful and breathtaking sight – much more striking than the many ruins we had seen previously in Mexico.  Most of the temples at Tikal can be climbed, some with rather rickety and steep ladders (it would seem that safety regulations are pretty much non-existent in Guatemala).  The craziest of these involved a completely vertical series of six wooden ladders, and a small platform at the top (with no railings).  Erik had to help talk down another girl from New York in our group who was justifiably petrified on the way down. 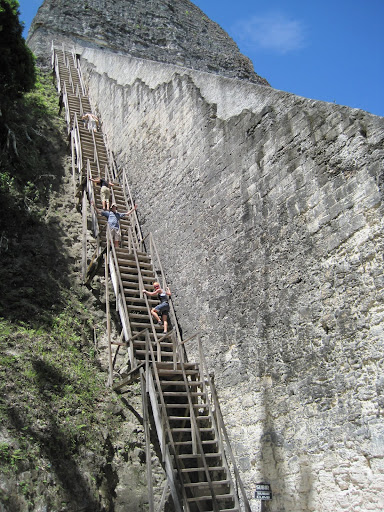 After seeing so many Mayan sites in Mexico, we had in a way started to become “ruined out”.  Tikal, however, was awe-inspiring.  Standing on top of one of the many temples, we closed our eyes, drowned out the sounds of the wildlife, and imagined what life would have been like in this ancient “lost” city.