Before we even had the chance to dust off from our early-morning encounter with Java’s Bromo Volcano, we were ready for the next volcanic sight – Ijen Crater and the remarkable miners that painstakingly extract its sulfur deposits using only primitive tools and pure muscle.

We set off in the car with our driver, Mr. Havid, through rice paddies, tobacco fields, and sugar cane plantations, all thriving under the hot Indonesian sun. 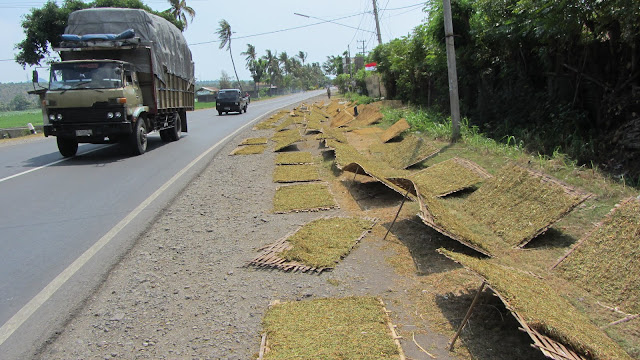 Seeing some workers with machetes hacking away at stalks of sugar cane off the side of the road, Mr. Havid pulled over and struck up a conversation. They cut down a few bits for us to sample, getting a kick out of my attempt at chomping down on the raw cane. 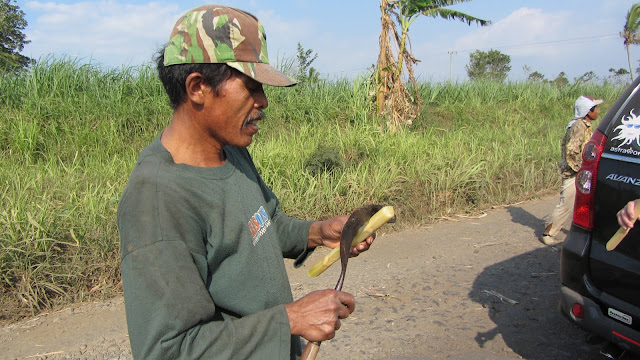 We were warned the final stretch of road to reach our accommodation that night would be “rough.” That was putting it mildly. This had to be one of the worst roads either one of us had ever seen. Over the next hour we got bounced around like rag dolls, listening to large boulders striking the undercarriage, and praying we wouldn’t get a flat. A few times Mr. Havid had us get out and walk while he maneuvered through the trickier parts. 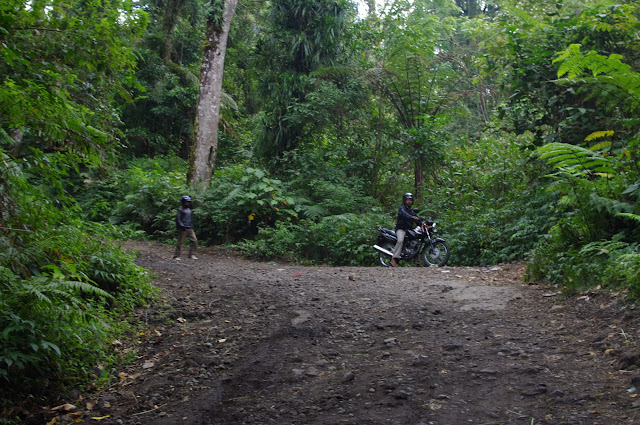 All this to travel a grand total of 10km.

We were happy to finally arrive in the small Catimor Homestay, located on a coffee plantation run by the Blawan Coffee Company. The accommodation was fairly basic and the proprietors – knowing they are running, literally, the only game in town – were charging exorbitant prices for their substandard food. We refused the one item on their “menu” (an expensive and sad-looking buffet dinner), and opted instead to munch on some snacks we had brought. Luckily, there were some nearby geothermal hot springs for us to make use of. 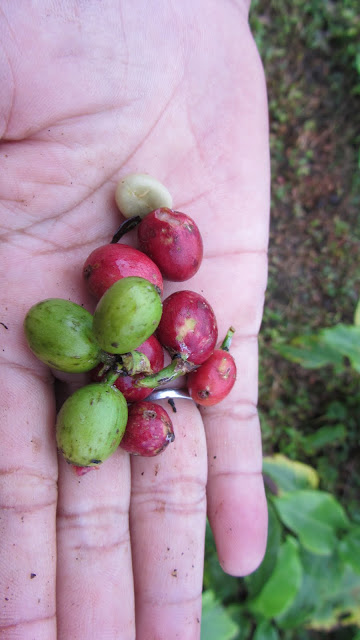 The next morning, we were once again up before dawn, in the car and on our way to the trailhead for the hike to the Ijen Crater. Like the previous tour we had taken of a silver mine in Bolivia, we were first brought to a miner’s market to buy small gifts to hand out to the hardworking men we would be meeting along the way. Mr. Havid advised us to buy a couple packs of cigarettes to dole out. While I would normally be the last one to encourage an unhealthy habit like smoking, by the end of the day it would be obvious that cigarettes were the least of these mens’ worries. 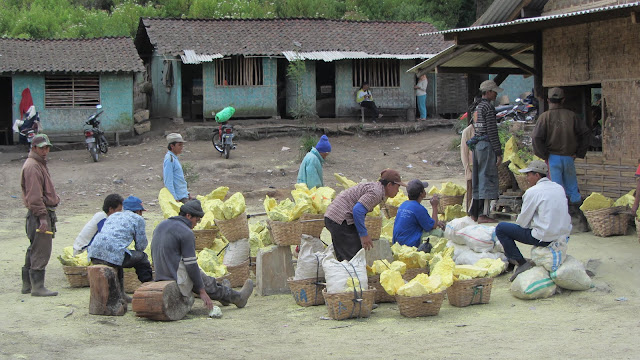 We started the 3km ascent to the crater following the same path the sulfur miners use. Every day, these workers wake early, ascend to the crater’s rim and down into the caldera, where they collect as many chunks of solidified sulfur as they can humanly carry on the return trip back over the crater’s edge and down to a collection point at the base. Most of them make two or three trips a day and carry 70-100kg of sulfur each trip. It’s backbreaking work. Some of the men have highly deformed shoulders from carrying such heavy loads. Many do the trip barefoot or wearing only cheap flip-flops. 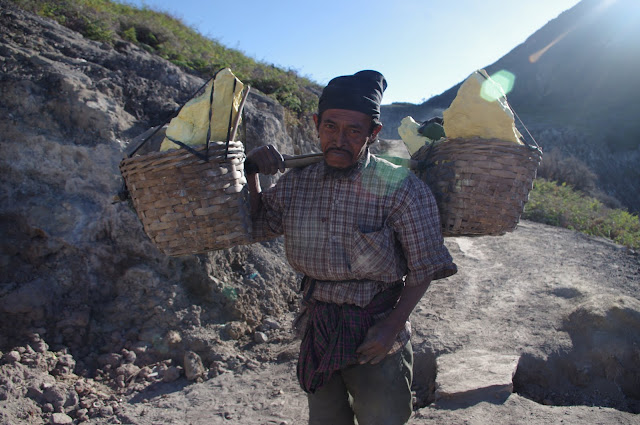 As we hiked up the path, we cheered on the passing miners, handing out the cigarettes we had picked up. While we were huffing and puffing up the steep incline, the guys making the return trip with empty baskets were lapping us with ease. 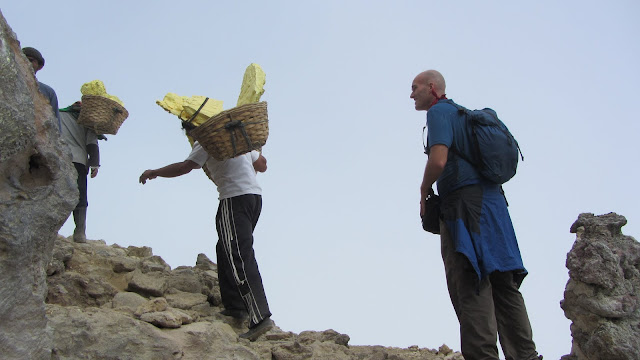 We neared the top, breaking through a low cloud layer, and getting a look down over the rim into the smelly, smoky crater. It was like staring through a window into hell. 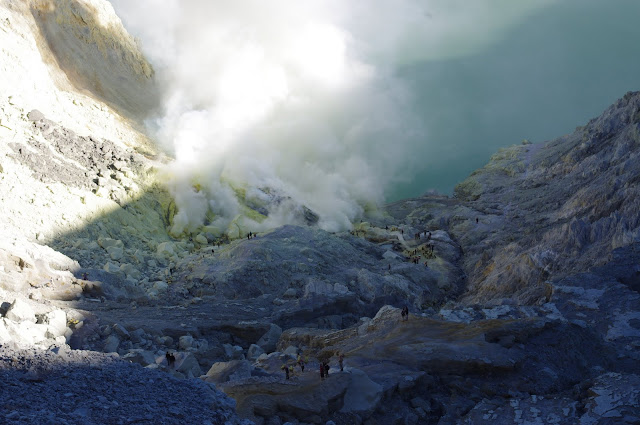 After pausing for a few photo ops, we started making our way down the sharp switchbacks towards the mining operations at the bottom of the crater. Also inside the crater sits a large, turquoise lake. Beautiful as it may be, this lake would not be one you’d want to take a dip in – it’s actually the world’s largest lake of sulfuric acid, with a pH of around 0.2. 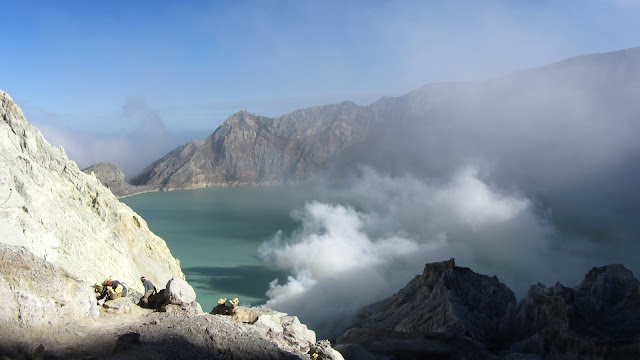 As we reached the center of the mining operations, we covered our mouths and noses with bandanas. As winds shifted, every once in a while we were hit by thick, yellow clouds of sulfur dioxide gas. It burned our lungs and stung our eyes. We tried to hold our breathe as the clouds passed by but sometimes it was impossible. Even the workers were coughing and cursing along with us. 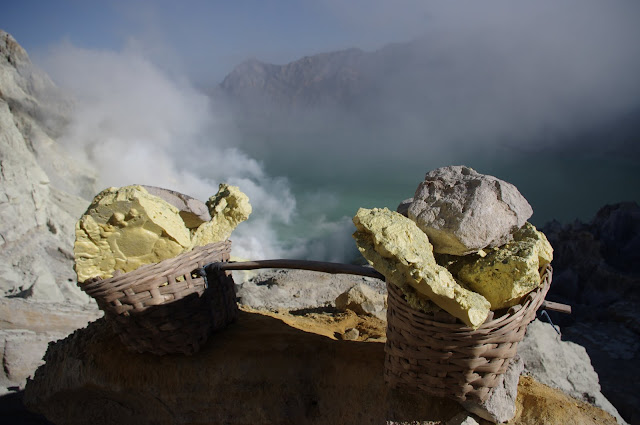 Liquid sulfur is extracted from fumaroles inside the crater using long ceramic pipes. After the sulfur dries, workers break it down into chunks small enough to fit into their baskets, then begin the trip back to the processing station at the base. The miners are paid based on weight, making on average $10-15 per day, which is actually a relatively high wage in Indonesia. 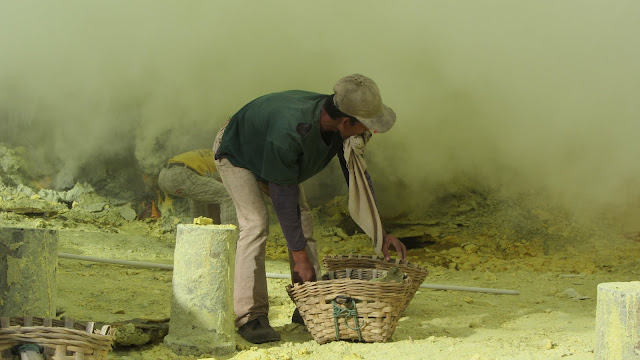 The complete lack of mechanization or safety equipment shocked us. This work is all done completely manually with brute force. Each day these miners make the same trip, back and forth, bit-by-bit, step-by-step. 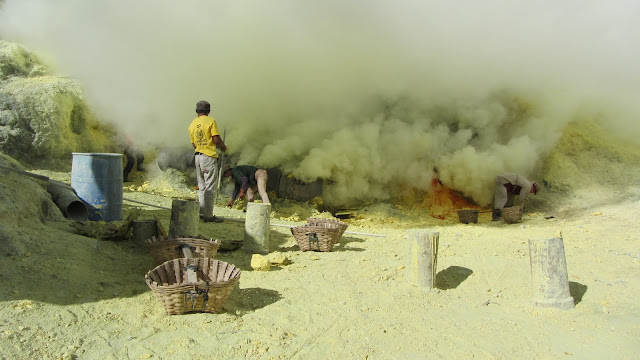 Another yellow cloud blew our way – this one the worst yet. Coughing men dropped their tools and started running away. We decided it was time to leave. 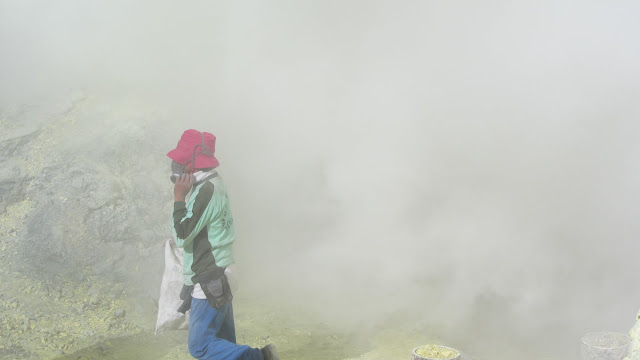 Back at the top of the crater rim, we spotted a small sign stating that tourists weren’t allowed into the crater. Oops. 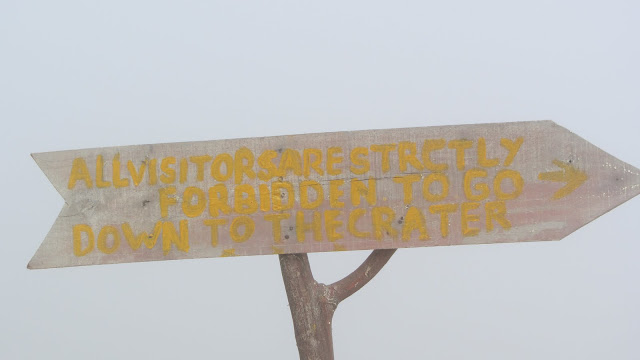 We passed out our remaining cigarettes, pepping up miners we passed back on the way down.

It took weeks before we could wash the smell of sulfur out of the clothes we took to Ijen Crater. The memories, though, will last a lifetime.

For another look into the sulfur miners of Kawah Ijen, Indonesia, see the BBC’s Human Planet (episode 5) and article on BBC news.