While cleaning out our Jucy Jazzy car in Te Anau, I found a GPS system underneath one of the seats. We had not rented this with our car, but since it was there, we decided to use it. It saved Erik’s cell phone battery and it was really easy to just stick up on the dash and go. 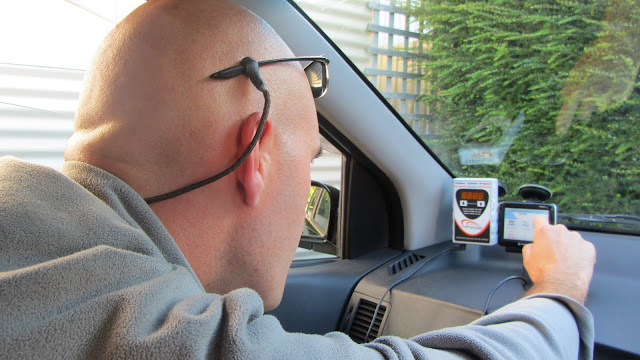 Once again, the scenery along the drive did not disappoint. Beautiful crystal turquoise lakes like I have never seen before. Simply stunning! When we finally made it to Queenstown, the holiday park was packed. There were no cabins available, so we stayed in a house-type share. Not ideal at all. It was like living with loud roommates in the next room. We did have a kitchen downstairs, where we could cook our meals. One night, we met these two cool girls from California traveling through New Zealand by motorcycle. 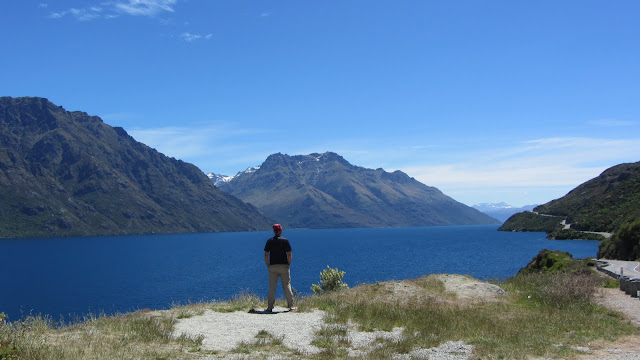 We took a nice walk around the lake in Queenstown. It is stunning. So clear and serene and COLD! Apparently, it stays around 11C or roughly 52F year round! Yikes! 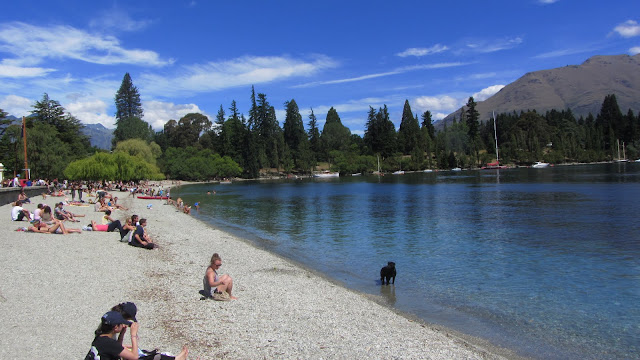 We made our way to the gondola which takes you up the mountainside to a beautiful panoramic view above the town. Thanks to our Top 10 card, we got a 10% discount. It helped us get discounts in many places in Australia and New Zealand. With the high costs of everything in these countries, we took every discount we could get! 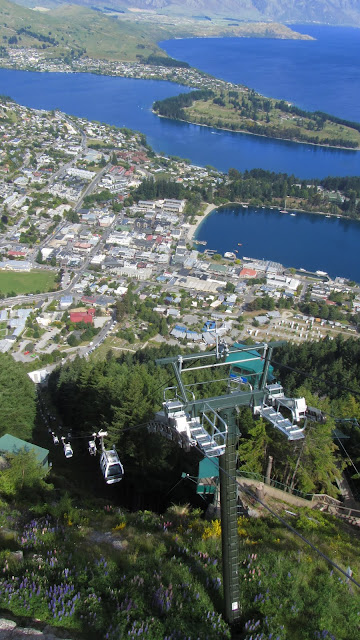 The gondola ride was very steep and despite the beauty, I still hate these things. We lucked out with the weather – the views were spectacular on such a clear day. As we were soaking in the view, we noticed the gondola had stopped. And not just for a few minutes. It was out for a good 20-30 minutes. Since I am so afraid of these things in the first place, I was more than a bit apprehensive to get on it again for the ride back down! 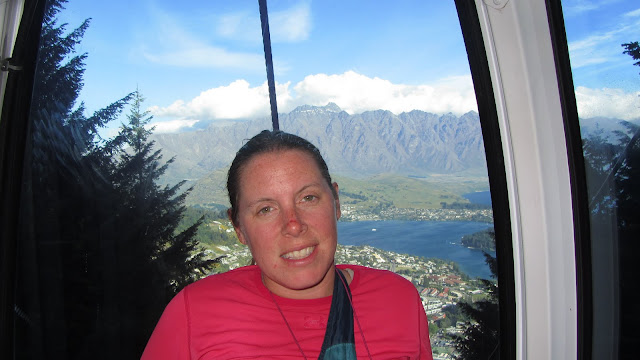 We decided to take advantage of the luge ride at the top of the gondola. We bought tickets for both the scenic and the advanced tracks and had a blast zipping down. Those things do move quite fast and as we heard later, can be very dangerous. It was good fun though. 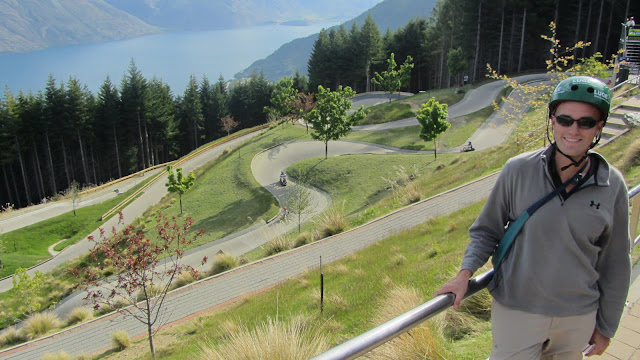 Taking advantage of the spare time we had while the gondola was out, we had a delicious $5 glass of New Zealand Sauvignon blanc in the bar overlooking Queenstown. Can’t beat it! 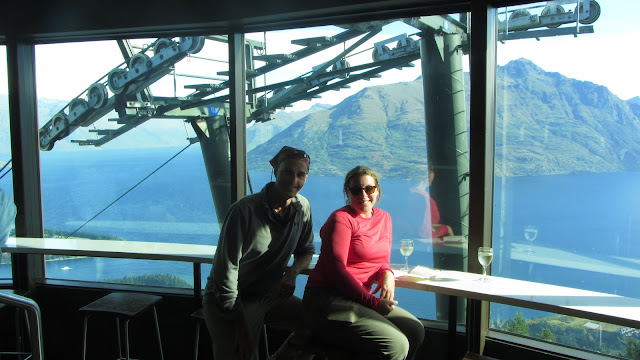 When we got back home, we found another Viator deal for a Million Dollar Cruise on the lake. Since Erik was working the next day, I decided to go enjoy the lake on the cruise. 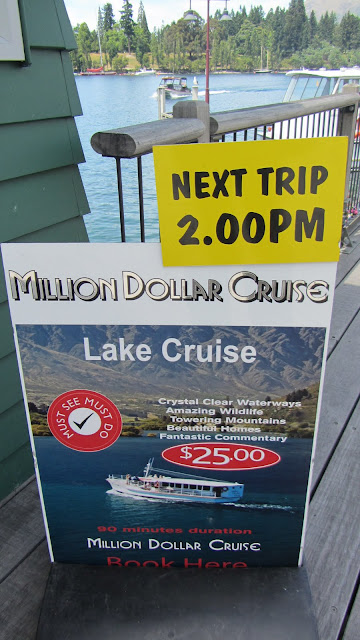 We tried to go have dinner at the famous Fergberger in town, but it was crazy crowded so we decided to try again another day. 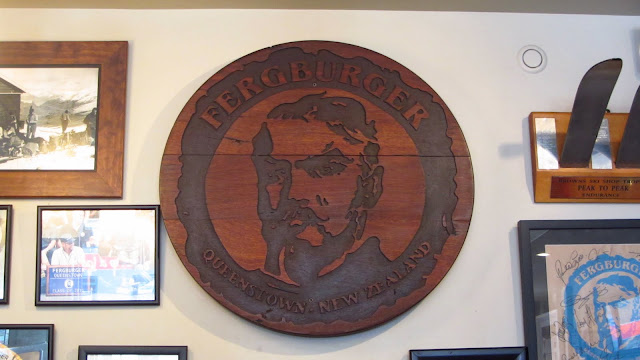 After a nice breakfast with Erik, I set off for my 11am lake cruise. The weather was gorgeous and clear – a perfect day to be out on the lake. The water was very clear and I got to see many of the million dollar homes that line the lake’s shore (thus the name of the cruise). The skipper pointed out some interesting boats, as well. A boat that had attempted to sail around the world, an old sightseeing boat, and even a boat that once belonged to Sir Winston Churchill! 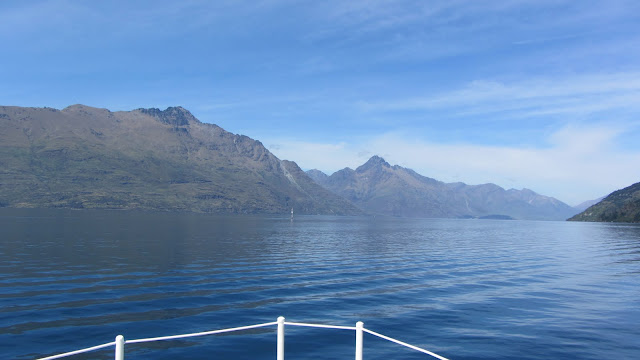 After the cruise, I had a walk around the “pier” and had a look at the restaurants. There were some tables set up selling crafts and photography, so I had a look at those, too. Then, we finally made our way to Fergburger. There was a line, once again, but it looked manageable. We placed our order and then had to wait. 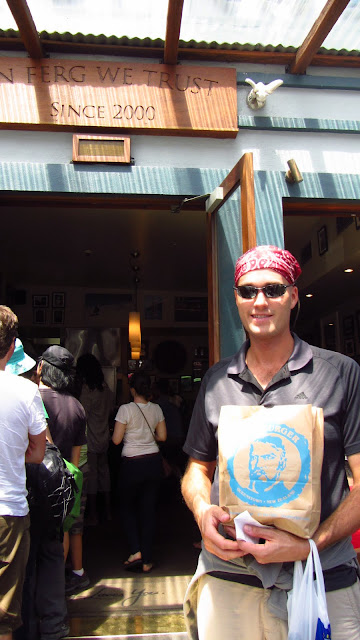 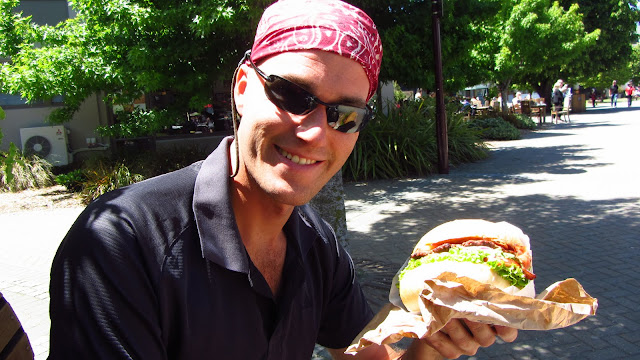 Definitely a belt and a budget buster, but we just had to try them. As we were sitting there along the lake chowing down on our burgers, a guy came up and asked us where we had gotten them. They are certainly some of the most famous burgers in New Zealand! 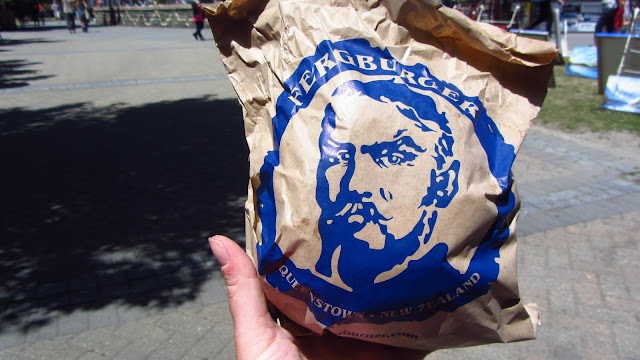 After lunch, we booked Erik’s bungy jump. I was so scared for him, and then even tried to convince me to book a jump. But, I said NO WAY! That’s the crazy kind of stuff I leave for Erik to do! Stay tuned for that story…

Then, we went to our 3pm wine tasting at Wine Tastes. We had gotten a deal on BookMe, so for $15 each, we got to taste $30 worth of wine tastes. We tried all of the New Zealand sauvignon blancs, some more than once… Some reds, some dessert wines. 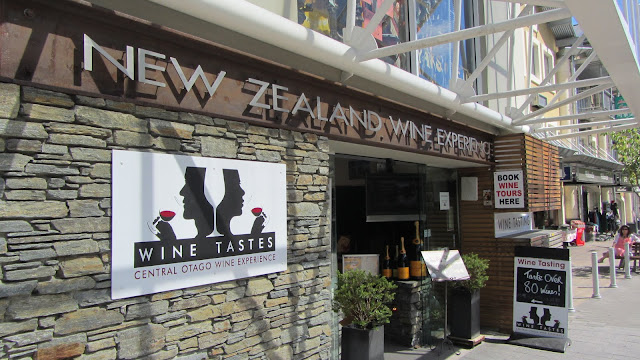 It’s basically set up for people who want to taste all of New Zealand’s incredible wines, but won’t be able to visit all of the wine regions. It’s a bit touristy and expensive, but if you want to taste some nice New Zealand wines while you are in Queenstown, that’s the place to go. 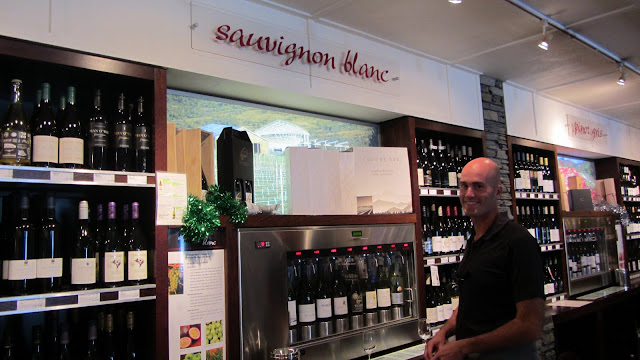 After that, we went home and Skyped with my sister Caite. We had a nice chat and then Erik and I packed up a bit. In the morning, it was JUMP TIME!