After two full days on the slow boat down the Mekong from Thailand, we were looking forward to life back in civilization at our destination, Luang Prabang. Situated at the confluence of the Nam Khan and Mekong rivers, this city of 50,000 is the biggest tourist attraction in Laos, drawing people from all over the world keen to explore its tranquil temples, French colonial architecture, and laid-back vibe.

Unfortunately, the heavy influx of tourists is changing the nature of Luang Prabang. Long-time residents are getting squeezed out of the city center, which is quickly turning into a never-ending collection of guesthouses and restaurants, all too expensive for the locals. Ironically, as more and more original businesses and residents are forced away, the very purpose for coming here in the first place – for an authentic experience in a traditional Lao setting – is becoming impossible. 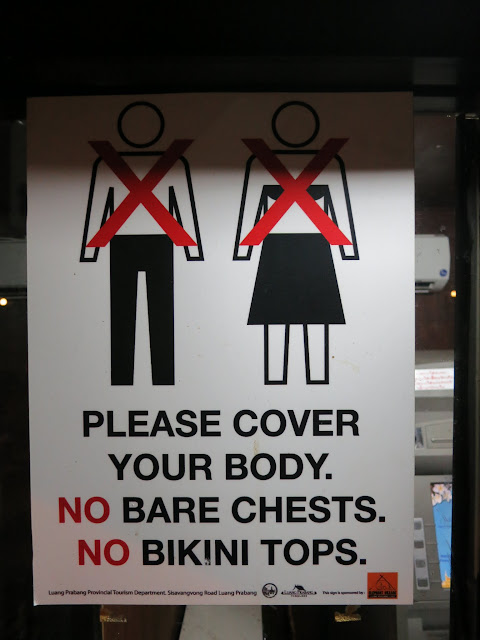 Luckily, all is not lost…yet. We were still able to escape the throngs of tourists staying in boutique hotels and eating at fancy restaurants. Most nights, we dined in the local night market, which offered some of the cheapest and tastiest food around. 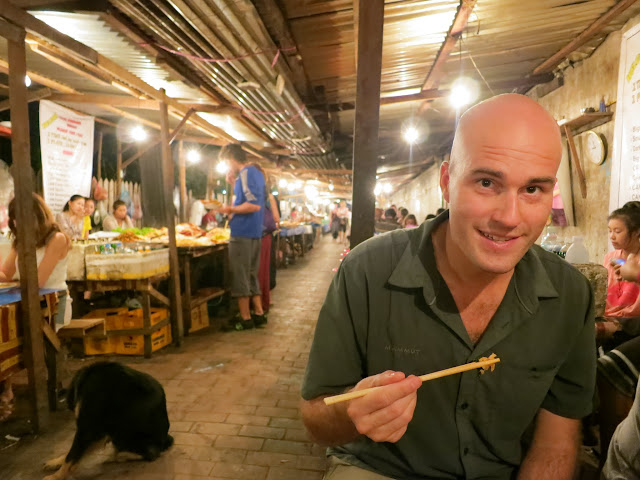 While Lao food is very similar to Thai food, there are some differences as well. Unfortunately, we found our favorite dish from Chiang Mai – the curry noodle soup known as khao soi – was entirely different over the border. Instead of chicken in a spicy coconut broth, we found the Lao version to include minced pork in a more watery broth. Oh well… 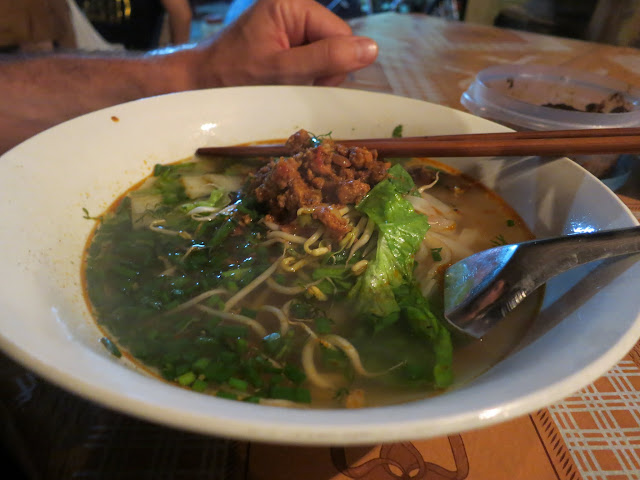 During the daytime, another vibrant market sold fruit, vegetables, and fish caught from the Mekong. 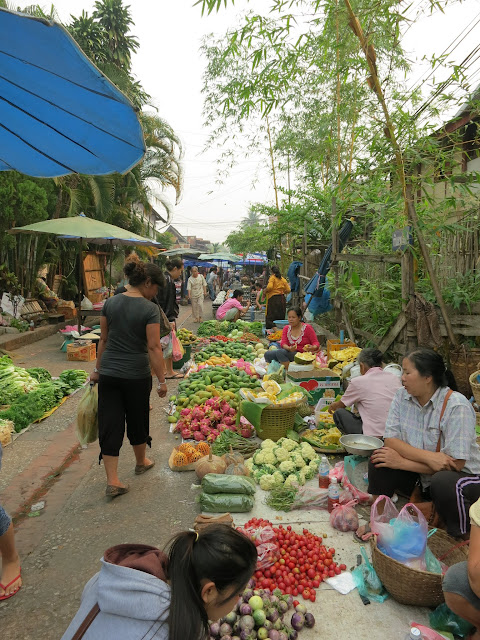 As the former royal capital, recognized by the French colonial rulers, Luang Prabang is packed with many beautiful historical buildings in varying states of decay. The French influence is strong, with a hybrid Asian-European design inspired from similar Vietnamese architecture. We enjoyed strolling around town admiring these grand buildings. 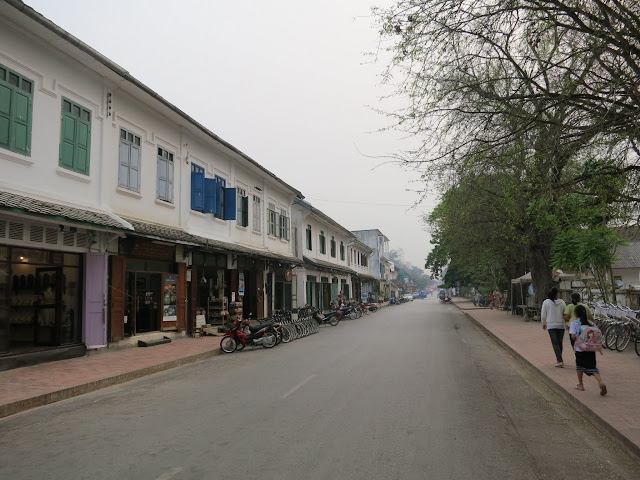 Luang Prabang is also considered the spiritual capital of Laos. In fact, the name itself means “Royal Buddha Image” and the Phra Bang Buddha statue can be found at the Royal Palace Museum. The palace was built by the French to house King Sisavang Vong and his family, which lived here until they were overthrown by the communists in 1975. 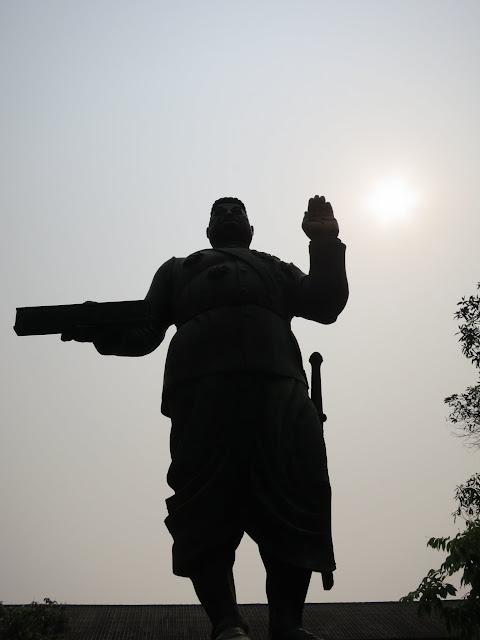 Since it was converted into a museum right after the royal family was overthrown, the interior has been left preserved exactly as it was the day they left, complete with 1970s era furnishings.

Also on the palace grounds, the Royal Temple or Haw Pha Bang, can be found. This originally housed the Phra Bang Buddha Image, but after the communist takeover was neglected due to its association with the monarchy. Recently, it was rebuilt in traditional Lao style and serves as a key landmark in the city. 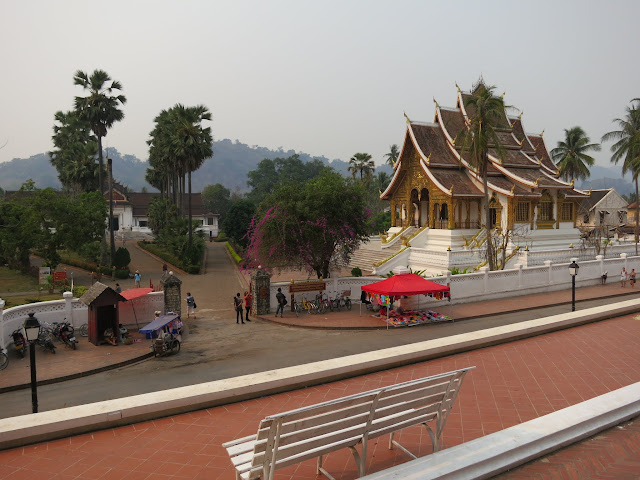 There are, of course, temples scattered all over Luang Prabang. We spent a day doing a temple tour, taking in many of them. One of our favorites was Wat Chom Si, perched high up on Mount Phu Si right in the middle of the city, offering great views of the surrounding area. 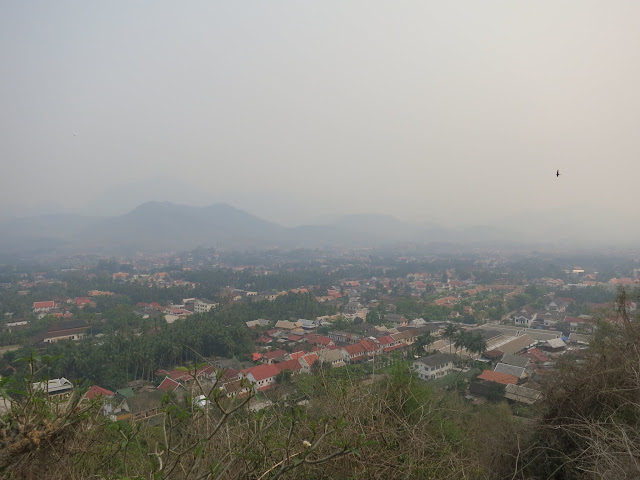 Everyday life tends to revolve around the rivers which frame Luang Prabang. We enjoyed relaxing by the Mekong and Nam Khan Rivers, oftentimes with a sunset beer in hand. 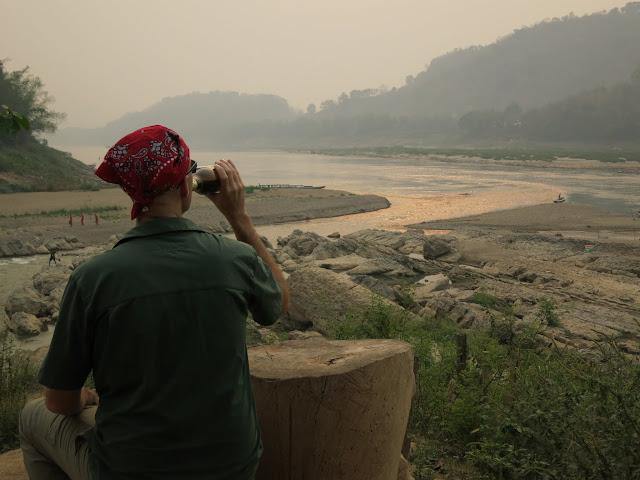 A rickety bamboo bridge connects two neighborhoods. While locals can pass for free, a toll collector was charging farang like us. 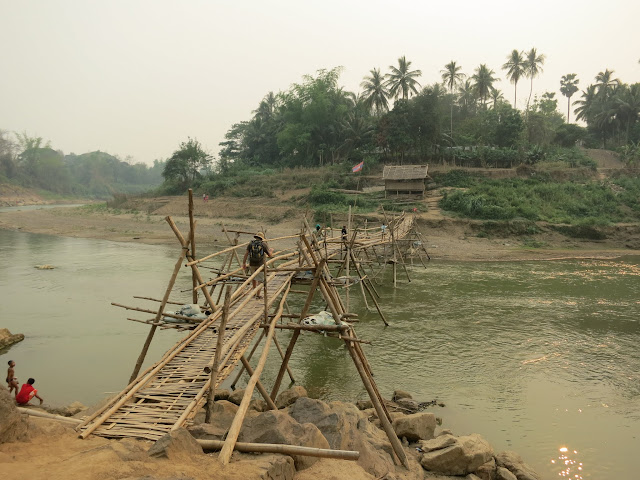 Young monks were cooling off in the river. We had fun watching them peform backflips off boulders into the river.

We decided to cool off too, but not in the muddy Mekong. Instead, we made our way to the nearby Kuang Si Falls. This gorgeous series of waterfalls include the 60m (200 ft) main falls, followed by a number of smaller falls and terraces at the base. 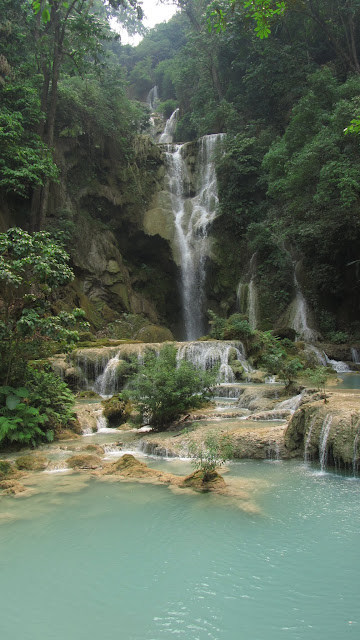 The emerald green water was a refreshing way to beat the tropical heat. 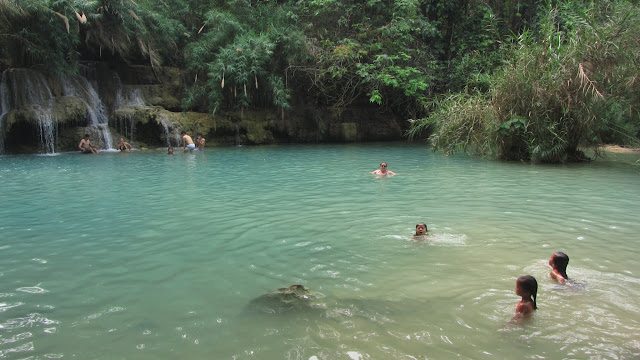 An Asiatic Black Bear rescue center is located near the falls. More than 20 of the threatened adorable bears live here, free from a life of being held in a farm or poached for bear bile. Bile is a traditional Chinese medicine which is harvested in a cruel process from live and dead Asiatic Black Bears. 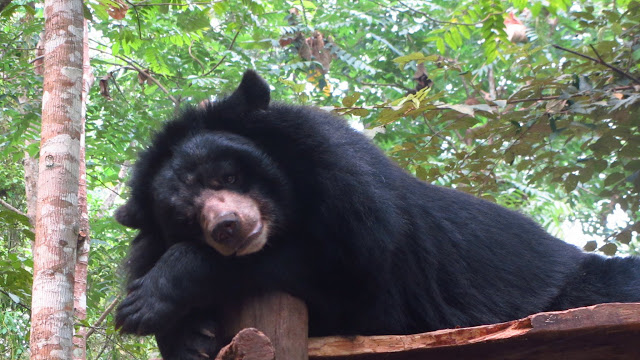 After five relaxing days in scenic Luang Prabang, we were ready to move on. Next up was Phonsavan in Eastern Laos, where we would come to grips with a disturbing and relatively unknown consequence of the Vietnam War…

2 thoughts on “The Scenic and Serene Life by the River – Luang Prabang, Laos”