With only a few days to go before our big trip to the Galapagos, we left the mountains of inland Ecuador and headed for the coast. We had been told it would be anticlimactic to visit “The Poor Man’s Galapagos” (aka Isla de la Plata) after seeing the real thing, and we were looking forward to a little sun and surf after more than a month spent in colder mountain altitudes.

We decided on the backpacker and surfer-mecca town of Montañita, which is a few hours up the Southern Coast from Ecuador’s largest city, Guayaquil. After all full day of travel involving two connections, we pulled into Montañita a little after 8pm and started looking for a place to stay.

Luckily, we stumbled upon an oceanfront room at Charo’s Hostal, with A/C, private bath, a balcony with our own hammock overlooking the beach, and an onsite pool and hot tub. We thought it was a steal at $25/night. 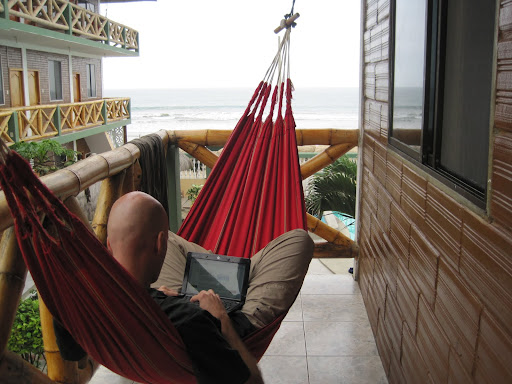 One of the main attractions of the area is the Machalilla National Park, about an hour north near the fishing village of Puerto López. The park includes the Isla de la Plata island, which has been dubbed the “Poor Man’s Galapagos” due to the similar barren terrain and sea bird colonies.

We joined a tour from the beach at Puerto López one morning, where the local fishermen had laid out their catch of the day – dozens of sharks. 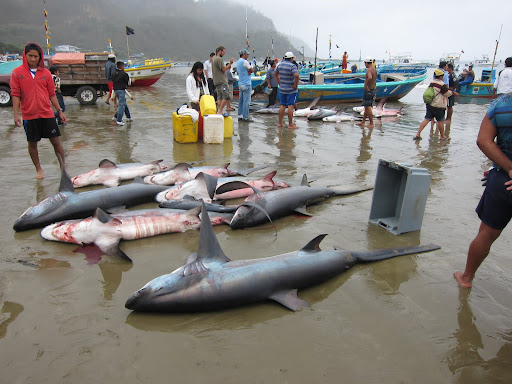 Next, we boarded a speedboat for the 90 minute ride to Isla de la Plata. The seas were fairly rough and the waves were high, though we were lucky to spot a few Humpback Whales enroute. The whales waved their fins at us and we were even lucky enough to see a few “breaches” where one would jump right out of the water and splash the water with its back. 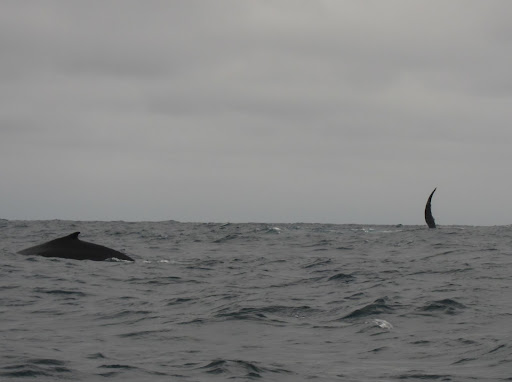 This area is a breeding ground for whales, which migrate up to 16,000 miles a year between polar feeding grounds and warmer breeding areas. The breaches are a way for the males to catch the female’s attention.

On Isla de la Plata, we followed a trail around half of the island. During the hike, we saw thousands of blue-footed boobies, most of which were busy nesting. These birds had almost no fear of humans, in many cases blocking our path and waddling right up to us. 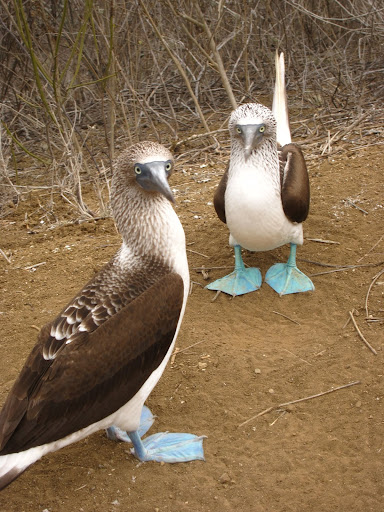 When the Spanish first encountered these birds, they assumed they were very stupid due to their fearlessness of humans, their ungraceful take-offs, and humorous behavior.

During the hike, we also spotted Nazca Boobies (also known as Masked Boobies), some non-native Galapagos Sea Lions, Pelicans, a snake, and a baby Albatross. After touring the island, we also had the opportunity to snorkel off the island. The water was freezing cold, but there was a decent variety of coral and tropical fish to see. 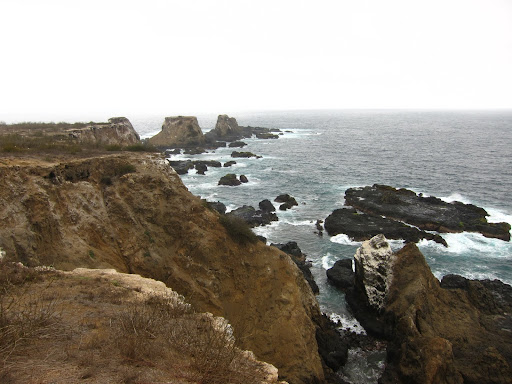 It was very interesting to learn about these animals and see them in such an unspoilt environment – no doubt, a great prelude to the Galapagos.

Unfortunately, while we spent five days in the beach town of Montañita the sun did not come out at all. Coupled with the cold air temperatures, most of our time was spent relaxing in the hostel’s hot tub or exploring one of the many bars around town. Even though it’s a small town, there are a lot of restaurants, bars, and clubs catering to the tourists and we had a great time exploring them. It would have been nice to visit the town with warmer and sunnier weather, but we enjoyed it nonetheless. 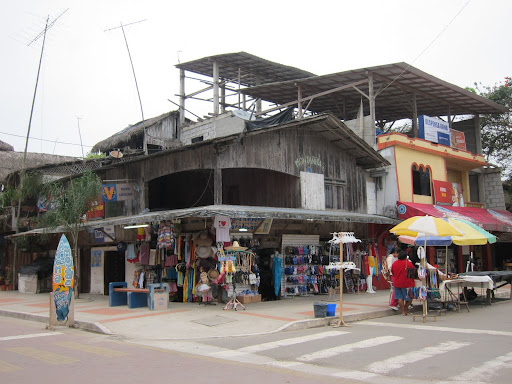 On our final day in Montañita, I was working on my computer in the hostel lobby while Heather was in town getting an inexpensive manicure and pedicure. Halfway through the morning, the receptionist turned on the TV, where fast and furious news reports were talking about a nationwide police strike over unfair wages and benefits. In Quito, Guayaquil, and other Ecuadorian cities, police had erected roadblocks of burning tires, gathered to stage large protests, and abandoned their posts. With a lack of police presence, looting, rioting, and other lawlessness was taking over the big cities. The situation seemed to be getting worse by the minute, and soon a crowd had gathered around the TV in the lobby, pacing around nervously and making phone calls to check on people they know.

Luckily, we were completely safe in sleepy Montañita, though I started to worry that our trip to the Galapagos would be cancelled. When Heather came strolling into the lobby of the hostel, oblivious to what was going on, I told her “Bad news. We might not be making it to the Galapagos.”