Technically, North and South Korea are still at war. While an armistice agreement was signed in 1953, no “final peaceful settlement” of this conflict has been achieved. And if you’ve been following the news recently, you’ll appreciate how tense the situation is.

Taking a trip into the Demilitarized Zone (DMZ) separating the two countries might seem like a risky endeavor, but in reality it has turned into a big tourist attraction and topped the list of things we wanted to do in Seoul. 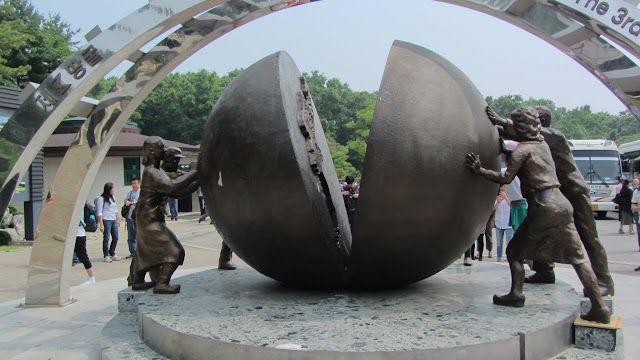 We booked a full-day tour through Panmunjom Travel Center (PTC). Tours are also provided by the USO, though the USO ones are more popular and tend to sell out earlier.

The visit to the Joint Security Area at Panmunjom will entail entry into a hostile area and possibility of injury or death as a direct result of enemy action. The Joint Security Area is a neutral but divided area guarded by United Nations Command military personnel on the one side (South), and Korean People’s Army personnel on the other (North). Guests of the United Nations Command are not permitted to cross the Military Demarcation Line into the portion of the Joint Security Area under control of the Korean People’s Army. Although incidents are not anticipated, the United Nations Command, the United States of America, and the Republic of Korea cannot guarantee the safety of visitors and may not be held accountable in the event of a hostile enemy act. 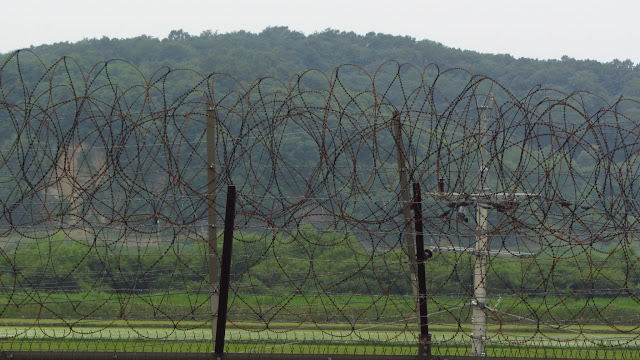 The tour company also let us know about the dress code ahead of time, which prohibits worn, faded, and overly casual items. They don’t want the North Koreans snapping photos of tourists in torn jeans and singlets which could end up being used as propaganda along the lines of “look at these Westerners that don’t have enough money for decent clothing!”

After boarding a bus in the morning, we departed along the Freedom Highway towards the DMZ. As part of the tour, a North Korean defector spoke to us with the help of a translator. The young woman had taken an unimaginable risk, swimming along rivers and leaving her entire family behind forever after escaping via China. She now has a comfortable life in South Korea, but is completely alone. Contacting her family back in North Korea could put them in jeopardy. 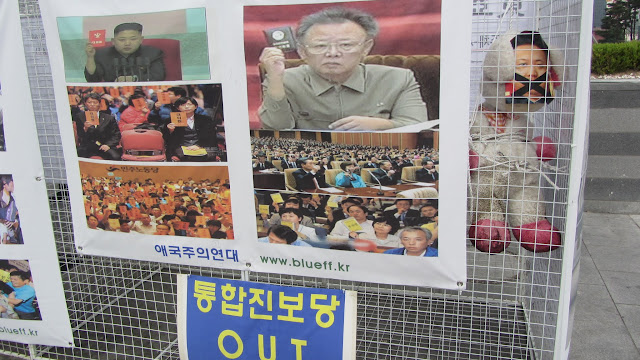 Our first stop along the DMZ was at the Third Tunnel of Aggression. Over the years, the North Koreans have built a number of infiltration tunnels under the DMZ, designed to be used to launch a surprise attack into the South. This particular tunnel was discovered in 1978, and runs a length of 1.7 km (1.1 miles) at a depth of 73 m (240 ft). After initially denying they had built the tunnel, North Korea later claimed it was part of a coal mine, though no coal was found in the surrounding granite (save for some black paint left behind by the North Koreans). 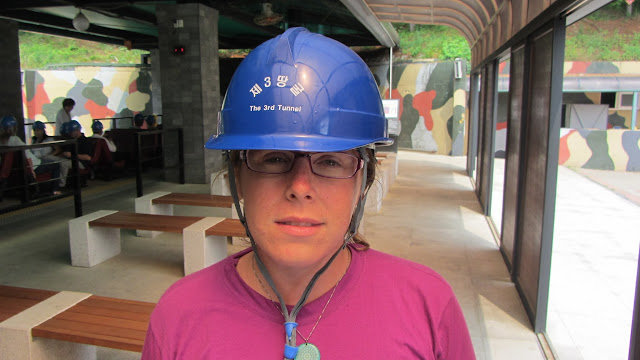 The tunnel has become a major tourist attraction, with visitors donning hard hats and riding a monorail down into the tunnel. Inside, the DMZ line has been blocked off with concrete barriers.

At the nearby Dora Observatory, we peered through binoculars across the DMZ and into North Korea. From here, we could spot the Kijong-dong “Propaganda Village” with it’s enormous flagpole. 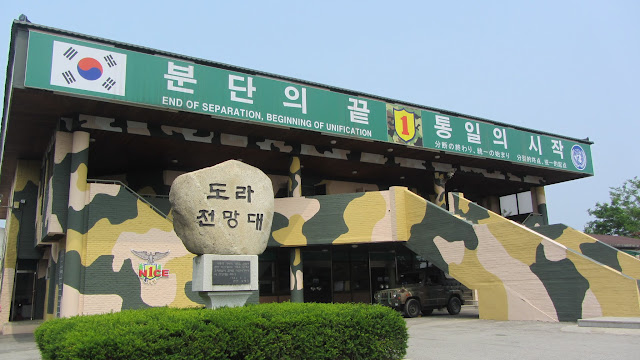 In 2000, North and South Korea agreed to join their two train lines, connecting South Korea to Asia and Europe via the Trans-Siberian Railroad. South Korea eagerly constructed the gleaming $40 million Dorasan Station, hopeful that this agreement would usher in a new period of peace and prosperity. 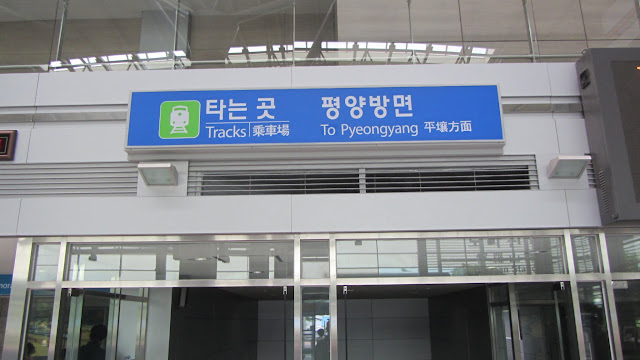 Unfortunately, that never happened. After the first and only “test run” in 2007, this station has sat completely empty with no trains arriving or departing from its platforms. 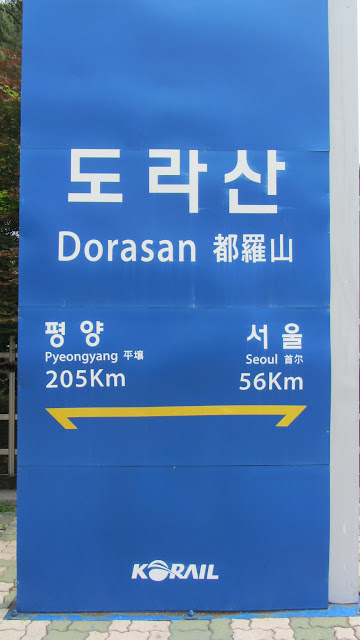 During the tour, we were continually surprised how optimistic our guides sounded about reunification. They did not present it as a question of “if” but more a question of “when”. Dorasan Station seems to be a sad testament to this blind optimism. 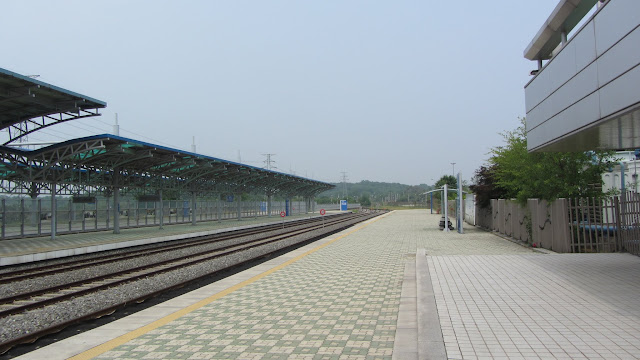 Our last stop before lunch was Imjingak Park. The park has many statues and monuments commemorating the war, along with restaurants, kiosks, and amusement rides. It was originally built as a place of remembrance for those cut off from their friends and families, but these days it feels more like a county fair. 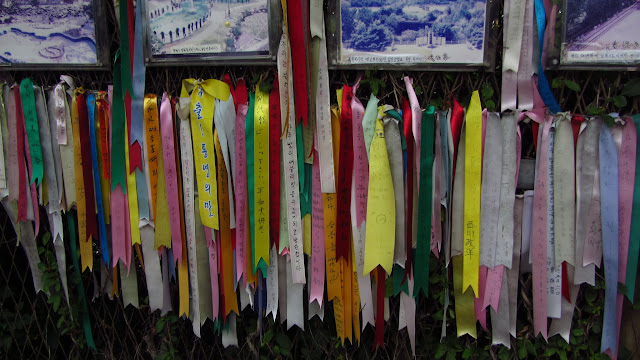 Imjingak is also home to Freedom Bridge, an old railroad bridge which was built in 1953 to allow 12,773 POWs cross back into South Korea. 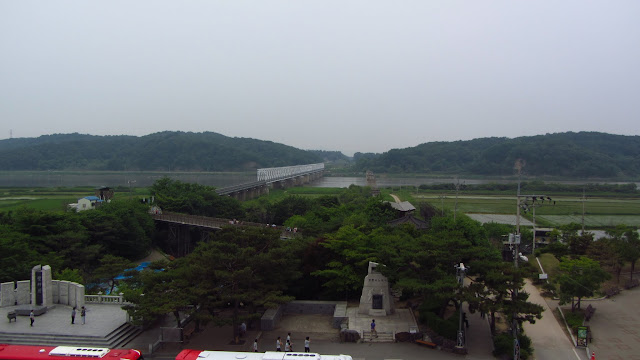 All the places profiled in this post are actually just outside the DMZ. Since South Koreans are not normally allowed into the DMZ, they represent the closest most visitors from the Republic of Korea (ROK) can get to North Korea.

Luckily, as American passport holders, we could get even closer. Next, we would cross into the DMZ and straddle the two borders. Continued…