With one night to kill while in transit between Burma and Hong Kong, Heather decided to try one of the many “Fish Spas” found all over the Khao San Road area. For around 100 to 150 Baht (USD $3.50 to $5) per 15 minute increment, visitors can plunge their feet into an aquarium tank filled with Doctor Fish – a sucker fish native to the Middle East that likes feeding on dead and unhealthy skin. While the practice has been outlawed in the US and Canada, where it’s believed to be unsanitary, Fish Spas are going strong here in Thailand – you can’t walk a block in most tourist areas without running into one.

After an attendant cleaned her feet, she scooted up to one of the benches running alongside a large clear aquarium tank, before slowly lowering them in for the ravenous nibblers. Within a few seconds, scores of them were attacking every square inch of her foot. 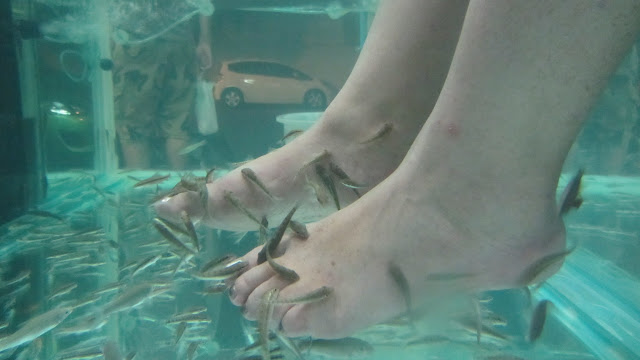 So, how does it feel? Well, watch this video and see Heather describe the experience!

So, I’m in Bangkok and I’m having the famous Foot Fish Spa. And they are eating the dead skin off of my feet. And it feels really, really weird. It’s like ticklish, but it also kind of hurts. And you want to pull away, but you can’t because that’s what they are supposed to be doing.

It feels really weird. I don’t know if I can do all 15 minutes of this, but, that will definitely be enough time.

They have prices here up to, I think, an hour, or 30 minutes. I don’t know how you could stand more than 15 minutes.

It feels really weird. It feels ticklish, but it also feels like it hurts a little bit. Like you can tell they are taking something off your foot.

I can’t say I like it, but it’s definitely an experience.