We headed to Ushuaia with great excitement. After nearly 11 months of southward travel, we were about to reach the end of the world!

Ushuaia, Argentina is the southernmost city in the world. It’s a touristy town with a national park, lots of restaurants, outdoor clothing stores and travel agencies. Before reaching Ushuaia, we had a small seed planted in our heads about visiting the continent of Antarctica. We had heard from other travelers and friends about last minute deals to the White Continent that leave from Ushuaia. As we got closer, we realized we had the opportunity of a lifetime. Because we were in Ushuaia at the right time (the end of the Antarctic summer), we knew we couldn’t pass this up and would never forgive ourselves if we did. Before we even got to town, we had already emailed a few travel contacts there and had lots of information on several last minute options. 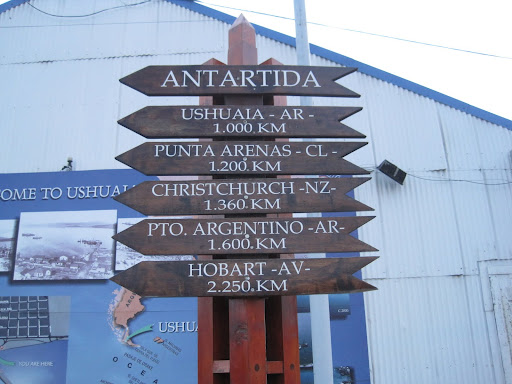 Ushuaia itself is a cute town, but for backpackers, it is very touristy. Many boat and cruise ships dock here from Chile, other parts of Argentina, and many, if not most, cruises to Antarctica leave from there. The first day we were in town, we met with a few travel agents about cruises to Antarctica. As we talked and learned more about it, we knew we had to do it! Within just a few days, we had decided on a 12 day cruise with the chance to cross the Antarctic Circle! This meant that we had passed up a couple of other ships leaving sooner to board a ship that left in a week. We would be in Ushuaia for a total of 9 days, which is far too long, but we knew it would be worth it for the trip that most people only dream of. 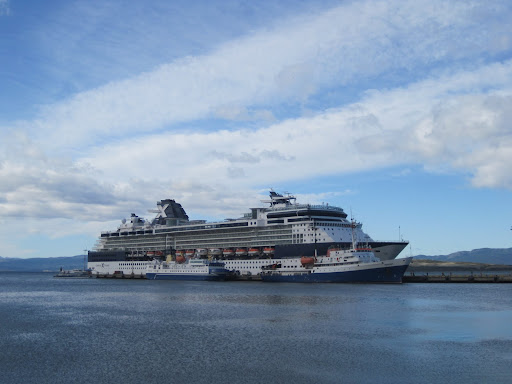 Since Erik would be missing several work days while we were on our cruise, he would have to bank a full week of work. We moved from the large but nice Lupino’s Hostel to the quiet apartment/hotel La Posada Costa Serena. It was a bit like staying at Grandma’s house, with dated décor, furnishings and carpeting. But, it was quiet, and we had a great view of the ships coming into the harbor. 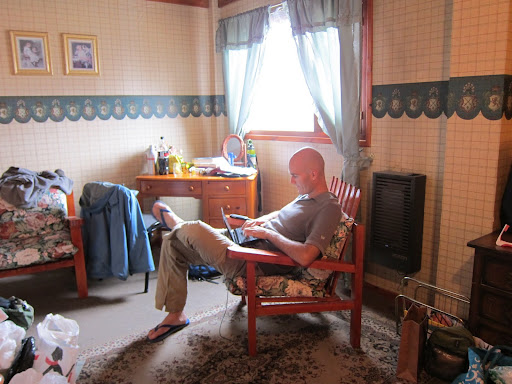 Each day we would wake up excited to see what new ships had pulled in to dock. Since we had studied all of the options leaving in the next few days, we knew when each ship could come in. We kept convincing ourselves, “oh, our ship looks larger and more stable.” We had hoped we were right. 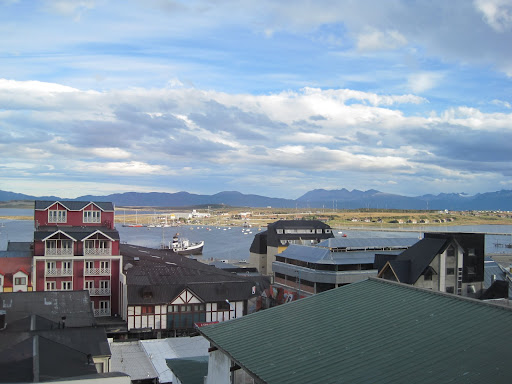 Ushuaia has a few interesting museums. We visited the Maritime, Antarctic, and Prison museum which is housed in what used to be the Old Prison. In the first wing, each old cell now displays information on the old prison, prisoners and history about the prison. One wing was kept nearly as it was – dusty, broken wooden floors and all (blocked off from visitors, of course). It was fascinating to see the prison in its original condition. An eerie smell and energy filled the air as I closed my eyes and imagined how it once was with prisoners inhabiting these cold prison walls. 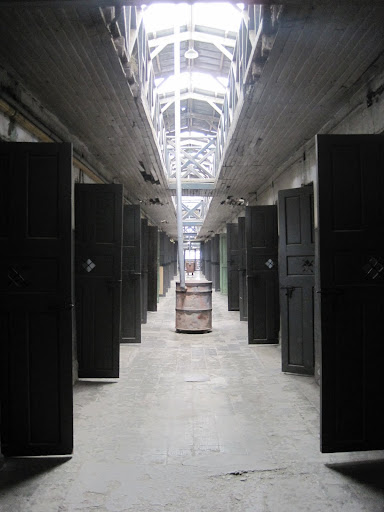 Other wings of the old prison displayed information on Antarctic explorations, expeditions, shipwrecks and information on wildlife. This, of course, was very interesting to us in preparation for our trip. The stories of the expeditions were fascinating and we were even more thrilled to be taking this trip to the waters and lands where so few have been. 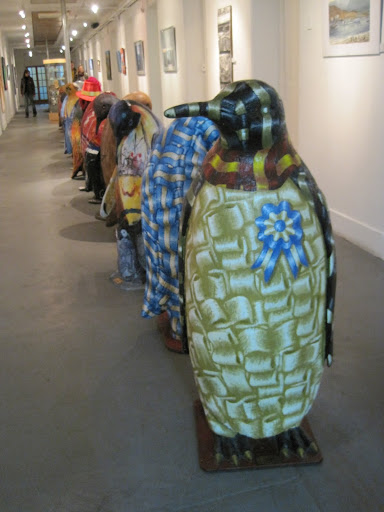 One day while Erik was working, I visited the Museo del Fin del Mundo. It was a small museum which occupied a building that was once an old bank. Here, I saw stuffed birds native to this part of Patagonia, including several types of penguins and condors. There were stories of more shipwrecks and more stories about the prison. I was mesmerized by the old photos. One shipwreck story that stuck with me was Monte Cervantes, known as “The Titanic of the South”. This luxurious cruise ship was the first to visit remote Ushuaia, which was only accessible by ship at the time. Sadly, after encountering bad weather, it ran aground in the Beagle Channel and began to sink. Passengers and crew boarded the lifeboats and headed to Ushuaia. At the time, only 800 people lived in Ushuaia. With 1,200 passengers setting upon the town, the population of the town more than doubled. The photos of the passengers spending time with the locals are just priceless. With so little space to house so many passengers, some even had to take shelter in the prison!

While in town, we decided to take a trip out to Tierra del Fuego National Park. This park can be seen in a few hours or a few days. We decided to hop on a “bus” (small van) and explore the park for a few hours. We were lucky with the weather that day. When we arrived at the lake, we saw one-man Southernmost post office in South America. After taking some photos, we mailed some postcards to our families and to ourselves. This tiny post office which sits upon a dock over the water is run by just one man. It was nice and warm inside and we chose a few postcards and wrote them out. Miraculously, we have learned that some have already arrived! Shocking! 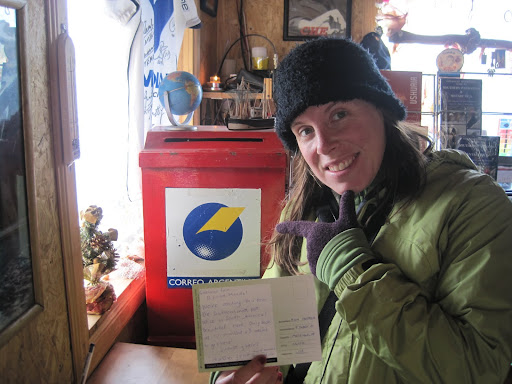 The park was nice. We saw a few birds and the scenery was nice. But, honestly, after touring Torres del Paine park for 5 days and soaking up the spectacular setting and wildlife there, this was actually disappointing. We were glad we had done it, but also glad we were only there for a few hours. 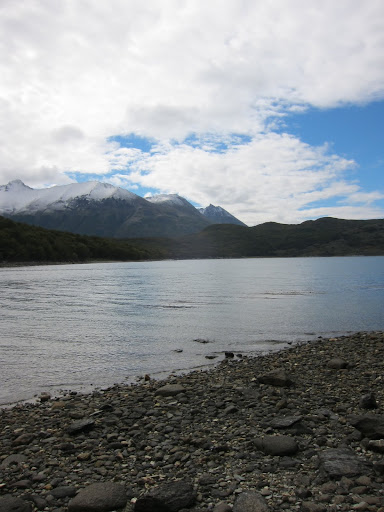 While Erik was working, I wrote a few blogs so that we could still have posts queued up while we were off the map. I scoped out the town for shopping options, as making the journey to the White Continent meant that we would need some gear and clothing that we didn’t have with us. I checked out a few winter jackets and pants rental shops. Some of the ships offer these items on the ship, but ours didn’t. So, I found a couple of options that would provide us with waterproof jackets, pants and gloves, but at a steep price. But, in this small town, there weren’t many options. I also found us some places to buy thick warm socks, thermal underwear and fleece neck warmers, which seemed ideal for cold, windy weather. 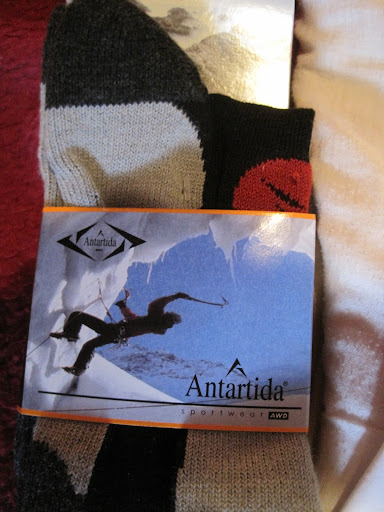 Finally, we were suited up and ready to go. Next stop – Antarctica!

6 thoughts on “The End of the World – Ushuaia, Argentina”