Despite the fact that we have traveled through so many countries for more than two years, everytime I enter a new country, I get a twinge of excitement. No matter how much you read, discuss, or think you otherwise “know” about a place, nothing can fully prepare you for what you are about to experience. It’s that excitement that keeps us traveling, pushing new boundaries, and walking away amazed and delighted at this beautiful world we live in.

Most people come to Cambodia to visit the massive temple complex of Angkor Wat, the largest religious monument and site of what might have been the largest pre-industrial city in the world. For years, tourists overlooked the capital city of Phnom Phen, but this quickly-changing face of contemporary Cambodia is now coming into its own. An expat we met in the region told us that ten years ago, this was a rough and ready city, full of gunslingers, unpaved roads, and child prostitutes. While we knew the city was changing, we were still expecting some form of this gritty version of Phnom Phen we had heard so much about. 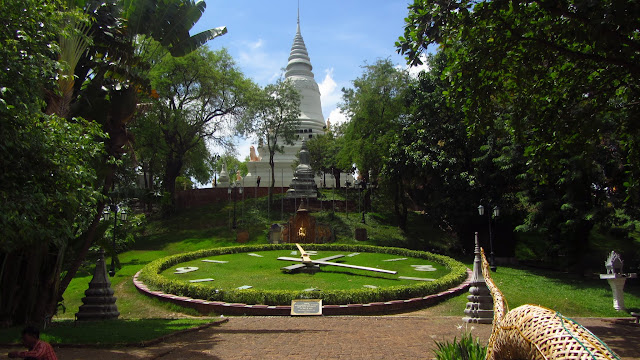 So, it came as a complete surprise to find a fairly clean, modern, and attractive city. In fact, it didn’t look that much different than cities elsewhere in the region – if anything it was better than a lot of them. While we know so much of the country remains underdeveloped, uneducated, and poor, it was shocking to see Lexus SUVs everywhere, a gleaming new casino, and posh nightclubs. It would appear the “one percent” are doing just fine here. 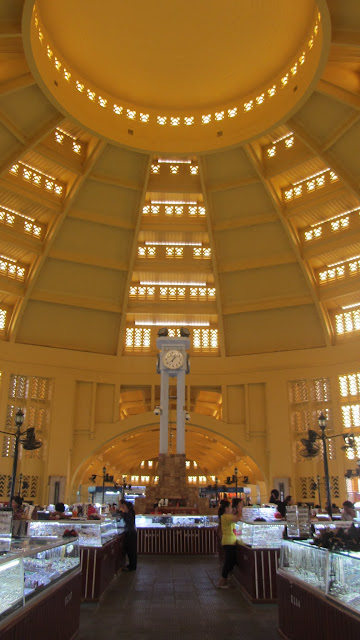 Eager to sample some local food, we took a walk down by the Mekong riverside. There, we found a restaurant specializing in amok, a mild, coconut-based, flavorful Khmer curry. It was knock-your-socks off delicious. Heather went as far as to say, “the perfect amount of everything…possibly the most amazing thing I’ve eaten in my entire life!” 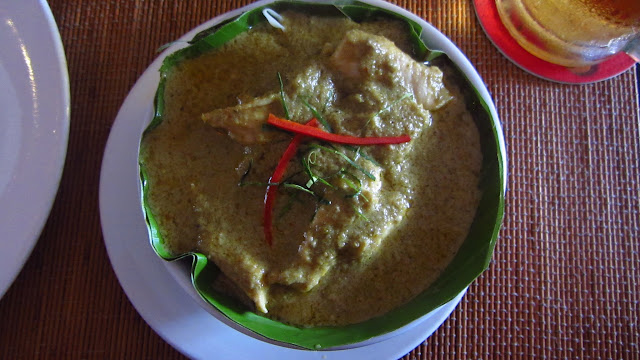 While in the area, we also checked out the National Museum of Cambodia, filled with traditional sculptures housed in a beautiful wood building. 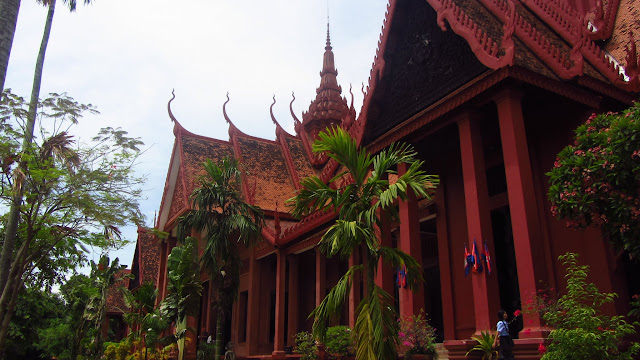 Unfortunately, a huge rainstorm interrupted our visit to the Royal Palace. We ended up hunkering down inside one of the palace temples, waiting for the rain to subside. When we were finally able to leave, the huge storm had flooded many roads and we still ended up completely soaked making our way back to the hotel. 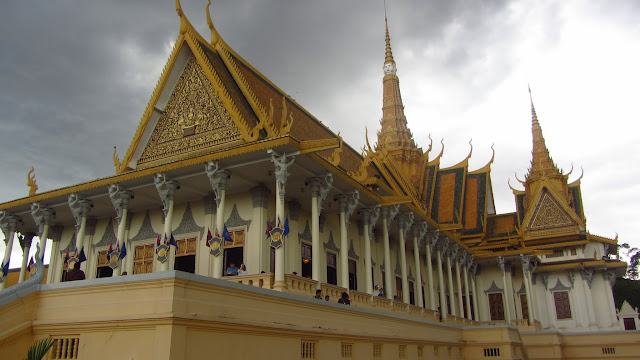 We took one full day in Phnom Phen to visit two deeply disturbing and depressing sites connected with the genocide perpetrated by the Khmer Rouge and Pol Pot. The first was the notorious former Security Prison S-21, now housing the Tuol Sleng Genocide Museum. 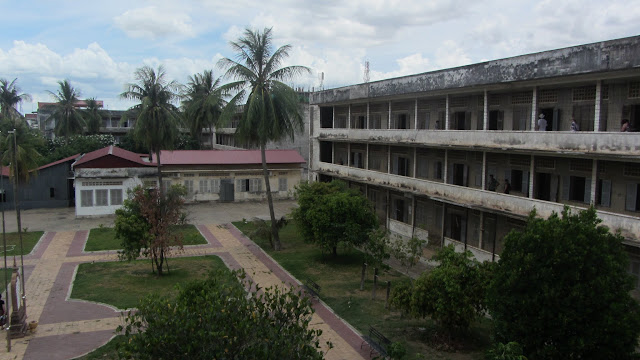 In 1975, the Khmer Rouge rolled the country back to “Year Zero”, vowing to completely destroy all history, cultural institutions, and rid itself of external, especially Western, influences. Intellectuals, teachers, doctors, engineers, monks, and other innocent people targeted by the Khmer Rouge were brought to centers like S-21 all across the country. The cities were evacuated and people were sent to communes in the countryside for “re-education”.

It is estimated that there were at least 150 execution centers like S-21 across the country. Here, prisoners would be subjected to unimaginable physical and psychological torture, and forced to confess to whatever crimes they were accused of. False confessions were produced and the prisoners were then sent to one of the killing fields to be executed and buried in mass graves. Of the 17,000 prisoners on record at S-21, there are only seven known survivors. 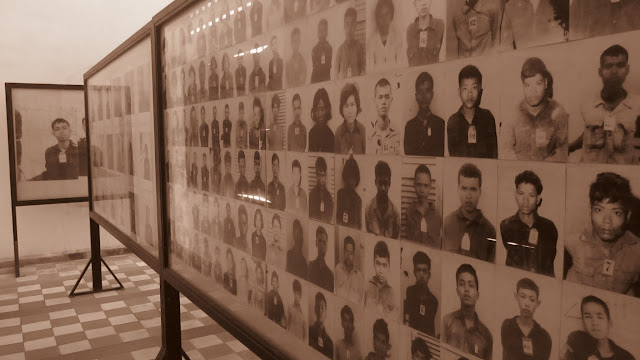 S-21 was built in a former high school, and from the outside it still looks something like a school. Wandering around the hallways and peaking into the rooms is a different story. Metal bed frames stand by themselves in some rooms – prisoners were often chained to them, beaten, and subjected to electrical shocks. 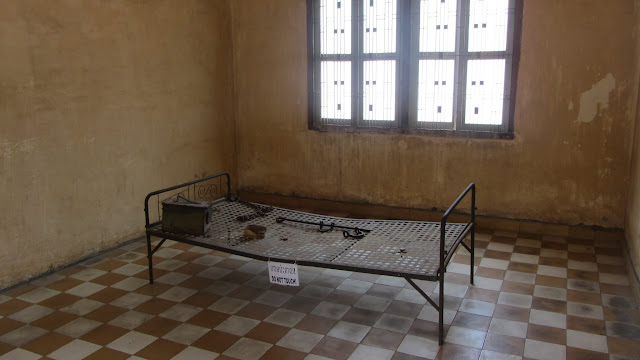 Other rooms were divided into tiny cells, where the prisoners would be shackled to the floor and left without mats or blankets. They were not allowed to talk to the guards or each other. 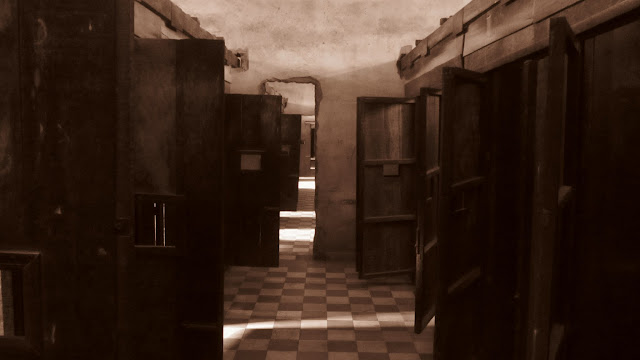 Large empty rooms served as mass cells, where prisoners were shackled together and left on the floor, sleeping head to toe.

With severe overcrowding, malnutrition, and unhygienic conditions, disease ran rampant within the population. But that was the least of the prisoners’ problems, since they were destined for the killing fields. 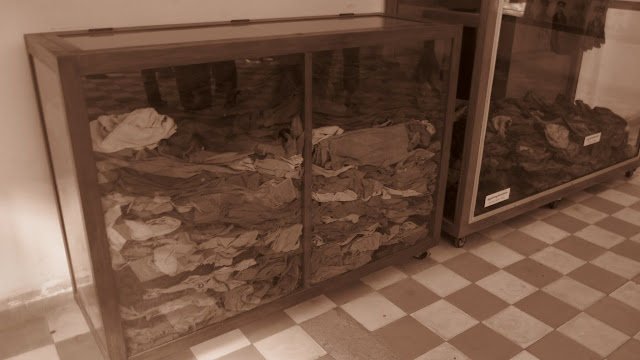 Following in their footsteps, we headed to the Choeung Ek Killing Fields, about 15km south of Phnom Phen.

The admission included an audio guide, providing chilling details on the executions that happened here:

They came here at night, starved and terrified, bound and blindfolded. They had been beaten and tortured. The road was rutted and bumpy.

They were told they were being moved to a new house. Maybe some held onto that scrap of hope on that dark and terrible drive. Maybe some thought of home, of food to eat, a future, seeing their families again. 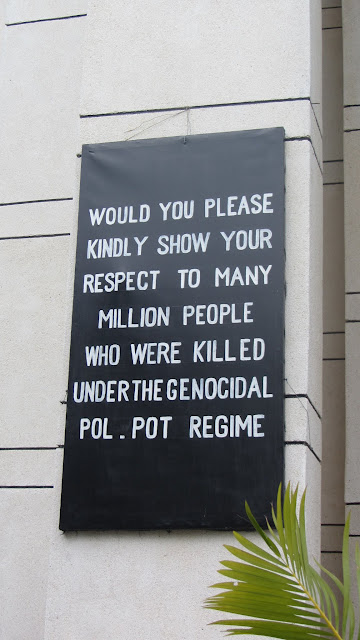 With loudspeakers blaring revolutionary communist songs to drown out the screams, victims knelt in front of open pits and were clubbed to death by Khmer Rouge guards. Bullets were too expensive, so they used whatever they could get their hands on such as axes, hammers, machetes, and poles. 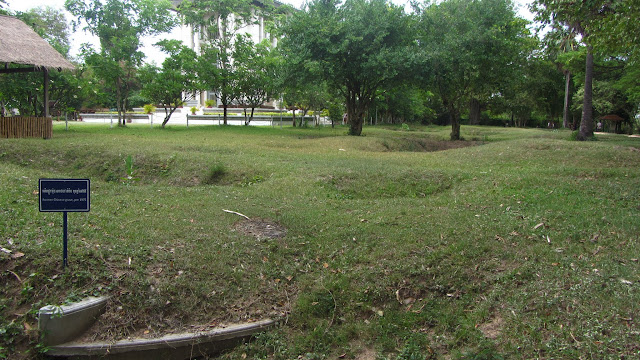 Approximately 9,000 bodies were found at this killing field, including many women and small children. Babies’ heads were smashed against trees. 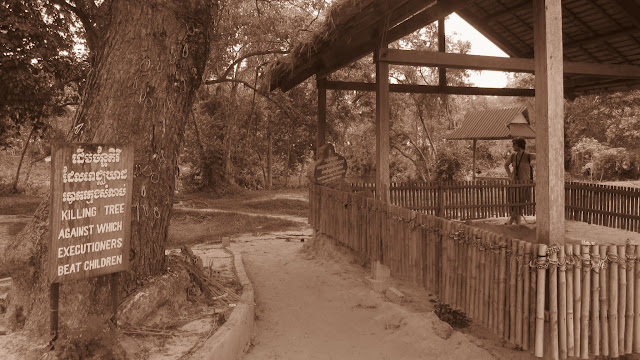 The bodies were exhumed, but countless bone fragments and bits of clothes still cover the site. 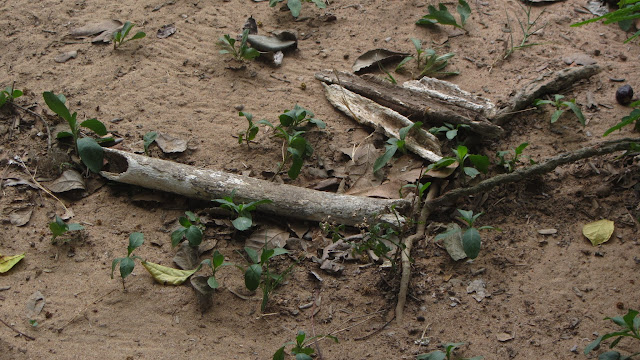 A Buddhist stupa containing many of skulls and bones exhumed from the graves was erected here in the late 1980s. 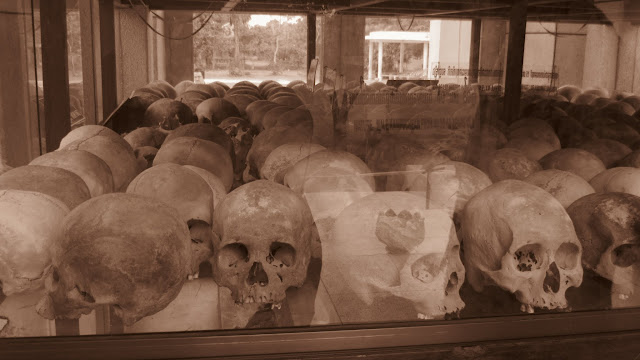 The Khmer Rouge killed an estimated 2 million people – approximately 30% of the population – through executions, torture, and starvation. Cambodians killing Cambodians. Miraculously, the people of this country have been able to pick up their lives and continue on. Still, we must remember the things that happened here, and teach others about it to make sure genocide does not happen again in the future.