There are two ways to get to Medellin, Colombia from the capital city of Bogota; 1) a quick 50 minute flight or 2) a grueling 10-hour bus ride through windy mountain roads. This huge time disparity is perfect illustration of just how mountainous Colombia is – while the straight-line distance between the two cities is only 150 miles, the windy roads up and down rugged terrain makes it an all day trek.

Of course, we took the bus. It was significantly cheaper than flying and we had dramamine to combat the vomit-inducing turns. Still, we were happy to make it to Medellin after a long day of travel.

We were even more happy to stumble upon Geo Hostel in the fashionable El Poblado neighborhood. The place was a tad on the expensive side, but was easily the fanciest hostel we have ever seen. Our private room was decorated in a sleek modern style with cable TV, A/C, and ensuite bathroom. It all felt more like a luxury boutique hotel than the usual scruffy old hostel. 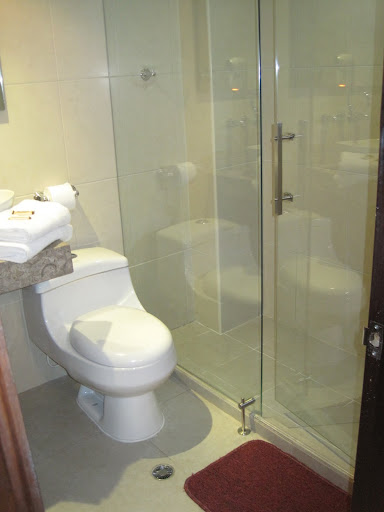 The first night we ventured out to the nearby Parque Lleras, which was packed full of happening bars, clubs, and restaurants.

Medellin is about 3,000 feet lower than Bogota, and we immediately noticed the warmer temperatures, even in the crisp evening. It’s no wonder they call this the “City of the Eternal Spring”.

During the 80s and 90s, the city was one of the most dangerous in the world, where drug cartels were waging open war against the government, terrorizing citizens, and fighting bloody turf conflicts among themselves. Since then, Medellin has turned itself around, thanks in large part to brilliant city planning and intelligent public works projects.

The modern, clean, and safe metro service is one such project which has helped revitalize the city. We were impressed by the quiet trains and spotless stations, which helped us zip around the city on the cheap. 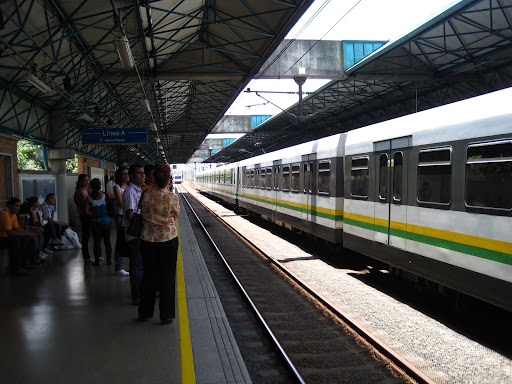 One of the most remarkable aspects of the metro are the integrated cable car routes. These cable cars stretch up the hills surrounding the city, connecting the impoverished shanty towns with the rest of the metro network. Known as the “Metrocable”, it has revitalized the city’s poor barrios, where it’s in part responsible for reducing crime, increasing employment rates, and spurring other cultural and educational initiatives. 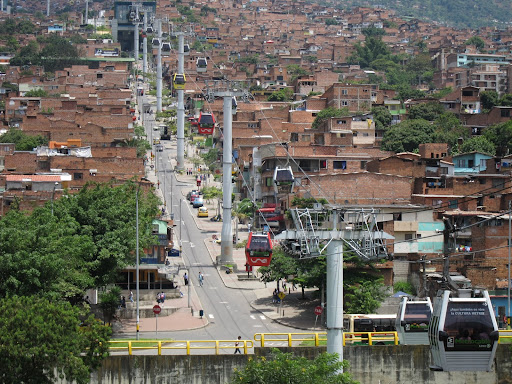 We took a ride up the Metrocable one morning, taking in a beautiful view of the valley below while silently gliding 30 feet over the densely populated hillside neighborhoods. Heather thought it was a little scary to be trapped in the small 10-passenger gondolas, but I thought it was a blast! 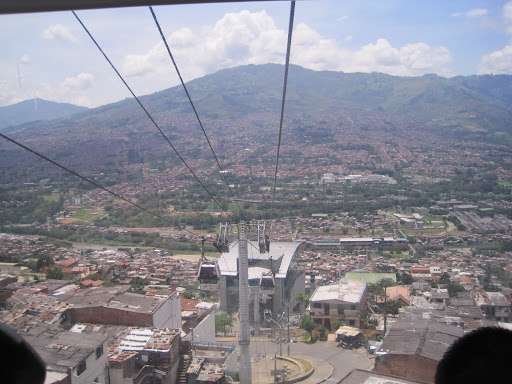 One day, we hopped on board a city tour, which brought us around the city’s squares, churches, parks, and other attractions. One of the most interesting sights, was the Parque de los Pies Descalzos (Barefoot Park), where visitors are encouraged to walk over small stones, through sand, close their eyes and navigate around a maze of small structures, and finish in a number of few small pools – all, of course, barefoot. 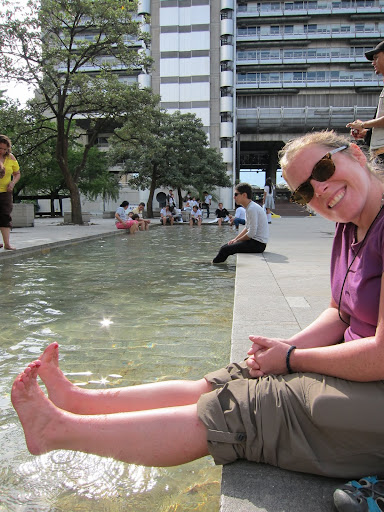 The tour concluded at Nutibara Hill, where we enjoyed sweeping views of the city. The hill also hosts an artificial village, Pueblito Paisa, which is meant to display the look of a typical village from the surrounding area around the turn of the 20th century. We found it a little cheesy, with the piped in music, souvenir stands, and kitschy displays. 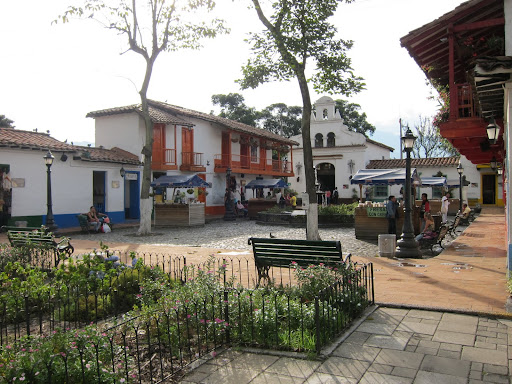 Other than visiting a few museums, we spent most of our time relaxing, catching up on blog posts (voila!), and enjoying the restaurants and nightlife around our hostel.

Two food items we were told not to miss in Colombia were the Hamburgers from El Corral and one of the hot dogs from almost any vendor, which are loaded with toppings such as bacon, potato chips, chilies, cheese, then drowned in a number of sauces. I finally had the chance to try both of these in Medellin. My verdict – unbelievable hamburger, but disappointing dog. I’ll be sticking to good old NYC dirty water dogs with onions and mustard, thank you very much. 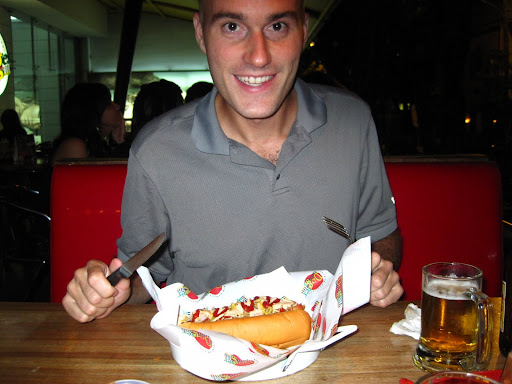 After five nights in Medellin, we were ready to move on to our final destination in Colombia, the nearby coffee-growing region, Zona Cafetera.

You can see all our photos from Medellin in the gallery.

2 thoughts on “The City of Eternal Spring – Medellin, Colombia”