We sprang for the upscale seats on the overnight bus to Cuzco, but boy – was it ever not worth it. No food, as was advertised, and our pricy seats, which were in the back row, did not recline as far as they should. But, the short man sitting in front of Erik was as happy as a pig in s**t as he layed back at a comfy 180°, which meant Erik couldn’t move at all. It was by far our worst overnight bus yet.

Once we got to Cuzco, we had even more hurdles to climb as the hostel we were to meet our friends in had no room for us, and we proceeded to walk up and down Cuzco’s many steep streets with all of our bags in tow at 6am. After 5 or so tries, we finally found a place to crash in the hip neighborhood of San Blas. The cobblestone streets, gorgeous churches, beautiful main square with the huge fountain and the old Incan walls scattered throughout the city make this quite a charming place. However, the inflated prices, women asking to give you massages on every corner and amount of people speaking English made this one of the most touristy cities we’ve been yet. 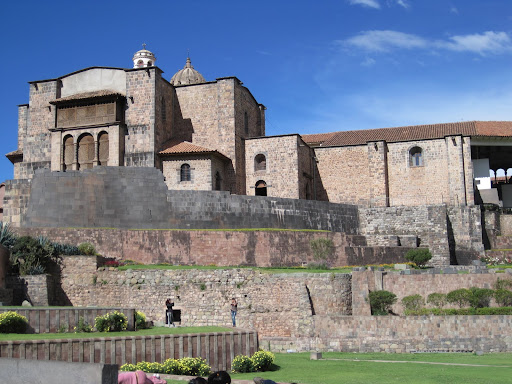 We spent a good chunk of time in Cuzco. We went on a city tour where we saw four of the ruin sites in the city. We had no idea how many ruins there were in Cuzco, but found out from our wonderful guide Karen that since it was the old capital of the Incan empire, there were nearly 4,000 ruin structures in and around Cuzco! One of the most impressive was Sachsywaman (pronounced “sexy woman”), where gigantic rocks were used – some weighing in at over 70 tons! 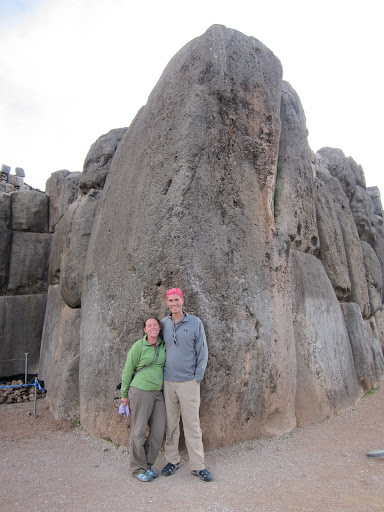 As we realized we would be in Cuzco for Thanksgiving, I went to the Internet to see if we could find other Americans who found themselves in town as well. After posting a message on Couchsurfing, I got a nice response back from a Peruvian woman who was making dinner for her American husband who’s from NJ. She said we were more than welcome. After switching hostels and dropping our stuff off with Ludwig, the quirky but kind owner of Frankenstein Hostel, we ran to the supermarket to try and get the necessary items for the dishes we’d bring to the feast. I had my heart set on making my traditional corn pudding dish, but even in Peru, the land of corn, we had a hard time finding the canned creamed corn and whole kernel corn we needed. We eventually found it, but had to pay over $2 a can for it! Erik bought ingredients to make his first-ever stuffing, and I bought some canned peaches and rum to make a glazed peach dessert. 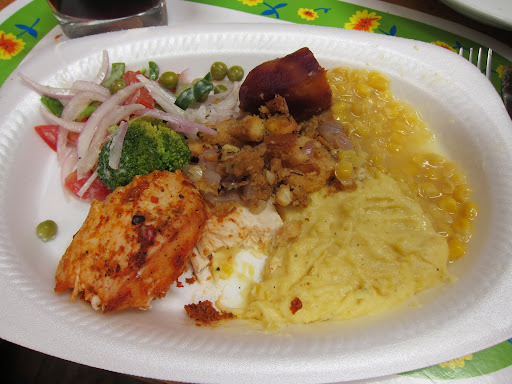 We rushed back to the hostel to take over the kitchen and quickly whip up our Thanksgiving dishes. We had to improvise a bit, but we were happy with the results and hopped in a cab to head to the feast.

Susan, the Peruvian, and her husband Jeff, were welcoming hosts and travelers from all over the world sat down for the meal. 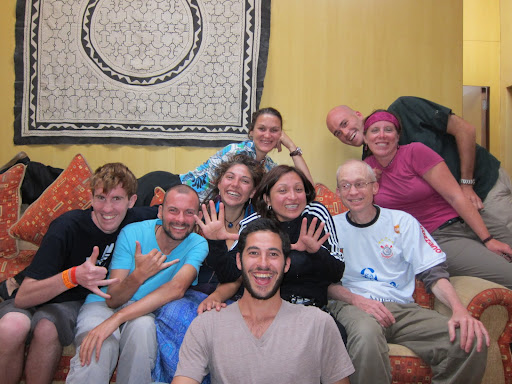 There were only two other Americans there, but we had a really nice meal of a nice spicy chicken (no turkeys in the supermarkets in Peru), stuffing, sweet potatoes, mashed potatoes, my variation on corn pudding, salad and bread, along with some nice wines. I was glad I’d made the glazed peaches, because Susan gave up on attempting an apple pie, so the peaches were the only dessert. It wasn’t the Thanksgiving we were used to and we were definitely missing our families back in the States. But, this celebration was nice, too, and we were glad to have made some new friends.

2 thoughts on “Thanksgiving in the Land of the Incas – Cuzco, Peru”