Even though we had visited the temples of Angkor Wat, Cambodia just one week before, we were still excited about our trip to Bagan in Central Burma. This ancient city was the capital of the once huge and powerful Kingdom of Bagan, which unified the regions that make up modern day Myanmar. Along with the Khmers in Cambodia, Bagan represented one of the two main empires of Southeast Asia.

As the seat of a proud and prosperous kingdom, its rulers constructed thousands and thousands of Buddhist temples. At its height around the year 1200 AD, the city was home to some 14,000 stupas, temples, monasteries, and shrines. After repeated invasions by the Mongols, Bagan collapsed in 1287. Power shifted to other parts of the country and Bagan was reduced to ruins due to years of neglect, earthquakes, and the natural elements. Today, there are roughly 2,000 temples left, spread across 40 square miles on the dry and dusty plains alongside the Irrawaddy River. 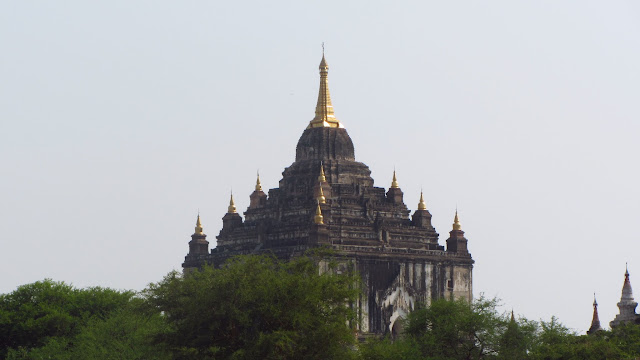 After hearing lots of horror stories about bus travel in Burma, we were very surprised to arrive ahead of schedule on our nightbus from Yangon, rolling into the dark and desolate town at 3.30am. We had called ahead to reserve a room at a recommended guesthouse, but all the lights were off and nobody was answering the door. With few other options, we tried the neighboring Pyinsa Rupa guesthouse, where we were shown to the most awful room either one of us had ever seen. Every surface was absolutely filthy, and I wouldn’t be surprised if a serial killer had carved up victims in the rust-stained, cracked bathtub. We cocooned ourselves in our sleep sheets and tried to get some sleep.

The next morning, we transferred to the far superior May Kha Lar, where we had originally made a reservation. The friendly and helpful owner got us set up with the required archaeological passes and helped us hatch a plan of attack for visiting the temples. It was the month of May, and it was very, very hot. Still, we decided to spend our first day cycling to some of the closer ruins and using the second day to hit some of the further sites using a horse and buggy. 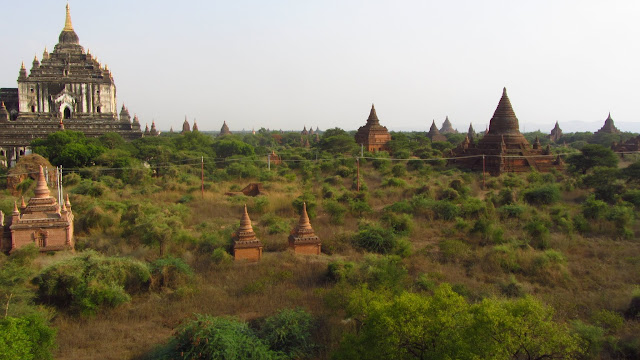 With the sun’s noontime rays beating down on us, we picked up some old rattling bikes from the guesthouse and set off for the 5km slog to Old Bagan. While the terrain was relatively flat, it was hot, sweaty work. Eventually, we made it past the old city gates and pulled up to Ananda Temple, one of Bagan’s biggest and holiest temples. 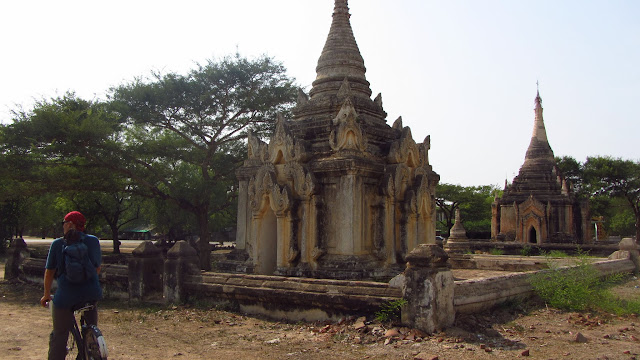 Slipping off our shoes, we checked out the four standing Buddhas inside the temple, each facing one of the cardinal directions. 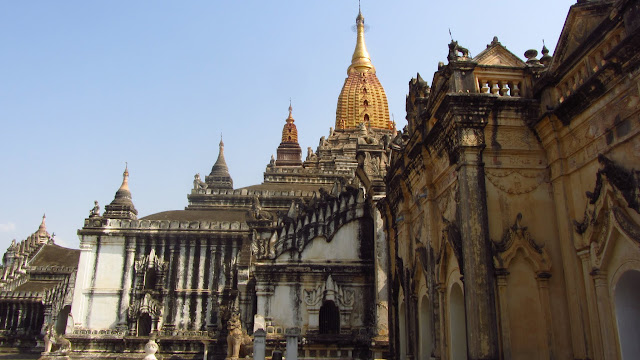 At a nearby temple, where we were able to climb to the top and enjoy a view of the temple-dotted landscape. 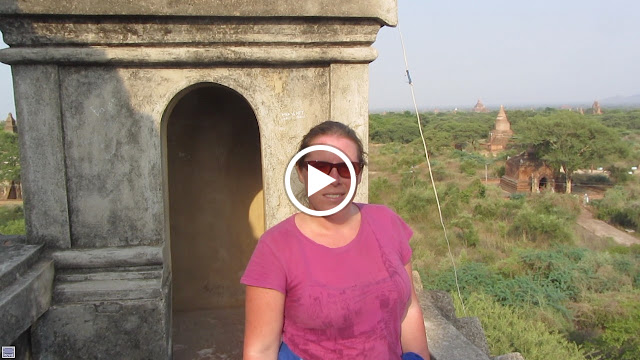 After checking out a few other temples in Old Bagan, we hopped back on the bikes and started off-roading through some horrendous loose gravel and sand in a mad dash attempt to make it to one of the smaller temples recommended to us for the sunset view. 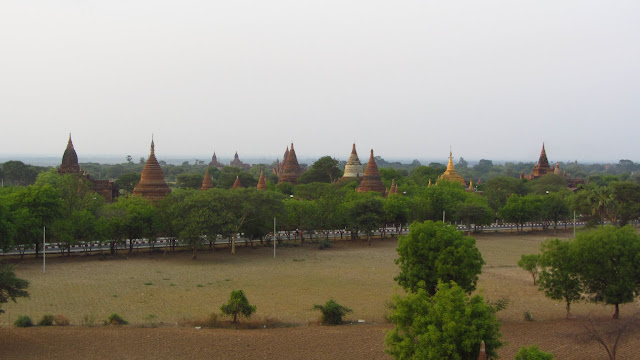 Eventually, we made it there and climbed to the top. Unfortunately, some clouds rolling in obscured what otherwise would have been an awesome view. 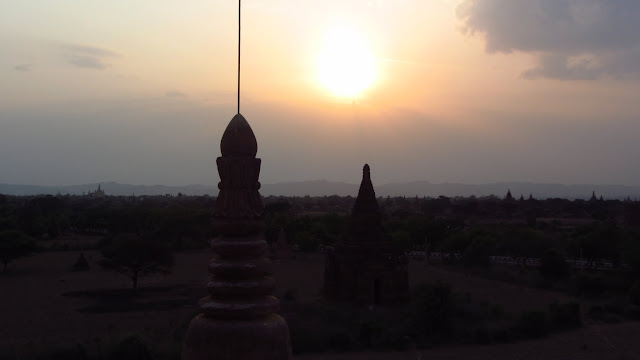 Unlike Angkor Wat, which is absolutely crawling with tourists, we felt like we had Bagan to ourselves most of the time. At the top of the sunset temple we did meet a guy from Colorado, who happened to be staying at our same guesthouse. We decided to go in together on a horse and buggy rental for the next day. 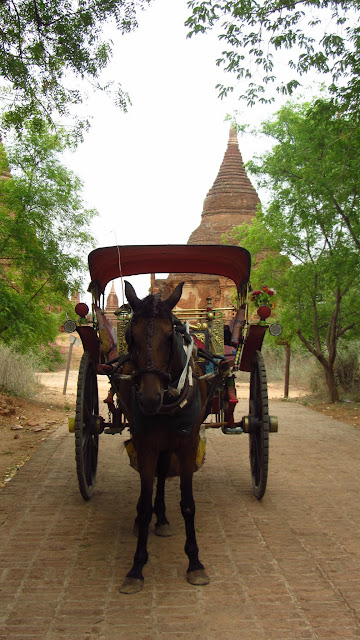 We all took turns alternating positions in the bumpy carriage, even though it was almost equally uncomfortable anywhere in the small cart. Our driver and guide had obviously been chewing too much of the betel nut – his teeth were all messed up and stained a deep hue of red – but he was a friendly guy who was more than eager to oblige when we would say “let’s visit that place!” on a whim. 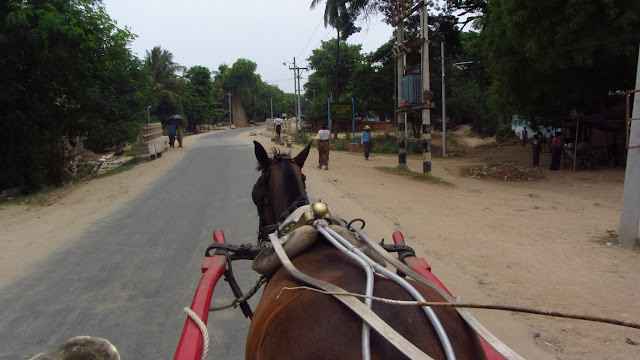 At one stop, we struck up a conversation with Pupu, a happy lady selling postcards and other tourist knick knacks. Like most women in Burma, she was wearing thanaka paint on her cheeks. This cream is made from ground bark and acts as a natural sun screen and bug repellent. Pupu offered to paint up our faces, which we just couldn’t resist. 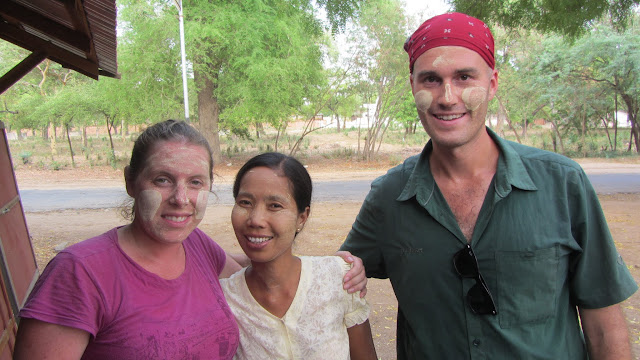 We visited many more temples. It would be impossible to remember their names or too many unique things about each one. All the temples at Bagan are fairly similar. Some are tiny, some are large, but they all maintain the same basic shape and usually contain Buddha images inside. 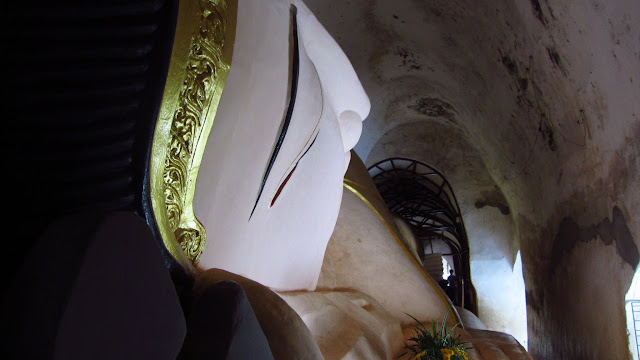 One of the more scenic stops was Buphaya Paya – a large gold-covered stupa sitting on the banks of the Irrawaddy River. 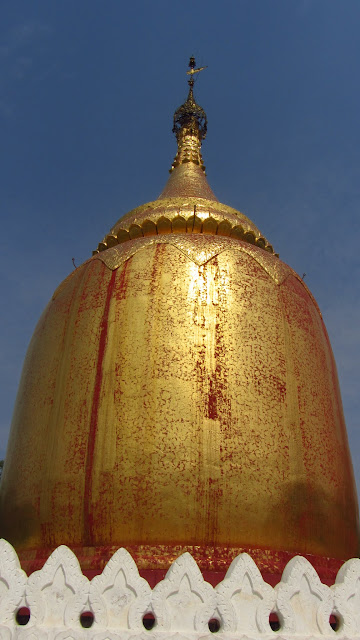 Finally, we visited a tall temple, hoping to catch a nice view of the sunset. There was a great view over the endless expanse of ancient ruins, but sadly the sun was hidden behind clouds the whole time. 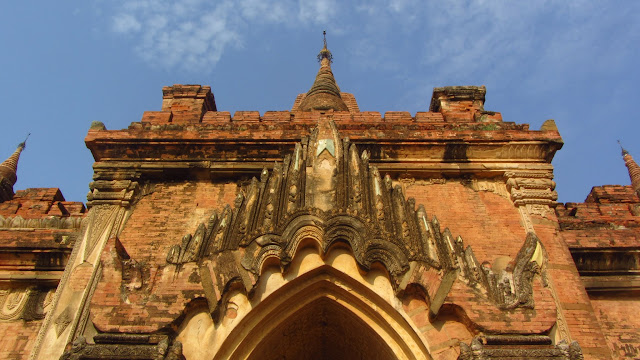 We ended the day over dinner and drinks with our new friend from Colorado before heading back to the guesthouse, getting an early night’s sleep to prepare for our trip to Mandalay the next day…