The roads in much of Bolivia are notoriously terrible. The majority are unpaved, dirt roads that curve around mountains with sheer drops (like the Death Road). Although we’ve had many scary, winding bus rides, the ride from Tarija to Tupiza was the most memorable to date. Our guidebook warned us the ride was an extremely rough one, so we were sure to take our usual motion sickness pills.

At 2am, a few hours into the roller coaster-like ride on a bumpy dirt road, the bus came to a complete halt. Now we knew there couldn’t be traffic at that time of night, so we thought something was up. None of the bus drivers said a word, except a warning to be careful of the sheer cliff drop just a meter from the door, should you want to exit the bus. When I got out to use the natural facilities, I saw what he meant. With my headtorch shining, I could see the sheer drop into the abyss. I walked towards the mountainside and did my business, not having to worry if anyone could see me since all around us was complete darkness. We sat there for at least an hour and a half, engine and lights turned off. Most people slept through it. I tried to, but I was worried about what was going on as people got on and off the bus with flashlights seeming to plan some kind of maneuver. 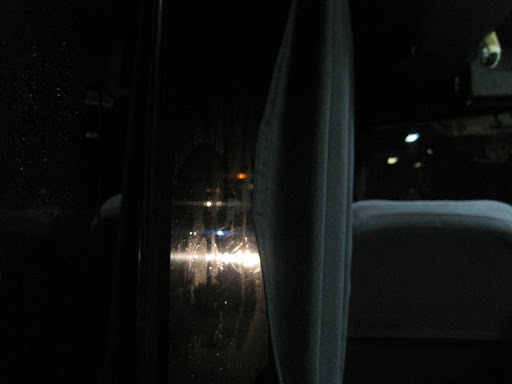 When I went out a second time to use the facilities, I knocked on the window and woke up one of the drivers to ask him what was going on. He told me the road was unpassable because the rain had caused a landslide on the dirt “highway”. Great news. At least I now knew what was going on.

Finally, an hour later, the engine started up and we started passing the huge line of vehicles and other buses that were waiting in line. Apparently, during that time, guys from the buses were shoveling and moving the dirt from the landslide to make it passable. This is one thing I have absolutely loved about this trip. People in South America are very self sufficient. We’d encountered a fallen tree blocking a road in Ecuador; the people worked together and had it moved within minutes. This time, it took a bit longer, but these guys literally moved a mountain.

Somehow, our driver had either been chosen or volunteered to be the cowboy to try to pass first. With all passengers still on board, we were about to make the first attempt. I kept telling Erik, “we should get off this bus.” It is not uncommon here for buses to go off of cliffs, so my concerns were valid. We all held our breath as the bus tried to scale this hill. We got stuck a bit and then the driver slammed on the gas while turning the wheel quickly to get us around this huge mound of dirt. All the while, the bus is tipping at a very steep angle towards the cliffside. Somehow he did it! We all breathed a sigh of relief as the drivers gave each other high fives in celebration.

Later on, the driver asked us passengers to get out and help move rocks that were blocking the way. In the end, we made it to Tupiza safely, but we kissed the ground when got there.

Here’s a little video showing what the twisty bus ride was like once the sun came up:

We found a nice affordable room at Hotel Mitru which even had a pool. Very nice for the hot afternoons. The strike was still on in Bolivia. I tried to order chicken for lunch, but was told there was no chicken in Tupiza – the strikes and high gas prices meant shipments heading to Tupiza were rare.

While searching for a tour of the Salt Flats, we decided to do a triathlon tour of the area – via jeep, horse and bike. The landscape is gorgeous here. Multicolored mountains and rock formations unlike anything this East Coast girl had ever seen. Highlights were the incredible rock formations and an old tunnel through rock which had been handmade (we drove through it twice). No idea how busses still make it through there. They were finishing up a new tunnel that was still under construction. 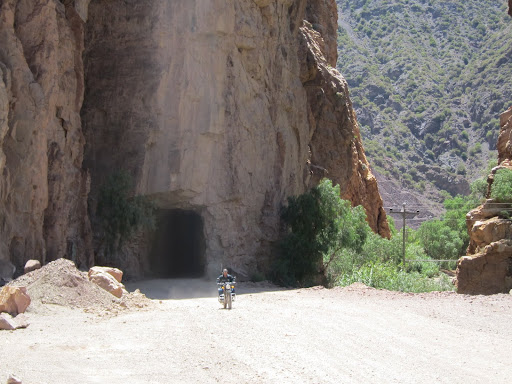 Our driver prepared us a nice lunch near a riverbed and we had a fantastic view of the valley. After lunch, we hopped on our horses. They were nowhere near as fit and well-cared for as Holger’s horses in Ecuador, but it was a fun afternoon. The ride was very easy, pretty much flat the entire way, but the scenery was breathtaking. 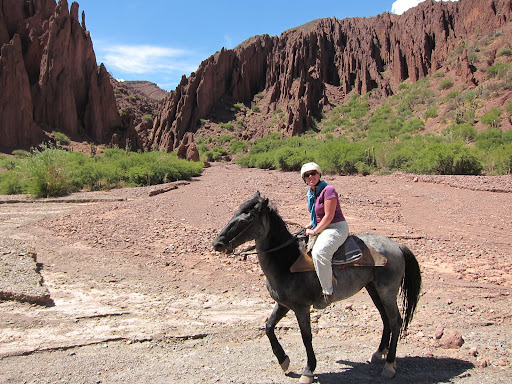 Then, as the grey clouds rolled in and thunder rumbled about, it was time for the bikes. This is the part I was worried about. I hadn’t done the Death Road for a reason. The bikes weren’t great and the road was definitely not “all downhill” as advertised. At one point in a busy part of the road, a truck beeped as he passed me while a car was heading towards us from the other direction. In this equation, biker loses. So, I got pushed into a ditch and fell off my bike into a thorny bush. I was fine – just a few scratches and bruises, but I was not a happy girl. The views were great, but we don’t have many photos since we were on the bikes. 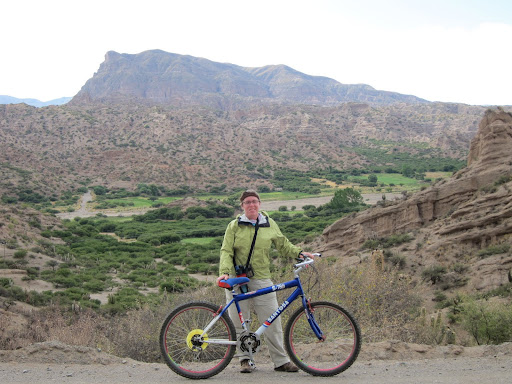 All in all, it was a fun-filled day in Tupiza. Next time, our journey takes us into the magical deserts and Salt Flats of Uyuni.

3 thoughts on “Surviving the Bus Ride from Hell – Tupiza, Bolivia”