While planning our trip Around This World in New York, we decided it would be a good idea to learn Spanish. Erik had studied Spanish in high school, but after years of not using it, had forgotten nearly all of it.  I had taken several years of French throughout middle and high school, and in my years of training as a classical singer, I had learned Italian and German, as well.  But, I had never learned any Spanish.  It is a very useful language – surprisingly Spanish is the second most natively spoken language in the world (after Mandarin Chinese and before English)!  Since we were planning on travelling for nearly 9 months in Spanish-speaking countries, it seemed like a very good idea to learn it.

We started taking Spanish classes at ABC Language Exchange in New York in October. We learned a lot, but found it tough to really learn and speak easily when only using it once a week for two hours. I love languages and picked it up fairly quickly, but found understanding Spanish was much easier than speaking it.  I’m sort of a perfectionist when it comes to languages, and found remembering all the verb conjugations a bit difficult.  I was a bit timid when speaking in our class in NY.  But once we got to Merida, Mexico, our Spanish was finally put to the test. 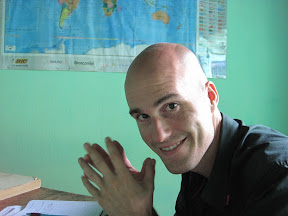 We knew that we wanted to study Spanish further in an immersion/homestay at some point and thought the earlier, the better.  Antigua, Guatemala is well known for its Spanish schools, so since it was on our itinerary, we decided to study there.  There are dozens of schools there, so once we arrived in Antigua, we visited a few schools and decided on the well-respected Antigueña school. It built up a strong reputation over the years, as the director of the school proudly pointed out by pulling framed articles one after another from the wall of accolades. I started getting a bad feeling then. We should have listened to that bad feeling.

The school seemed nice and after some long discussions, we decided to go with Antigueña. We moved into our homestay on the Saturday before classes began.  The Sactic family was absolutely amazing. We had read previous students’ comments about the families and read that the Sactics were incredible, so when we saw the name on the sign next to the front door, we knew we were lucky! The program cost included accommodations & meals. Eva, our host mother, was an incredible cook. We loved every meal – especially her delicious frijoles volteado – her own blended creation of black beans, onions & garlic. How could something with such simple ingredients knock our socks off meal after meal? 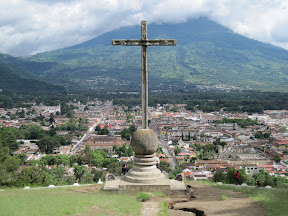 Since Erik and I were at basically the same level with Spanish, we decided to study with one teacher. The first day went really well.  We jumped in head first – the instant immersion into four hours of Spanish a day was intense, but we managed to keep our heads above water. Two hours of conversation to see where we were at were followed by two hours of grammar. We chose morning classes, so I could attend the “school field trips” in the afternoons (to further immerse ourselves in the language in “real-life” situations).  Erik was able to join the tour to the macadamia nut farm, where we took advantage of the torrential downpour by sampling their famous macadamia nut spread on pancakes (rich, but divine). I also enjoyed a macadamia oil facial massage. Other field trips included a hike up Cerro de La Cruz – a mountain that offers incredible views overlooking Antigua and the surrounding towns, and a visit to the ruins of La Merced church – one of the 20 or so church ruins scattered throughout the city. Throughout the years, earthquakes have destroyed these churches and their ruins have been left behind. It was so unique and beautiful to see a different ruin reaching towards the sky at each corner and see the power that strong earthquakes can have on a city. 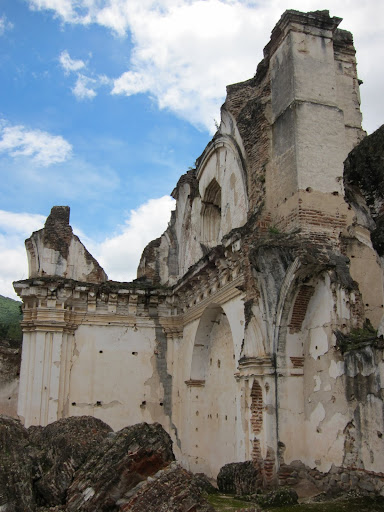 I have to be honest – in the end, I think we may have made the wrong choice in our school. But we had a wonderful home-stay – the family was incredible and we were lucky to make some good friends with other students in the house, too. Eva and Cesar have been hosting students in their home for over 20 years. They and their children, Mariel and Samuel, were amazing – very warm and welcoming. We were forced to use our Spanish and, honestly, we found the home-stay more educational, more valuable and more fun than our classes. One of our favorite moments was sitting around the table listening to Eva tell stories about past students over the years – we all laughed ourselves to tears! Our Spanish is now good enough to help us haggle a lower price at a market, purchase bus tickets (sometimes at a lower price than advertised – who knew you could haggle with bus tickets?), call out a taxi-driver when he’s trying to overcharge us, and find directions to our next hostel. We’ve even been in situations where other travelers who don’t speak Spanish look to us to help them translate and communicate. All in all, we learned a great deal more Spanish and made some wonderful friends along the way.

To see all our photos from Antigua, Guatemala, click here.