We’ve carried a lot of different cameras during the past three years travelling around the world. At last count: four different point-and-shoots, one DSLR, and the Sony RX100, which deserves to be in a class all by itself.

Photos are without a doubt the most important memento we take away with our travels. As long term backpackers, we neither have the space nor inclination to pick up traditional souvenirs. Instead, we will be reliving our travels and sharing our stories with the help of the photos we take. Why settle for crummy ones?

There really are three different format cameras a traveler can take with them: your standard point-and-shoot, a huge honking DSLR, or one of the newer hybrid micro “mirrorless” cameras (which come with interchangeable lenses like a DSLR but a scaled down body without a viewfinder).

Which format you pick ultimately depends upon what you plan on shooting. 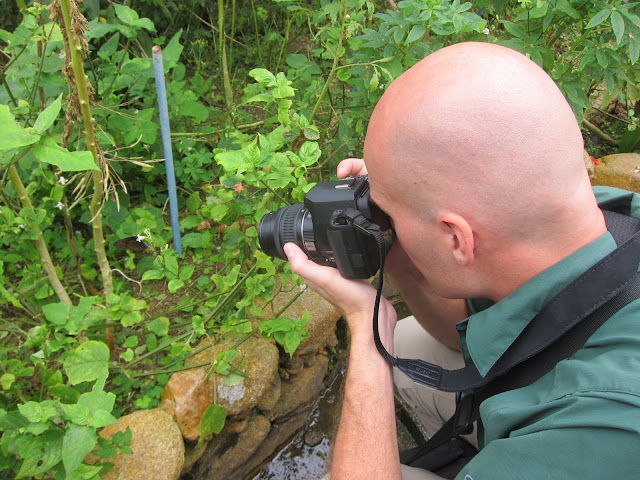 Going on safari in Africa? Bring a DSLR with a long lens. It’s the only way to get those National Geographic style pictures.

Do you work indoors, in small rooms, with big groups of people? Then it might make sense to get a micro with a wide-angle lens.

And then, there is the lowly point-and-shoot. This is generally not seen as a format for getting “professional” results, due to the trade-offs made between image quality and camera size. DSLRs are designed to be big, and this has a huge advantage – they allow more light to enter the lens and contain larger sensors to capture the image.

We have previously owned the Canon S90 and it’s newer cousin, the S100. When we left home in 2010, the S90 was widely regarded as the best point-and-shoot on the market. This series of camera has a larger sensor (1/1.7″) than the average compact camera (1/2.3″) along with a “fast” f2.0 lens. In addition these cameras have ring controls and lots of manual control options like those found on larger cameras.

We were fairly happy with our Canon cameras. The S90 lasted a little more than a year, before condensation started producing fuzzy images (we think due to water which found its way in at the magnificent Iguazu Falls, Argentina).

In Malaysia, we bought a replacement S100 from Low Yat Plaza. Things were going great until just a couple months later when we got to Vietnam and the camera started giving us the dreaded “lens error” problem rendering it completely unusable. Since we were in the middle of our travels, it was impossible to send the camera in for servicing, so we were stuck with a dud. It turns out this “lens error” is a very typical problem for Canon that’s been going on for years. While Canon ultimately fixed the S100 back in the US (for free), I decided it was time to look into different cameras.

The next phase of travel would involve a visit to India – a colorful and hectic place and one that I wanted to properly document.

After researching Canon alternatives, I discovered the Sony DSC-RX100. This camera has an enormous 1″ sensor – three times bigger than those found in Canon’s S90/S95/S100 series.

A colorful flower market in Bangalore, India captured by the Sony RX100.

On top of that there are some other features which I find particularly useful for travelers:

Instead of having to lug around a separate charger, the RX100 can be charged using a standard micro USB cable, like those used with many smart phones. We have previously lost batteries and chargers while traveling (easy to forget when plugged into the wall at a hostel somewhere), and these can be extremely difficult to replace on the road. But, a standard micro USB cable can be picked up pretty much anywhere.

You can train the RX100 to recognize your face (or a group of faces) and then put it into a mode where it automatically takes a picture whenever it is pointed at a face it recognizes. This is so much faster and easier than setting a timer to take pictures of yourself. Combine this with a telescoping camera extender like the XShot and you can take some amazing self portraits.

Instead of the laborious “stitching” method of composing panoramic photos, Sony gives you the option of simply holding down the shutter button and sweeping the camera around in one direction to capture panoramas with ease. I’ve found myself taking many more panoramic photos this way and have been extremely pleased with the results. You can sweep up, down, or to either side, choosing between a normal or an extra-large panorama.

I’m famous for taking slightly-skewed photographs. What seems like completely flat and level when I’m taking it always is off a few degrees upon closer inspection on the computer. Luckily, the RX100 solves this problem with a level indicator. Simply line up the red lines until they turn green and you have yourself a completely level shot.

There are so many other great things about this camera. Silky smooth slow-motion video with Sony’s SteadyShot? Check. High-speed continuous shot mode (up to 10 frames per second)? Check. Focus peaking with customized colors to easily spot in-focus areas of the frame? Check.

I could go on and on…

Unfortunately, all these great features come at a cost. The Sony RX100 retails for $650, making it as expensive as many entry-level DSLRs. But if portability and size are important to you, this is the camera to get. Many of the pictures will be just as good as those you could get with a much larger DSLR and you can’t beat the freedom of carrying such a small camera.

While I am by no means an expert photographer, I’ve been blown away by some of the pictures I’ve been taking with this camera. As I start blogging about my time in India and Nepal, I’m sure you’ll notice the improvement in photo quality. Stay tuned!

Got a ton of extra money burning a hole in your pocket and want something even better? Grab the Sony RX1 – an amazing compact, full-frame camera. Price tag: $2799 (ouch!).