Following our introduction to Argentina’s Patagonia in the beautiful mountain town of Bariloche, we boarded an overnight bus to cross a vast expanse of nothingness towards a very different part of the region – Puerto Madryn. There, on the Atlantic coast, a huge array of wildlife can be found in and around the ocean, including Southern Right Whales, Orcas, Magellanic Penguins, Comerson’s Dolphins, Sea Lions, and Elephant Seals.

Sadly, we weren’t in season to see the whales, which pass by this area between October and December, and can be spotted just a few meters from a few long beaches around Puerto Madryn. Luckily, there were many other animals to see in the area while we were visiting. 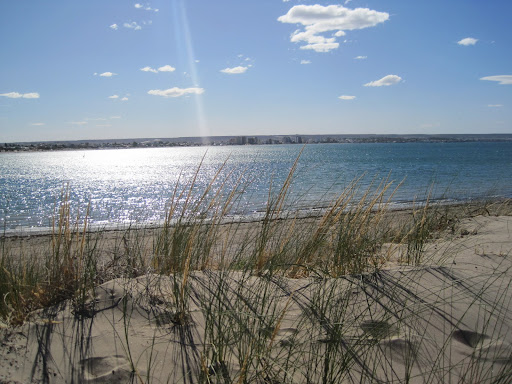 During our first day in town, we walked along the sunny beach, stopping for lunch and drinks right next to the water. A couple people had told us that Puerto Madryn was a dump and not very interesting, but we immediately disagreed and found it very attractive and relaxing! 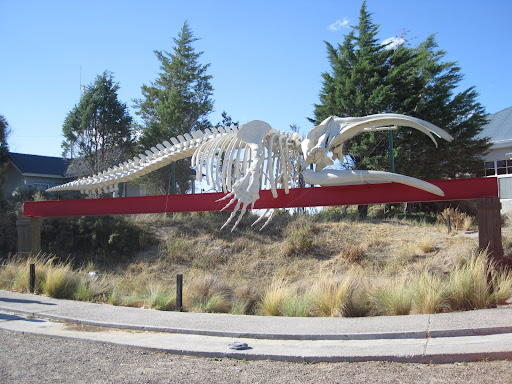 We took a long walk along the beach to the edge of town in order to visit the EcoCenter, an interactive sea life information center perched on a cliff overlooking the bay. It was a good introduction to the area, as we learned about many of the animals we would be seeing over the coming days. 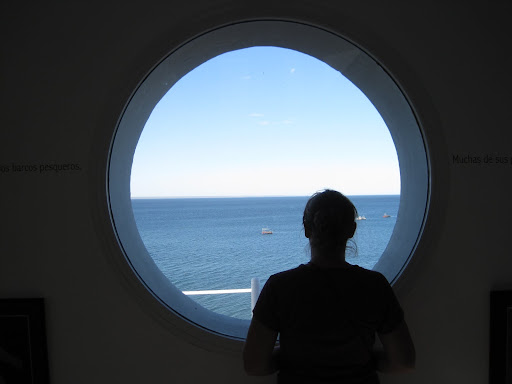 Our first excursion took us an hour south, to the port of Rawson. There, we boarded a little boat next to a small colony of sunning sea lions in order to search for Commerson’s Dolphins. 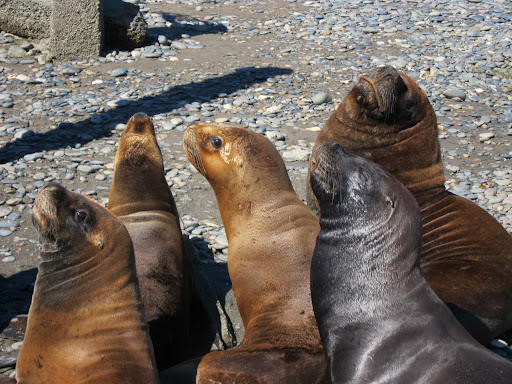 These rare dolphins can only be found in one other spot in the world (the remote Kerguelen Island, near Antartica) and only grow to 5 feet long. They actually look like miniature Orcas, with a similar white body covered in black splotches. 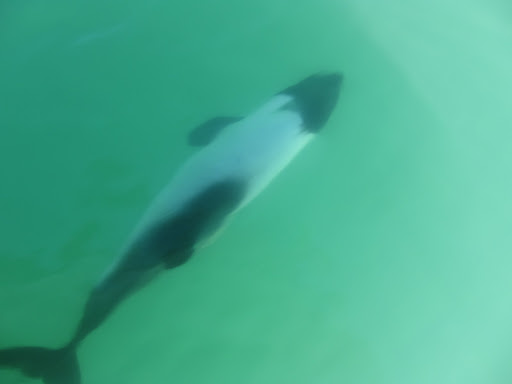 In addition to being very small, they are also very fast, reaching speeds up to 35 mph! We were lucky to spot 5 or 6 dolphins zooming around, some of which chased our boat in front and along the sides. It was fun looking overboard as they darted back and forth, quickly surfacing every few minutes to take a breath of air. 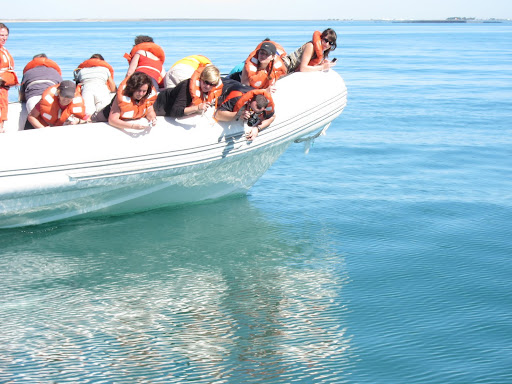 Next, it was time to visit Punta Tombo, home to the largest single penguin colony on the South American continent. Each year, approximately one million Magellanic Penguins come here to breed, beginning in September and lasting through early March, when the new chicks take to the water for the first time.

It was extremely hot the day we visited, and strange to think we were seeing these cold-water creatures in 90-degree heat. As we followed the path approaching the nests and large population near the beach, we spotted the first few penguins, which appeared to be suffering from the scorching temperatures. Many were hiding under bushes and panting loudly with their open beaks. We wished we had ice cubes to throw them! 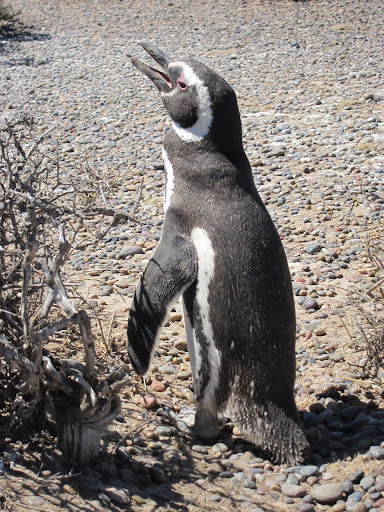 As we continued down the path, we began seeing many more penguins. Some were just chicks, which were still in the molting phase, where their fuzzy baby feather shed and make way for the classic “tuxedo” black and white colors they are so famous for. 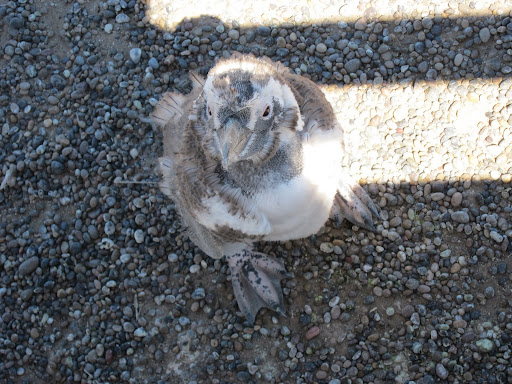 After hatching, the chicks stay on shore while their parents search for food, which they feed to the chicks through regurgitation. The penguins grow fairly fast, and most of the chicks we saw were the same size as their parents – about 2 feet tall. 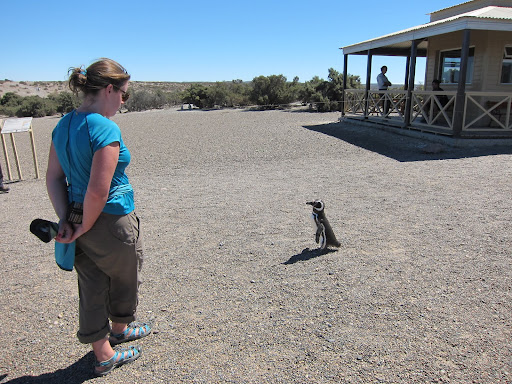 At points, penguins crossed the path and walked right next to us. Some were very curious!

In other places, small bridges were built over busy sections, where dozens of penguins could be seen flowing in both directions. 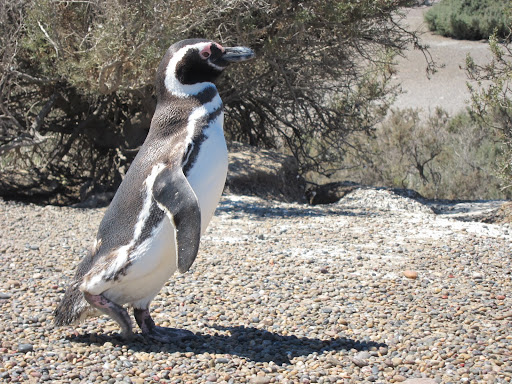 Unfortunately, they do not allow you to get close to the beach, where most of the penguins were cooling off in the water. We could make out a huge sea of black and white dots hobbling around and swimming in the water from one of the vantage points. 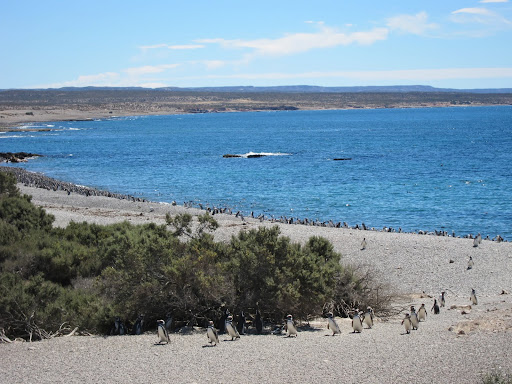 Having gotten our fix of penguins, we decided to book an excursion to Punta Loma, where hundreds of South American Sea Lions can also be found breeding and looking after their new pups. Here, though, you can get even closer – in fact, you can snorkel with the playful sea lions in the frigid water! 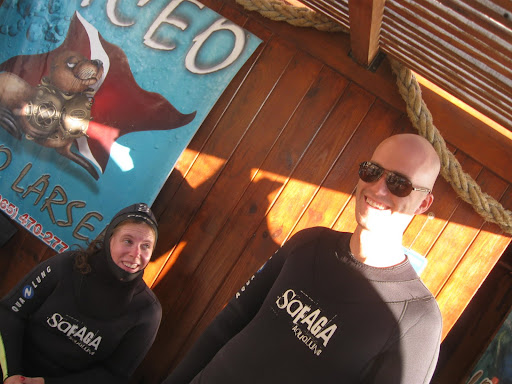 While we had already had the chance to snorkel with sea lions in the Galapagos, we couldn’t resist doing it again. The sea lions in this part of Patagonia are supposed to be particularly tame and curious, and luckily there are no Killer Whales or Sharks in Punta Loma!

We booked this activity with Lobo Larsen, which were absolutely fantastic. They provided all the necessary equipment, including very thick wetsuits, boots, and hoods, and expertly guided us around in the water, sharing the best tactics to make the sea lions approach. 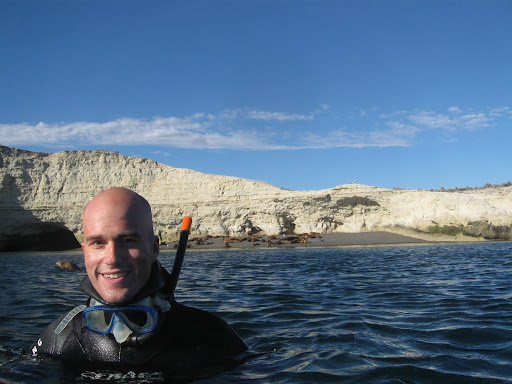 After a 30-minute boat ride, we dropped anchor in Punta Loma, greeted by barking sea lions and crying pups. The water was smooth but definitely cold – the thick wetsuits were appreciated! 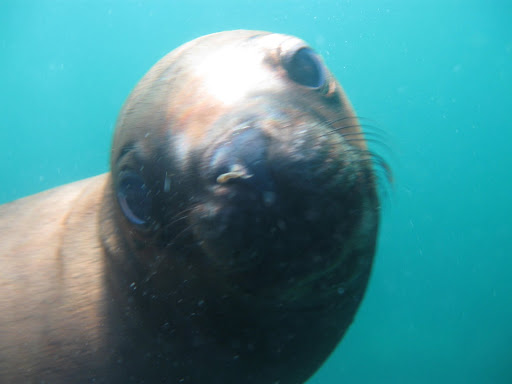 After a few minutes, we had a three or four curious sea lions staring at us in the water. They were absolutely adorable, swimming circles around us, while occasionally poking their heads above the water. 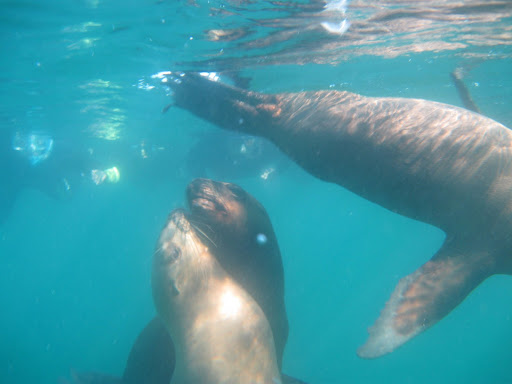 We could have stayed in there forever, but unfortunately the chilly temperatures meant we had to limit our exposure. Since I had booked a wreck dive with Lobo Larsen immediately following the sea lion snorkeling, this was particularly important. 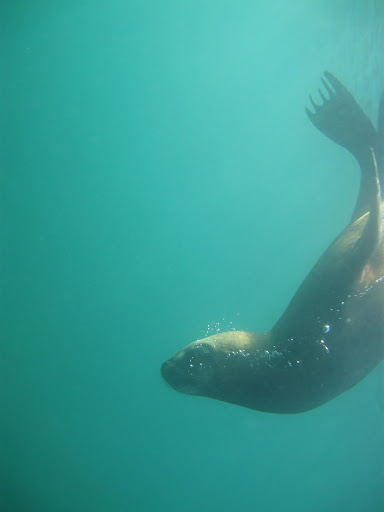 I was a little concerned about the dive as it was my first time diving after being certified in the Bay Islands of Honduras. There, of course, the water is warm and crystal clear, with colorful tropical fish and coral reefs. Here, it is a different story. Visibility is fairly low and the scenery is a lot less interesting! That said, I still enjoyed the dive, which brought us around the entire wreck site – we were even able to swim through part of the inside!

We had an amazing time exploring the wildlife around Puerto Madryn, and would recommend it without hesitation for anyone visiting Patagonia. While it was fantastic, we would still love to come back some other time to see the whales!

3 thoughts on “Snorkeling with Sea Lions and Walking with Penguins – Puerto Madryn, Argentina”