After our trip to the Amazon, we hopped a bus to the popular tourist town of Huacachina. This oasis is quite unique – huge sand dunes for miles surround a small lagoon. I had never seen anything like it before in my life. Since we checked into our hostel at night, we weren’t aware of our fantastic view until the morning light.

This oasis is mainly centered around the tourism that it provides. Our first activity in town was a dune buggy tour through the huge sand dunes. This is probably the most popular thing to do in Huacachina. 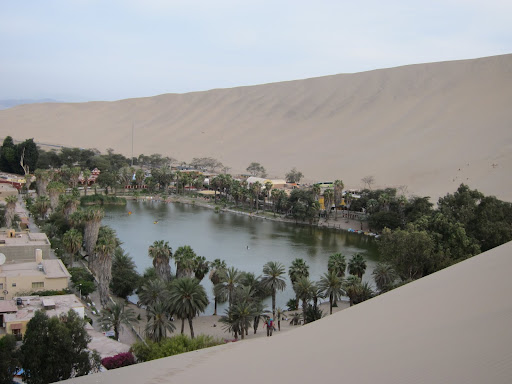 We climbed into a dune buggy and strapped ourselves in along with four other girls. I was quite scared as I’d never been on sand dunes before. Our driver Antonio has been doing this for over 13 years, so I tried to find some comfort in that. We drove through town and started our ascent into the dunes. The views were spectacular. 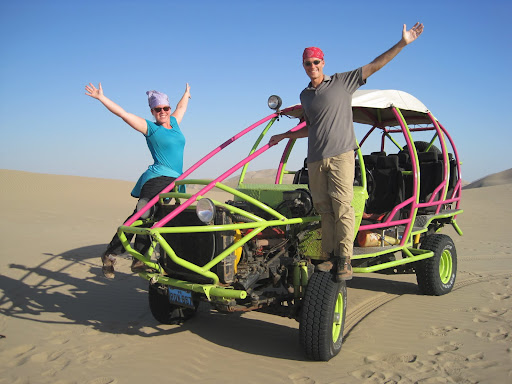 Being a girl from New York, this was all new to me. It started off slow and scenic, but quickly grew fast and scary. Climbing huge sand dunes at angles and speeds which forced me to hold on tight and close my eyes. We were all screaming, including Erik, the only guy in our group. Although everyone else seemed to be having a grand time, I just prayed for us not to flip over and hoped it would be over quickly. Once we finally stopped and jumped out, the view was just breathtaking. Crystal blue skies and nothing but sand dunes as far as the eye could see. 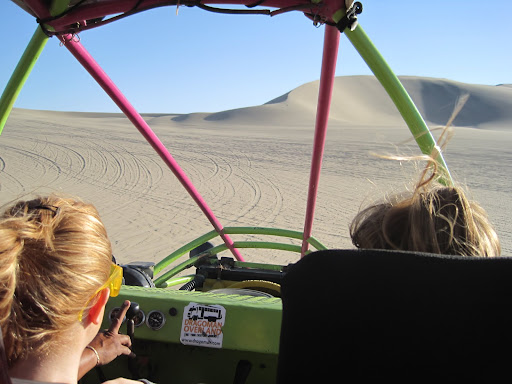 Next, it was time for some sand-boarding. We each grabbed a board and Antonio showed us how to go down while standing up strapped to the boards. Most people fell, but Erik did pretty well until falling and landing on his behind at the bottom. Not bad for the first ride down. 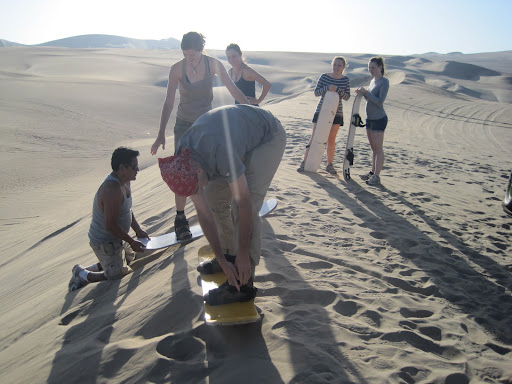 I opted for the seated position, like we used when volcano-boarding down Cerro Negro in Nicaragua. This was really fun and I thought a bit less dangerous than standing. Antonio waxed the bottom of our boards to decrease friction and increase speed. We went down several large dunes, and I finally tried and perfected the head-first position, which was really fun! A lot faster, easier to control, and surprisingly very little sand in my face. A few of the others in the group tried it too, and preferred it, and Erik even gave it a try.

It was so nice not to have to walk back up the dunes. They took us to dunes that are about three dunes high in succession, so after going down one, we’d be at the top of the next one. There was one huge sand dune toward the end that must have been over 400 feet high! Fun times! We were sad when Antonio told us it was the last one. Because we chose the 4pm tour, we saw an amazing sunset over the dunes. 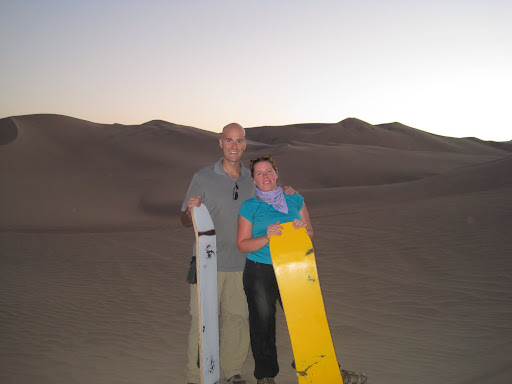 Then, Antonio really took us for a ride. I closed my eyes, but the others screamed with excitement as he zoomed us down a steep dune and took us nearly vertical! Insane. All in all, we really enjoyed the beautiful sand dunes and the sand-boarding was lots of fun. It was well worth the $13 each we had paid. Quite an adrenaline-rush and definitely a unique experience up there on the dunes.