We awoke the sixth day of our Antarctic Voyage newly engaged to find the normally spectacular Lemaire Channel covered with low-hanging clouds. Our heads were equally cloudy following the late night barbeque and dancing celebration of our engagement the previous day at Neko Harbour and we enjoyed a slow start to another action-packed day. At the briefing, Rinie announced our engagement and several passengers congratulated us on the news.

The captain maneuvered around a number of large icebergs which were scattered around the channel. Unfortunately, the less than ideal weather forced us to change our original plans to land at Port Charcot. Instead, we anchored near Pleneau Island to explore a large Gentoo Penguin colony. As usual, the passengers were split into groups, allowing everyone a chance to explore the island on foot as well as the opportunity to tour the surrounding waters in a zodiac. 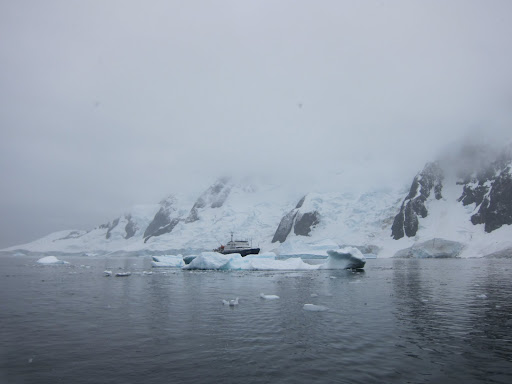 We decided to take the zodiac tour first, climbing into guide Chris’s (the iceberg and glacier expert) boat. The intermittent snow squalls made us really feel like we were in Antarctica! At first, we checked out a few interesting icebergs in the area. Then, Chris took us over to have a look at a leopard seal swimming around some large boulders. 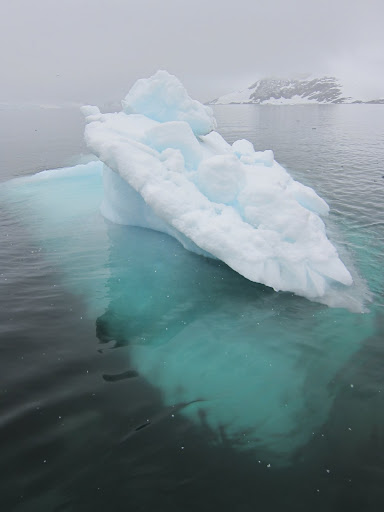 Leopard seals are quite ferocious and often hang around the shore near colonies of penguins for easy access to their next meal. We didn’t know it at the time, but we were about to be very lucky. This leopard seal had just attacked an unfortunate gentoo penguin and was taunting and playing with it. Chris explained to us that leopard seals often snatch a penguin and then play with it a bit before eating its catch. The leopard seal grabbed the penguin in its mouth and tossed it around rather gently at first. We were shocked to see the penguin was still alive even though it was in the leopard seal’s mouth, with its feet popping out just above the water. It was like a game of “cat and mouse,” but in this case, it was leopard seal and gentoo penguin. 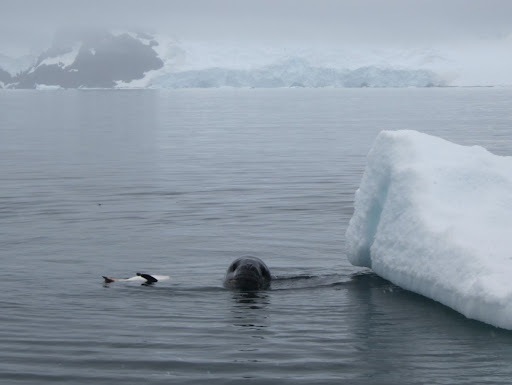 For the next 45 minutes, we watched a genuine slice of Antarctic nature as this leopard seal played with and then ate a gentoo penguin. In characteristic fashion, the seal eventually tossed the penguin about from side to side rather violently in order to separate the meat from the penguin’s skin. Although quite graphic, we were thrilled to have been lucky enough to have had a front seat to such raw nature. It was like a National Geographic special, but better – we were there. 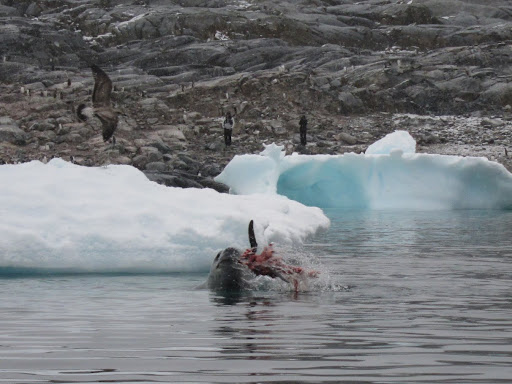 After the incredible leopard seal encounter in the zodiac, we were dropped off on land to spend some more quality time with our friends, the gentoo penguins. On Pleneau Island, we found a good spot right near a small pool of water and among some large flat rocks. With our rented winter gear, I wasn’t afraid to get down and dirty with these cute little creatures. When you get down low near the ground, penguins are not intimidated by your height and often come right up to you to say Hello. Erik had fun videotaping some penguins swimming and splashing about. One penguin seemed a bit manic and crazy flapping its wings and switching from waddling to swimming. 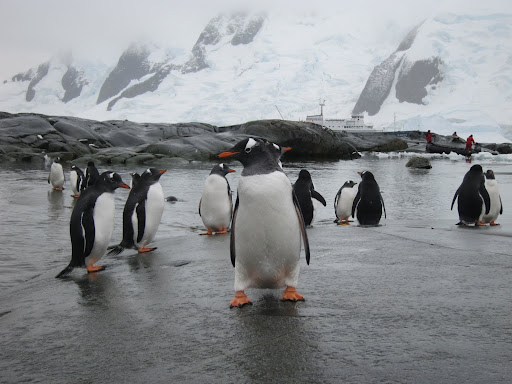 I cannot even really describe to you how incredible it is to sit with a penguin and have a real communicative interaction with them. One penguin took quite a liking to me and curiosity led him very close to me within inches. 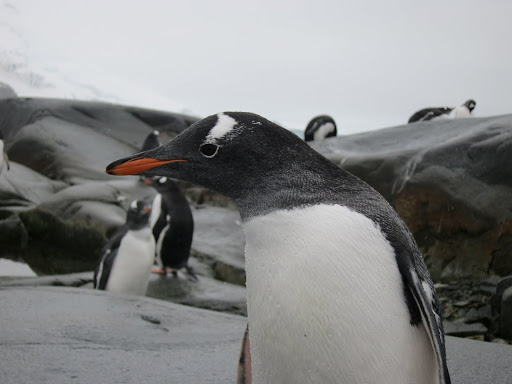 He even nipped at my boots and pants, in a friendly manner of course. Just amazing. We were thrilled to get some very up close and personal photos and videos of these friendly creatures! 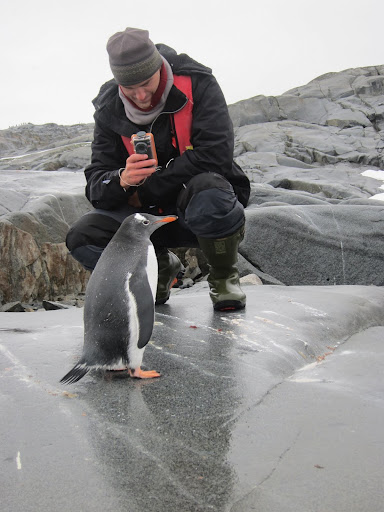 After lunch, we were in for a real treat. We were visiting the Vernadsky Research Station. This previously British research station was sold to the Ukraine in 1996 for the symbolic price of just one pound. It was here at this very research station that the ozone hole was first detected! This station can house up to 25 men who stay their for one year, wintering in the coldest and darkest place on earth. To brighten their days a bit, they even have a pub! This is the Southernmost bar in the World! We enjoyed some shots of some ridiculously strong homemade vodka. 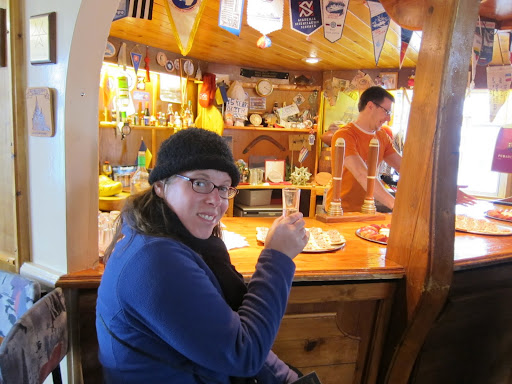 Here, we were also able to send some postcards stamped from Antarctica and get our passports stamped with a neat Antarctic imprint. These scientists are on the base for one year and only get a shipment of food once a year. Lucky for us, the exchange was happening in just a few days, so our postcards might only take a few months to arrive back in the States instead of the usual one year! We shall see! 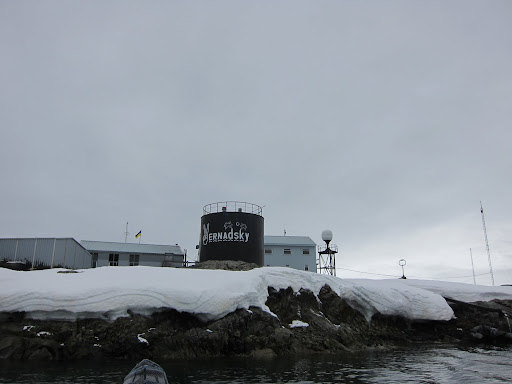 On our zodiac cruise, we saw incredible gigantic icebergs and glaciers cowering over us tiny humans. It was so humbling. We also spotted a lone Adelie penguin among a group of gentoos! These penguins have a striking appearance with their entirely black heads and just a small circle of white around their eyes. We were also lucky to find a huge leopard seal stretched out at the top of an iceberg. We got really close as he yawned at us and he didn’t really seem to mind us coming over to say Hello. I was a bit scared at one point when our zodiac got quite close in a wave swell and we were directly below its mouth. One quick move and the leopard seal could have been in our zodiac! 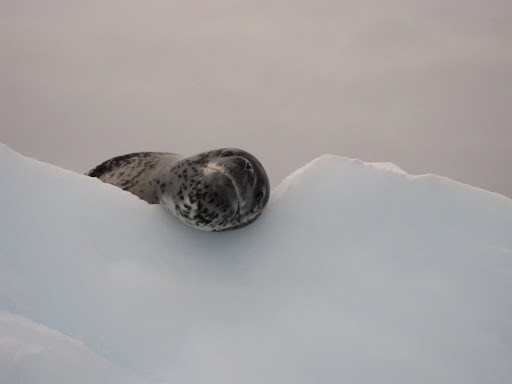 Back on the ship, at dinner, everyone was abuzz and excited as we headed even further south towards the Antarctic Circle! Our 12 day cruise was longer than most, with the plan of heading below the Circle. But, we were unsure of weather and ice conditions that were awaiting us 130 miles south. Hardly anyone gets to go there, so we went to bed hoping for the best…