Whitewater rafting was something we both had never tried, and it was definitely one of our “bucket list” items for this trip. Many places we’ve passed through offer this exhilarating activity, but as first-timers we wanted to go with a respected company that would provide all the usual thrills without the usual lax safety standards found in most Latin American countries. We decided that Costa Rica – which has made a name for itself as an adventure sport destination – would be the perfect place.

Travelers we met told us great things about the Pacuare River and one rafting operator in particular called Exploradores, which specializes in trips down this river and even offers free transfers to and from many popular destinations within Costa Rica as well as an optional additional tour to the Tortuguero National Park. After much deliberation, we contacted Exploradores and booked a day of rafting the Pacuare with an additional two-day tour to Tortuguero. At $575 US for both of us, it was definitely going to be a budget-buster, but with all meals, lodging, and transportation included, along with what would surely be lifelong memories, we concluded it would be worth it. And it was. 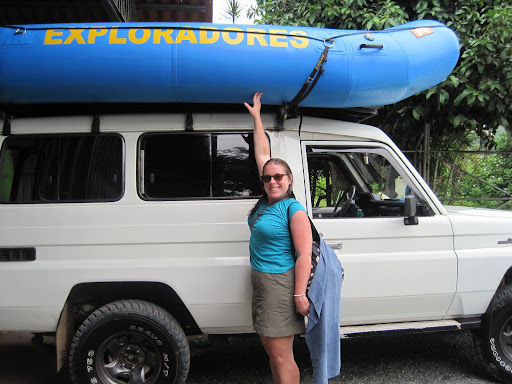 The Pacuare River has been rated one of the top 10 river journeys by National Geographic and has a few different sections available for rafting. We would be rafting the lower section, which runs some 23 miles over a 1,200 foot vertical drop, passing lush jungles, canyons, and waterfalls.

After an early morning pick up in La Fortuna, we arrived at the Exploradores lodge on the Pacuare river, where we enjoyed a large buffet breakfast and were split into groups of six to fit in each raft. The group was quite large that day, with approximately 10 rafts, two support kayakers, and one support boat. 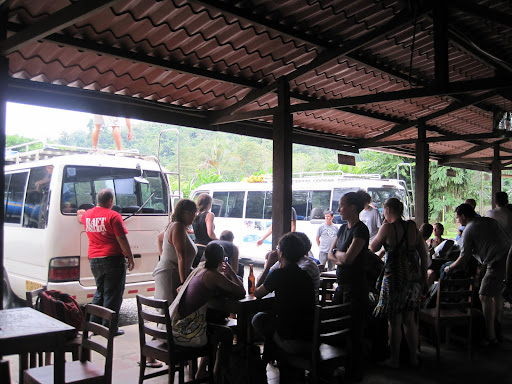 We grabbed life savers, paddles, and helmets, and ran over safety procedures and verbal commands with our guide, Fernando. Tensions were running high as he explained some of the easy ways we could flip the raft or injure ourselves, all while mentioning the river was running exceptionally high that day and that we would be in for the ride of our lives. I think both Heather and I can say we had second thoughts on the whole idea at that moment, but before there was time to object, we were pushing off the banks of the river and quickly floating towards the first set of rapids.

Sensing Heather’s apprehension, Fernando decided to use her has an example and pushed her into the river, demonstrating how we could save an overboard rafter. Needless to say, she wasn’t thrilled. Fernando, meanwhile, laughed like a madman.

It was going to be an interesting day.

Soon, we were flying down the first rapids – a normally easy Class II, that with the high level of the river made them more like a Class III, that instantly tightened up the group and made us realize we would need to paddle hard and follow directions. 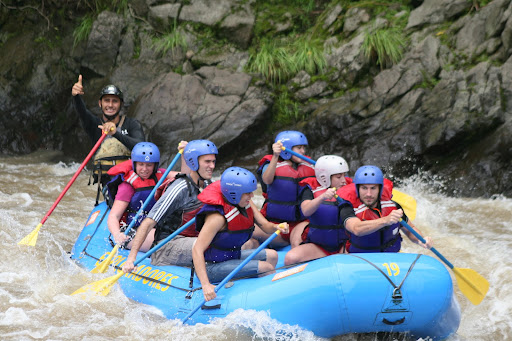 With little time to rest, we were shortly right up in it, with more difficult Class III and Class IV rapids. After tackling each rapid, we would emerge from the wall of water, look around to make sure everyone was still in the raft, and raise our paddles in victory, shouting “Pura Vida” (Costa Ricans’ mantra). 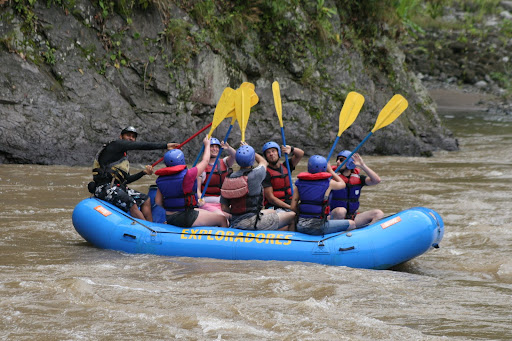 After an hour on the river, the rafts all pulled over to assist one of the support kayakers that had gotten trapped in one of the hairier stretches and dislocated his shoulder. We cringed as one of the guides popped his shoulder back into his socket – the kayaker was screaming and given a piece of foam to bite on while this was done. Fernando told us the kayaker was one of the most experienced guides in the company and had been working there for over eight years. He was loaded into the support boat to be ferried down to the pick-up point for medical assistance. We all hoped that would be the last of the injuries for the day. 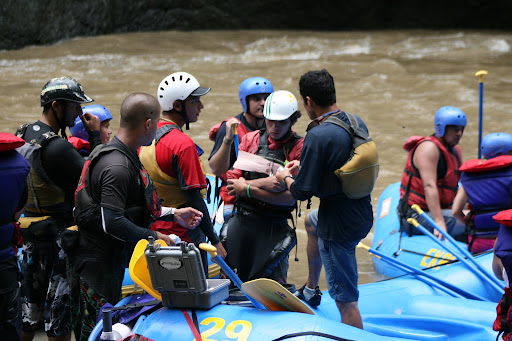 After a couple grueling hours of rafting, we pulled over for lunch. The guides whipped up an incredibly tasty meal, right there on the side of the river in the middle of nowhere. We swapped stories with rafters from some of the other boats and prepared for the final stretch.

We climbed back into the raft, and set out for more white-knuckle whitewater action. The river saved some of its best parts for last – we were soon hitting extremely rough Class IVs. During one of them, the paddler directly in front of me fell out of the raft, and I helped pull him back into the raft as we were still working our way through the rapids. He broke his glasses in two, but luckily was still in one piece. 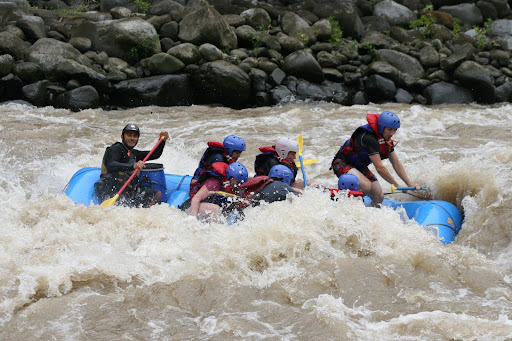 Unfortunately, there would be another injury that day. One woman in another raft was hit in the nose with a paddle handle. We all pulled over to assist and she was wrapped in bandages, but remained in good spirits. Before we set off again, Fernando told us about a guide from a different company that had died a few months ago in the same rapids we had just rescued our paddler from. We felt relieved that nothing worse had happened, though wish he would have saved this story for the end of the day. 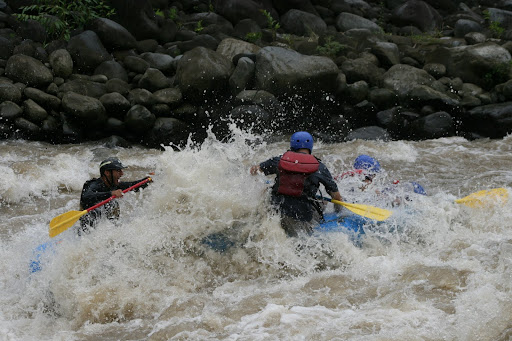 By the time we made it back to the lodge, we were aching and exhausted. Heather thanked Fernando for “keeping us alive”, which he laughed off and accepted with a simple “OK”. I have nothing but admiration for these river guides, who do this every day of the week, maintaining responsibility for six other souls on those tiny, bouncy rafts.

We didn’t know where we would lay our heads that night, so it was a nice surprise to find out that Exploradores arranged for us to stay at a gorgeous farm, at the top of a mountain overlooking the river valley below and one of Costa Rica’s largest volcanoes in the distance. The farm was run by a delightful Belgian couple that had traveled the world by sailboat for years and finally settled in Costa Rica, setting up the farm as a sort of unofficial wildlife reserve, with hundreds of different endemic plants and flowers. 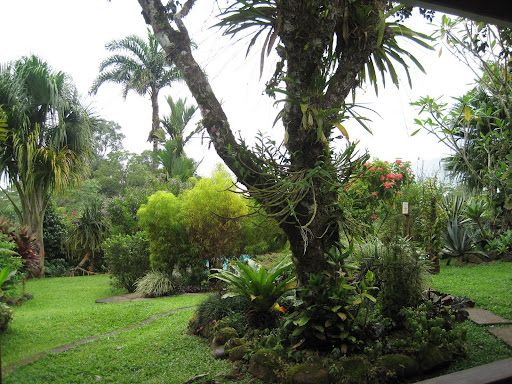 We were the only guests at the farm, and had a private guesthouse entirely to ourselves, where we watched the sun set over the mountain range and enjoyed a few drinks on the patio.

It was the perfect end to a wild day.

You can view more photos from our rafting trip in the gallery.