Crossing the border into our sixth country, Panama, was quite an interesting trip. After a quick bus ride from Cahuita, Costa Rica, we were dropped off at the Panama border in Sixaola. Here, we paid our fees to exit Costa Rica and then we had to walk across an old, rickety railroad bridge that has somehow become a major border crossing. Wood planks, (some were nailed down, some were not), were the only things keeping us from falling into the river below. We really had to watch our step both there and on the crumbling metal walkway on the side of the bridge. We were forced to wait there while a huge tractor trailer drove over the bridge – definitely the most thrilling border crossing thus far. 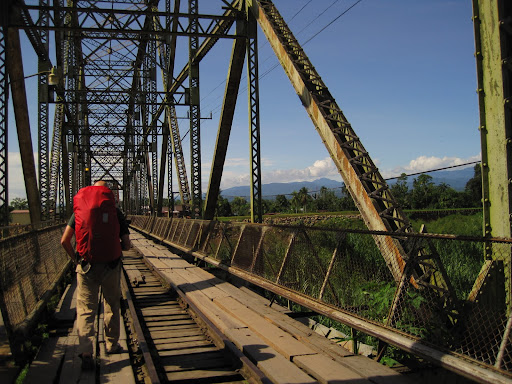 Next we went through immigration on the Panama side, where, as we suspected, they asked for proof of onward travel after Panama. We breathed a sigh of relief that we had a copy of our flight itinerary into Colombia. A shuttle to a ferry was waiting, as this is a common route to the popular islands of Bocas del Toro, a chain of islands full of gorgeous beaches, tons of wildlife and a fun island vibe. Because of this, some people are calling Bocas del Toro the new Galàpagos. 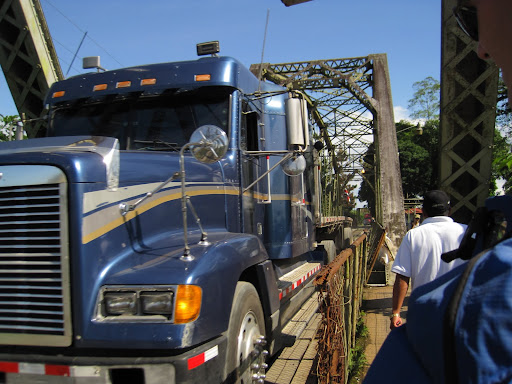 We took a day trip to Isla Bastimentos to catch some sun and waves at Red Frog Beach. The beach was gorgeous, deserted and the huge waves made for some great bodysurfing. 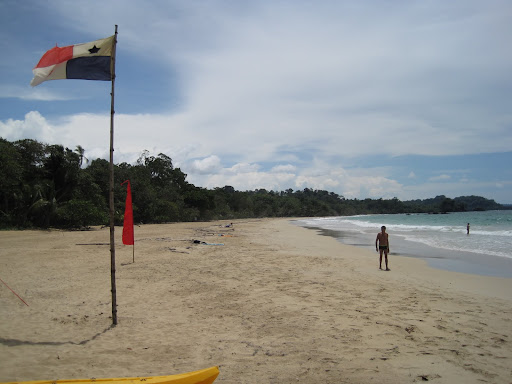 A cute little girl was carrying around a red blue-jean frog (because of its blue legs) in a cup and showed it to us. On the way back to our boat back to the main island, Isla Colon, we came upon an adorable family of sloths – a mother, father and a tiny baby sloth. So cute!

Another day while Erik was working, I took a trip to Starfish Beach, where thousands of brilliant starfish could be seen in crystal clear water. 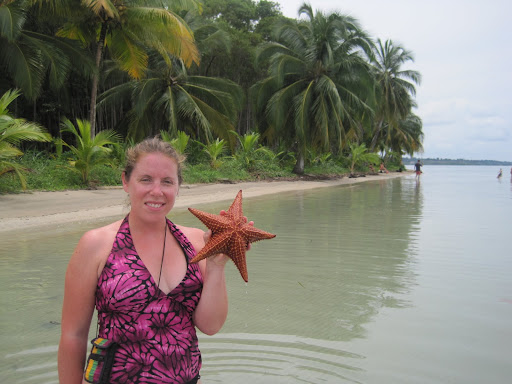 The nightlife in Bocas town is great. There are several nice restaurants, cool trendy bars and also some places to get some cheap grub. We found a popular spot in the center of town called Bambu Beach that served cheap beer and had a cool sand dance floor. One night we lucked out and saw two fire dancers performing there. Another hot spot is Aqua Lounge. This hostel has a great bar with a huge dock which forms a natural swimming pool with the oceanwater below. This place plays thumping loud music till late into the night – I have no idea how any of their hostel guests can sleep. One night we found ourselves there with our British friends who we met in Nicaragua, and the boys had fun jumping off the wooden diving board over the “pool.” Fun times! 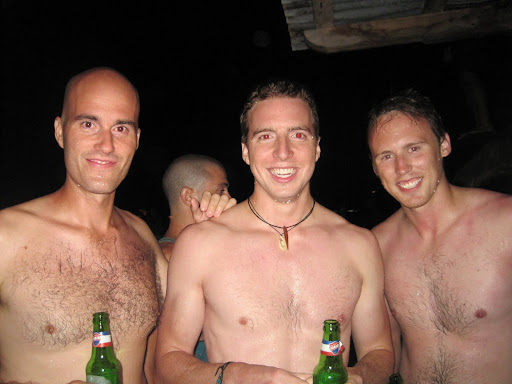 We took a day trip and saw dolphins in the bay, which was incredible, and found the most beautiful beach we have ever seen on Isla Zapatilla (North). This uninhabited island is pure paradise with its crystal blue water and white sand beaches – I don’t think I have ever set foot on such a gorgeous beach. We walked around the entire island. We had a few hours to chill in the beautiful water and enjoyed a few cold beers we had brought along. Does it get any better than this? 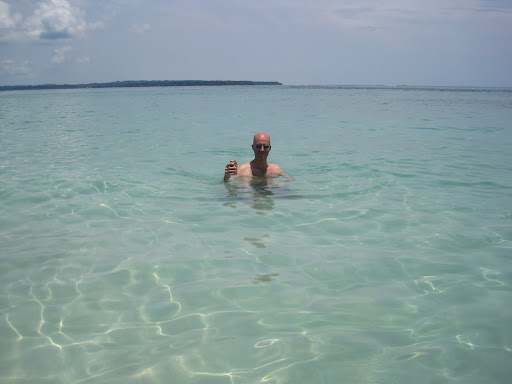 The fun continued in Bocas as the one and only ATM in town broke down and everyone on the island – locals and tourists alike – was unable to withdraw money for two days. We caught wind of a pharmacist in town who would do a cash advance on our credit card. Luckily, we were the first ones in line and got our cash and ran. Dodged a bullet on that one since the nearest bank was a 40 minute ferry ride away and we didn’t even have enough money left to pay for the ride there! 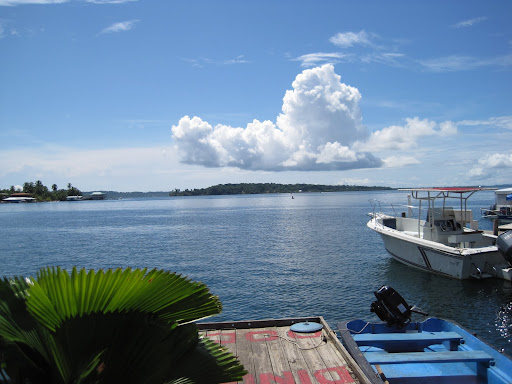 Wandering around one afternoon, we found a fantastic old shrimp boat turned restaurant called Riptide, and had a nice lunch. It was so clever how they had turned this old boat into a waterfront restaurant – it’s a beautiful spot to watch boats pass by and have a cheap meal. 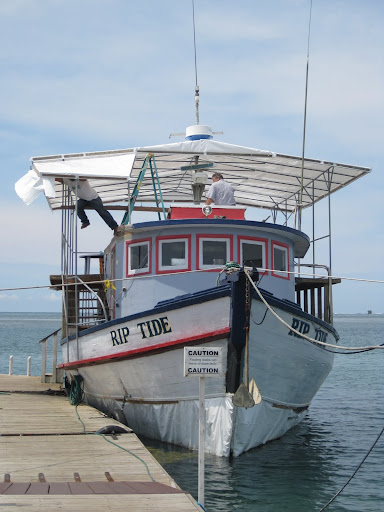 Sadly, we had to leave Bocas at some point. We had begrudgingly weighed all of our options for crossing the thick Darien Gap jungle from Panama into Colombia – A) a four day boat trip which would take us to the gorgeous San Blas Islands, but would cost us $1,000 total and would nearly guarantee us to get seasick while on the open seas for more than 40 hours, or B) a one hour flight which would cost us around $200 total. Sadly, reason prevailed and we said goodbye to the romantic notion of making it all the way from Mexico to Argentina without taking a flight.

Since we had bought tickets for an overnight bus to Panama City, we had to get off the islands and back to the mainland to catch it. As usual, storm clouds rolled in and we wound up on an uncovered boat in a thunderstorm.

We arrived completely soaked and not looking forward to the 12 hour air-conditioned ride ahead. But nonetheless, Bocas remains one of the top five places we’ve been and it’s definitely on our list of places to go back to one day.

You can see all our photos from Bocas del Toro in our photo gallery.

1 thought on “Paradise on the Islands of Bocas del Toro”