We had hoped our month-long travel-break back home would be an opportunity to relax, sit back, and enjoy the company of friends and family. In actuality, though, there were a million little things we needed to do to prepare for the next phase of our travels. For a start, we had to decide where to head next!

Travelling Latin America was relatively easy. Starting in Mexico there was only one direction to go – South! From there, a very obvious trail wove itself through the Central American isthmus, into Colombia and down into Argentina.

Picking a route for the rest of the world would be much harder. We knew we still wanted to see Southern Africa, India & the Himilayas, China, SE Asia, Australia and New Zealand, but it seemed nearly impossible to figure out the best way to accomplish this in an orderly fashion. 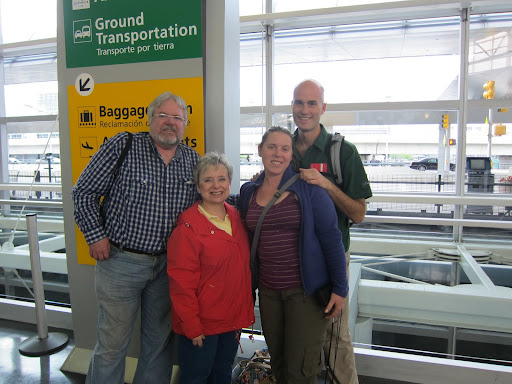 After careful analysis of seasonal weather patterns, airfare, onward routes, visa requirements, and so on, we settled on Bangkok as the stepping stone for this second phase of our trip.

Thailand’s buzzing capital city is a travel hub for backpackers and the natural starting (or ending) place for many backpackers following the “banana pancake” trail through Southeast Asia. Following a very tiring series of flights from NYC via Germany, we touched down two days later seriously jet-lagged, but eager to explore the many sights, and of course, delicious food! 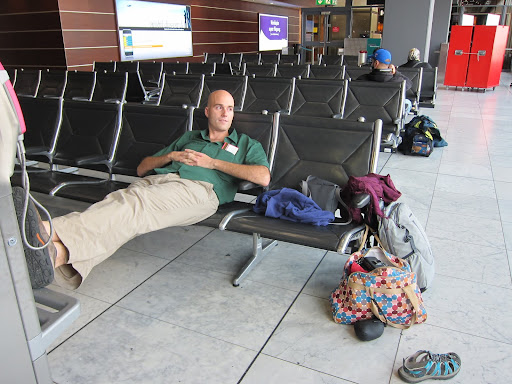 Khao San Road is Bangkok’s infamous “backpacker ghetto,” popularized by Alex Garland’s book (and subsequent Leonardo DiCaprio movie) “The Beach.” Love it or hate it, it’s garnered a well-deserved reputation for cheap digs, cheap food, and even cheaper booze, all leading to a non-stop 24-hour party atmosphere. No doubt, this is no “authentic” Thai experience, but we ignored the warnings and decided to check it out for ourselves. If you’ve seen the opening scene from “The Beach” you’ll get a good sense of what this experience is like, walking through tightly-packed streets lined with merchants of all sorts, selling everything from pad thai, to fake ID cards, to illegal MP3 downloads, to shots of snake’s blood and fried insects. As you maneouver through this maze of madness, agressive touts jockey for your attention. “Hey mister, you want massage?” “Where you go?” “Where you from?” It’s complete chaos, but also a lot of fun. 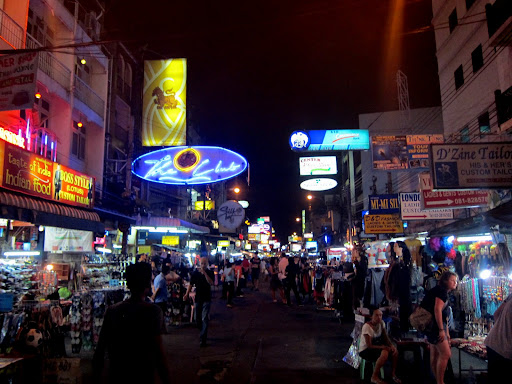 While we enjoyed ourselves on Khao San Road, there was still a lot more of the city to see, and we plunged ourselves into Bangkok head-on, reinvigorated to be on the road again after our month relaxing back home.

Our first stop was the Chatuchak Weekend Market – the largest market in Thailand (possibly the world!), with 10,000 shops set over 30 acres. Every Saturday and Sunday, bargain hunters from every corner of the globe descend on this gigantic outdoor flea market, where you can buy anything – and I mean anything! – from art and antiques, to knock-off designer clothing, to live snakes and roosters. Since we were still jet-lagged from the long trip and 11-hour time zone change, we opted to stroll through the market purely as spectators, making notes on items we may want to purchase in the future. 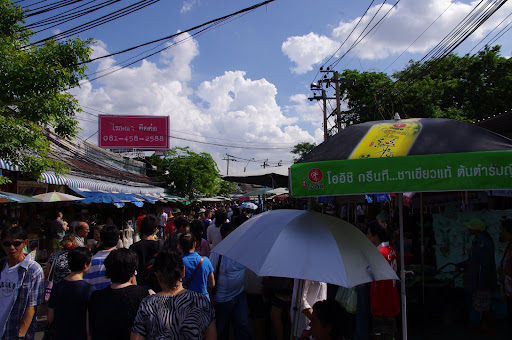 During the week, we also walked through the hectic shopping lanes of Chinatown, where even more cheap trinkets, fake watches, gold jewelry, and other junk can be found. All this non-stop stuff competing for your attention is enough to drive even the most die-hard shopper (read: Heather) a little crazy and after a while we decided to leave all this until a later date, when we pass through Bangkok again in more of a shopping spirit, with a big box to pack and send home! 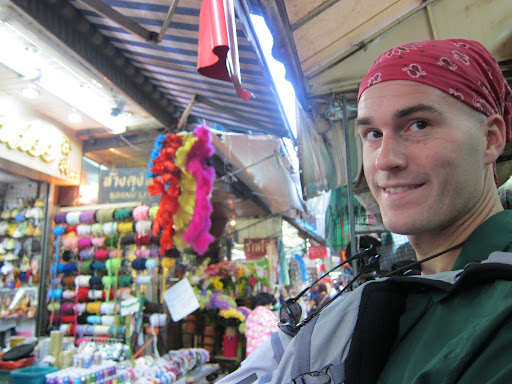 Luckily, Bangkok’s many fine Buddhist temples provide an oasis of peace and tranquility in this otherwise manic city. Following a basic primer on Theravada Buddhism at the National Museum, we visited many of the popular wats (temples), to observe the often outlandish customs, art, monuments, and relics. 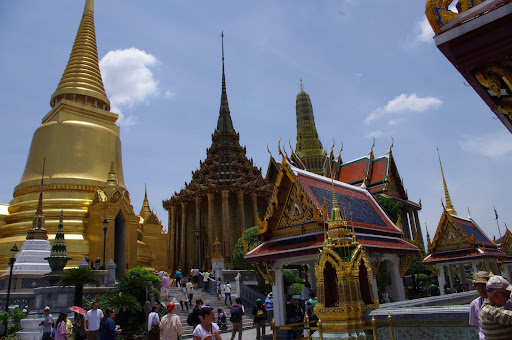 Much of the fun of Bangkok is just getting around. While the BTS mass-transit system provides access via clean, air-conditioned trains to parts of the city, many other areas – including Khao San Road – remain inaccessible. We ended up taking water taxis up and down the mighty Chao Praya River, along with what has to be Bangkok’s most bizarre form of transportation, the Klang Canal Taxi. 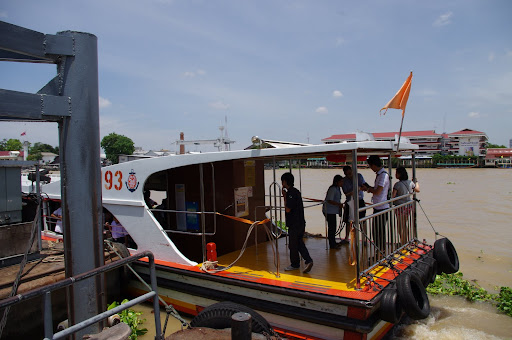 The Klang Taxi proved to be the quickest route between where we were staying and the center of the city, but we still feared each and every ride. Riding the canal is an experience not soon to be forgotten. It starts by boarding a long wooden boat on one of the city’s absolutely filthy, polluted canals. Once inside, the motor revs up and passengers raise plastic tarp curtains to keep the toxic, black water from splashing up. 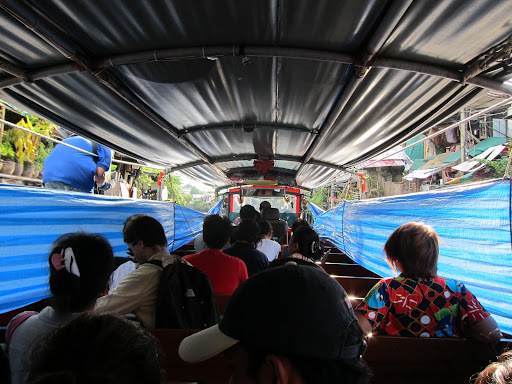 Inevitably, you get hit with a drop or mist here and there of the disgusting water as two boats pass each other in the narrow canal. Meanwhile, conductors wearing helmets and masks cling to the outside of the boat, shimmying around its perimeter while collecting fares from the passengers. We kept our hands over our mouths the entire time and prayed we wouldn’t be splashed!

Finally, you can’t mention anything in Thailand without discussing the food. I’ve been a long-time fan of Thai food, cultivated during my first trip there in 2003, but Heather never shared this spicy love of mine. Well, that all changed after our first couple days in Thailand. Now, she is just as big a fan, always up for a flavorful, coconut-based, spice-infused curry concoction. The food is simply amazing and good enough to turn around even the most fickle eater. 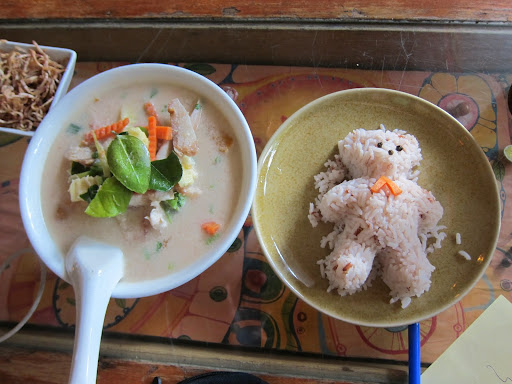 After a week of Bangkok’s hustle and bustle, we were ready to head south. We were island-bound, searching for sun, sand, and scuba. Next stop – Koh Tao!

1 thought on “One Week in Bangkok, and the World’s Your Oyster – Bangkok, Thailand”