When we were preparing to leave Sucre after spending Christmas there, we were shocked to hear from our very sweet host and hostel owner that the Bolivian government had swiftly and unexpectedly removed a gas subsidy, causing the price of gas to double overnight. This would mean higher bus fares, higher taxi fares and most importantly – nationwide strikes.

We had planned to leave the day after Christmas, but buses were no longer running due to transit strikes. Since Bolivia has such terrible roads, transport is difficult and with astronomical gas prices, everything was about to explode. Luckily, we found a bus running to our next destination, Tarija, the day before roadblocks and strikes were set to go up around the country. 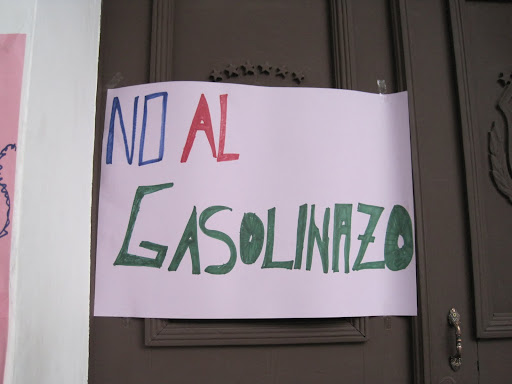 Tarija is Bolivia’s wine region and we thought it would be fun to hit some wineries and ring in the New Year with “vino” in hand.

We checked into a hostel and had a terrible experience with the rude and unpleasant hostel owner, even though the guidebooks indicated it was a “pleasant” place to stay.

Tarija is a nice city, but once we got there, I felt like we had made a mistake in choosing to be there for New Year’s. But, we had gone along with friends’ plans, and we were there whether we liked it or not. 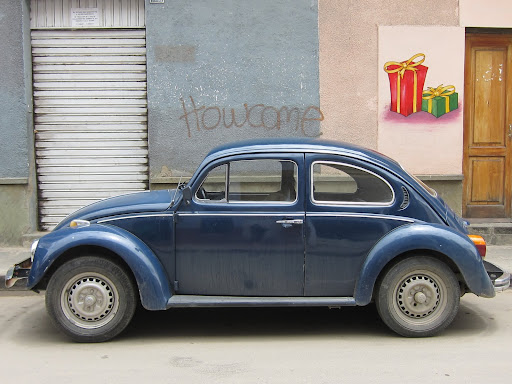 The first day, we were still dealing with the looming strikes and threats of road blockades and mass protests. We finally found a taxi who would agree to a reasonable fare and headed out to distract ourselves from our cares with some good wine. That was a fantasy because the wine in Bolivia is pretty terrible. We went to a couple of bodegas and sampled the wines, but were generally underwhelmed at the quality and taste. We managed to find a nice cheap lunch place to have our almuerzos (set lunch menus). This place was very local and prices reflected that. The others had steak and I had a vegetarian/egg plate which they made special on request. We also got a bottle of one of the local wines, which turned out to be the best we tasted all day. It was shocking cheap at just 13 bolivianos – we paid under $2 US for a nice bottle of wine and in a restaurant! Hell, we even got another. 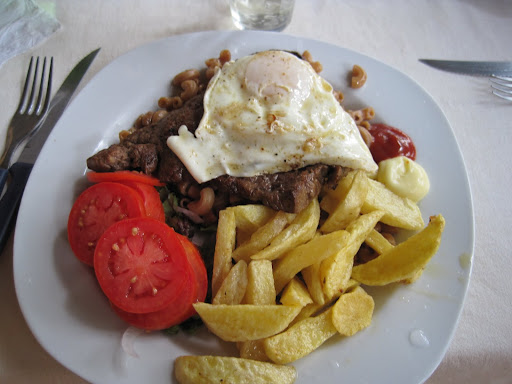 We spent the afternoon tasting more wine and being let down by the bodegas that were shut. One even opened up for us since we kept coming back and took us on a tour of the vineyard. The guide was very sweet and generous with her time, but didn’t offer up any tastings at the end of the tour. We ended the afternoon in a nice tasting shop with some terrible wine. 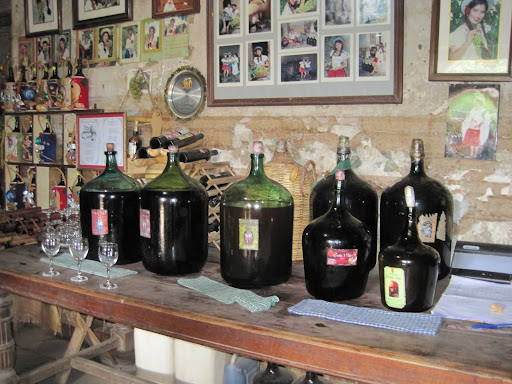 There were some tasty snacks to curb the taste with though. After the tastings, we sat out on the side of the street hoping to flag down a combi (shared taxi-van) back to Tarija. Then, we heard the dreaded news – there was a road block. As we drank yet another bottle as we waited for the combi, we were thrilled to see one finally pass through. As the locals had guessed, the road block had only lasted a few hours, so we were happy to be on our way back to town.

Although Tarija is not a hugely popular city, there was a gigantic and loud protest while we were having breakfast one morning. As we were sitting at an outdoor table at a restaurant along the plaza, we couldn’t help but notice the cacophony of beeping horns. As we walked back to our hostel, we saw many cars lined up in traffic and beeping. Most had signs on their hoods voicing their displeasure with their president’s absurd surge in gas prices. All along, we agreed that the hike was unfair, but we also wished we had already finished traveling through Bolivia. What was once one of the cheapest countries in South America was seemingly becoming a pricy one, as we still had a huge expense – the Salt Flats tour – to shell out. 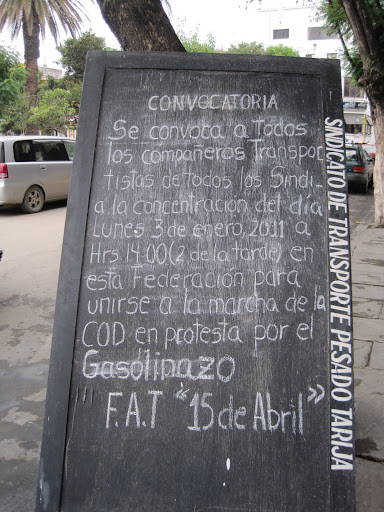 New Year’s Eve was ok. We went to a nice steakhouse, but they had no chicken or fish (which we surmised could be due to the hikes and strikes since Tarija is such a pain to get to), so I barely got to eat dinner. They were nice enough to let me have the salad bar & sides for free, but I knew we would have a night of drinking ahead of us and thought this was a bad tactic.

We had debated about what to do for New Year’s Eve and the guys finally went and got us tickets to a big party in town. We got all dolled up for the occasion not knowing what to expect. It was a good thing we did. It turned out that the party was more like a high school prom. Girls in bad dresses and clicky groups scattered around the room. But, there was a live band and the booze was all-you-can-drink and they had vodka, which Erik and I were happy about. It was fun and entertaining, but I was still wishing we could somehow beam ourselves home to be with our families to watch the ball drop. 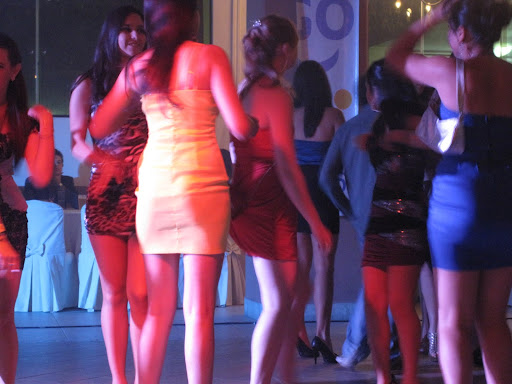 In Bolivia, there was no countdown or balldrop. But they did give us fancy sparkly ties and ‘2011’ eyeglasses just before the strike of midnight. 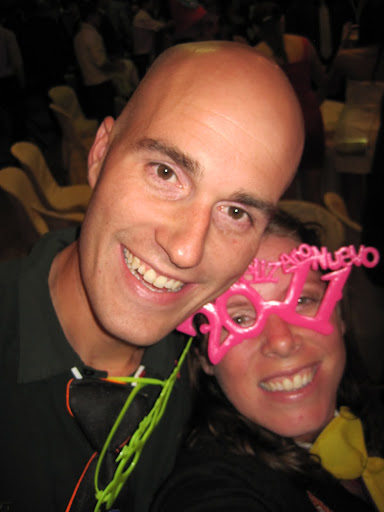 All in all, it was a fun, and slightly messy night and before morning, 50% of us had gotten ill from the night’s festivities. I’m proud to say that I – the girl who didn’t eat dinner – was not one of them!