After a few days spent recuperating from Heather’s wisdom tooth extraction at the Omni Resort in Cancun (thanks, Hotwire.com!), it was time to move on.  We had spent nearly a week in Cancun and – believe it or not – we were ready for a change in scenery.

Starting a round-the-world trip on vacation resorts in Cancun was a wonderful way to shift gears and relax before entering the not-quite-as-glamorous backpacking world of budget hostels, cheap buses, and PB&J sandwiches.  Since we had such a soft start, we decided to continue easing ourselves into our new lifestyle by heading South to the resort destination of Playa del Carmen.

While still touristy and expensive, Playa was just the type of experience we were looking for.  Instead of luxury high-rise beachfront resorts, Playa is more like an actual town, with a bustling main-drag pedestrian street running parallel to the beach and millions of little outdoor restaurants, bars, and clubs.

Speaking of clubs, our quaint little budget hotel – quiet and peaceful during the daylight hours – was practically inside the neighboring club.  Luckily, they played good music (Erik approved), but the walls were vibrating every night to 5am and we found it nearly impossible to sleep. 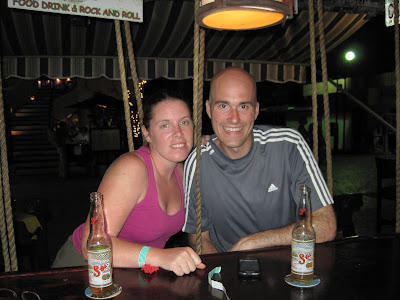 Still, we had a fantastic time in Playa, using it as a base to explore the surrounding area.

First, we jumped in a colectivo and took a day trip south to the Mayan ruins of Tulum – built on a majestic bluff overlooking the beautiful blue Caribbean Sea.  It was a fascinating introduction to the Mayans – which are to become a recurring theme in our Yucatan travels – and fascinating to think about the now extinct city that used to stand in that amazing place.  Since it was early in the day, we also took the opportunity to visit the Xcaret! theme park, where we were able to swim in a refreshing underground river and watch an excellent show about the culture and history of Mexico.

While in Playa, we also took a stomach-turning ferry ride to the island of Cozumel, where we rented a moped and explored the entire island.  We stopped before lunch to take in some snorkeling right off the beach, which both Heather and I thought was the best we had ever seen.  All sorts of colorful fish surrounded us in every direction in crystal-clear waters.  Breathtaking! 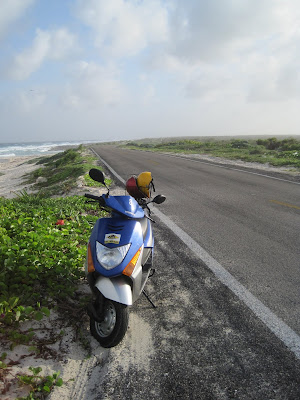 Our scooter on Cozumel's barren eastern side, Cozumel Island, Mexico30-Apr-2010 17:56
View at Picasa

With more than a week after Heather’s tooth extraction, it was time to head back to Cancun to have the stitches removed and the post-op checkup.  Luckily, everything looked perfect.  It was time to jump on a bus and head West to the sleepy capital city of the Yucatan – Merida.

One of the wall's entrances…Erik banged his shoulder while filming a video here.29-Apr-2010 13:42
View at Picasa

3 thoughts on “Life on the Playa”