We left Whakatane energized following an amazing experience at White Island, but sad that our time in New Zealand was winding down. With only a few days left before our scheduled flight back to Australia, and the Christmas holiday approaching, we only had enough time to visit two final destinations on the North Island. We decided on visiting the Coromandel Peninsula for a couple days, before heading to Paihia on the far north coast for Christmas.

On the map and according to our GPS, the distance between Whakatane and Coromandel Town didn’t look to bad, so we took our time driving there and checking out the Bay of Plenty along the way. We stopped at Tauranga, where the container ship MV Rena had recently run aground on the Astrolabe Reef. Way off on the horizon it was possible to see the support ships working to contain the environmental damage and free the loose containers. 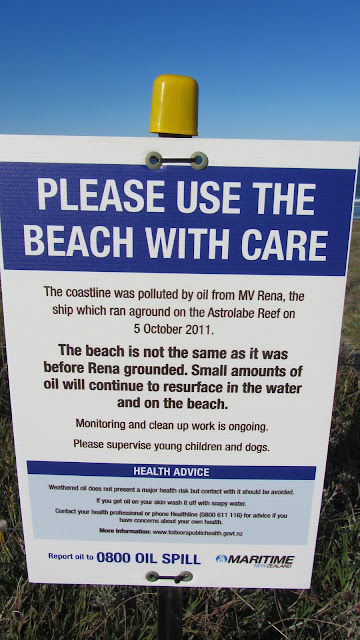 Around this time, we called a holiday park in Coromandel Town, letting them know we would be arriving soon. Upon hearing we were in Tauranga, the park manager told us it would take us at least another 3 hours. This would mean we would be arriving in the dark after closing hours. Luckily, it would still be possible to check in and get situated.

As the time and miles wore on, we realized the woman on the phone was right. The typical New Zealand narrow and twisty roads meant this relatively small distance was going to take a long time to cover. Once we made it to the Coromandel Peninsula we thought we were home free, only to find all the “boaties” hauling their huge boats on trailers around the sharp turns and blind corners. Those guys were crazy! Many times we had to pull over to allow them to pass. When we finally made it to Coromandel Town, we were completely beat, but relieved to have made it in one piece! 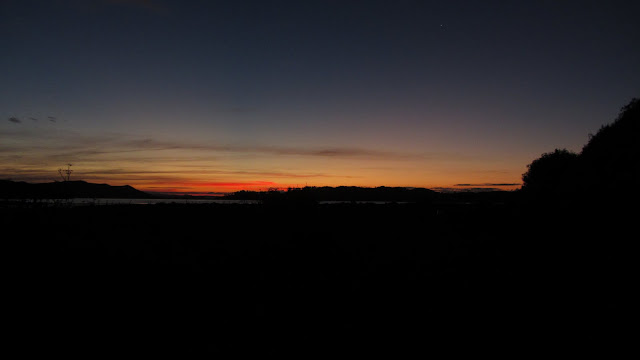 The next day, we explored the town, and dropped in on the bizarre Driving Creek Railway. This narrow-gauge miniature railway was designed by local eccentric artist, Barry Brickell. Originally, Barry built a small section of track to transport clay for his pottery from a nearby pit. Over time, he started adding more and more sections of track, as his time and budget allowed. 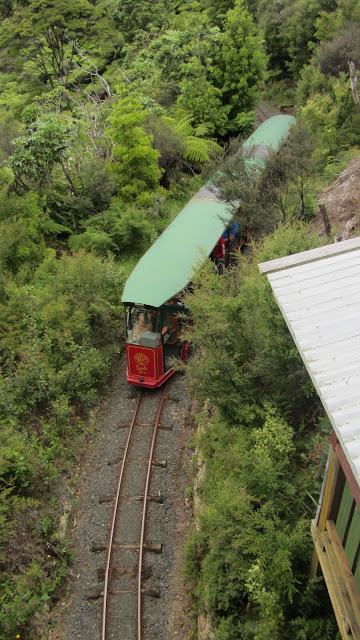 Over the course of 25-years, he continued expanding the railway straight up the side of the mountain on his property, adding tunnels, bridges, viaducts, and a number of reversals. 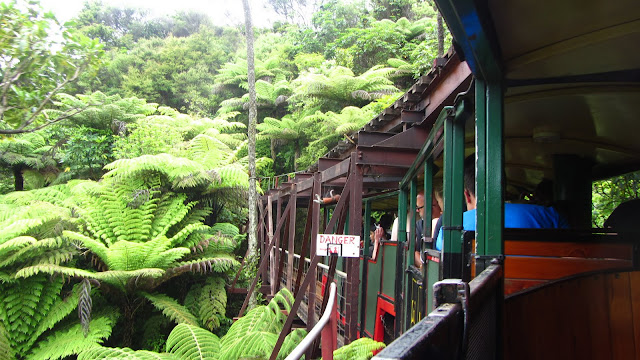 To help fund the railroad’s construction, he started allowing tourists to ride the train, and today it’s become a major tourist attraction on the Coromandel Peninsula. As a child growing up, I used to have a model railroad, so for me this was like the ultimate childhood dream. There was no way we could pass it up! 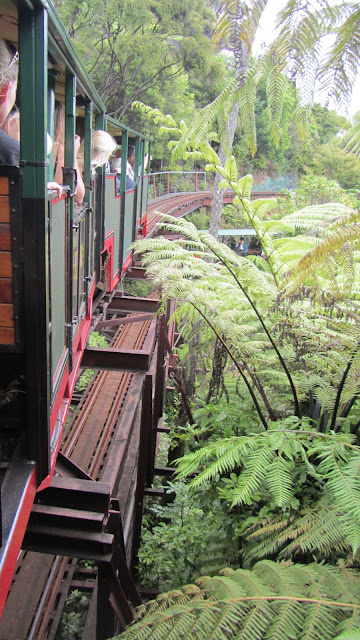 Building a railway like this was no small feat, with steep inclines and challenging mountainside terrain. It is truly an engineering marvel. 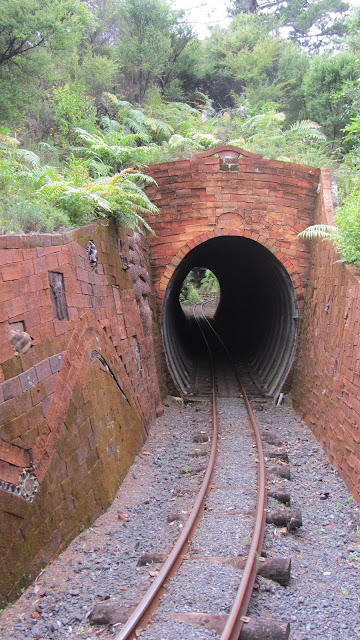 We rode the train all the way up the 165m (540 ft) mountain to the top, where Barry has constructed the “Eyeful Tower”. From here, we enjoyed fantastic views of the surrounding bays and harbors. 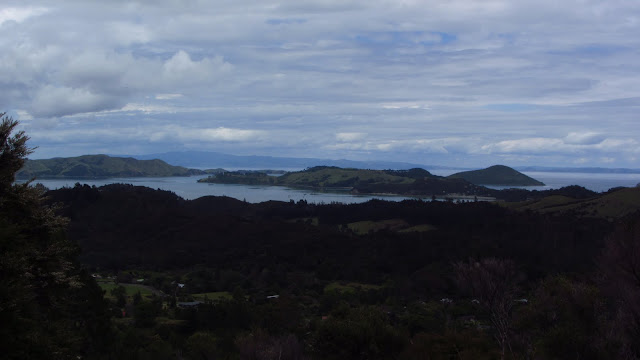 No trip to the Coromandel Peninsula would be complete without a visit to “Hot Water Beach”. At this unique beach, hot water springs can be found by digging into the sand, but only at low tide. Those inclined to dig can enjoy a natural hot tub until the tide comes in and destroys all the holes.

We armed ourselves with a cheap garden trowel and bucket and arrived at Hot Water Beach at low tide. Our dreams of a peaceful and relaxing soak in the hot water evaporated as soon as we had a look at the beachhead. Hundreds of people were already here, staking their claim, and battling each other for the best spots. With all the good real estate already taken, we were left trying to dig closest to the water. It was a battle with the elements as waves kept rolling in and knocking down our sand fortifications. On top of that the water was only lukewarm. We did end up meeting some nice people and sharing a downright-boiling pool towards the end, but it certainly wasn’t the tranquil experience we were hoping for! 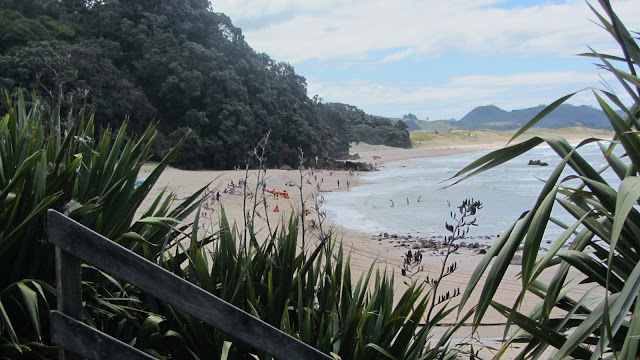 Finally, we visited the remarkable Cathedral Cove. Here, limestone cliffs have been carved out by the pounding surf, leaving behind beautiful rock formations jutting out into the ocean and a perfectly-white sand beach. 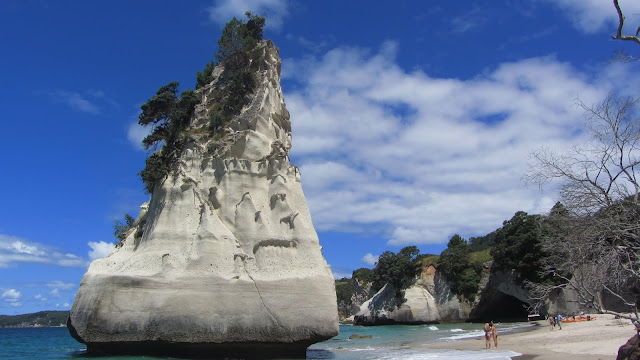 Luckily, the weather was behaving, and we were able to enjoy some more-relaxing beach time here at Cathedral Cove. While the sun was shining and the air was fairly warm, the water was freezing (a theme in New Zealand), so we mainly relaxed on a beach towel and stuck our feet in occasionally. 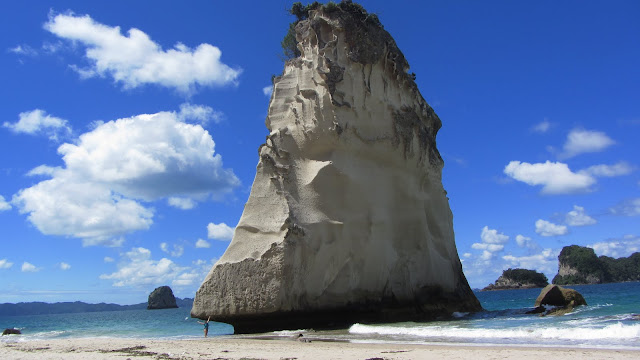 The cove itself is reached via a large rock arch. 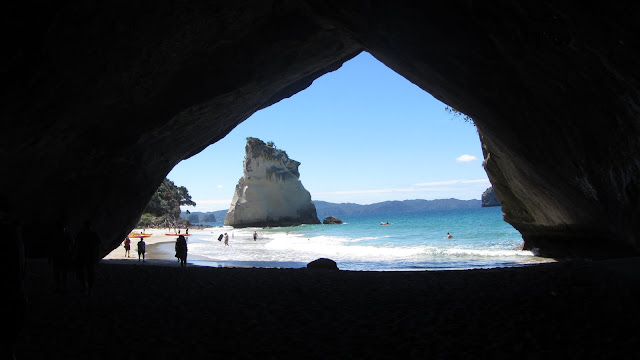 There are also a number of sea caves and other coves which can be walked to. 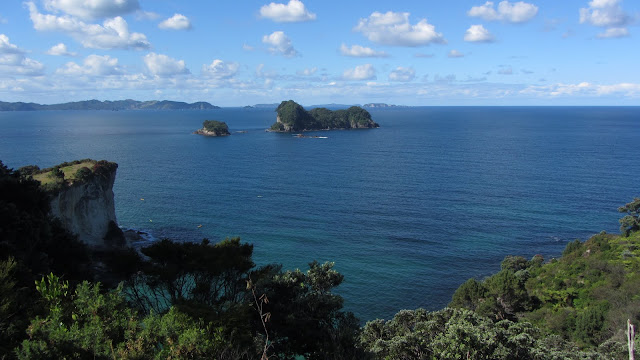 After two nights on the Coromandel we were ready to move on to our final destination in New Zealand. With Christmas approaching, we headed to Paihia to spend the holiday.