Continued from Part I…

After a night of non-stop rain less than halfway through our planned 5-day trek through Torres del Paine National Park, we were debating whether to continue through the unpleasant conditions or turn back towards Puerto Natales. Throughout the morning and early afternoon the rain kept pouring down as we sat in our damp tent, whiling away the time, hoping the weather would improve.

Surprisingly, Heather – who I had reluctantly convinced to set off on this trek to begin with – was the more optimistic of the two of us, insisting that we press on. The rain started tapering off, and eventually the sun even made an appearance! We quickly packed everything up and were on the trail by 2:20pm. 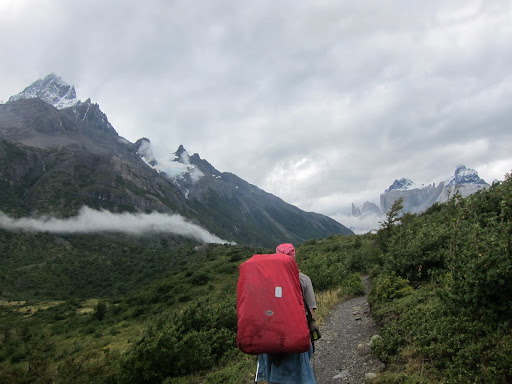 It would be a tough day’s hike, as we had to cover at least 14 muddy kilometers to our next camp site. Realizing we were running against the clock, we tried to keep our speed up.

Around 5pm we made it to Italiano Camp, where we temporarily dropped our packs in order to scramble up the Valle Frances, which features stunning views of the surrounding mountains, glaciers, and waterfalls. 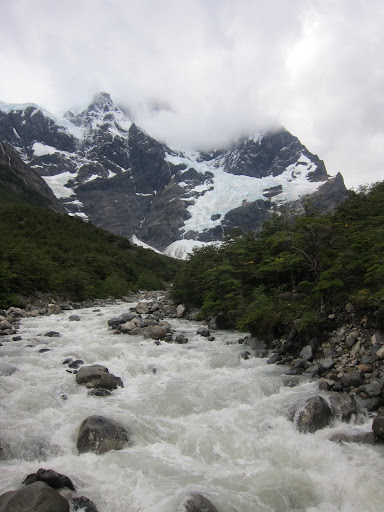 We heard and, in some cases, saw large avalanches as snow fell from higher up in the mountains. The loud, earth-shaking rumble and huge explosions of white ice and snow were impressive. 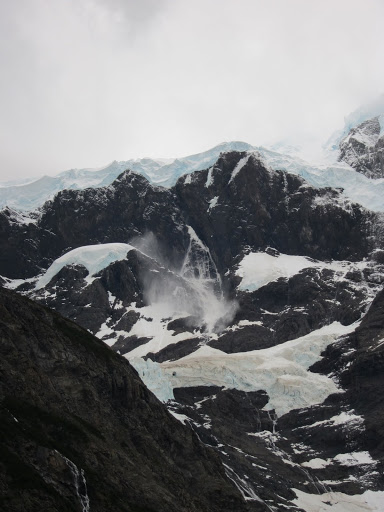 If we had had more time, we would have continued farther up the Valle Frances, but as it was, we knew it would be lucky to make it to the Refugio Cuernos campsite before dark. 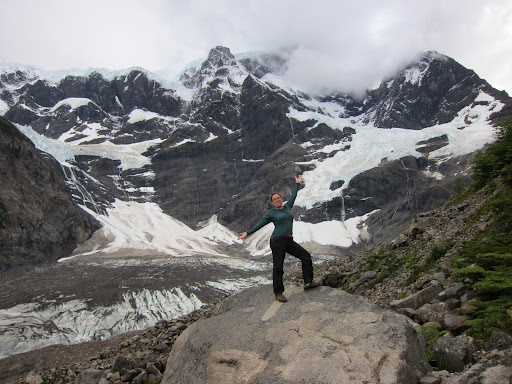 As the sun made it’s way towards the horizon, we picked up the pace, nearly running as the clock struck 7pm, then 8pm. Just as the sun was setting at 9pm, we arrived at camp, feeling very lucky to have made it on such tight timing. It was a good thing, too, as there were many difficult rocks and overflowing streams and rivers to navigate past – something that would have been nearly impossible in the dark. 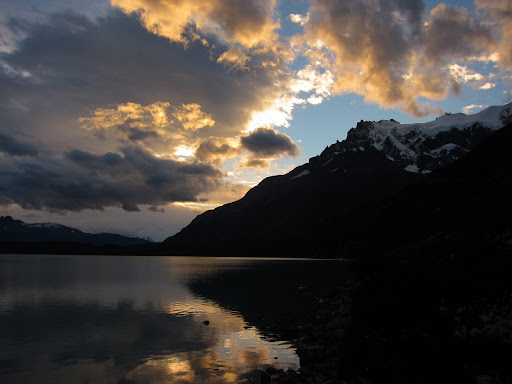 Camp Cuernos was less than ideal – arriving late, the only suitable campsite we could find was at an awkward angle. Apparently, this site is notorious for its mice – I was very upset the next morning to find that one had chewed up my collapsible bowl! I guess we were lucky, though. Other trekkers we talked to told us about mice chewing holes into their tents and crawling into their sleeping bags!

Once again, it rained most of the night, but stopped early the next morning as the sun struggled to fight through the haze. We set off towards the Towers, with the goal of seeing them with the sunrise on the morning of our fifth and final day. 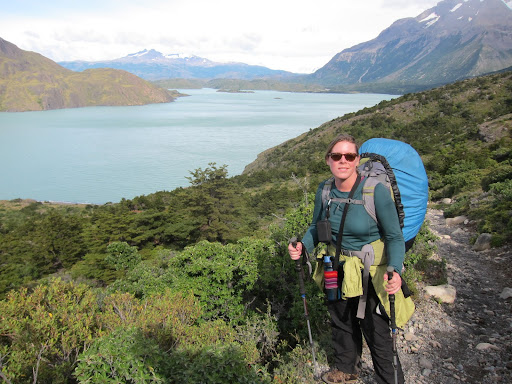 The landscape was not as interesting as the previous few days, though we did pass some gorgeous mountains, lagunas, and small waterfalls. Luckily, we found a shortcut up the valley to our campsite, cutting out at least a couple of difficult hours. 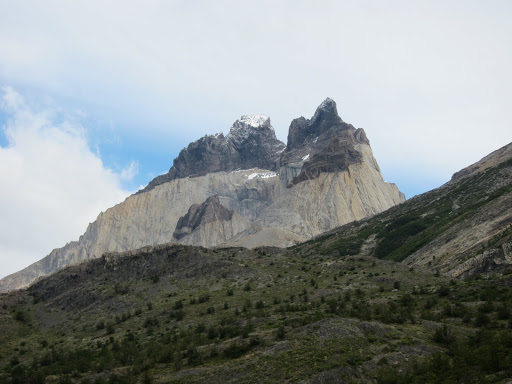 Amazingly, Heather had kept her feet dry up to this point, cautiously stepping around streams, mud, and rivers (in some cases blazing new paths minutes out of the way!). Unfortunately, Day 4 would be the day she finally got her feet wet crossing an overflowing river. I, of course, had wet feet from the start, and had already given up on any effort to keeping them dry. 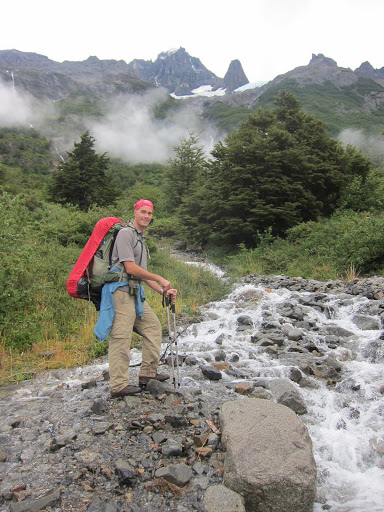 It was March 1st – our 4 year anniversary – so we celebrated by buying an overpriced bottle of wine from one of the refugios, which I hauled up to the upper Torres campsite. On the way, I spotted a large red fox standing in the middle of the trail, staring me down. I motioned back to Heather to stay quiet, and watched as the fox slowly walked past me.

We arrived to camp around 6pm, with plenty of daylight time to spare. Since it was dry, and a bit windy, we aired out our soaked tent, shoes, and clothes and set up next to a bubbling brook, which we used to chill the white wine we had bought. 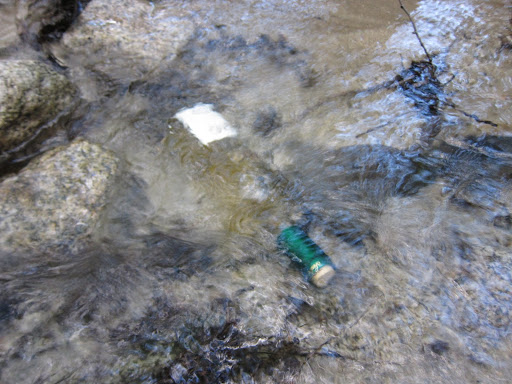 In addition to it being our anniversary, this was also our last night camping, and we were in good spirits. It was a rustic and cold way to celebrate, but certainly one we will never forget!

We called it an early night, in order to wake up around 5am the next day.

After the alarm interrupted our sleep, we peered into the darkness outside to verify it wasn’t raining. Luckily, it hadn’t rained the night before, so we hoped conditions would be good for seeing the towers. We could still see the bright stars in the sky above.

As suggested by Erratic Rock, we packed our sleeping bags, camp stove, and breakfast into day packs in order to better enjoy the sunrise at the freezing cold top.

Once again, we were plagued with the difficulties of only having one headlamp. I wore it most of the way, stopping a lot to shine back a path for Heather. It was tough going with lots of rocks, streams, and roots up steep terrain. The path was a little hard to follow and we got lost in parts.

The sun was slowly making an appearance and we could somewhat make out the towers (covered in clouds), but again, lost the path. 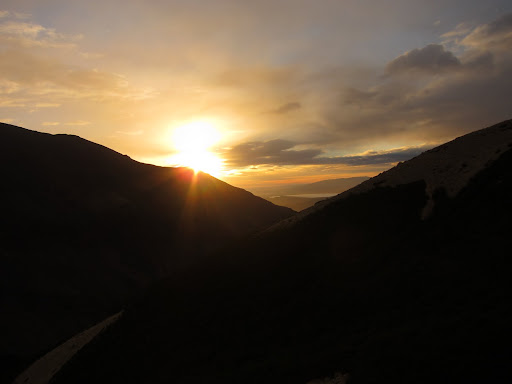 Somewhat stupidly, we decided to follow some Israelis up an extremely steep hill, covered with loose rocks. Rocks were falling down behind us as we scurried up, still ahead of the sunrise. At the top, we hid behind a large boulder, set up the camp stove and sleeping bags. We enjoyed hot coffee tea and oatmeal snuggled in the warm bags, while everyone else was braving it out in the cold! 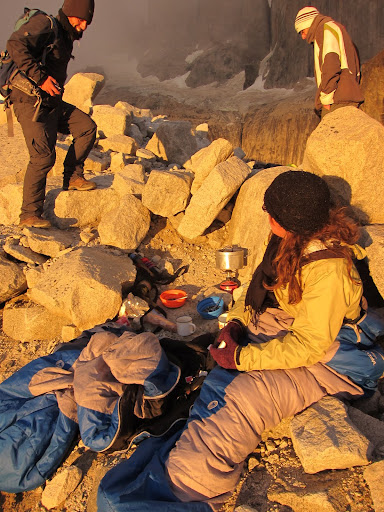 Unfortunately clouds stayed near the towers, and we didn’t find the whole experience quite worth the hype, though it was still a great way to cap off the last day of our trek. 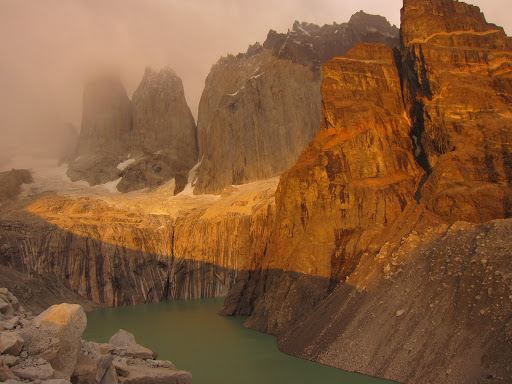 After waiting some time we gave up and slid back down the loose rock. It was probably a little dangerous, but we had fun sliding down! 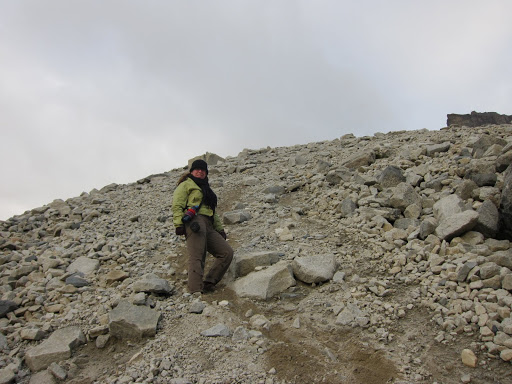 Back at camp we packed up and started the decent to Hosteria Torres. Within three hours we had made it to the bottom, where we relieved our aching feet by changing into flip-flops and caught the bus back to Puerto Natales.

In the end, hiking the “W” at Torres del Paine was a difficult, but extremely rewarding experience. We were proud of ourselves for doing it independently, bringing our own gear, food, and supplies. It was the first time either of us had attempted going it on our own, and it was ultimately more gratifying to have made it on our own schedule and without anyone else’s assistance. Our legs, feet, backs, and shoulders will be aching for a little while longer, but the pictures and memories of this beautiful trek will last a lifetime.

Here’s a video during the sunrise on the top: