We left El Calafate and Argentina to head across the border, towards Puerto Natales and nearby Torres del Paine National Park. This park is supposed to be one of the most beautiful in Southern Patagonia, offering many different hiking opportunities around its stunning mountains, glaciers, waterfalls, lakes, and rivers.

The classic trek through Torres del Paine, is the 4-6 day “W” (named after the shape it traces on a map), with an optional 7+ day “Full Circuit” encompassing the “W” with a backside loop. While comfortable “refugio” lodges are available in the park and guided tours are available, we decided to hike the “W” independently, carrying our own camping gear, food, and other supplies. Most backpackers choose to trek this way, as the other options – while convenient – are extremely expensive. 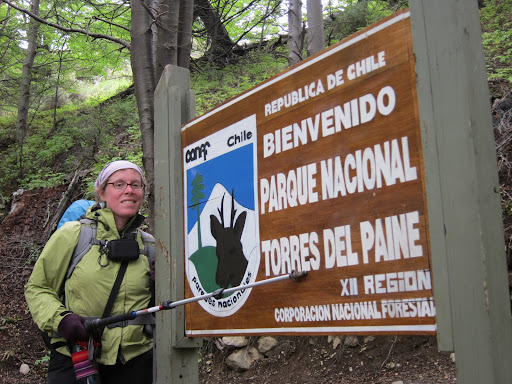 We arrived in Puerto Natales early on a Thursday afternoon, and checked in at the lovely Tin House Hostel. Laura, the owner, suggested we stop by at nearby Erratic Rock for their “3 o’clock talk” briefing, which proved to be very helpful for planning our route and gear.

The next day, I worked while Heather put together supplies. We bought a lot of dry, instant food which would be lightweight and filling, along with some tuna, cold cuts, and cheese for protein. 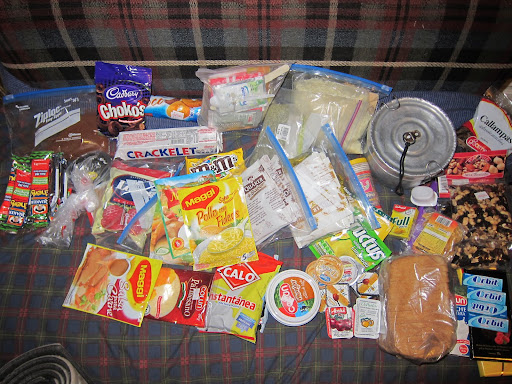 We had been told the unpredictable weather can get nasty in the park, and were very intimidated when a few people staying at the hostel that had left that same day turned around and came right back in the afternoon. Looking at the weather forecast we saw that it was expected to rain for the next 14 days – great! Luckily, Laura convinced us we should ignore the forecasts and give it a shot anyway. Still though, we stayed up late worried about what lay ahead of us.

Saturday morning, we woke up early and were surprised to be greeted by beautiful, clear skies as we boarded the bus to the park. Pulling in to the administration center, we had a direct view to the famous Torres (towers). Realizing this might be the best weather we get for the entire trek, we pulled out our cameras and snapped away. 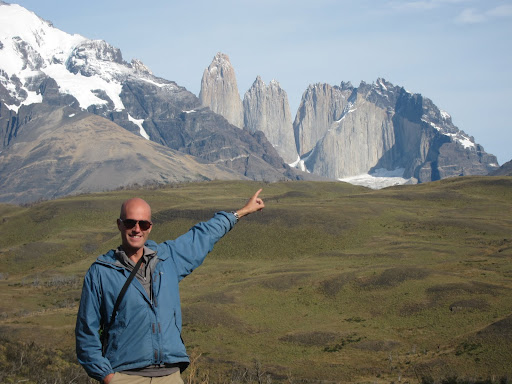 After checking in and paying our entrance fees, we continued on to the catamaran ferry service across Lake Pehoe in order to start the “W” from the West, as recommended by Erratic Rock. The views from the boat were amazing, as we caught a glimpse of the entire trek to come. 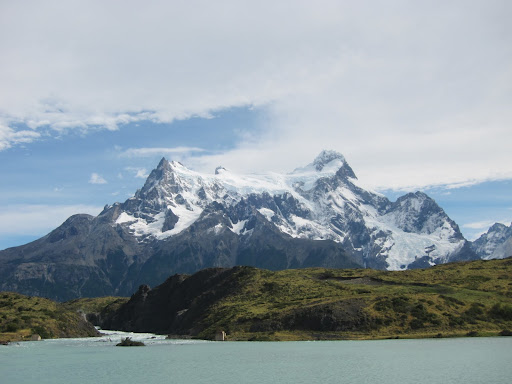 During that first day, we hiked 13km from the Paine Grande Refugio, past brightly-colored lagoons, waterfalls, and a lake scattered with icebergs, to the Glacier Grey. Our camp (Guardas) that first night was next to the glacier, and we enjoyed watching the sunset at the nearby mirador, where it was clear enough to see up into the snowy nearby mountains where the glacier is formed. 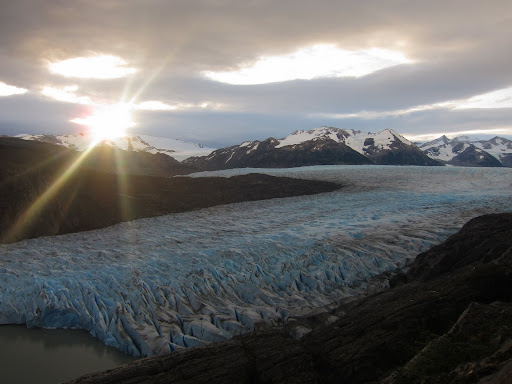 We were lucky to have a relatively warm and dry night, and made ourselves tea, coffee, and porridge the next morning before leaving our gear at the campsite in order to climb up higher next to Glacier Grey. 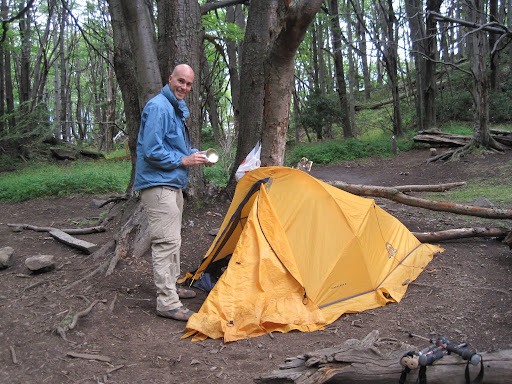 The views were fantastic, though the trail was a bit difficult in parts – including a ladder up the steep side of a rock face above a river. We were glad our packs were not on us! 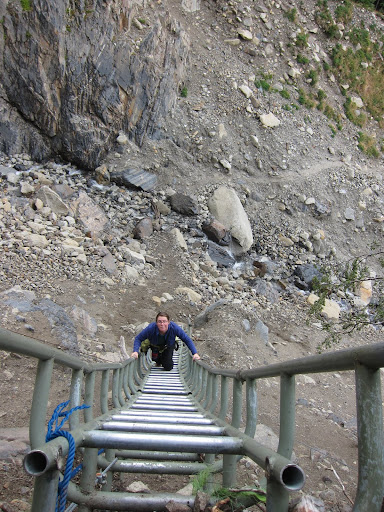 After a quick lunch, we took down our tent and packed up, leaving the campsite just as a light rain began to fall. Since the weather was less than ideal, we tried to move fast and skipped many of the scenic points. We were doubling back to Refugio Paine Grande and had covered this ground the day before, so we already had plenty of decent photos.

Still though, we had to stop when we spotted a condor only a hundred feet away, sitting on a large rock. Silently, we split off the trail and inched closer. The gigantic bird stood there, observing us. And us, observing it.

Deciding to show off, the condor opened it’s massive wings for us – which can span up to 10 feet. 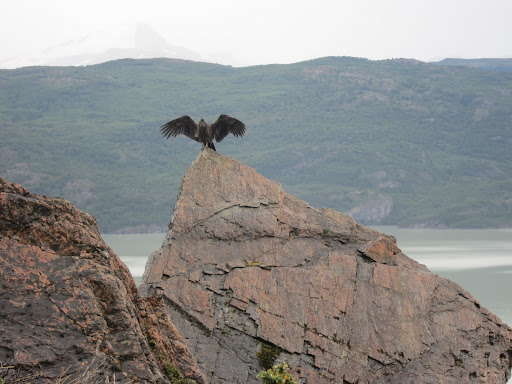 With the day growing later and the rains getting stronger, we steamed on, trying to pick up the pace in order to make it to Paine Grande with enough daylight hours left to set up the tent and prepare dinner. The previous day we had realized I lost my headlamp, and we were forced to share Heather’s between the two of us – making everything twice as difficult. Cooking dinner in the dark turned out to be a comically disastrous exercise, with both of us trying to pass the headlamp back and forth while one sat silently useless in the dark, waiting for the light again. It also didn’t help that it was our first night camping, with rented gear, and everything packed away in an unfamiliar manner. 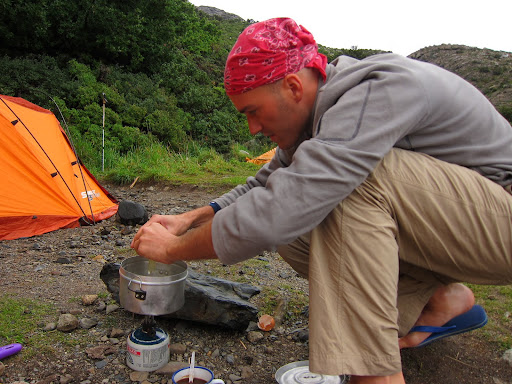 Luckily, we arrived at Paine Grande during a small break in the rain, with enough light to set up camp. Since Paine Grande is a paid “refugio” ($20, just for the pleasure of camping!) instead of a free standard site, we treated ourselves to some of the luxuries offered to campers – including hot showers and cold beer! 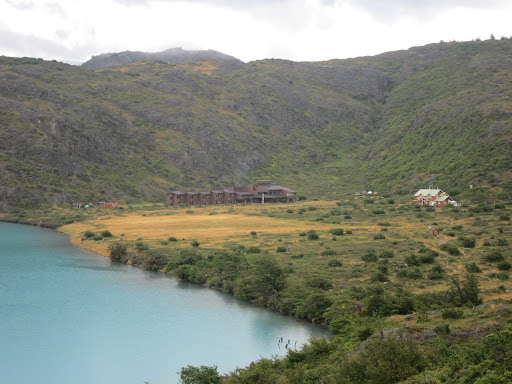 After dinner, the clouds momentarily parted and we were treated to an amazing star-filled sky. Soon, though, it started raining. We hunkered down in the tent, and prayed we wouldn’t get wet.

The next morning, we woke up to find the rain continuing to pour down with no end in sight. We were at a crossroads – we could easily turn back, taking the catamaran back to a bus out of the park. Or, we could press on, through the unpleasant wind, rain, and mud. Before giving up, though, we decided to wait it out, seeing if the weather would change.