After some 2 1/2 days on the unusually calm Drake Passage, we awoke the third day to find icebergs outside our window and snow-covered mountains in sight. Land at last! Screams could be heard from neighboring cabins as the excitement built – this would be our first landing in Antarctica!

As we approached our first landing at Half Moon Island, a thick fog surrounded us, but luckily we were now protected from the open ocean and were enjoying the calm seas and light winds. 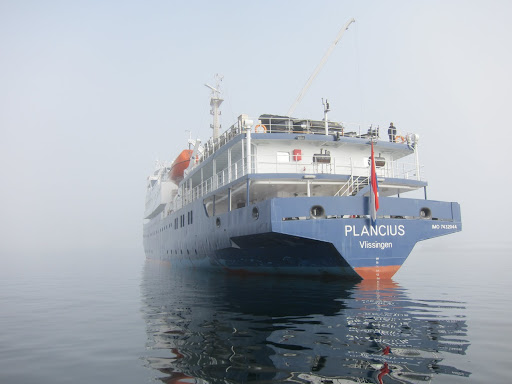 We would be making two landings that day – Half Moon Island in the morning and Deception Island in the afternoon. Both are part of the South Shetland Islands, an archipelago about 75 miles north of the Antarctic Peninsula. These islands were the first parts of the continent discovered – and exploited – by man. Whalers and seal hunters from Europe and America first started visiting this area in the early 1800s. 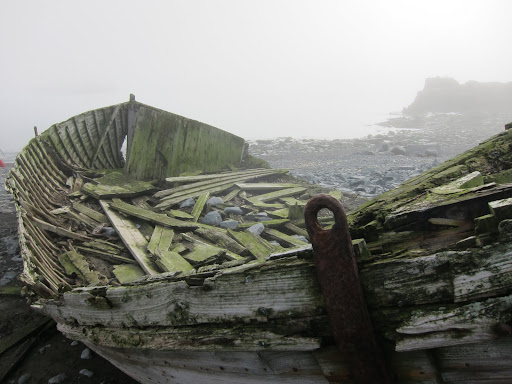 Back in our cabin, we layered up, putting on our thermals, shirts, fleeces, pants, jackets, socks, gloves, neckwarmers, and hats. The ship provided each passenger with rubber boots and a lifejacket, which was needed for each landing. 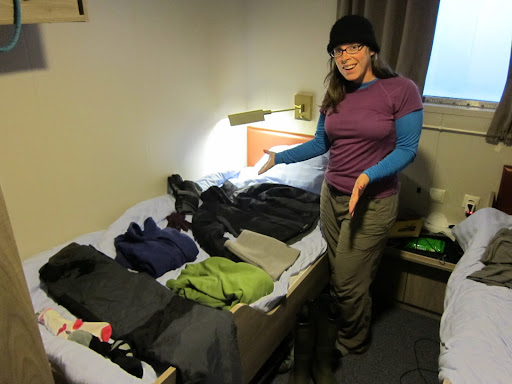 Like we had done in the Galapagos, we then queued up to board a small inflatable Zodiac boat, which would take us to shore. Before boarding, we were asked to flip a card matched to our cabin number, which would keep track of who was on and off the ship. 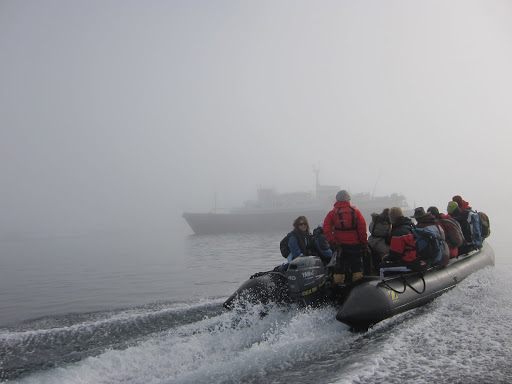 We boarded the first Zodiac in order to join a group which planned on hiking up the scenic Saddle Back Ridge overlook. Approaching the island, we were greeted by a few Gentoo Penguins, zipping around the water near the beach and standing guard as the Zodiac slipped onto the gravely beach. Since Erik was at the front of the boat, he was the first of the group to swing his legs around and land on Antarctic soil! 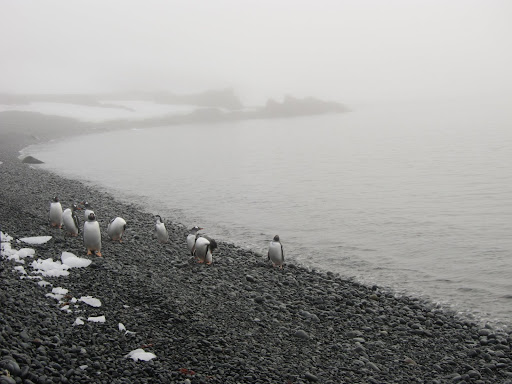 The hikers assembled on the beach and joined guides Jim and Kelvin, which pointed out various whale bones which had washed up onshore. In addition, they directed us around some playful Fur Seals which were inquisitively approaching us, as well as a few Skuas which threatened to dive-bomb us (a defensive behavior they exhibit while protecting their nests). 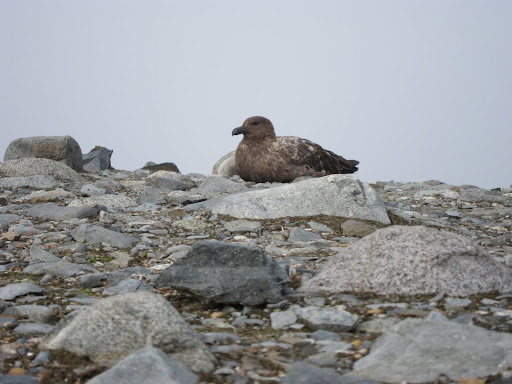 Sadly, the thick fog did not lift, and our guides called off the hike after a short while. We turned back around and made our way towards the other end of the island, passing the Argentinean Camara research base, which was closed for the season. Along the way we came across more friendly Gentoo Penguins and Fur Seals. 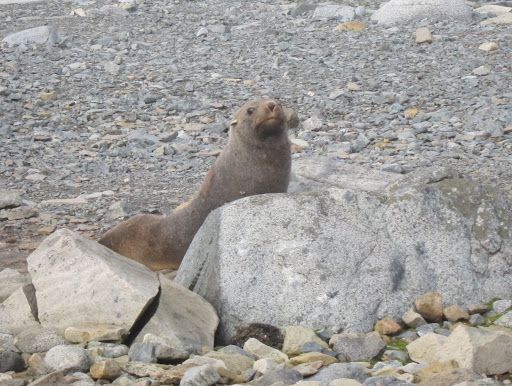 We climbed up a small hill, covered in Penguin poo, to check out the island’s colony of Chinstrap Penguins. Many of them were still in their annual molting phase, waiting for new feathers to grow in. Tufts of fluffy white feather were mixed in with the guano. It was quite a sight – and smell! 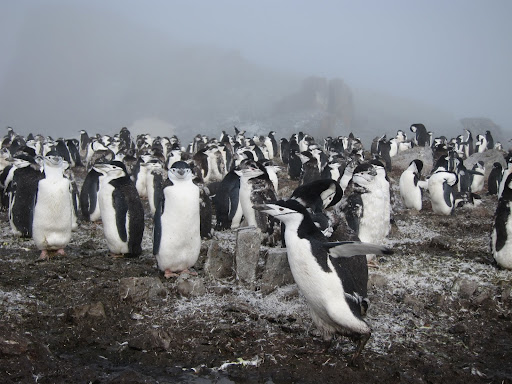 Tucked in with this colony of Chinstraps we spotted a Macaroni Penguin. These colorful Penguins normally only breed on South Georgia Island, nearly 1,000 miles away, but for the past few years a pair of Macaronis has been following these Chinstraps south from their common feeding grounds in the Drake Passage. They’re more than a little lost, but still welcome by their Chinstrap friends. 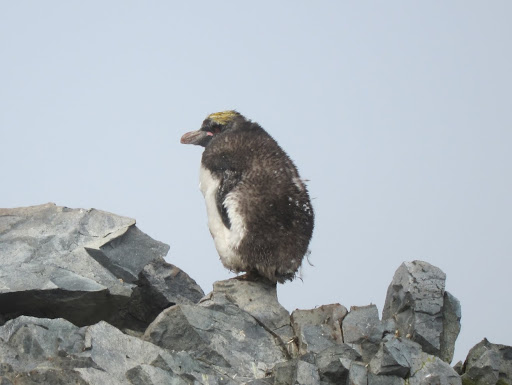 We returned back to the Plancius, to warm up and grab lunch, as the crew weighed anchor and started sailing towards Deception Island.

About 10,000 years ago, a huge explosion from the active volcano on Deception Island caused its cone to collapse and the center to sink, forming a large caldera. A narrow opening to the sea makes it possible for ships to sail right into this still-active volcano, with high walls on all sides making a well-protected natural harbor, called Whaler’s Bay. 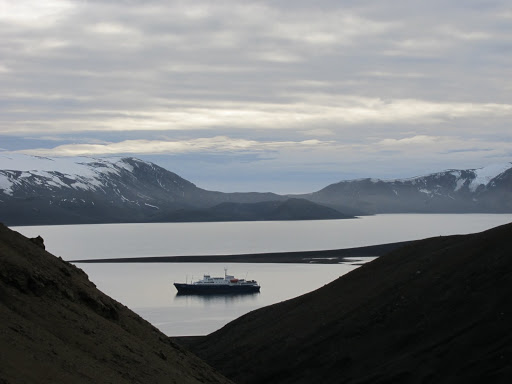 As we approached the tight gap into the caldera, known as Neptune’s Bellows, everyone gathered on the decks to watch the stunning scenery. The captain expertly guided the Plancius through the narrow opening, which is only a few hundred meters wide, and riddled with shallow underwater rocks. 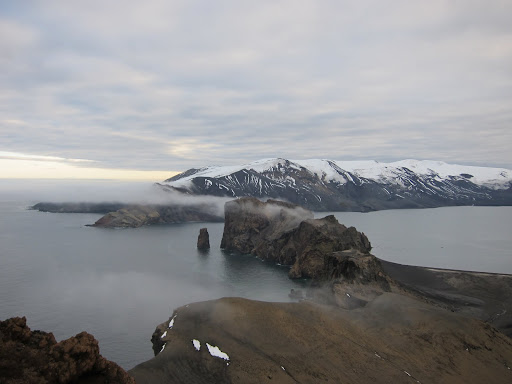 We once again layered up and boarded a Zodiac. On shore, we landed among the rusting ruins of the Hektor Whaling Station, greeted once again by Gentoo Penguins and barking Fur Seals. 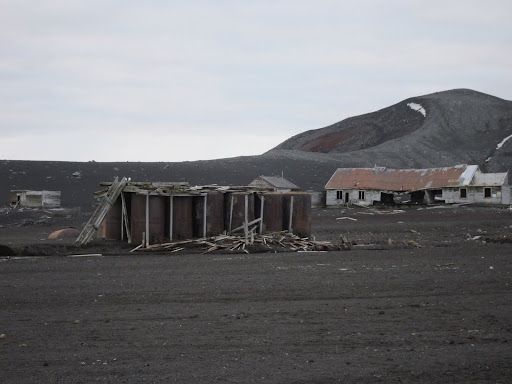 Having struck out with the morning hike on Half Moon Island, we gave it another shot with Delfin and Chris, who guided us up Mount Pond. The path was a bit rocky and slippery in parts, and it was a struggle hiking up the soft volcanic sand, but it was all worth it for the amazing view. 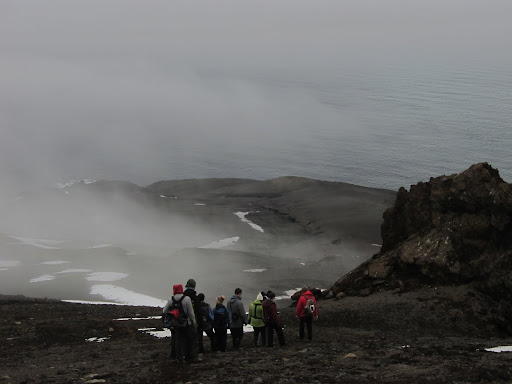 In the distance we could make out the snow-covered peaks of Livingston Island. 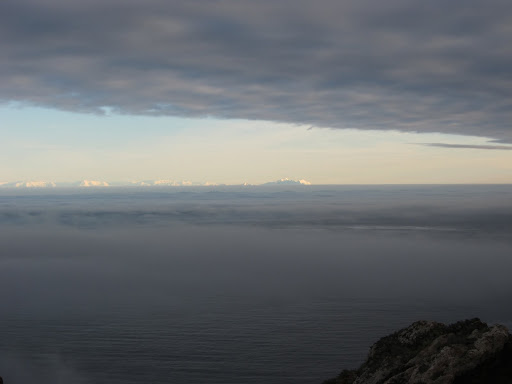 After soaking in the view and taking a few pictures, we headed back down to the ruins and beach in Whaler’s Bay. We had been told this is one of the few locations in Antarctica where it’s possible to swim, and had come prepared, wearing our bathing suits.

A couple of brave people went all the way in, managing to get their heads underwater before quickly running right back out. We weren’t quite as brave (crazy?), deciding instead to dash in quickly up to our knees for a quick photo opp. It was still painfully cold (about 34 deg F), and our feet went numb almost instantly. 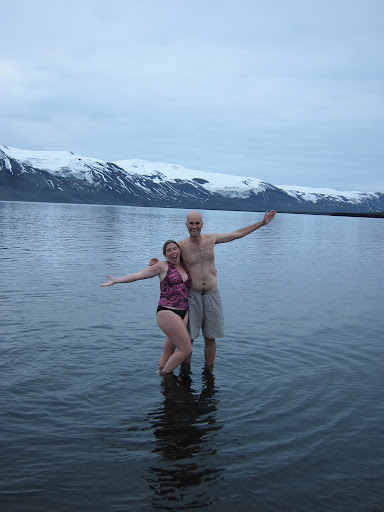 Luckily, the Zodiacs were there waiting to take us back to the ship, where we cleaned up and warmed off, excited about our first day on land in Antarctica.

Thanks to Google Maps Street View, you can explore Half Moon Island, too!