After soaking up the life on the paradise islands of the Perhentians, we decided to check out the nearby national park of Taman Negara.

We caught a boat back to the mainland and then a bus to the small town of Kuala Tahan, which sits across the river from the park. After searching around town for a good hostel we came upon the Tahan Guest House – we’d heard it was pretty nice and cheery and decided to give it a look. As we walked into the beautiful garden, we saw all kinds of uplifting quotes and bright paintings all around. 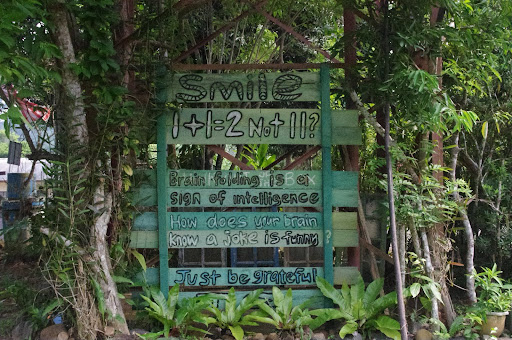 As we found no one at the desk, an adorable little girl with smiles from ear to ear came around the corner. Speaking little English, she said, “Mama, yes, Mama, no?” To which we said, “Mama, yes.” How cute is she? 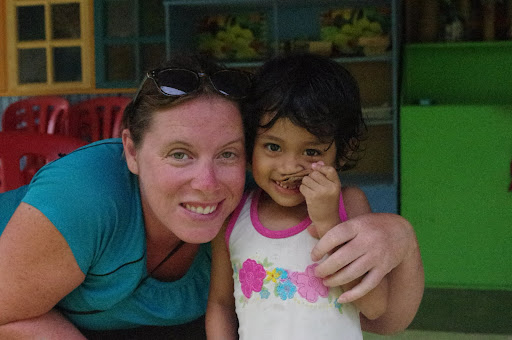 A few minutes later, the woman who runs the place, also with a huge smile, came out and showed us the available rooms. It was simple, but cheerful with many bright paintings all around the room.
As we only needed a room for two nights, we decided it would do. Little did we know, what would happen at 5am… 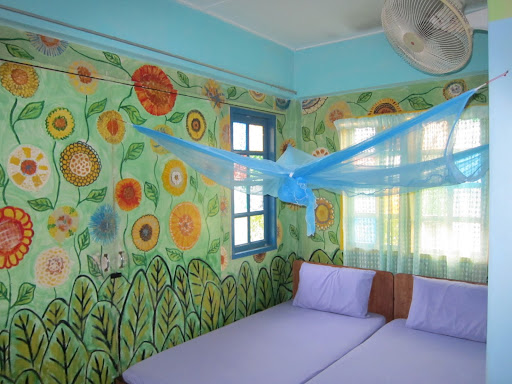 Hunger called and we made our way to The Place in town to eat – the floating restaurant on the river – “Mama Chop.” Although everyone was going for the buffet, we ordered off the a la carte menu. The food was ok, but very cheap. Here, we were also able to book our trip for the night safari for the same night. We arrived with flashlights, bugsprays and our cameras. 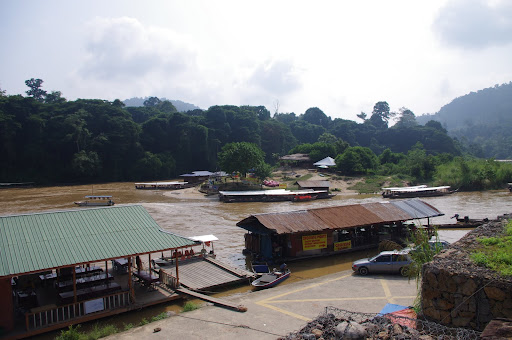 I suppose I had a few too many expectations for such a night safari. About 10-12 of us piled into the back and on top of a standard pick-up truck. Yes, such is safety in Southeast Asia.

After driving through town, we turned down a dirt road onto a neighboring palm oil plantation. They told us this was not the national park, but that we would still see great night wildlife there.
We did not see much, sadly. Highlights included some sleeping birds and leopard cats, which appear to be normal housecats, but they are actually wild and quite aggressive when provoked. 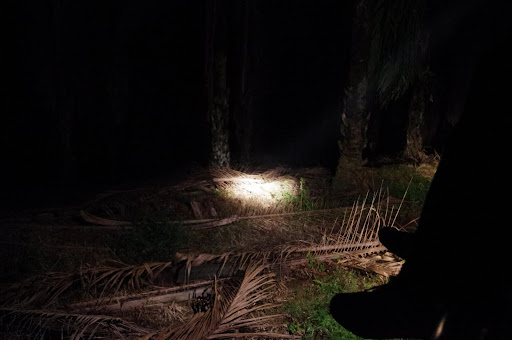 They are beautiful animals and it was spectacular seeing their leopard like coats in the light of night. We also saw a very small snake. If we were left to our own devices, I’m sure none of us would have seen it, but our spotter armed with his huge strong flashlight found this tiny snake. After telling us it was harmless, he proceeded to
allow it to bite him. Yikes! He asked if anyone wanted to hold it – no, thank you! 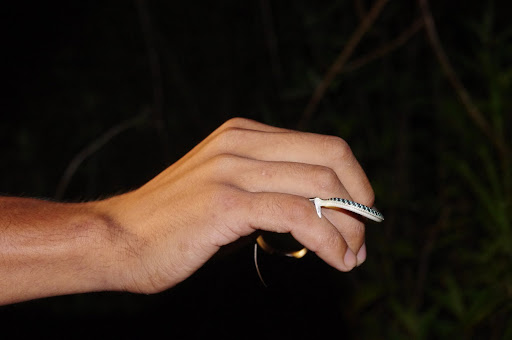 The highlight of the night had to be our huge python. I have no idea how he spotted it, but our guide found this huge 5 meter snake among the leaves in the dark.

Some brave souls (Erik included) ventured into the leaves and got a close view of the snake. It was cool to see and I was happy to do so from the “safety” of the pick-up truck. It was sort of a disappointing night, but it was neat to see some wildlife.

The next day, we were stirred from our sleep by the click of the sound system at the mosque next-door, which seemed to be pointed directly at us. We hadn’t realized just how close we were and we jarred awake by the loud morning call to worship. We took the cheap boat across the river to the national park. In an attempt to avoid leeches, I wore very high socks! 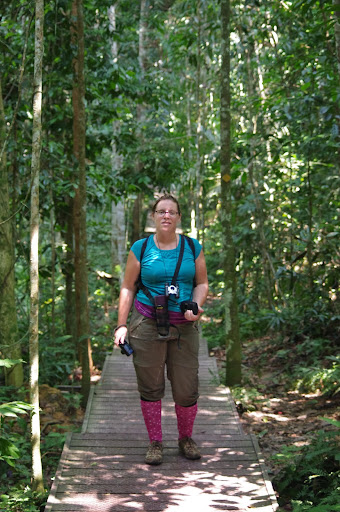 We were welcomed by some grey macaque monkeys, and a couple of them even had little babies hanging on to them! 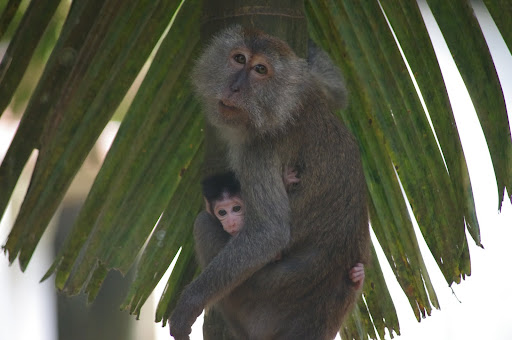 The park was nice and we saw some huge trees, but our wildlife walk through the rainforest showed us very few animals. 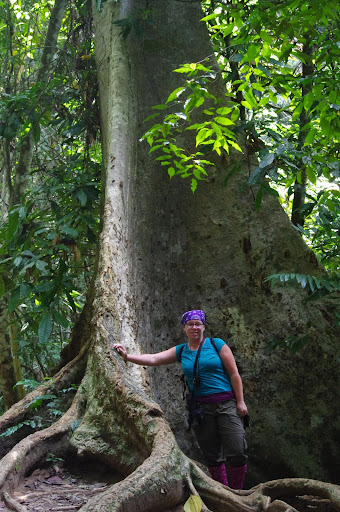 The walk did take us to great heights as we walked among the scary-high canopies of the rainforest. 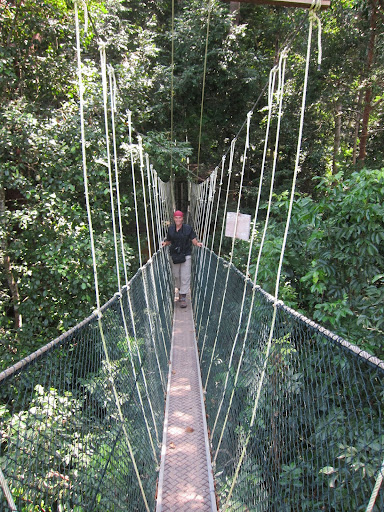 The hike also lead us to some fantastic panoramic views of the area. 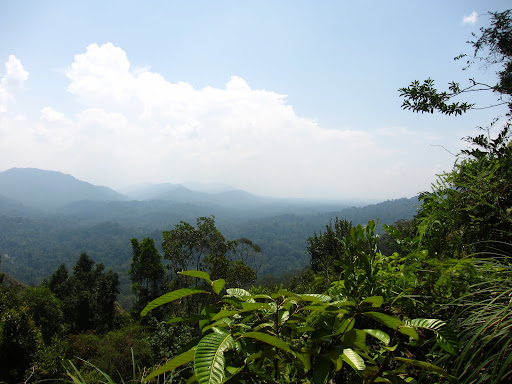 We managed to see some gigantic ants that had to be at least an inch in length! 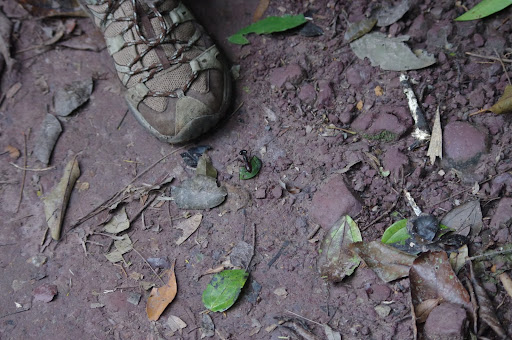 And even a huge lizard of some sort. A few birds here and there, but otherwise, we didn’t see much else. 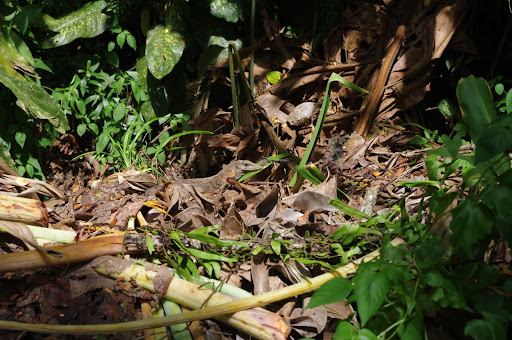 I suppose we should have heeded the advice of other travellers and gave it a miss. But, it was a nice little stop along our way. And cute, adorable Maya more than made up for it – just look at her beautiful face! 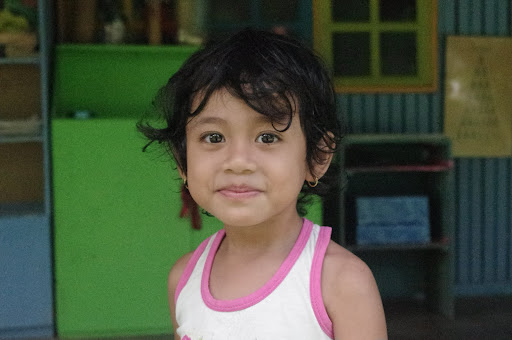 3 thoughts on “Going Bamboo in the Jungles of Taman Negara, Malaysia”