We didn’t originally make plans to visit Myanmar (formerly known as Burma) – the large, mysterious country sandwiched between India, China, and Thailand that has been under military rule for the past half century and effectively shut off from the rest of the world. But as we traveled through Southeast Asia, we kept bumping into other travelers that were raving about it. The more we heard about Burma, the more we wanted to go.

By the time we were ready to make this decision, we had already been on the road two years – the first year traveling through Latin America from Mexico to Tierra del Fuego, Argentina (and a side trip to Antarctica), and the second year in Southeast Asia (along with a few months in Australia and New Zealand).

That first year of travel had been the most rewarding – we were interacting with locals (speaking a little Spanish helped) and really felt like we were having an authentic, adventurous experience. But in Southeast Asia, we often felt cut off, trapped in the tourist bubble, and struggling to get off the beaten path. These days, most countries in this area, like Thailand, are completely overrun with tourists. People visit for all the right reasons – amazing beaches, fantastic food, and fascinating culture, among others. The problem is, as more and more western tourists start pouring in, these places start losing some of the magic that attracted people in the very first place. The beaches become crowded and polluted, prices skyrocket, scams abound, and the fantastic local restaurants are replaced by touristy pizza places sandwiched in with Irish pubs broadcasting European soccer matches. 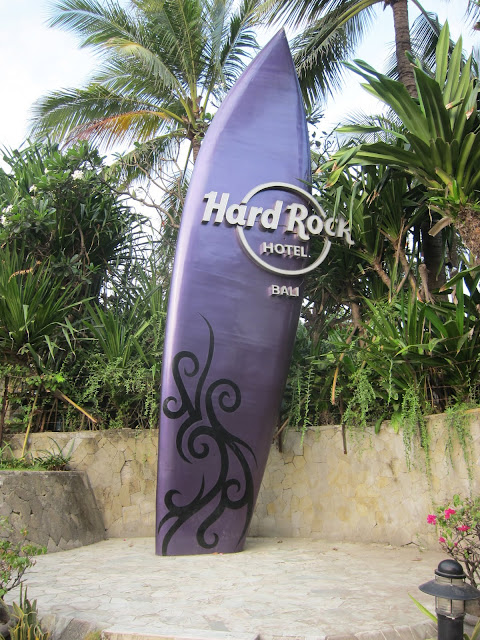 So when we heard about Burma, we were intrigued. Since a military coup in 1962, the country had been ruled with an iron fist by the military junta. With one of the worst human rights records on the planet, the totalitarian country was shunned by the rest of the world. Once the wealthiest country in Southeast Asia, Burma soon became one of the poorest and least developed. In an effort to maintain control, the paranoid rulers squashed all basic rights. Any “gathering” of more than two people was outlawed, ethnic minorities were marked for extermination, and thousands of political prisoners were put into forced labor camps and jailed – most famously the Nobel Peace Prize winner, Aung San Suu Kyi.

For years, “The Lady” herself (Suu Kyi) called for a boycott on tourism, which funded the military junta and supported their oppressive government. But, in 2010 things started changing. The new general-turned-president Thein Sein started instituting reforms. Aung San Suu Kyi was released from 15 years of house arrest. And in 2012, she was elected into Parliament with her National League of Democracy (NLD) party. These positive steps have led to a reversal in the travel boycott, the lifting of crippling economic sanctions, and a renewed interest in the country. 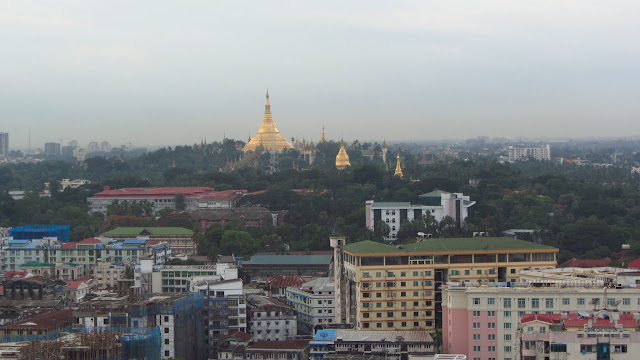 This was our chance to see Burma, before it became forever changed by tourism and the foreign corporations. We had to go.

Burma can be a bit of a challenge. When we visited (May, 2012 – the situation may be different now), there were no ATM machines or credit card facilities in the entire country. Traveling there required carrying a huge amount of pristine hundred dollar American bills. We stocked up on these in Cambodia (where they are readily available), doing our best to avoid even the slightest imperfection. Once we had picked out $1,400 worth of the best Benjamins, we made a special cardboard carrying case to keep the bills flat and wrinkle free. We thought we had done everything right, until we arrived at Yangon international airport and went to exchange some of our US dollars for the local kyat currency. 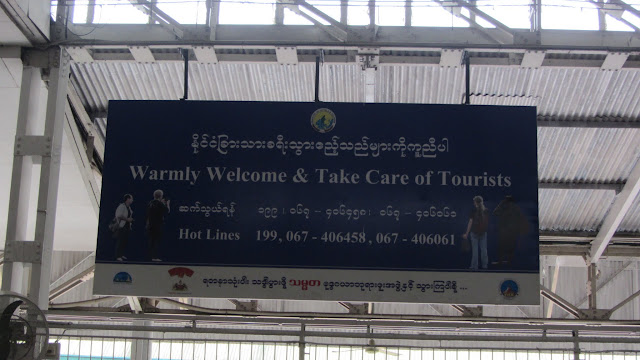 “Sorry, sir, do you have a different one?”, the teller asked as I handed her one seemingly perfect bill after another.

I was starting to panic. We needed this money to survive. Would we need to go begging at the US embassy, or even catch an early flight out of the country?

We decided to tighten the belt and economize as much as possible, while we kept trying to exchange the rejected bills. Hopefully, we would just squeak by in the three weeks we had planned.

The other problem with travelling in Burma is that it can be really difficult to get reliable travel information. With the country experiencing rapid changes, guidebooks are obsolete as soon as they are printed. In addition, internet access is practically non-existant (and painfully slow when available), making it impossible to look things up online. So, the best thing to do in these circumstances is tap into the traveler network, asking people you meet along the way. The best place to connect with this network in the capital Yangon is the Motherland 2 Inn. They also provide a free airport pickup. 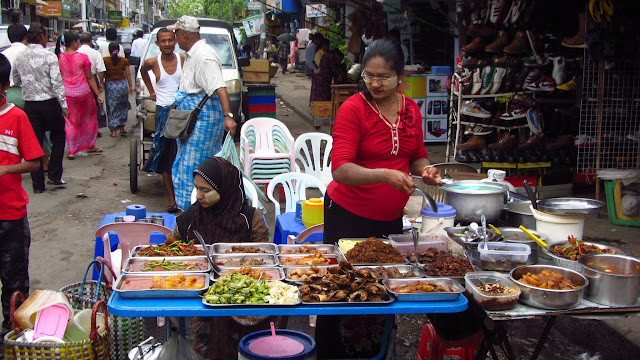 Since we had to fly back from Yangon, we decided to save most of the sightseeing for the end and just spend one night here, before pressing on to farther-flung destinations. This still gave us the chance to see a little bit of the city. 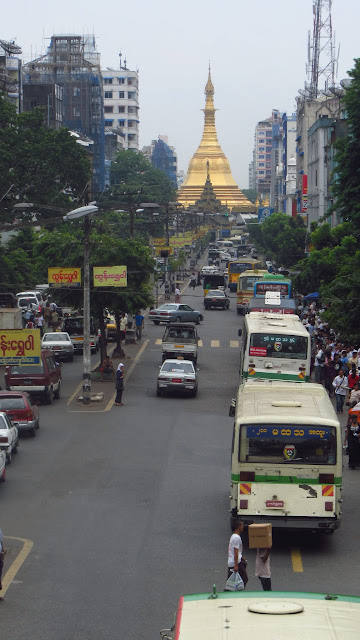 We took a self-guided walking tour, checking out a lot of the grand, crumbling colonial buildings built by the British. 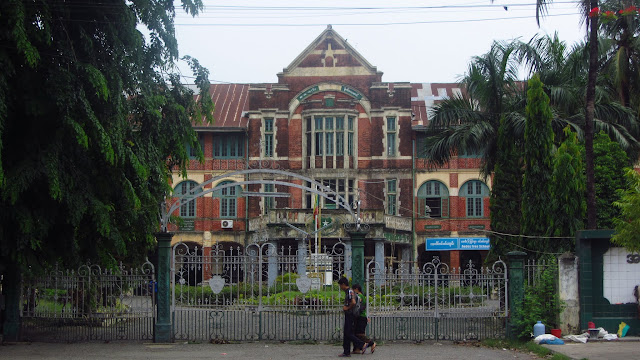 Having just come from the uber-touristy part of Southeast Asia, we were shocked to find warm locals stopping to chat with us – not trying to sell us something or scam us – just, genuinely friendly and curious people. They thanked us for visiting Burma and asked questions about the US.

Little kids walking down the street yelled out “Mingalaba!” (hello) to us as we walked past and shook our hands. We were already seeing why so many people had recommended this place to us. 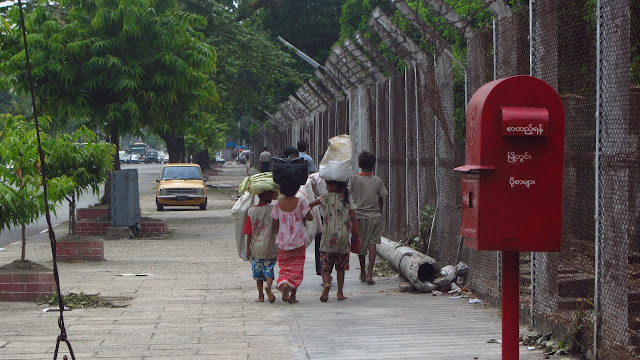 The Burmese are notoriously fond of astrology, numerology, and other mystic signs. The superstitious generals even made major policy decisions based upon the advice of in-house astrologists and numerologists. Not wanting to get left out of this action, I decided to have my palm read by one of the many palm readers lining the sidewalks.

After jotting down my birthdate and doing some calculations, he grabbed my right hand and started inspecting my palm. Using a black pen, he drew over some of the lines on my hand, telling me they were very good, strong lines – I would live a long, happy, and prosperous life. 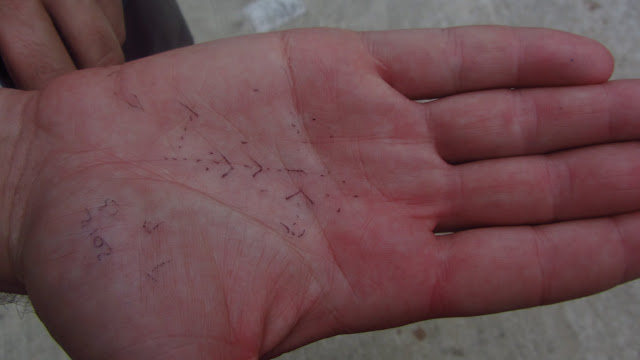 I suppose I should have been happy with this reading. Still, it wasn’t very exciting. 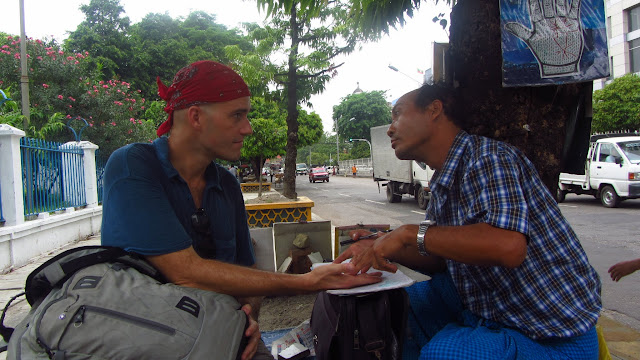 Finally, we hopped into an ancient, overcrowded bus for the ride up to Shwedagon Pagoda, the most important temple in the country.

We were sweating buckets as we slipped off our shoes and shuffled up the steps to the massive gold-covered stupa, which is topped with thousands and thousands of diamonds, rubies, and other precious stones. 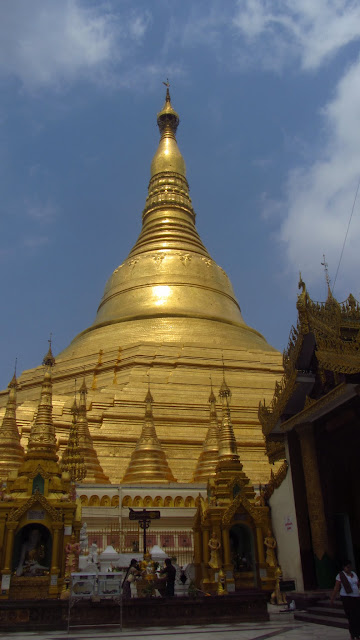 While admiring the bells, statues, and stupas around the pagoda, we met some young monks, eager to practice their english and ask us questions about America. 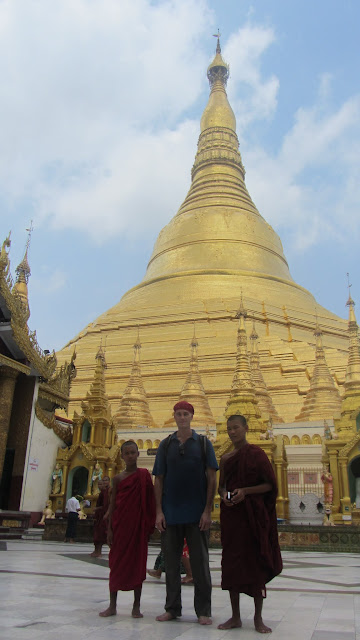 After this quick one-day tour of the city, we headed back to Motherland 2 Inn and prepared for our night bus to the ancient city of Bagan…

3 thoughts on “Getting to Burma – Yangon, Myanmar”