A 5am bus is never really fun, but somehow we got up, packed and headed out into the darkness for our three hour trip to Bogota. With a population of nearly 9 million, this capital city ranks up there with the world’s largest, including our own New York City (10 million). We hadn’t been in a huge city since Mexico City, and coming from San Gil and Villa de Leyva, the traffic, skyscrapers and sheer masses of people had us a bit befuddled. Bogota is a city of juxtapositions: new and old, peaceful and hectic, old cobblestone plazas surrounded by gigantic skyscrapers.

We checked into another brand new hostel, North House, that had only opened three weeks before in the trendy Zona Rosa neighborhood. This old house has been converted into a charming comfortable hostel. Since very were few people that knew about it and it wasn’t yet in any guidebooks, we lucked out and had a whole 6-person dorm room to ourselves. 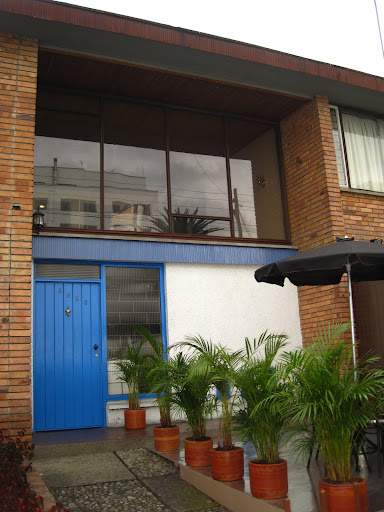 Erik, Michele and I had been intrigued with seeing the famous Salt Cathedral, La Catedral de Sal de Zipaquirá, so after walking a quick two blocks, we jumped on the Transmilenio – believe it or not this huge city does not have a subway system, but there is a fast multi-line bus system which has its own lane, so traveling throughout the city is fairly quick. Once we got to the Salt Cathedral and finally found the ticket window, we were a bit turned off by the food court atmosphere and the rock climbing wall. We felt a bit like we were at a theme park. I had thought this underground cathedral was hundreds of years old with an interesting history. But when we found out this cathedral built in an old salt mine had just opened in 1995, we were a bit less than thrilled. 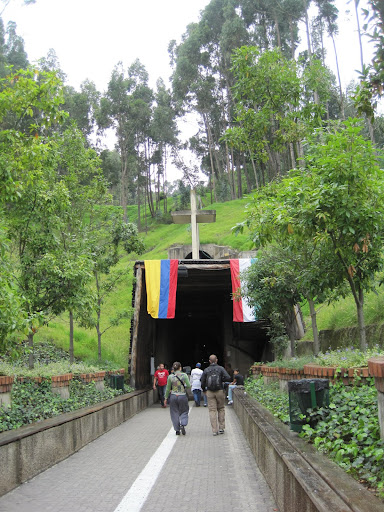 It was interesting to go underground through the tunnels and see the many chapels, but honestly, they all looked pretty much the same. I thought it would be this huge open cavern and inside a gorgeous intricate illuminated cathedral. Well, I was wrong. The place seems set up as a way to make money off of tourists, but the main hall is quite impressive. We found it odd, though, that if church members want to attend mass there, they too have to pay the $17,000 Colombian peso (nearly $10) entrance fee. Strange and not very holy, I would say. 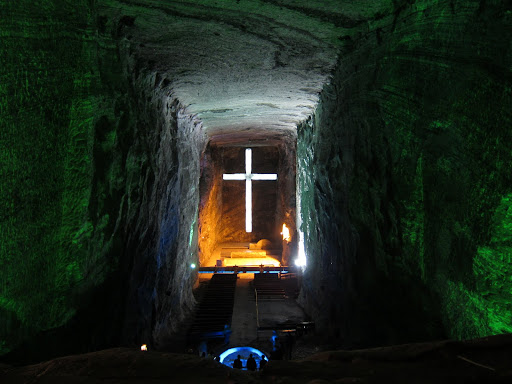 The big excitement of the day was when we went on the miners’ tour. In reflection of recent events in the amazing rescue in Chile, and mine collapses in Ecuador and China, this experience really helps me empathize a bit with what these miners go through. We put on helmets and headlamps and for 25m, we walked in complete darkness through a very narrow simulated mine tunnel. We were petrified. The three of us kept bumping into each other and calling out for each other, even though we were just inches away. In complete darkness and with the tunnel’s acoustics, it was impossible to sense any distance. I cannot even imagine spending 69 days in those conditions (and worse) – we could barely stand it a few minutes. 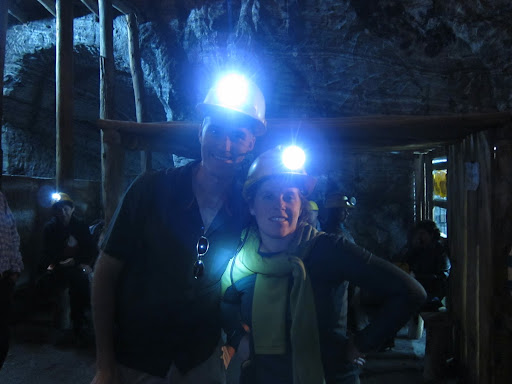 That night, we met up with my Uncle Carlos’ cousin, also named Carlos. He was a blast and took us out for some delicious Mexican food. Along with his friend Gabriel, we went on a quick night tour through the trendy T Zone of popular restaurants and bars and a bit of the older part of the city. We all had a few laughs and a few drinks and, of course, more Aguardiente at a cozy British pub. I was so glad to meet Carlos, who showed us a great night in Bogota. 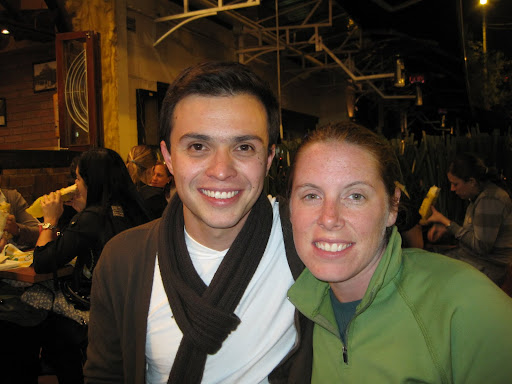 While in Bogota, we took the very steep teleferico (cablecar) up to a mountaintop 10,400ft. high, upon which sat a simple white church. We soaked in the amazing view of this huge metropolis until we got very cold. Much like Villa de Leyva, the nights were very cold and had us layering up in our fleeces. We kept asking ourselves, isn’t it supposed to be hot in South America and so close to the Equator?

The next day was Sept. 11th. It hits me hard every year and even though we were miles away, my heart was right back in the States thinking of those we tragically lost 9 years ago. After we made breakfast at the hostel, we went to the city center and visited the Gold Museum, which was ok, the main square, the Cathedral, the Botero museum and Erik’s favorite, Casa de Moneda, the House of Money. It was quite interesting to see the changes in Colombia’s currency and the antique machines they used to print it throughout the years. I had been telling Michele about obleas and we finally found them in Bogota’s main square. 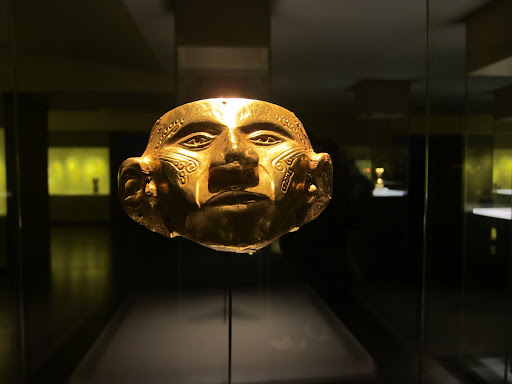 We walked around the bohemian part of town, La Candelaria, which had very narrow alleys brimming with cafes, bookshops, bottle shops and restaurants. It was fun during the day, and although all of the other hostels are in that area, it is said to be quite dangerous at night. 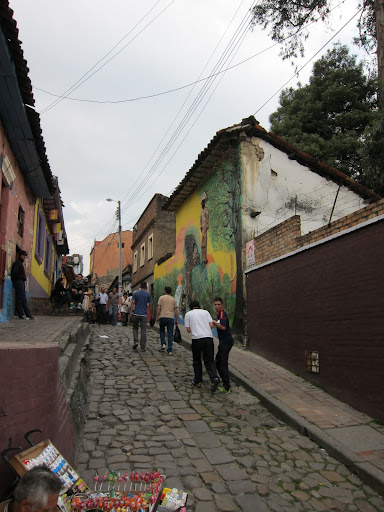 The next morning, we were sad to say goodbye to Michele, who was taking a flight to Leticia to catch a boat down the Amazon. We’re hoping we see her again in Peru. Erik and I went to the Torre Colpatria which opens its highest floor on the weekends as an observatory with great views of the city. 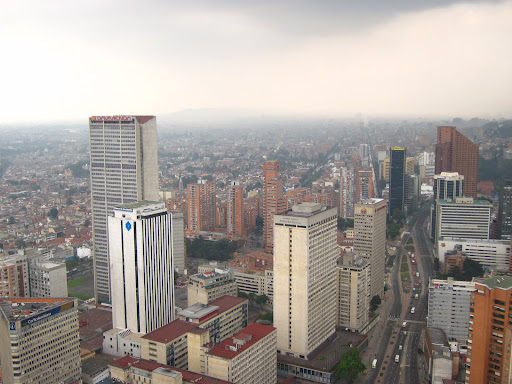 With the streets closed to traffic, we strolled over to the Sunday flea market where we got some fresh fruit and a delicious cup of mandarin orange juice. And thanks to my Spanish, I got a beautiful blue topaz ring set in sterling silver for a steal! The couple selling jewelry at the table even asked me to translate prices to an English woman who spoke no Spanish. We finally found the Modern Art museum where we saw some very interesting installations and videos about Colombian art. 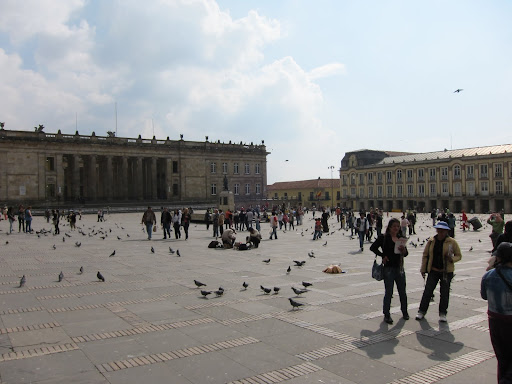 After enjoying the big city of Bogota for a few days, we packed up and headed to Colombia’s second largest city, Medellin.