We left Cordoba heading West to Mendoza, situated in the high plains bordering Chile, with the towering Andes Mountain range in sight.

Mendoza is, of course, famous for being the heart of winemaking in Argentina, responsible for nearly two-thirds of the country’s wine production. Having recently visited the white-wine region of Cafayate in the North, we were excited to tour Mendoza and sample some reds.

There are a couple of ways to visit the bodegas (wineries) in the nearby Maipu valley, with most backpackers opting for the most budget-friendly method of renting a bike for they day and cycling between the bodegas. Heather had a few fears about drinking and cycling, but I assured her we would be OK.

On a sunny and hot Saturday morning, we caught a local bus to nearby Maipu, intent on getting off at Mr Hugo’s Bikes, which came highly recommended. It seems competition is fierce, though, as other companies petitioned us not only at the bus stop in Mendoza, but on the bus itself, and even right in front of Mr Hugo’s once we had got off! 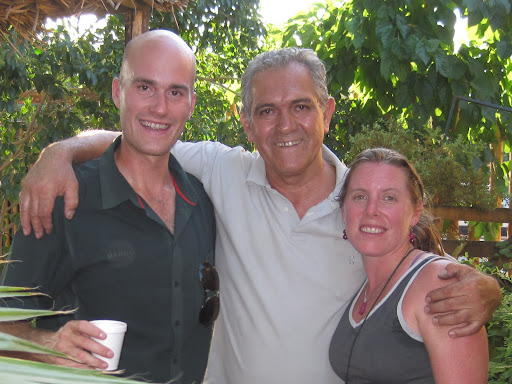 In the end, we were glad we went with Mr Hugo. The guy is a legend – always smiling and happy to be doing what he is doing. He got us sorted out with two good-quality bikes, a map of the region, and even started us out with a glass of wine!

We started at the “La Rural” bodega and wine museum. They only let us sample one less-than stellar Malbec there, but there was an interesting tour of the museum, which included old equipment used in the winemaking process. 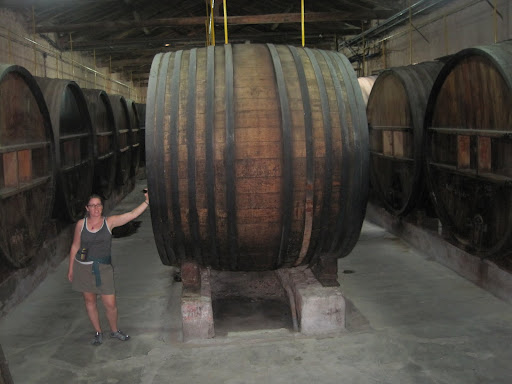 After that, we pedaled to the nearby Chocolateria “A la Antigua”. While this was not a winery, they made a huge assortment of homemade specialty products, such as jams, spreads, olive oil, liquors, and of course, chocolate. 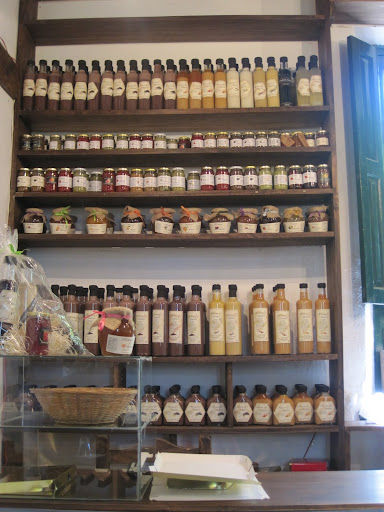 For less than $4 each, they generously let us sample anything we wanted to. Our favorites were the delicious coconut and coffee-flavored dulce de leche spreads. Heather even sampled the dangerously-strong homemade absinthe, which was prepared traditionally by lighting a spoon of sugar on fire and stirring up the mixture. 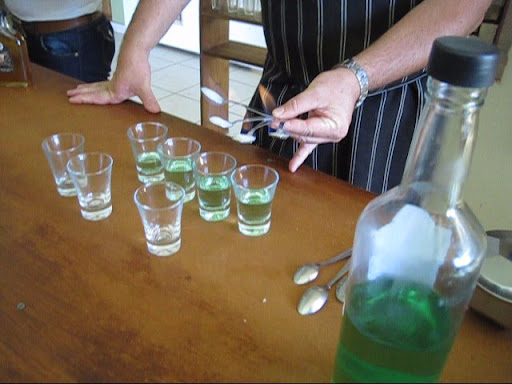 We visited another artisanal products company after that, Historias y Sabores, which was still good, but not as great as A la Antigua. By now, it was approaching 1pm though, so we had to keep moving if we wanted to squeeze in many more bodegas. 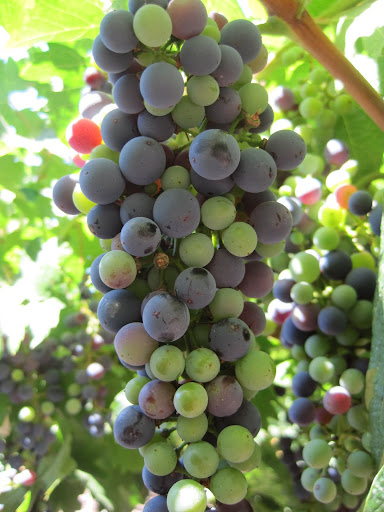 Trapiche is a large, well-known brand from this region, which exports heavily to the US. We were informed the last tour of the day would be at 2pm, so we stopped for a snack and some sobering sodas at a nearby beer garden. 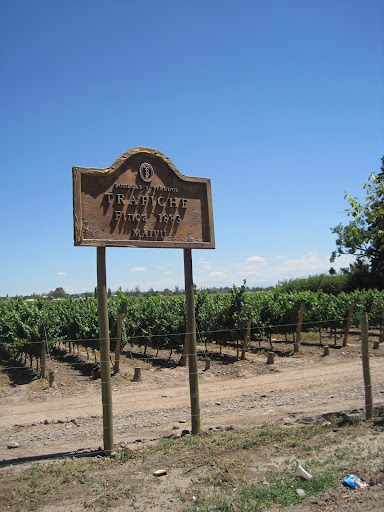 The Trapiche tour was offered in a beautifully restored facility, and we were given the opportunity to sample everything from a sparkling wine up to some full-bodied reds. The tasting room was exquisitely designed, with a glass floor in the center looking down onto the oak casks in the cellar below. 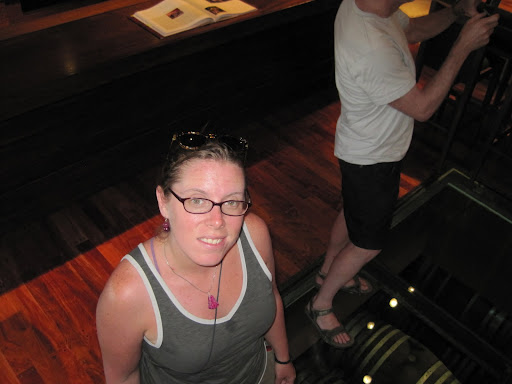 The strong, hot sun greeted us as we exited the wine cellars. We hopped on the bikes once again and set off for the smaller Familia Di Tommaso bodega, which was a few kilometers down the road. Luckily, we arrived just in time for a tour, which brought us through the vineyards and production facilities, housed in a historical building which is more than 100 years old. 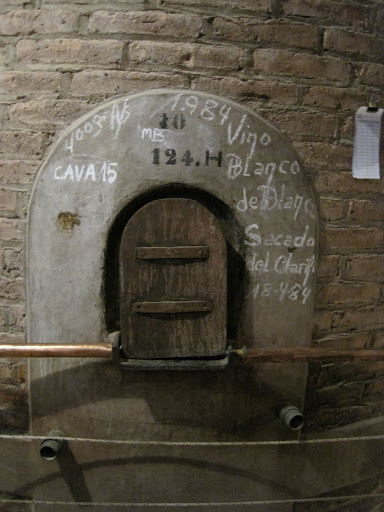 After yet another tasting, we grabbed a lunch on the winery’s patio, overlooking the lush green vineyards. As Heather is not a fan of red wines, we opted for one of Tommaso’s whites to accompany our meals. The food was only OK, given the price, but the wine and setting were spectacular. 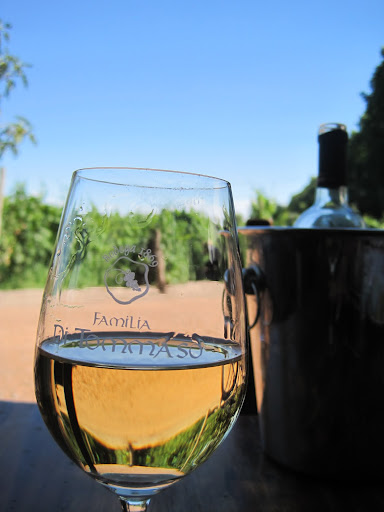 Looking at the clock we got worried; there was much more to go and we would need to peddle fast! Back on the bikes, and by now feeling a bit tired from both the wine and the cycling, we picked up the pace and headed towards the farthest bodega on the map – Bodega Carinae. We opted to skip the tour and go straight to the tasting. Heather was delighted when they gave her the option of trying some of the Carinae’s whites instead of the usual lineup of reds. 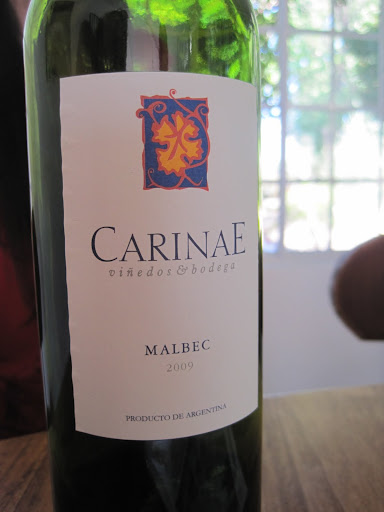 It was now approaching 6pm, the time we had agreed to return our bikes to Mr Hugo, and we were about 10km (6 miles) away. We knew it was a long ride back, but figured we had time for one final stop at Bodega Vistandes. Luck was with us once again as we joined a tour in the second-floor tasting room in this modern facility, overlooking the vineyards and Andes mountain range. We really enjoyed the wines at Vistandes (or perhaps we only thought we enjoyed them because of all the wines in our systems at this point) and were glad we squeezed in this bodega. 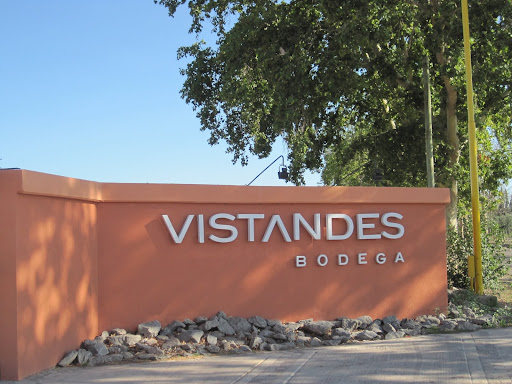 We cycled quickly back to Mr Hugo’s in order to drop off our bikes by the agreed 7pm cutoff. As we arrived, though, it became clear we had rushed back unnecessarily. Many other tourists were lounging around the garden drinking wine, with Mr Hugo circulating around constantly to make sure nobody had an empty glass. We decided to join the party and grabbed a glass and a seat next to an Australian couple traveling North; it was very useful exchanging information on past and prior destinations. 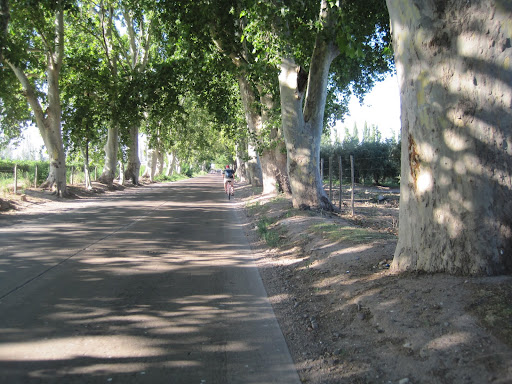 After quite a few more glasses of wine, we were ready to head back to Mendoza. Mr Hugo kindly flagged down a bus for us and hugged us all goodbye. What a guy! We were touched by his warmth and kindness, and glad we had gone with him over one of the knock-off competitors.

We spent a few more days in Mendoza, enjoy the wine and sunshine, but eventually it was time to head farther West over the mountains and into Chile.