After the madness of Hanoi and the disappointment of our Alova Gold Cruise in nearby Halong Bay, we were looking forward to heading south and moving on to other places in Vietnam. The journey to Hue, in the center of the country, would be a long one. We had heard bad things about the cheap and plentiful sleeper buses, which have earned the nickname “rolling coffins” and decided to try the train. Having also heard a few bad things about the train, we opted for the expensive “tourist train” with Livitrans, swayed by the clean and comfortable looking photos on their website.

Unfortunately, we ended up paying extra for a filthy train that was absolutely crawling with cockroaches. They were all over the floors, the walls, and even the mattresses. Before we had pulled out of Hanoi station, we hunted down the train conductor, who seemed completely unimpressed with our request to change cabins. Eventually, he found us a different cabin down the hall which he half-heartedly prepared by wiping down the walls using a wet towel. Unfortunately, this cabin was just as infested as the first one. Completely skeeved out by the crawling walls and roaches dancing on our pillows, we spent most of the night spraying every possible surface with DEET and playing wack-a-mole along with our cabinmates. Needless to say, we did not get a great night’s sleep. 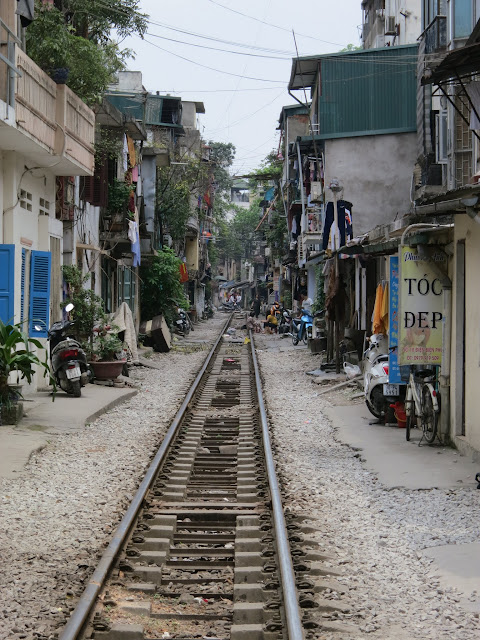 Our luck changed when we finally made it to Hue and checked in at the fabulous Than Thien – Friendly Hotel. For $16 a night we got a luxurious (cockroach free!) room with AC, LCD TV, a comfortable bed, and a buffet breakfast. The hotel staff also arranged a tour for the following day and recommended some restaurants around town. We really enjoyed the food in Hue, where royal cuisine distinct to Vietnam is still enjoyed. In particular, we enjoyed the bún bò huế, which is similar to the ubiquitous pho noodle soup, but with thicker noodles and a stronger flavor. 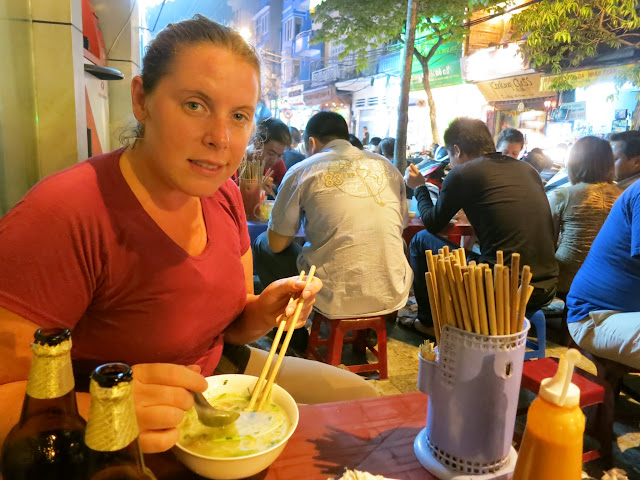 The full day city tour allowed us to soak in the tombs, palaces, and pagodas connected with the Nguyễn Dynasty, which ruled the kingdom of Annam (the pre-revolutionary name for Vietnam) from here in Hue over the period 1802 to 1945. The emperors were really puppets of the colonial French, and in 1945 the last emperor handed power over to Ho Chi Minh.

While a position in the center of the country was useful to the former royal rulers, this ended up placing the city at the center of many bloody battles during the Vietnam War. Sadly, thousands of innocent people were massacred and many of the historically significant buildings were destroyed. One Marine Captain remarked “Did we have to destroy the town in order to save it?” 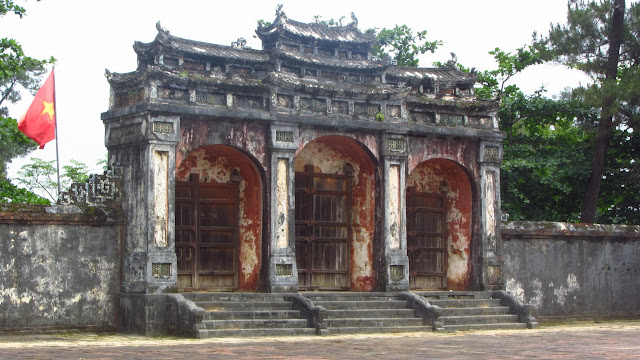 One of the areas most affected by the war was the citadel, the huge city-in-a-city that once served as the seat of the imperial government. While they have been hard at work for more than two decades trying to restore the citadel, which is Hue’s primary attraction, back to its original glory, large parts of it have been reduced to nothing more than empty fields. 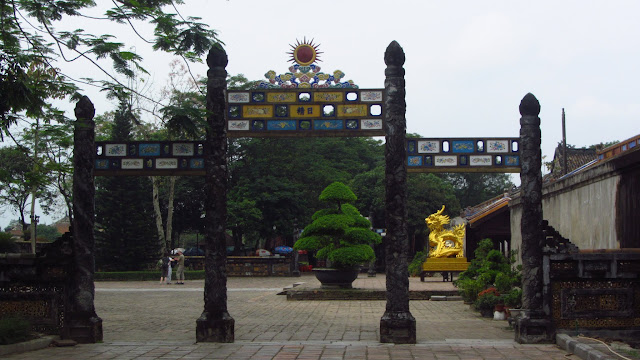 While Buddhism is the predominant religion in Vietnam, practitioners follow Mahayana Buddhism here versus the Theravada Buddhism found in most other parts of Southeast Asia. This branch blends in many Chinese concepts, including Confucianism and Taoism, and the architecture of temples (which are referred to as pagodas in Vietnam) is much different than what you might find in neighboring Laos or Cambodia. 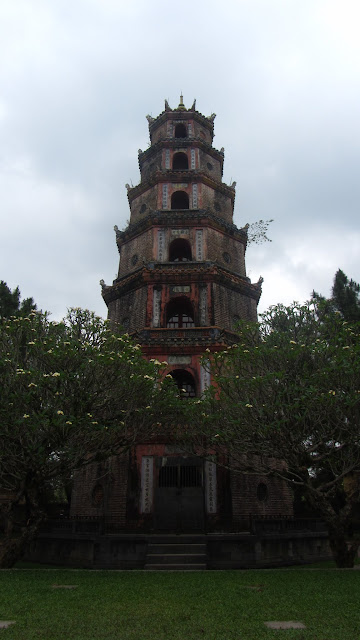 At the Thien Mu Pagoda, we were able to see the car used by Buddhist monk Thich Quang Duc. This monk was made famous with a Pulitzer-prize winning photograph that was published around the world following his self-immolation in protest of South Vietnam’s treatment of Buddhists. You can even see this same car in that iconic photograph. 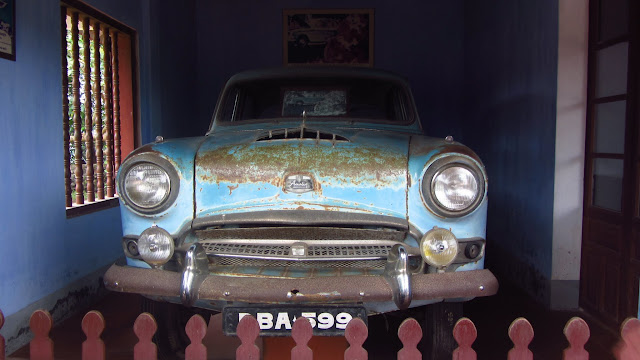 Just south of the city lie the sprawling tombs of the emperors. Each tomb site is unique, taking into account each emperors distinct wishes and interests. Most are in natural, quiet, and peaceful settings – a rarity in Vietnam! 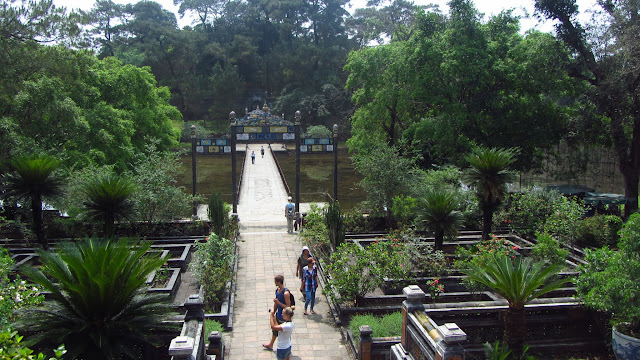 The last emperor to be buried here, Khai Dinh, has a small, but very-well preserved complex. Since this emperor spent a lot of time in Europe, the tomb even incorporates many Western influences. 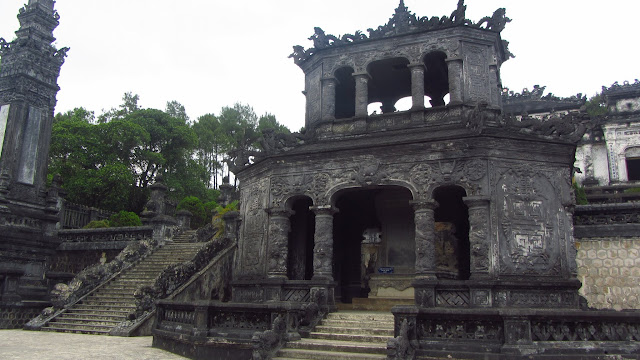 Best of all, though, were the stone statues standing guard just outside. 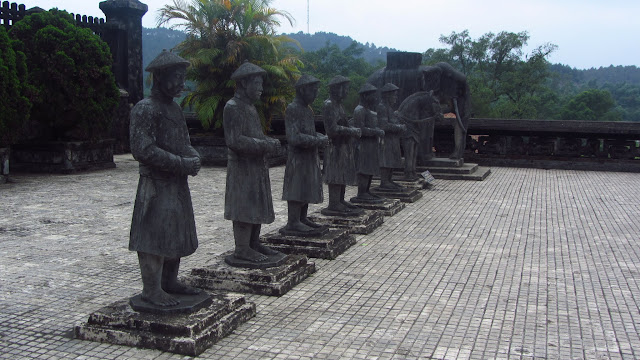 Our time in Hue came to a close with a dragon-boat ride down the perfume river, which intersects the city. 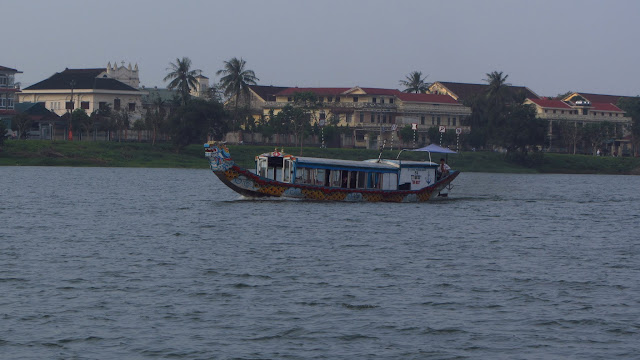 After a few days in relaxing Hue, we were ready to move on to another historic city, Hoi An…