The road journey between Mendoza, Argentina and Santiago, Chile is supposed to be one of the most spectacular in South America. Having heard this, we booked a morning bus from Mendoza so we wouldn’t miss any of the scenery along the way.

As we left the Mendoza Valley, the bus began climbing through the Andean foothills, passing through a gorge of brightly-colored rocks. As we got higher and higher, snow-capped mountain ranges came into sight, and we spotted Aconcagua (6,962m or 22,841 ft), the highest peak in both the Western and Southern Hemispheres (you have to go to the Himalayas to find higher).

We were also able to see the popular tourist attraction Puente del Inca from the bus. This is a natural arch which formed over a river and acted as a bridge, playing an important historical part back to Inca times. 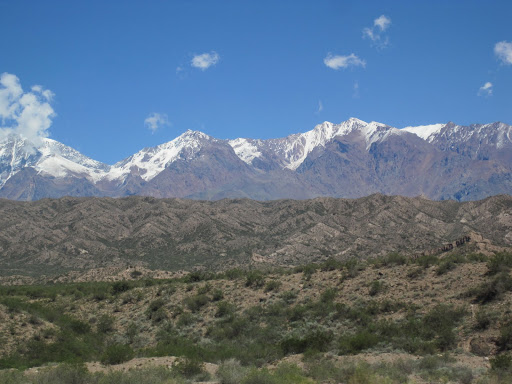 At a height of 3,500m (11,483 ft), we reached the Paso Internacional Los Libertadores, a 4km tunnel to the Chilean side of the border. On the other side, we joined a long queue of cars, buses, and trucks waiting to enter Chile. The country is renowned for its thorough border inspections – it’s illegal to enter the country with any fruits, vegetables, or animal products. Even dried spices, which we were carrying, have to be declared. We ended up spending 3 1/2 hours at the border, waiting, standing in lines, and unpacking everything for inspection. What a pain. 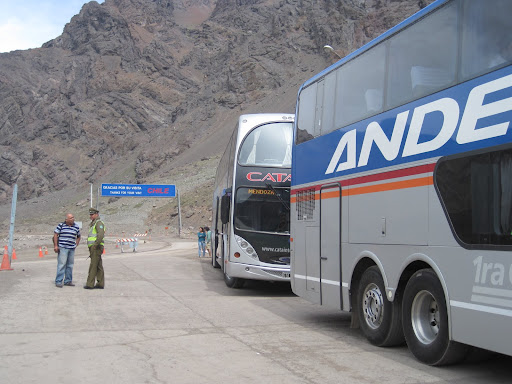 Back on the bus, we passed the immigration checkpoints and started descending through a series of steep switchbacks. Once again, the scenery was stunning, as we zig-zagged around the Portillos ski area (closed for the summer), descending from the mountain pass towards Santiago. 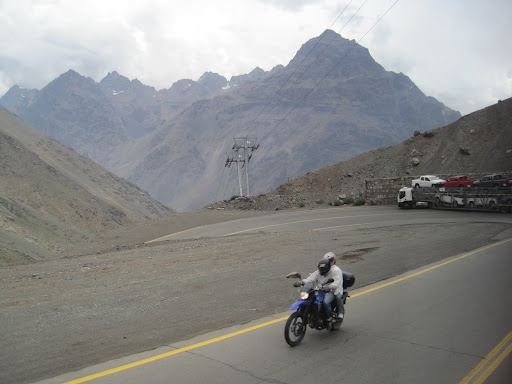 We arrived in Santiago around 8pm, checked into our hostel, and explored the city.

Santiago has a bustling nightlife scene, and even on a Monday night we were impressed. Bars and clubs were overflowing, and there was a large selection of options, from chic and trendy to scruffy and artsy. We took it fairly easy, opting for a low-key place and trying out some of the country’s excellent wines and beers.

In addition to these “standard” beverages, there are a few other drinks Chile is famous for, including the Terremoto (earthquake). This lethal cocktail will literally make your legs shake, making it feel like you are experiencing an earthquake of your own after just one drink. The ingredients are, one large cup of cheap white wine, pineapple ice cream, and either fernet or peppermint schnapps. We opted for the non-traditional peppermint version, which left both of our tongues green, though our knees were not quite shaking. 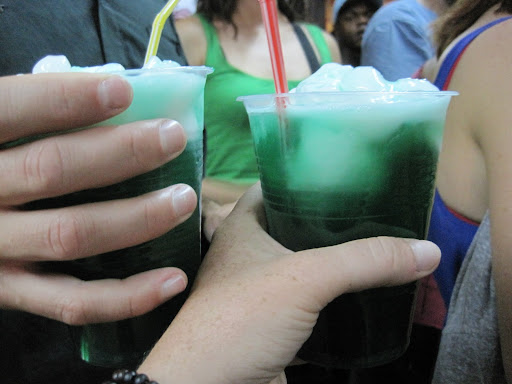 Ordering a second round of Terremotos? Those are called Replicas (aftershocks). 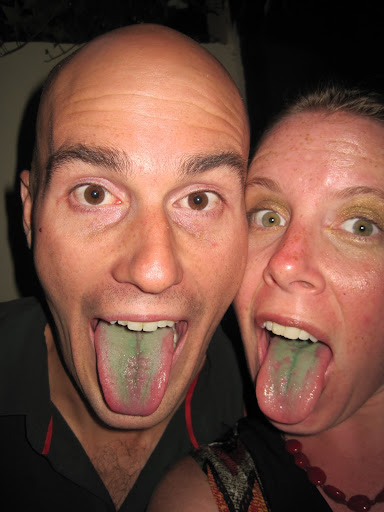 While in Santiago, we took an excellent free walking tour of the city. Franco, our tour guide, took us through the entire downtown area for about 4 hours, showing us some of the most important plazas, buildings, monuments, and neighborhoods. 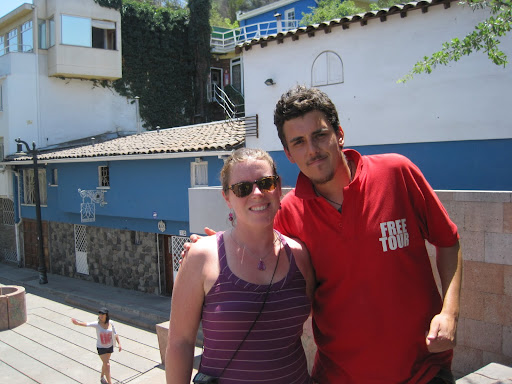 On the tour, we learned the whole story behind Nuts 4 Nuts, which were started in Santiago by an entrepreneur named El Conejo (the rabbit) who struck it big in New York City after striking out on his home turf. He is now a multi-millionaire and has brought Nuts 4 Nuts back to Santiago, where it is doing better than ever. The Rabbit can even be seen occasionally selling nuts himself behind one of his many push carts. 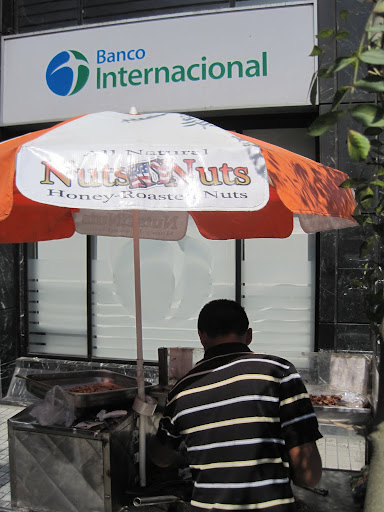 Another funny thing Franco told us about are the Cafe con Piernas (coffee with legs) shops. These coffee shops were set up by enterprising businessmen that knew Chilean coffee was too terrible to drink and hired sexy barristas in short skirts. It’s something like what would happen if Hooters took over Starbucks.

Of course, there was a serious side as well. We learned about Chile’s traumatic period of military dictatorship under General Pinochet, and the country’s subsequent renaissance. Chile is considered the most developed country in Latin America and it’s obvious on the streets of Santiago. The capital is clean, orderly, and (unfortunately for us) expensive – a bit like Europe. 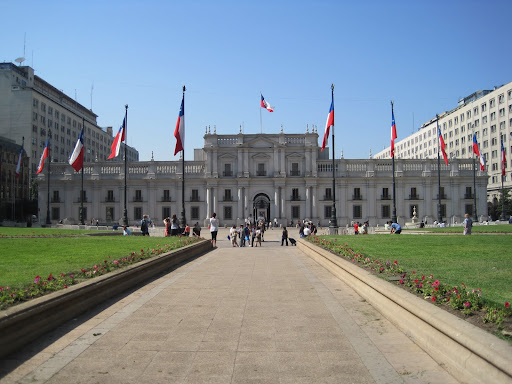 Throughout the walking tour, Franco told us about the earthquakes which have rattled the city over the years. The massive quake last year which registered 8.8 on the Richter scale (about 1,000 times stronger than that in Haiti) was felt here and in other cities across Chile. Luckily, they are used to dealing with earthquakes here, and have strict building codes. Still, evidence could be seen, especially in the older buildings. 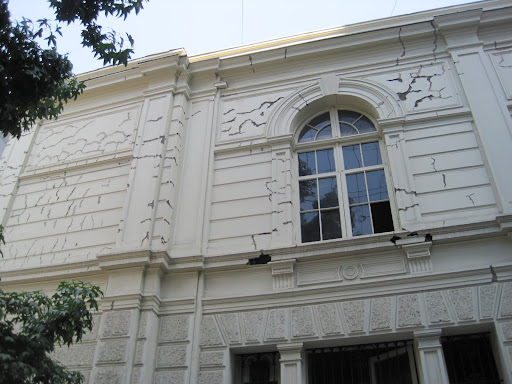 The tour ended in the bohemian Bellavista neighborhood at La Chascona, a house once owned by famous Chilean poet Pablo Neruda. We decided to pay the entrance and peek around the house, which showcased some of Pablo’s eccentric art, furniture, and writings. He had a love of the sea, with other houses on the coast, and much of the interior was built to resemble the inside of a ship. 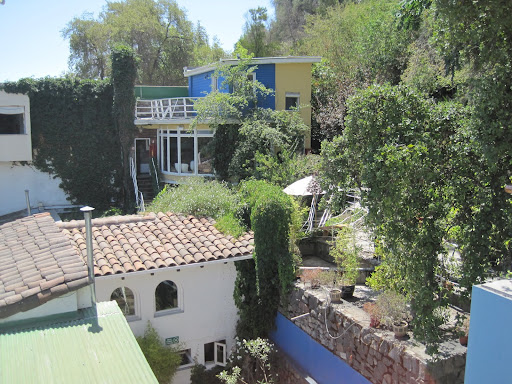 Leaving Neruda’s house, we were a bit lost in the Bellavista neighborhood, until we remembered Franco’s advice to “look for the cell phone building.” This building, the tallest in Chile, was built for the telecom company Telefonica and is said to resemble an old-fashioned cell phone. Luckily, it makes a great landmark. 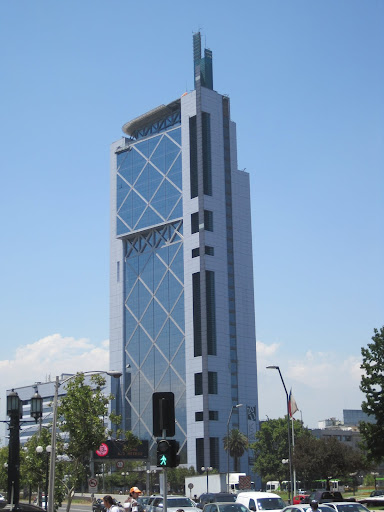 We had few expectations entering Santiago – a city many travelers write off as having little value – and were surprised to find an attractive city with a lot to offer. Next, we decided to head to Valparaiso on the coast, which unlike Santiago was a city we had heard many travelers rave about…