During my first day in India’s chaotic capital, New Delhi, I decided to try out the official Hop On Hop Off (HOHO) tour around the city. This government-sponsored service allows visitors to stop at more than twenty tourist attractions on two separate routes, using a fleet of modern, air-conditioned buses. The buses run every 30 minutes or so.

For Rs. 600 (about US $10), I purchased the Red Route tour, hitting many of the famous highlights around Old Delhi, along with a couple of Mughal-era tombs, and the impressive government structures built by the colonial British. 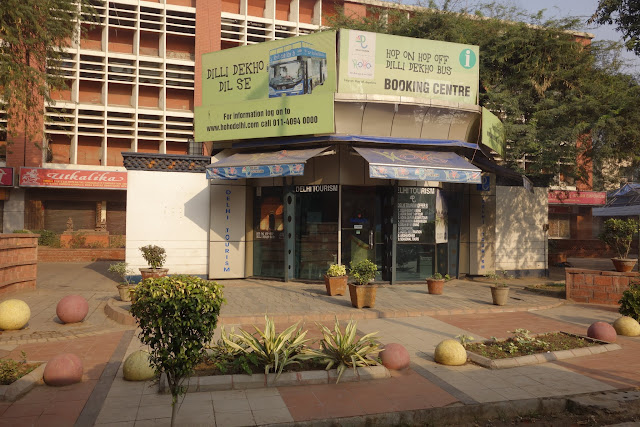 After strolling to Connaught Place from my hotel in neighboring Paharganj, I located the Hop On Hop Off office and joined the first bus leaving that morning. On the bus, I met Vikas, a friendly guy from Calcutta. He was in town for a business trip and only had a few hours to take in the sights. We decided to team up and explore Delhi together, charting out the stops we wanted to make and figuring out the best timing to see as much as possible. 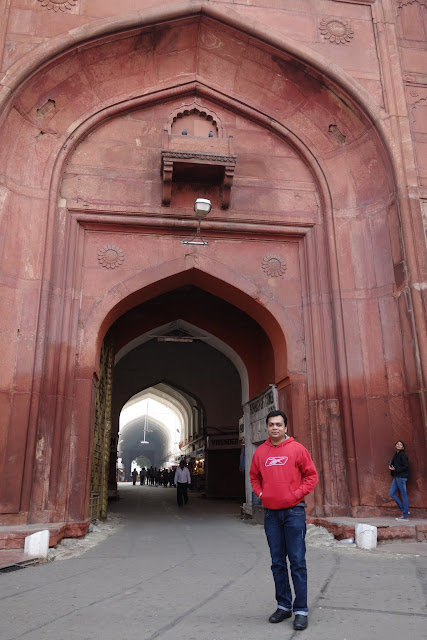 I was very grateful to have made this connection on my first day in India. Even though Vikas himself was a bit of an outsider in Delhi, I was able to learn a lot about India and pick up some essential tips on this first day – everything from how much to tip at the cloak room of a temple to how to negotiate with rickshaw drivers. And, of course, I learned a lot about Indian culture, history, and traditions. 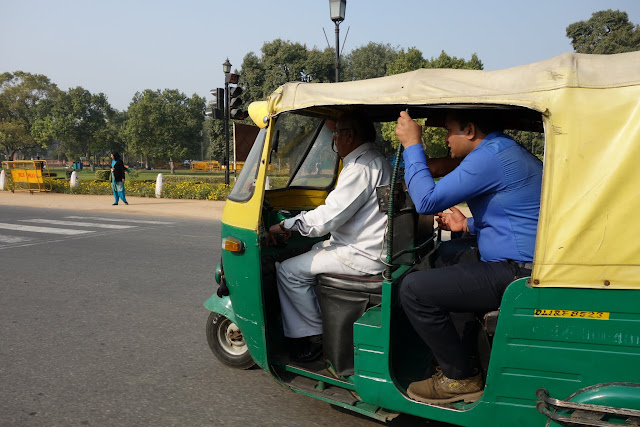 Our first stop was Delhi’s most popular tourist attraction, the Red Fort (Lal Qila). This enormous red sandstone fort was where Mughal Emperor Shah Jahan ruled his kingdom. This same emperor built the Taj Mahal in nearby Agra. 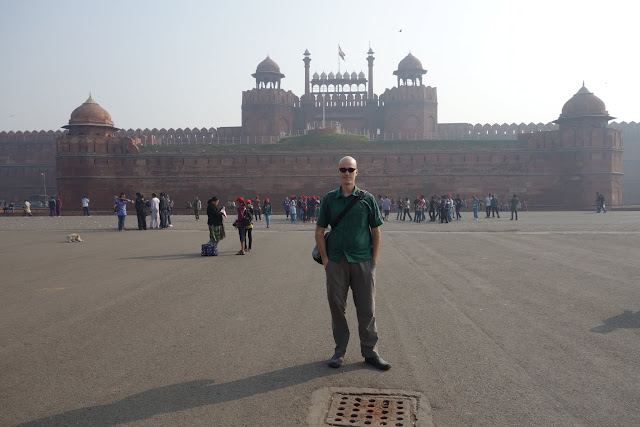 While almost everything of value, including marble inlays, has been stripped from the buildings over the years, the Red Fort is still a magnificent place to escape the madness of Old Delhi and imagine life back in the time of the Mughals. 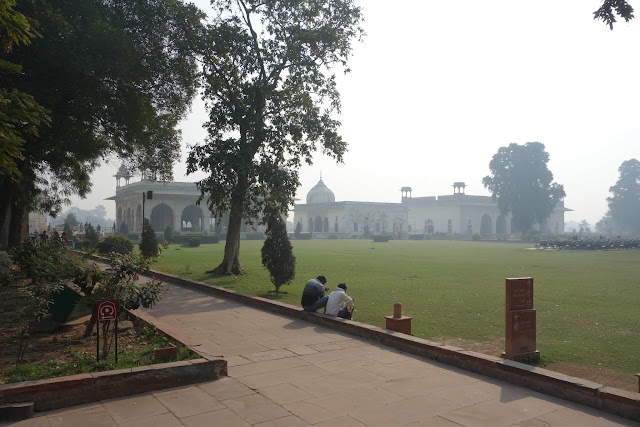 Since we had a little time to kill before the next HOHO bus came by, Vikas and I negotiated with a cycle rickshaw driver to bring us to the nearby Jama Masjid in Old Delhi. This huge mosque was also commissioned by Shah Jahan and built in 1650. It can hold up to twenty-five thousand worshipers and is the largest and most recognizable mosque in the entire country. 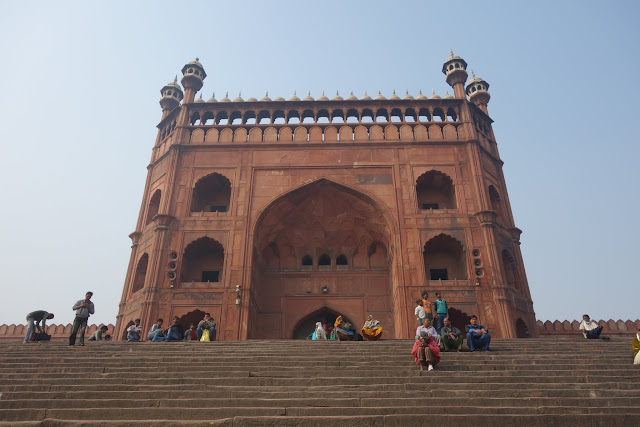 It’s possible to climb one of the 120 ft (40 m) high minar towers, but sadly we were short on time and decided to press on.

Next up was Raj Ghat, a tranquil green park where Mahatma Gandhi, and other famous leaders, are memorialized. 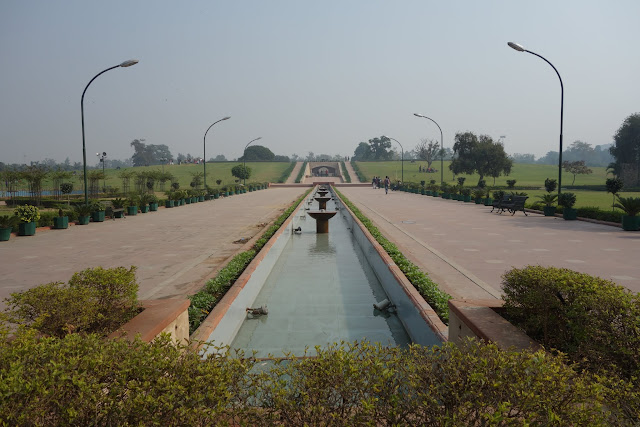 It was here, on a black marble platform, that Gandhi was cremated the day after his assassination in 1948. 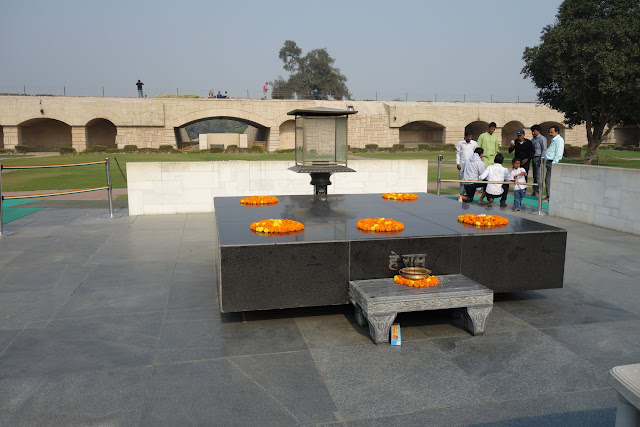 We re-joined the Delhi Hop On Hop Off bus here and continued on to India Gate, the national monument of India built by the British Raj during the construction of New Delhi, their grand colonial capital, relocated from Calcutta. 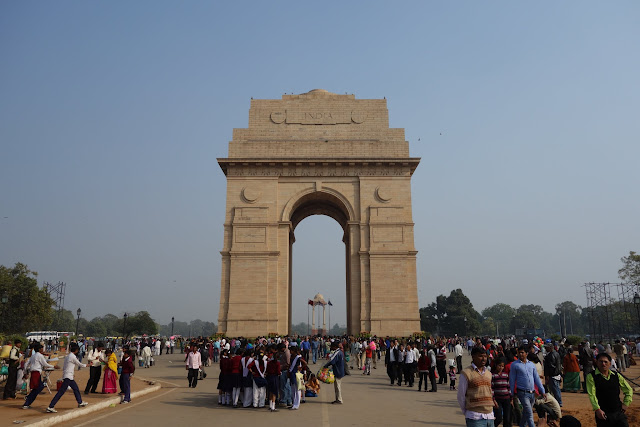 India Gate sits at one end of Rajpath, a huge boulevard that connects many government buildings, including the houses of parliament and the presidential palace. It’s basically New Delhi’s version of the Champs Élysées, and is often used for important ceremonies and parades. 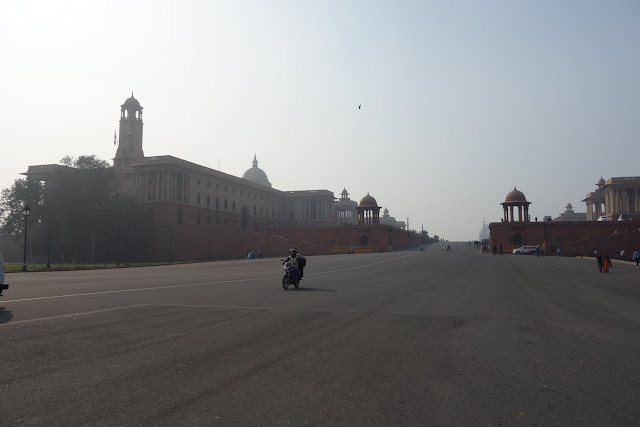 Vikas and I hopped in an auto rickshaw to take a ride down Rajpath to the presidential palace, where we stared through the wrought iron gates at a truly huge and awe-inspiring building. With more than 340 rooms and set over 320 acres, the palace dwarfs the White House. When the last British Viceroy lived here, hundreds and hundreds of staff kept the place running – 400 alone just to tend the gardens! 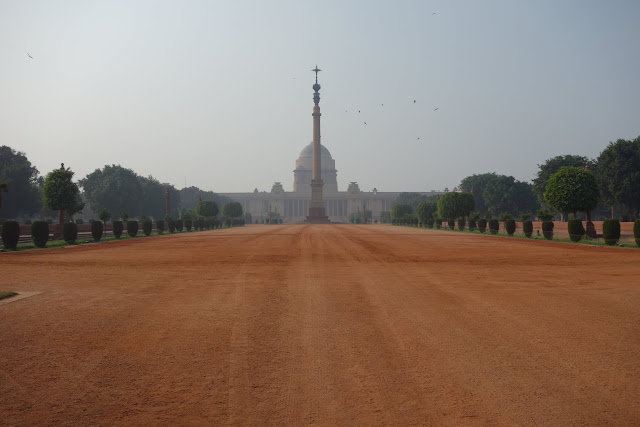 We made a couple more stops before parting ways. Vikas wanted to see a few more sights that were further away before catching his train and I was tired from a long first day in India and ready to head back to Paharganj.

Taking the Delhi Hop On Hop Off bus was the perfect introduction to my trip. I’m so grateful I met Vikas – who taught me so much about his country and made me feel welcome here from day one.