We decided our last stop in Colombia would be the small city of Manizales. The new bus terminal is conveniently located right next to a new metrocable station (another cablecar similar to the one we rode in Medellin) that heads up to the town center. This is quite unique, as usually the town or city center is located in the valley and the residential areas are up on the hill. Luckily for us, our hostel, Base Camp, was located literally steps from the metrocable. Although it was quite cold and rainy while we were in Manizales, our hostel had a great view from the dining area, kitchen and rooftop terrace of the surrounding city and countryside.

Shortly after arriving, I convinced Erik to take a tour up to the top of the Cathedral, which was built by the people of the city. The exterior was quite impressive and the interior was full of gold and beautiful huge stained glass windows, which we got to see up close during the climb to the top. 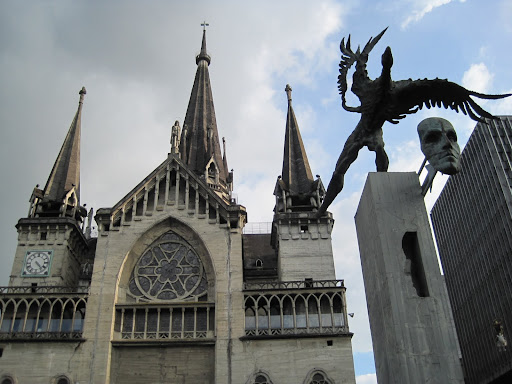 Erik has done far more adventurous activities on this trip (i.e., scuba diving, ziplining, etc.), but was still petrified of the walk along the roof of the Cathedral! It only got worse from there as we climbed some 400 steps on circular stairs to the top of this tiny 106 m (350 ft) tall tower. It’s rumored to be the tallest in the country. 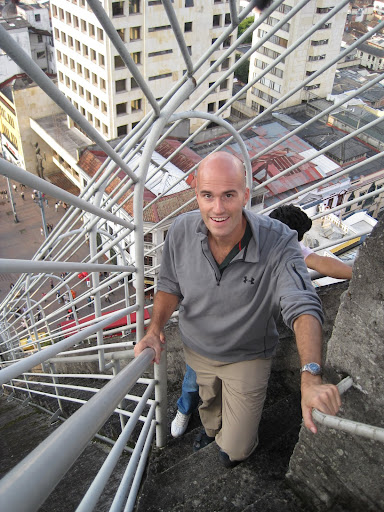 I was soaking in the fantastic panoramic views of Manizales, while Erik stood inside the doorway and told me to hurry up and take photos so we could head back down. 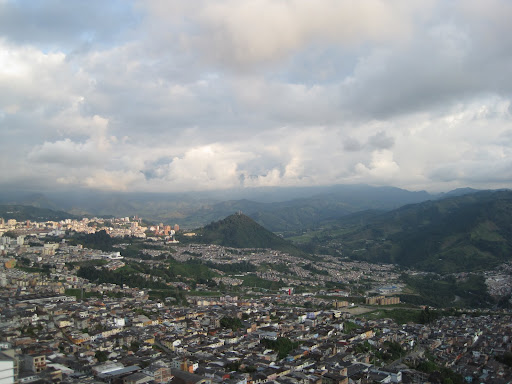 Our crazy tour guide climbed up on the metal fence to take this amazing photo of us. We loved the photo, but agreed that he was totally nuts. 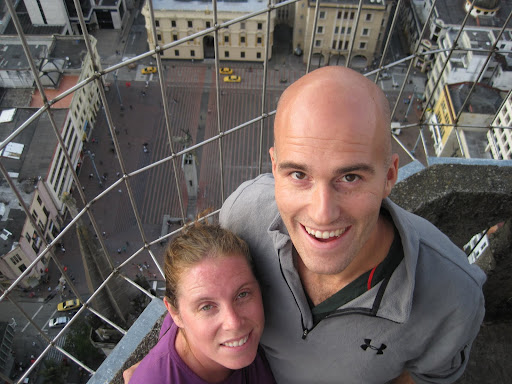 Our second day in Manizales was spent scaling the Nevado del Ruiz Volcano. We still felt pretty rough the day after, and decided to take it easy visiting a coffee finca, since we were in the Zona Cafetera coffee-growing region.

Just 40 minutes from Manizales along the scenic “coffee highway”, Hacienda Guayabal provided a wonderful look into the production of Colombian coffee. 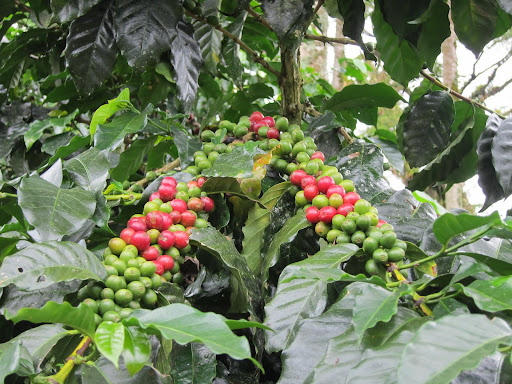 Although we had visited a coffee finca in Guatemala, this tour was more personal and the process seemed a lot more traditional with less machines and more work being done by hand. We saw the entire process from the coffee plants to the cup. The small plants, the red berries, the other fruits and flowers growing on the finca. 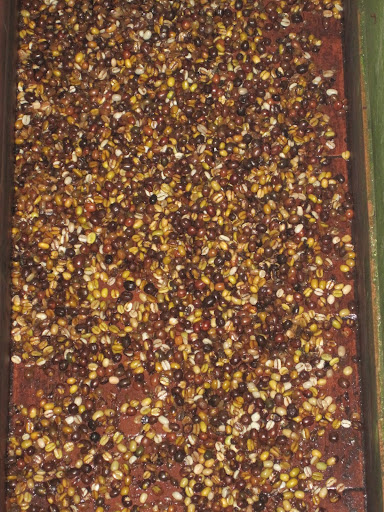 We saw men high in the steep hills picking coffee berries, the washing process, the sorting machines, the roasting oven and even saw a man who’d worked there for years handpainting wording onto a large coffee bag. We also met the sweet old woman who owns the finca and she served us a nice cup of coffee and a small lunch. It was a wonderful day and we were so glad we took the trip out to the finca. 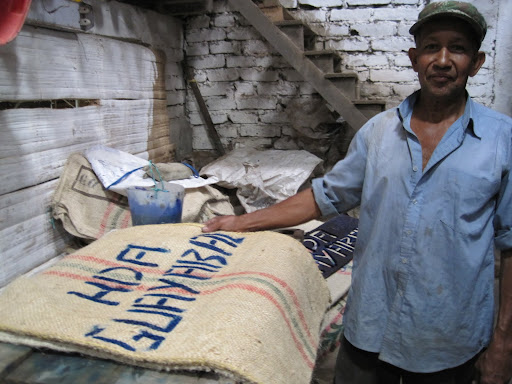 There were some cool people staying at our hostel – one guy from Ecuador and another from Argentina. We were happy to add some notes to our guidebook since both of these places were on our itinerary.

Although we had only planned to spend two weeks in Colombia and even though I was a bit nervous entering the country due to its reputation in the past, we loved the four weeks we spent there. That old saying really is true – you can’t judge a book by its cover.

2 thoughts on “Coffee and a Crazy Cathedral in Manizales, Colombia”