When I lived in London, and worked at a rather inconvenient location for the bus or tube, I used to navigate my bicycle more than four miles every morning through the city’s busy streets, zipping around double-decker buses, dodging opening doors on black cabs, and trying to keep up with the flow in roundabouts. Somehow, I survived – though there were some close calls and one spectacular crash where I ended up stumbling into work with torn clothing and a gushing wound.

I liked cycling, but really it was something I did out of necessity, allowing me to get to work in under half an hour instead of a full hour using public transport.

When I moved across the pond to New York City, I never really considered getting a bike. I’m sure there are some fantastic places to cycle around the city, but the extensive 24-hour MTA system really can’t be beat for convenience sake. 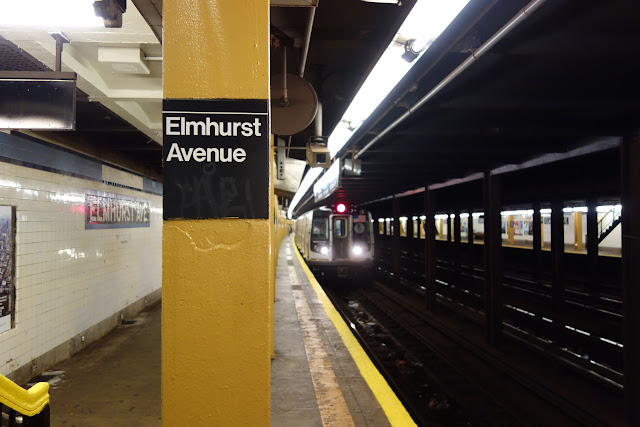 So, when I tried out Citi Bike – New York City’s new bicycle sharing program – it was actually my first time on a bike on NYC streets! I was a little intimidated.

There are currently around 6,000 of these bright blue bikes docked at more than 300 stations in Mid and Lower Manhattan as well as Downtown Brooklyn. There are plans to expand this up to the Upper East and Upper West Sides and into more neighborhoods in Brooklyn and Queens. 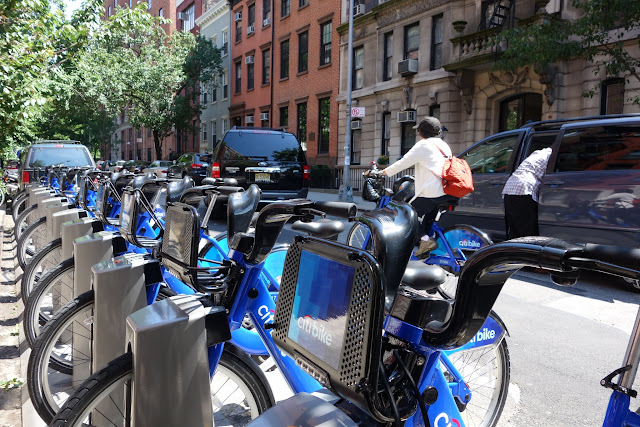 While it’s gotten some bad press since launch, it was a beautiful sunny day yesterday, so I decided to kick the tires on Citi Bike and cycle around Washington Square Park and the West Village.

Each station has an electronic kiosk, where you can buy a 24-hour pass for $9.95, or a 7-day pass for $25 (plus tax on both amounts). An annual membership can be purchased from their website for $95. 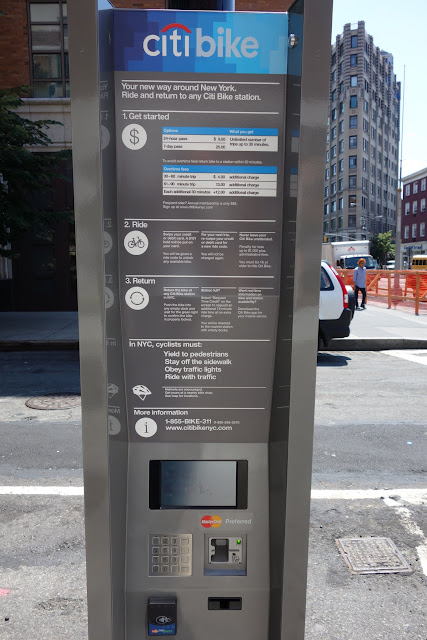 A pass allows you to use Citi Bikes anywhere in the system, however each bike can only be used for a maximum of 30 minutes. After 30 minutes you are hit with penalty fees which can be quite steep. 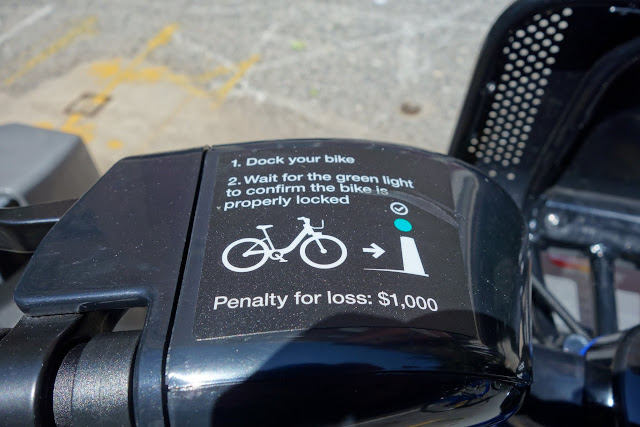 Citi Bike riders must be at least 16 years old, and you must be at least 18 to buy a pass. The kiosk confirms this along with a number of other details before you can take a bike. It’s a bit of a laborious process – it will be interesting to see if it makes me go through all this again next time I rent one. Luckily, they make it easy to purchase two passes at the same time, if you want to get cycling with a partner.

After accepting more terms and conditions and agreeing to follow NYC traffic rules, I was finally given a 5-digit code to check out a bike. 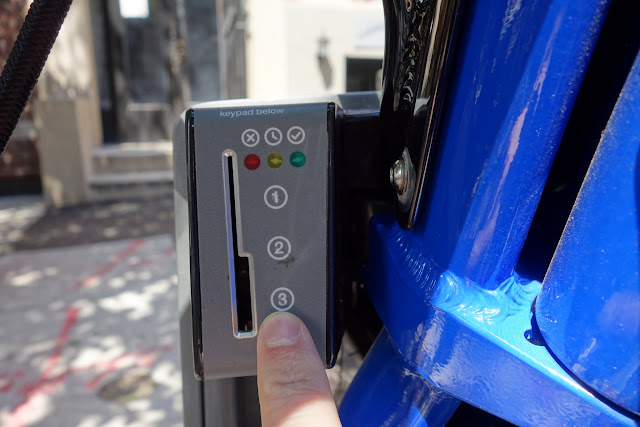 The bikes themselves are very sturdy and comfortable, and come with an adjustable seat, kickstand, and small front rack with bungee cord to carry small items. I wish they had included a basket instead of the open sided rack – it’s very easy for items to fall out unless they are looped through the bungee cable.

It’s a three-speed bike, with a handlebar changer. I found the gears to be perfectly adequate – you could probably get by with just one on the flat terrain of mid and lower Manhattan.

Helmets are not provided, but of course, they are recommended. 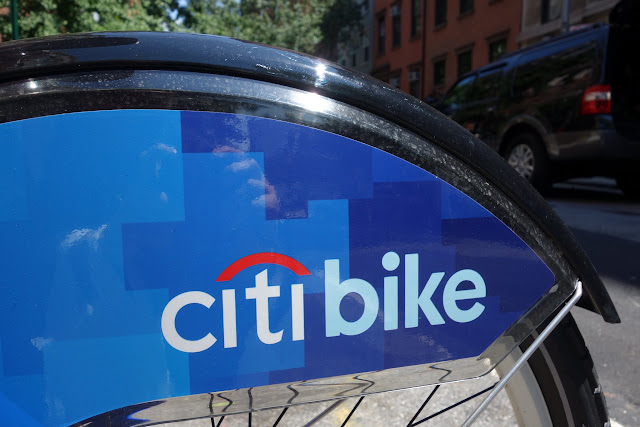 Not wanting to go over the 30 minute time limit, I set an alarm on my phone and set off from the station on Washington Place and Sixth Ave.

Like I said, I’ve never cycled in NYC before, so I was pleasantly surprised there are some dedicated bike lanes, at least in the West Village. I enjoyed puttering down Macdougal, stopping at red lights and staying off the sidewalks as required – though I saw other cyclists breaking these rules. 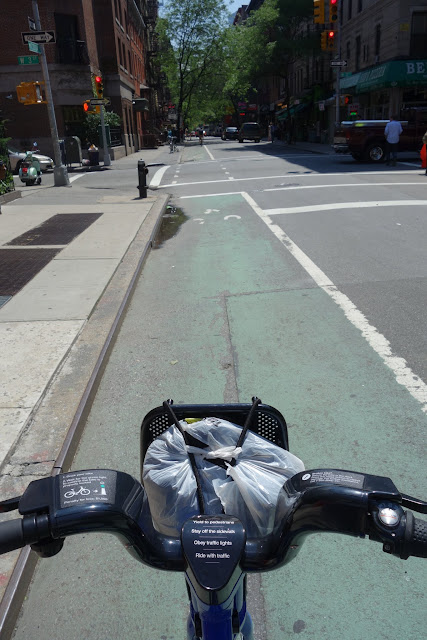 Things got a little more chaotic on the narrower streets where there were no bike lanes and I had to dodge through gaps in stopped cars.

Just when I was starting to have some fun, my phone alarm went off. My time was nearly up, but I had not gone very far. Now worried that I would bust my 30 minute limit I started hunting for another station. I found one fairly easily off Bleecker Street. 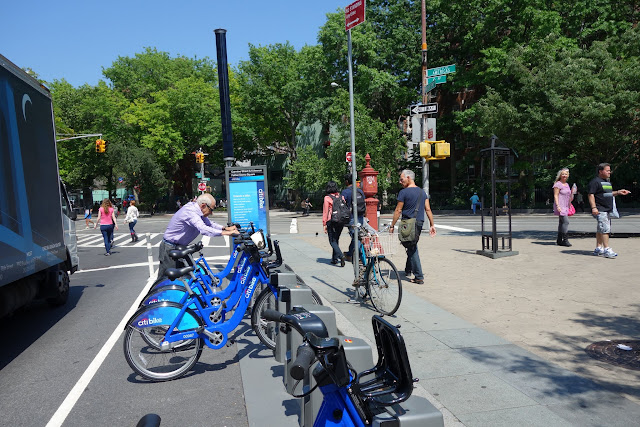 While the bicycles are nice and there are plenty of stations, I have to say the 30 minute limit really, truly sucks. I doubt you could go very far in this time, so it’s probably only good if you know exactly where you are going, how long it will take, and travelling within a neighborhood or its close surrounding area. 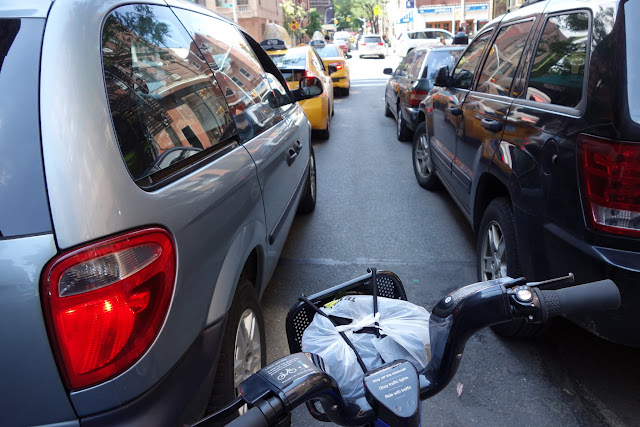 And for this reason, I have to discourage visitors to New York City from renting these. Trying to enjoy the sights while operating within this time limit would be impossible, especially if you are unfamiliar with the city. Instead, rent a bike in Central Park, where they will give you an hour or more and you can actually enjoy yourself.

Or, take the Subway. Sorry, Citi Bike, but that’s what I’ll be sticking to.