As we left the Marlborough wine region, we made one last stop at Peter Yealand’s vineyard. This winery uses environmentally-friendly growing and wine-making procedures. The location of his grapevines was dubious at first, as he chose an area with many hills that are battered by strong winds. Somehow, it all paid off and his wines have become extremely popular worldwide. We were lucky to do a very extensive tasting with a Canadian man who was running the tastings that day. We must have tried nearly 15 wines, I tried to stick to white wines only, as I had a bit of driving to do. The wines were spectacular and very complex. We really liked the idea of his everyday drinking wines that are bottled in plastic for easier transport and they can easily be recycled. We stopped to have a picnic lunch among the grapevines. 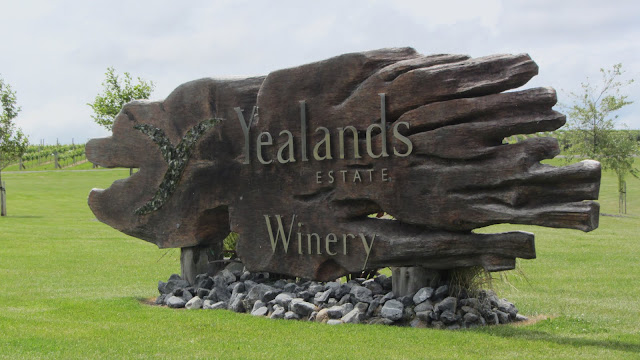 Our road trip took us along the beautiful East Coast of New Zealand’s South Island. The scenery was absolutely stunning. Crystal blue ocean water meeting huge mountain cliffs. It was all the magnificent things you think of when you picture a New Zealand road trip. 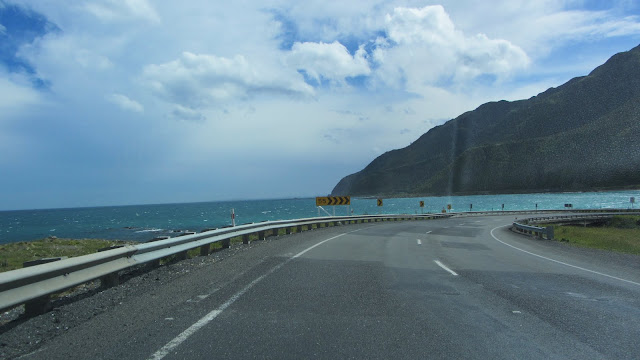 As we got closer to our next destination, Kaikoura, we were searching for this secret family of New Zealand fur seals. We had read online about this out of the way spot where you can see a group of baby seals playing in a stream and under a waterfall. Along the way, our friendly Tourism Radio host Jane told us about the secret spot as well. 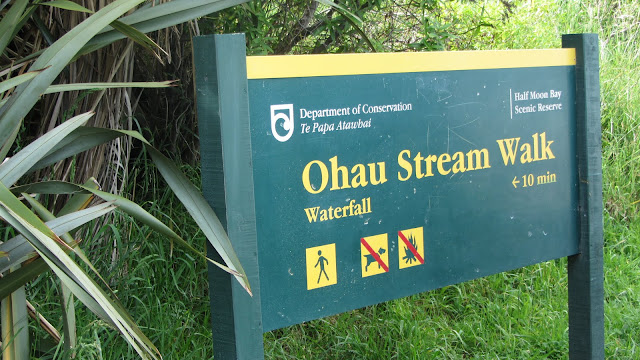 We found the parking area, and as we walked up the small path through the trees and along the stream, we spotted our first furry friends. Four tiny fur seals were just playing around swimming in a shallow pool of the stream. They were just precious. We were able to get quite close to them and watch them enjoying their playtime with their seal siblings and friends. A few other people got a bit too close to them and even touched them. Although it’s tempting, it’s dangerous in several ways. Even though they seem very sweet and cute, they can still pack a strong bite if they feel scared or threatened. And the mothers will often abandon their pups if they feel (or smell) they have been touched by human hands. 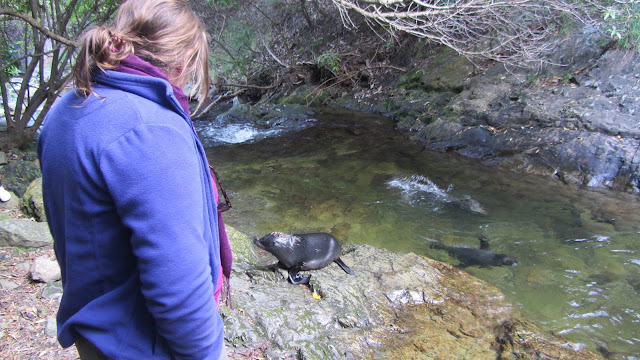 After enjoying the first pool of seal pups, we continued along up towards the waterfall. We would see a pup or two just floating in the stream, flipping around occasionally. I found a lone seal at the bottom of a hill in the stream. He was so curious and checked me out for a good 5 minutes as I said hello from above. Just adorable! 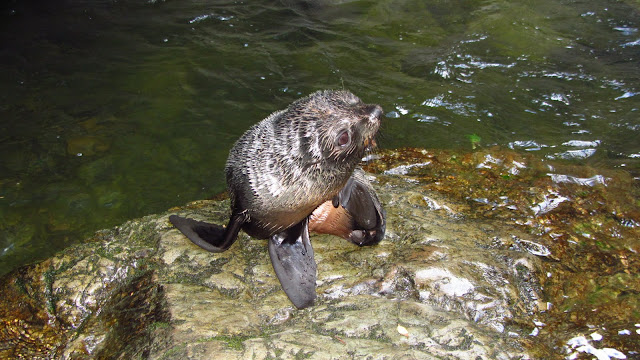 When we reached the waterfall, we were awestruck by the beautiful scene. A lush waterfall full of about 20 or more playful seal pups. They were having a blast playing with each other and put on quite a show. There were a few adolescent seals along the path up on some rocks, so we tried not to disturb them as we walked by. One of the adolescents must have been feeling protective or scared, and made it known that he didn’t like us standing so close to the waterfall pool and chased us a bit down the path. 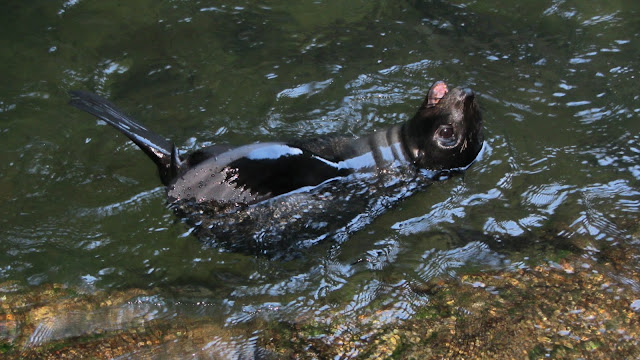 We loved these little guys so much, we drove back the next day to say Hi again! It was a wonderful way to see seal pups up close and in a natural environment. And as a bonus, it’s FREE! 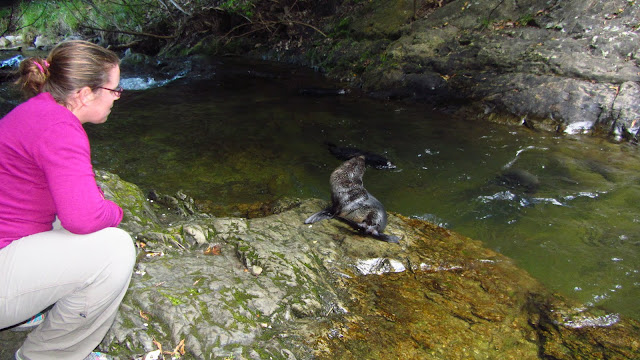 We checked into our adorable little cabin at the holiday park. We hit the supermarket to stock up on supplies, but ventured into town to check out the restaurants and bars. In town, we ran into a nice English couple that we had met on our wine tour in Marlborough. It was our lucky day, the Strawberry Tree pub was having their weekly pub quiz. We love pub quizzes! After ordering dinner and a couple of beers, we joined in. We were just a team of two and no real match for some of the regular group teams. Although we did get a few questions right that no one else did (one was about a ticker tape parade), we really had no chance. It was the toughest pub quiz we’d been to. The host was really funny and did say that the questions were particularly tough that night. Ah well, it made for a fun night out.

While we were in Kaikoura, it was Thanksgiving! At the local supermarket, we stocked up on whatever comfort Thanksgiving food items we could. It was so nice to cook our Thanksgiving feast in the holiday park’s huge kitchen. As an appetizer, we made my Mom & Caite’s special caramelized brie with pecans. We substituted chicken for turkey (it was far too expensive) and made candied sweet potatoes, homemade mashed potatoes, cranberry sauce, my famous corn bread pudding, stuffing and sauteed zucchini. 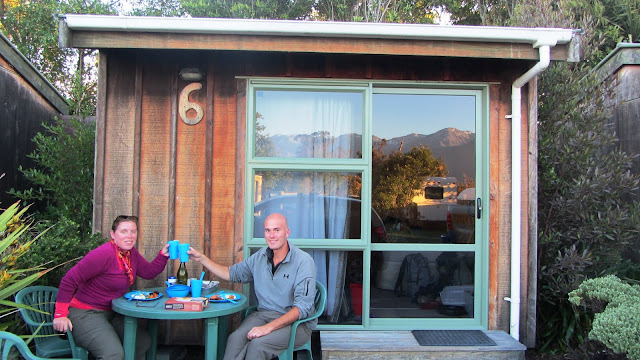 Even with the time difference, we managed to Skype with both of our families while they were celebrating the holiday. It was almost as if we were right there with them. We ate our Thanksgiving feast along with a nice New Zealand sauvignon blanc on our table overlooking the trees and mountains. It was a really nice way to celebrate the holiday. 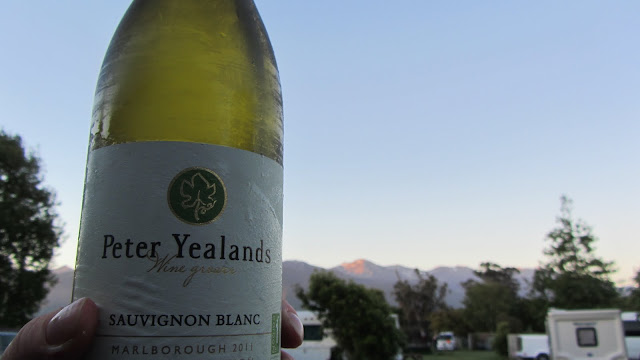 One of the main draws of Kaikoura is its sperm whale watching cruises. We love our humpbacks, but were excited to see sperm whales up close. Our Top 10 Holiday Park card helped us get a discount, but it was still extremely expensive. It was a gorgeous day and we hopped onboard and enjoyed the sea views. 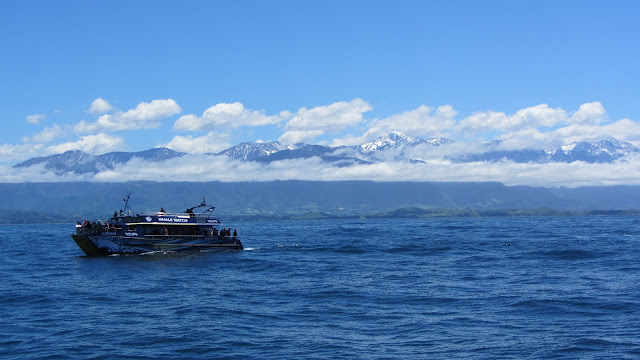 Sperm whales are often found off of Kaikoura’s coast. They are somewhat shy and our captain resorted to using a hydrophone (an underwater microphone) to try to find us a sperm whale. 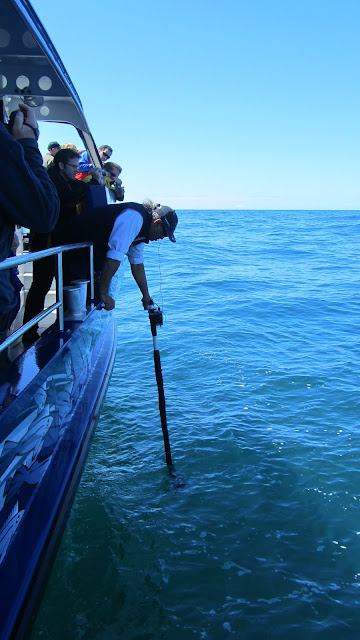 We finally saw one! Although it wasn’t quite as exciting as we’d anticipated. Sperm whales spend most of their time underwater, only surfacing for 10 minutes an hour to breathe and re-oxygenate. Mainly, they just float and breathe. 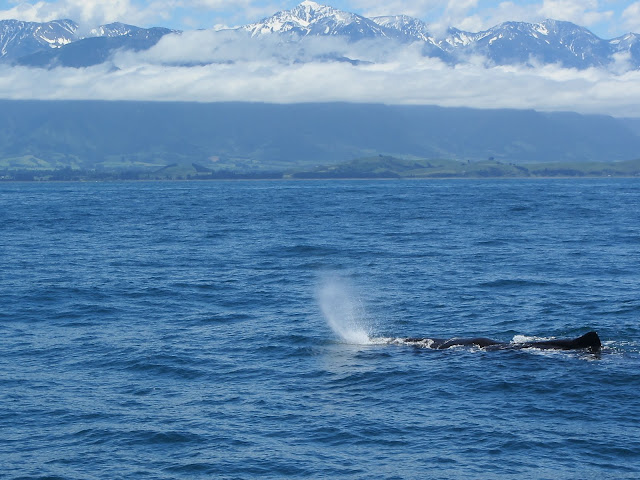 Finally, the big moment is when they dive back down and show off their massive tails. It was interesting to see, although our love remains stronger for the humpbacks. 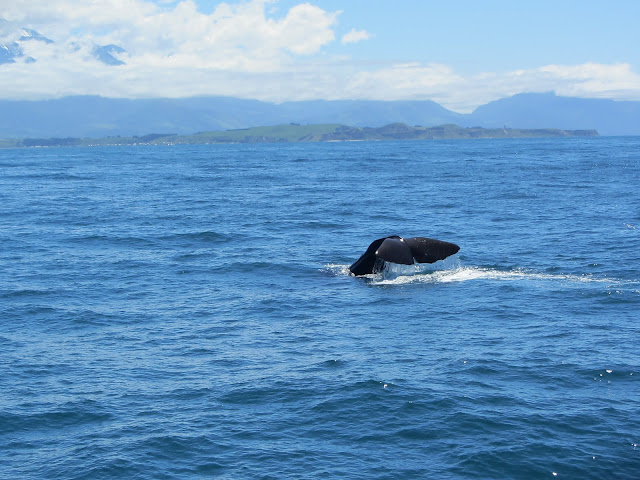 Kaikoura was a wonderful wildlife stop for us, and a charming place to celebrate Thanksgiving. If you ever find yourself travelling through Kaikoura, be sure to spot at the Ohau Waterfall walk parking area to see New Zealand fur seal pups in action!