While staying in the peaceful riverside hostel in Lanquin and after seeing the main attraction of this small town Semuc Champey, we had heard that the only other thing to see were the Bat Caves.

Mind you, I am not a huge fan of bats and Erik was less than thrilled with the idea, but this sounded like a must-see. So, we set off for the hostel’s night tour of the Bat Caves.

Once again, our trusty headlamps in tow, we were ready for some more cave exploration. 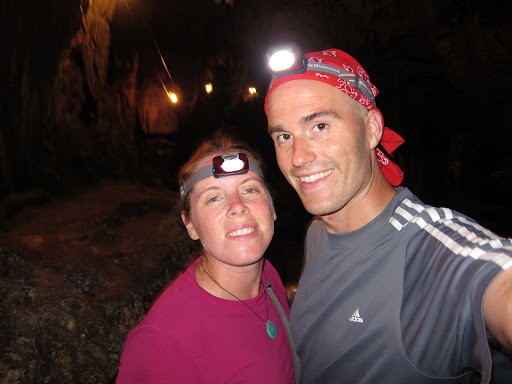 As we arrived deep in the woods just before dusk, we were greeted by gun-toting security who escorted us to the caves. Our tour guide began by vanishing into a small cave at the entry and reappearing with a small bat in his hands.  Some members of our group chose to snatch the opportunity at a cool photo-op by holding the bat by its wings. We chose the germ-free route and just took photos. 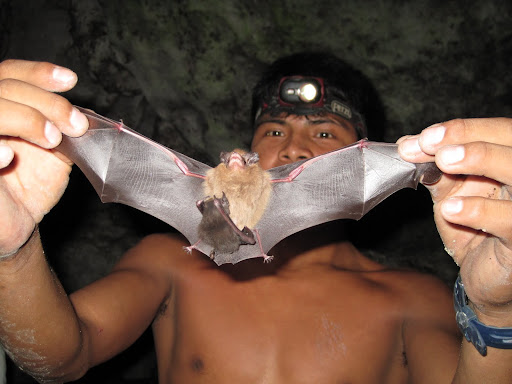 The caves had that dank, wet, pungent smell of bat droppings. Not only did it lead to many a slippery step (even with high-traction shoes), but the railings were covered with the same brown slime. As we maneuvered through the caves, headlamps aglow, Erik slyly remarked, “Ya know, this is pretty much what I expected of a bat cave.” 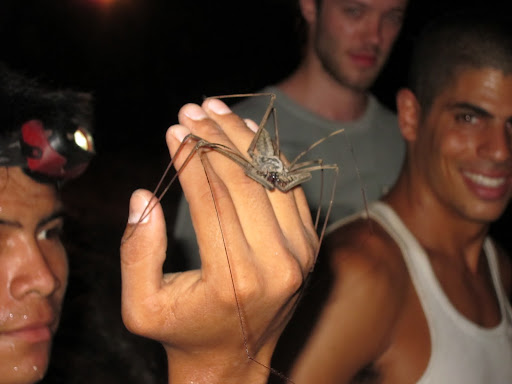 Our guide went on a quest for the big brown spider. He finally found one and offered it to those who wanted to hold it. Once again, we took photos. He informed us that this species of spider has no eyes and only senses its surroundings with its long legs. As we continued through the wet, slippery mess, I finally agreed – this was gross. 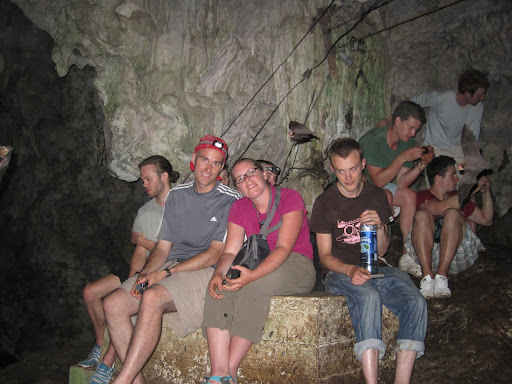 At 6pm, everyone was ushered to the cave’s opening and we were asked to find a seat, turn off our headlamps, as well as the flashes on our cameras. It was Bat Time. For the next twenty minutes, we sat right up front as thousands of bats whizzed by our ears. We snuck a few photos and unknowingly captured some very “batty” expressions. Creepy! 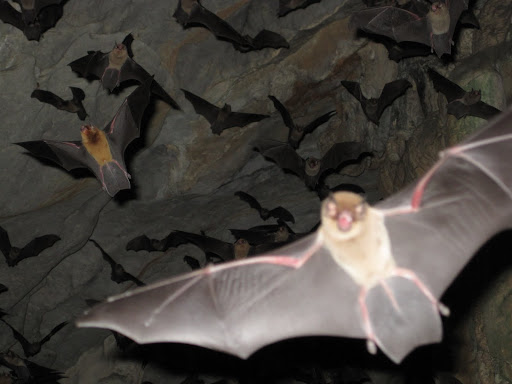 We couldn’t see them well at the time, but we will never forget the sound of them swooping within inches of our heads at top speed. It’s difficult to estimate how many bats came out of those caves, but it was definitely in the thousands.

As we exited the Bat Caves we were welcomed by a pouring rain. We waited in the dark for our ride back to the hostel, where we rushed to take a much-needed shower. All in all – a messy, but unique event that I am glad we had the chance to experience. You don’t get to see thousands of bats whizzing past your head everyday…

You can see all the photos from Lanquin and the bat caves in our photo gallery.