We’ve seen a lot of ruins and temples on our travels, everything from Machu Picchu in Peru to Borobudor in Java, Indonesia. Still, nothing could prepare us for the splendor of the Angkor temple complex in Cambodia.

In 800 AD, the Hindu King Jayavarman II founded the Khmer Empire of Kambujadesa (Cambodia), gaining independence from Java. Over the next six centuries, the empire flourished, controlling much of modern-day Thailand and Laos. The magnificent city of Angkor was their buzzing capital, where the Khmer rulers built enormous temples and monuments. At one point in time, this was a huge city – recent archaeological studies have unearthed proof that Angkor was most likely the largest preindustrial city in the world, supporting a population of approximately one million people.

Even today, the Angkor complex is huge. You could spend an entire week exploring here, but afraid we would get “templed out” we decided to dedicate only two full days to visit.

From the touristy little town of Siem Reap, we hired a tuk tuk to hit all the sights. Since they are so spread out, it’s necessary to either rent motorbikes or hire a tuk tuk. We did see a few people riding around on bicycles, but considering the oppressive heat and humidity, this seems like a bad idea. 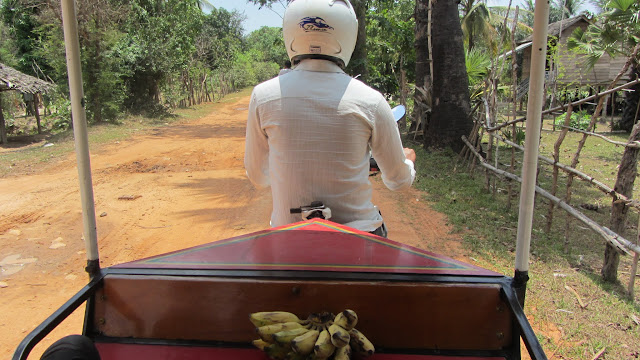 The ruins of Angkor comprise the largest religious monument in the world. While modern day Cambodia is overwhelmingly Buddhist, during the rule of the Angkor kingdom, this part of the world followed Hindu beliefs. As such, these temples are dedicated to Hindu gods, and feature carvings and statues depicting famous Hindu epics. Buddhism took hold around the same time that the Angkor period ended. In 1431, neighboring Ayutthaya sacked and looted Angkor, and it was abandoned shortly thereafter. The largest and most famous temple, Angkor Wat, became a Buddhist shrine. 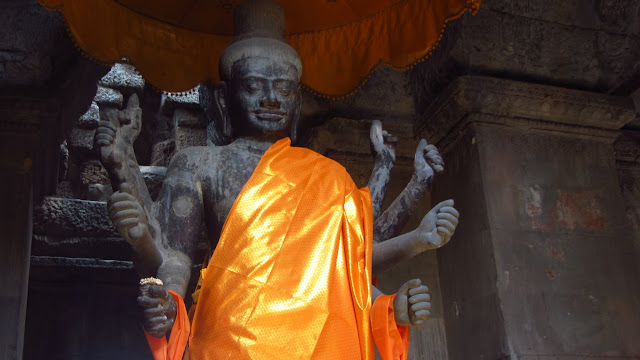 Cambodians are proud of Angkor Wat – you can find it printed on their bank notes, coins, beer labels, and even their national flag. And most people you talk to cite the eponymous Angkor Wat as the highlight of their visit. We decided to save this main attraction for last, visiting as many other temples as we could squeeze in before ending at Angkor Wat on the second day.

We started at Angkor Thom, the true center of the Khmer empire. This fortified city contained the Royal Palace, administrative buildings, and a number of temples, along with residences for the military, priests, and officials. Our tuk tuk stopped just outside the city gates, lined with rows of intricately carved statues engaged in a tug-of-war. 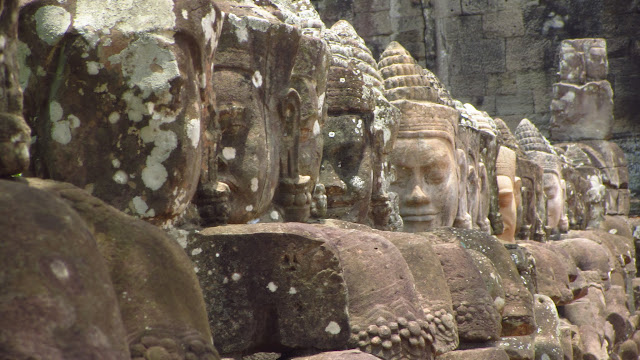 At the center of this city stands the Bayon – the state temple. This impressive structure is topped with a number of towers, each containing four smiling faces. 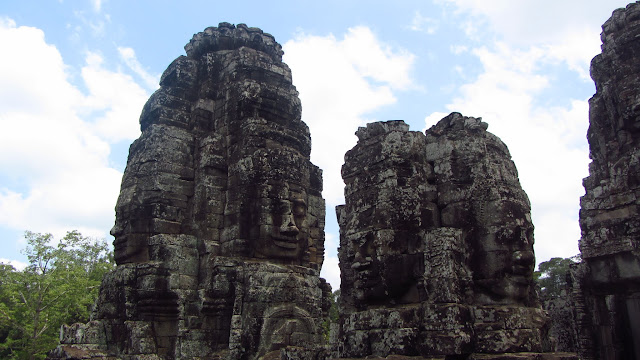 From there it was a short walk to the Baphuon Temple, a massive multi-tiered structure which is reached via a long, raised walkway. They only let you climb up a little bit of the towering temple, but we were in such awe that – despite the boiling heat – we decided to stroll around the entire perimeter. Baphuon is supposed to represent Mount Meru, home of the supreme Hindu gods Brahma, Shiva, and Vishnu. 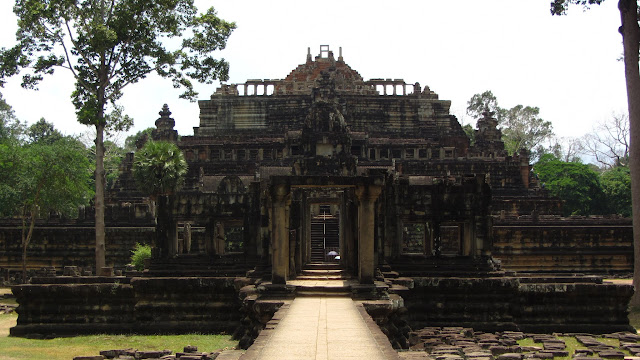 Finally, we visited the Elephant Terrace, which was built for the king to view victorious parades of his army, and other public ceremonies. As the name would imply, a large number of carved elephants are featured. 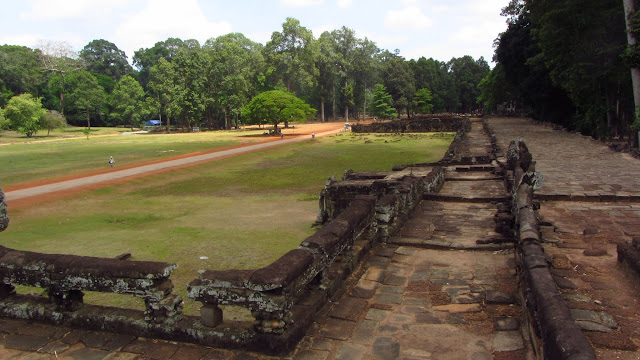 Almost every square inch of the Angkor complex features intricate carved reliefs and sculptures, especially celestial figures such as devas and apsaras. 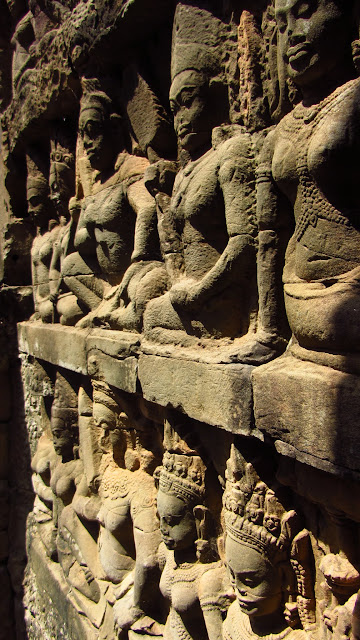 The soft sandstone used in the construction of Angkor, which allowed these intricate carvings, is deteriorating fast. In addition to the constant fight with the natural elements and surrounding jungle vegetation, the monuments are now under threat due to rampant tourism. Since the release of the film Tomb Raider, which was shot here, and the emergence of Cambodia as a major tourist destination, the temples have been deteriorating even faster. Simply put, these structures were never built to withstand the roughly two million people that now come each year to visit. 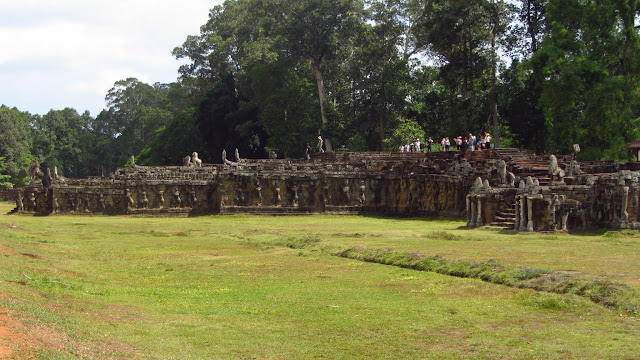 Hoping to escape some of these stifling crowds, we spent the rest of our first day at some of the smaller sites, with less people. Unfortunately, rain clouds were starting to gather and it looked like we were going to get wet. 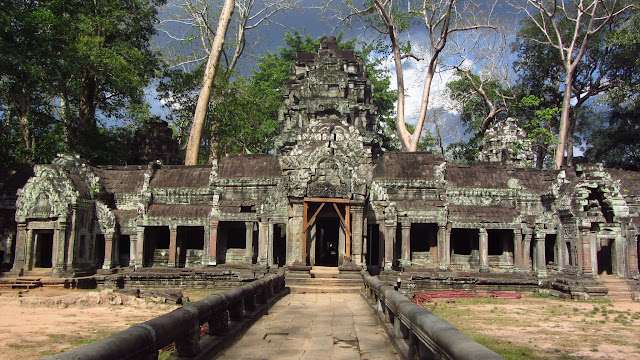 We were able to wait out the storm in a covered temple, where we happened to bump into a couple we had met at dinner the night before.

Next up was Ta Prohm, the crumbling temple made famous in Tomb Raider. Unlike most of Angkor, where efforts are made to fight back the jungle, here it has been left in its original condition. 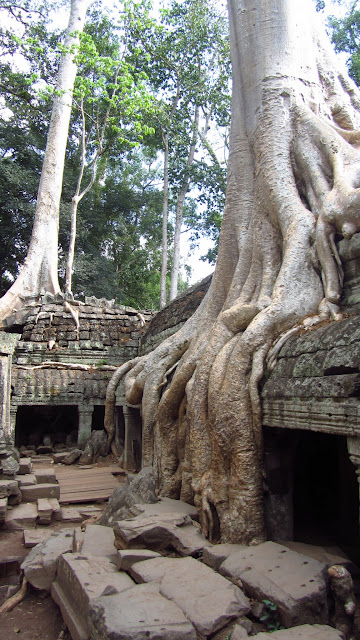 Massive trees are literally strangling the structure, with their roots wrapped around stone blocks and columns. 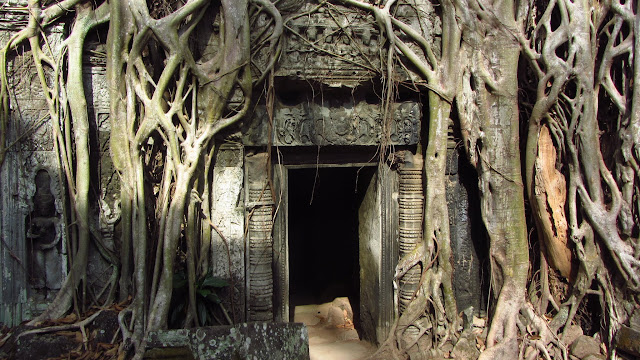 We went to the top of a tall temple for an unimpressive sunset before heading back to Siem Reap for the night, where we grabbed some cheap street eats and budget beers.

The next day, we started at Bateay Srei, a small temple built to honor Shiva. This tiny temple is the only one in Angkor not built by a king, yet it still features some of the most beautiful and complex carvings. 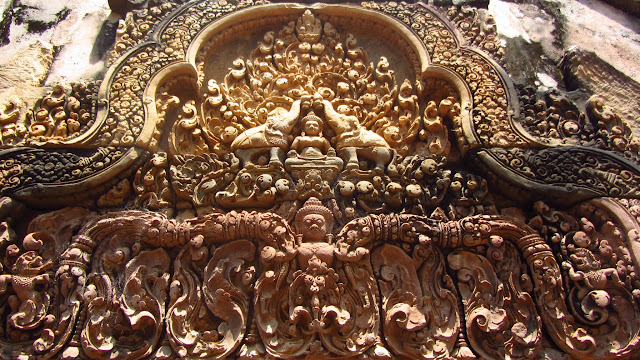 It’s hard to believe this is actually stone – the details are so fine it’s not unlike what you would normally find with wood carving. 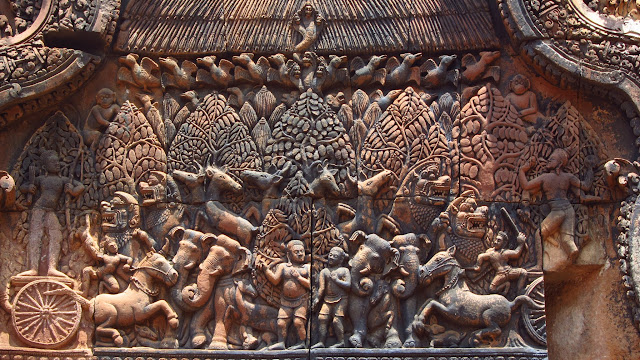 Taking a break from the temples for a bit, we stopped at the Cambodia Landmine Museum and School. It was founded by a former Khmer Rouge child-soldier, Aki Ra, who spent years of his life planting landmines. He is now spending the rest of his life trying to clean them up, and is also running a school and other programs for landmine victims. 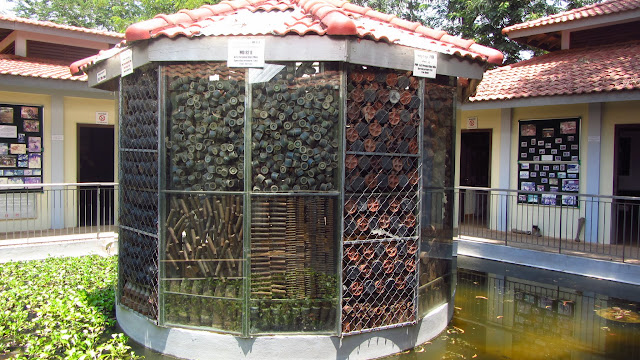 The Khmer built massive reservoirs, called baray, to support the city of Angkor. We saw some local kids splashing around in one of them, having fun with an improvised water slide. 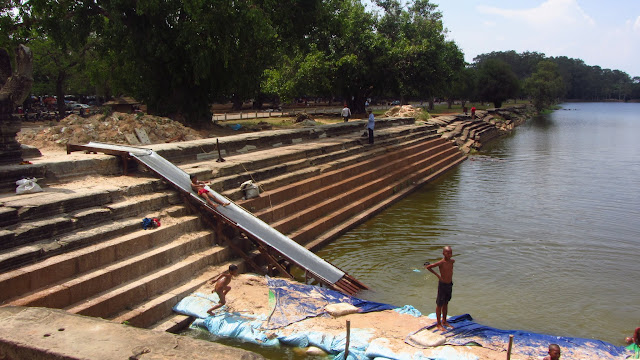 Finally, it was time for the main attraction – Angkor Wat! We pulled up, grabbed an ice cream cone to beat the heat, and joined the large queue of tourists walking in. 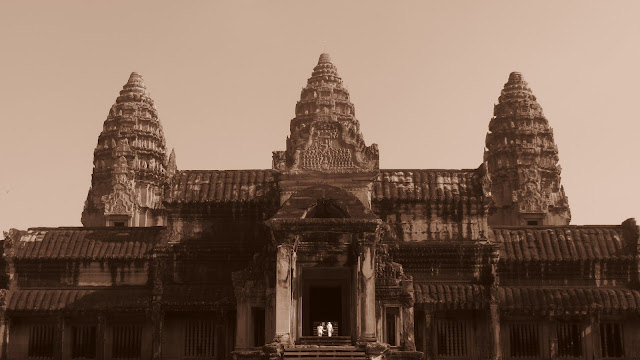 The lower part of Angkor Wat is covered on all sides by bas-relief freezes, depicting scenes from the Hindu epics Ramayana and the Mahabharata. The scale and complexity of these carvings is mind-blowing. It’s estimated it would take 300 years to construct Angkor Wat using modern engineering principles, yet they did it in less than forty years in the 1100s. 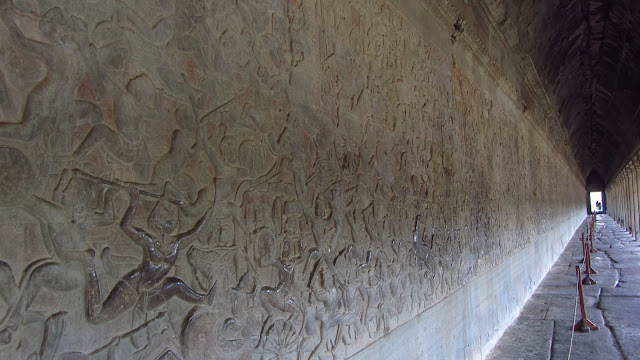 We continued up to the second and third tiers of Angkor Wat, catching some nice views and quiet nooks. 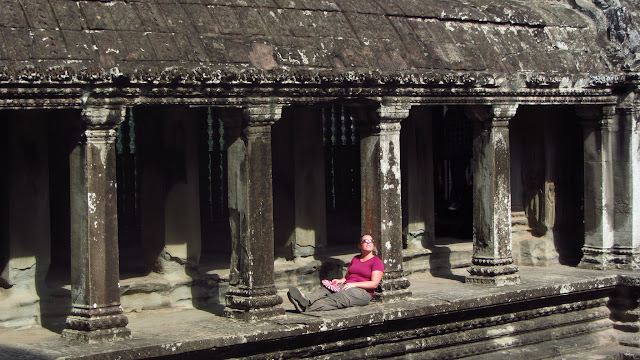 Perhaps saving Angkor Wat for last was a bad idea. By the time we explored it, we were pretty tired and the “wow factor” just wasn’t there. If anything, our favorite part of the Angkor complex was Angkor Thom, which we visited first. 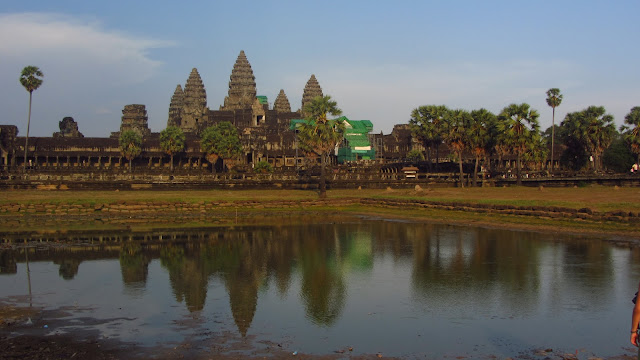 Having only visited Phnom Penh and Siem Reap, we decided to cut our time in Cambodia short and head back to Bangkok, completing our loop around Thailand, Laos, Vietnam, and Cambodia.