We set off for the Santiago metro to head for the bus terminal. This isn’t something we usually do – taking public transportation with all of our belongings on us. But we’d been told it’s easier to catch buses to our next stop, Valparaiso, from a terminal outside the city center. Once we got off the train, it was really easy as the buses to Valparaiso were right above. Luckily, we caught the next bus which was just about to leave.

We were jazzed about Valparaiso as we’d heard rave reviews about the city from fellow travellers. Just a bit of history – Valparaiso (more commonly known as “Valpo”), is one of the country’s most important seaports and is growing into a major cultural center along Chile’s central coast. Although Santiago is Chile’s official capital, Valparaiso is home to the Congress, which was moved there in 1990. The city was booming in the 19th century before the Panama Canal existed, as the city was a major stopping point for ships sailing from the Atlantic to the Pacific via the Straits of Magellan. (We jumped on a short boat cruise of the port and got to see our good friends the sea lions as well as the many military and cargo ships docked there). 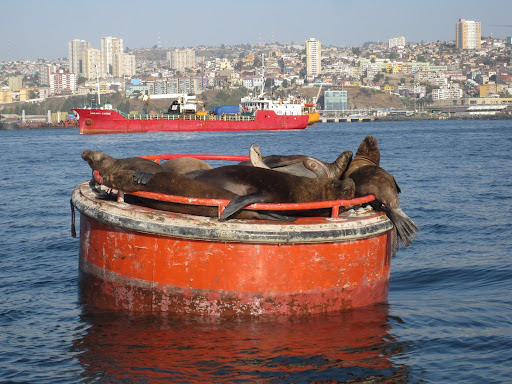 Being a major port city, many European immigrants settled there, and German, British, Italian and French citizens still live there today. In Valpo, “The Jewel of the Pacific,” you can find Chile’s first public library, the oldest stock exchange in Latin America, the first volunteer fire department in South America, and the oldest Spanish language newspaper still in publication in the world. Ok – enough history… 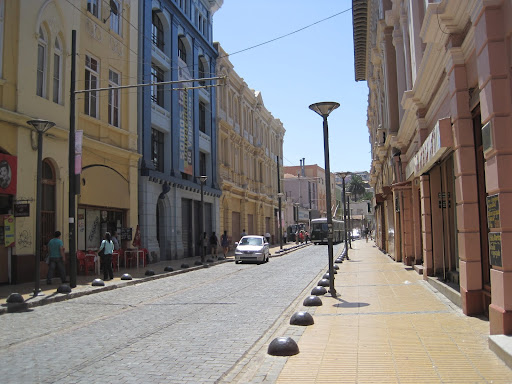 When we arrived at our hostel, Casa Bella, we instantly felt at home. It is so cozy and the comfy couches and bright colors everywhere really make the place quite charming and welcoming.

We’d heard about this famous restaurant called JJ Cruz that served a Chilean specialty – chorillana. When we sat down, we realized they only served that one dish with beef, pork hot dogs and sausage. Since I don’t eat any of that, we decided to check out Mastadonte. This diner-like place reminded me of a Rainforest Cafe with its jungle animal heads coming out of the walls. But it was packed at 6pm, so we knew it had to be good. Since we’ve been in Chile, we’ve been baffled with how late people eat here. There’s often no one in restaurants until 10 or 11pm! We managed to find a chicken chorillana on the menu. This was a variation on the traditional plate that’s meant to be shared – slices of beef, sausage, and salchicha (hot dog) over french fries with scrambled eggs mixed in. Our version had chicken and was surprisingly delicious, but is definitely something you can’t eat everyday. It’s like a heart attack on a plate! 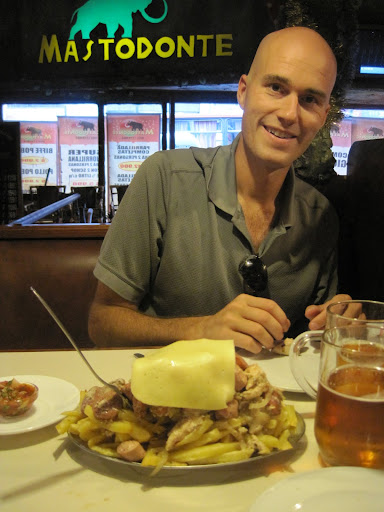 Most of the charm of Valpo is found in its 30-40 rolling hills. We explored Cerro (hill) Concepcion, where we found many cool bars, restaurants and hostels. A trip to Valpo is not complete without a ride on one of the 100 year old ascensors (funiculars) that stretch up the hills – our favorite was the one up Cerro Artilleria, which is the longest and one of the oldest. There’s a naval museum at the top and great views, as well. 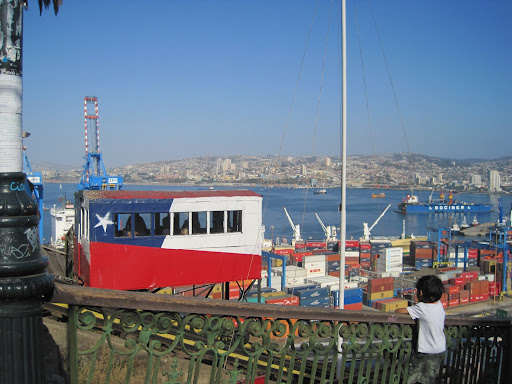 We found a walking tour that took us through the hills, which gave us great views of the city below. The houses here are painted all different shades of bright colors. We later learned this was because when the ships were docked for repairs and repainting, they’d leave the extra paint on the docks. People would grab whatever paint they could find and paint their houses. The colorful houses have become a Valpo trademark and painting these houses even became a challenge on the American reality show “The Amazing Race” last year. 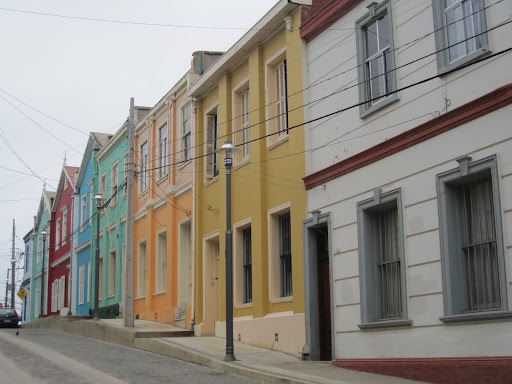 On the walk, we also got to see much of the destruction caused by the last major earthquake in February of 2010. Chile is said to have seismic activity or tremors every three months. We haven’t felt anything yet (fingers crossed) and hope it stays that way. 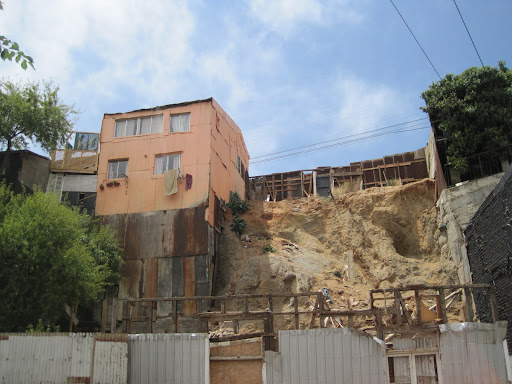 Around nearly every corner, you can find a colorful mural, some of which were created as part of a beautification project for the city. 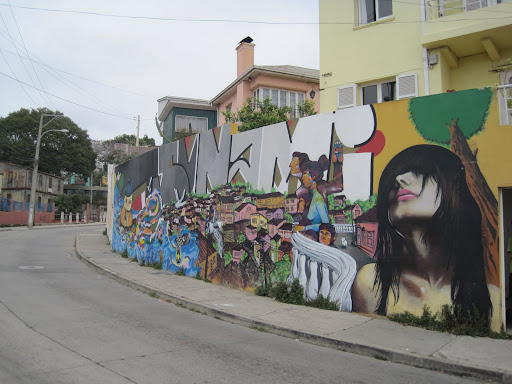 We passed a lot of murals during the walking tour, through the maze of steep streets on the hills surrounding the city. 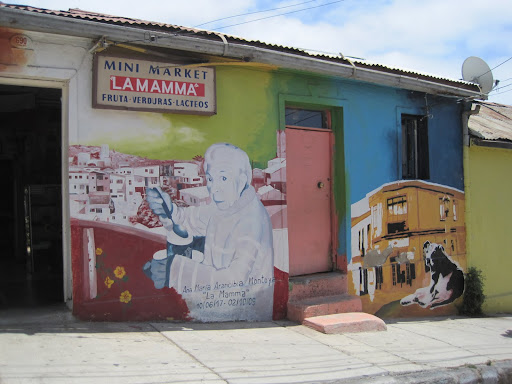 We also saw another of poet Pablo Neruda’s houses, La Sebastiana, which has amazing views of the city. 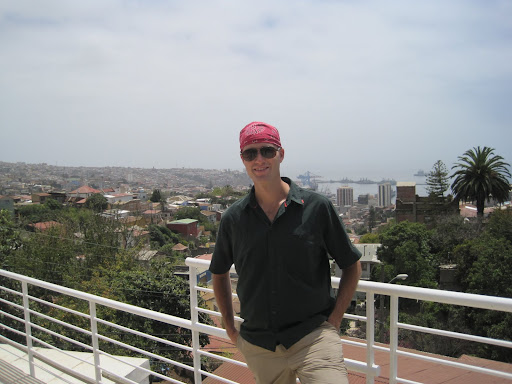 I was most excited to see something we hadn’t visited since Peru – the ocean! Adjacent to Valparaiso, Viña del Mar has become a Pacific Coast beach destination, and being there smack in the middle of summer, we saw it! The beach was gorgeous with clear blue water, but there were tons of people there. Erik said it felt like being in Fort Lauderdale. It’s very built up and the complete opposite of rundown Valpo, with hotels and hi-rises dotting the coast. We saw several being repaired which must have been damaged in last year’s earthquake. 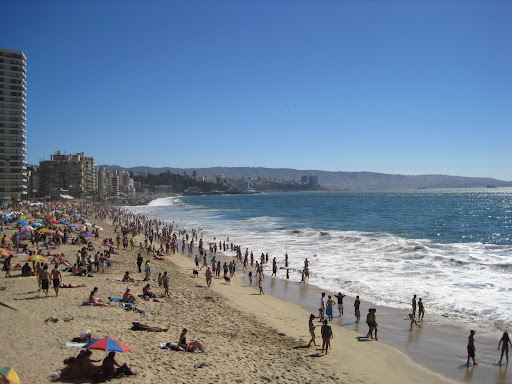 The beach was beautiful and I was happy to enjoy it for three days. The water was frigid, though I did get wet up to my knees. This is the Pacific Coast, though, and it isn’t called a surfer’s paradise for nothing. The waves were enormous, and red flags indicating that the water was unsafe for swimming were raised every day. One afternoon, I saw a man who had been pulled out too far flailing his arms, and two seconds later, two lifeguards jumped in to rescue him. After the drama, Erik and I found a beautiful oceanfront restaurant where we shared a delicious bottle of Chilean Sauvignon Blanc (for just $7) and had incredible views of the sunset over the water. 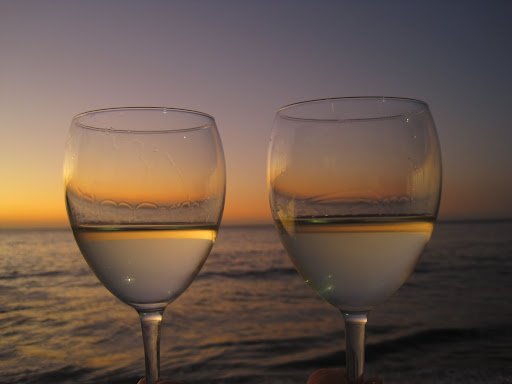 A major highlight for me was the Archeology Museum. I’m still trying to convince Erik that we should go to Easter Island, over 3,000km from the coast, where hundreds of large moai head sculptures stand mysteriously looking out to sea. But in case we don’t make it there, right in front of the museum sat a moai from Easter Island. It was so incredible to see one up close! 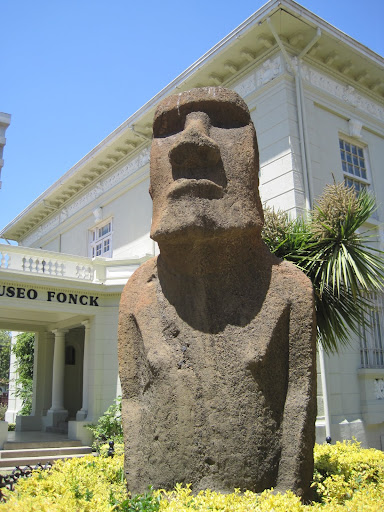 In the end, Valpo was very grungy and the stench of urine and dog droppings was quite common, but we loved soaking up the sun and chilling out on the beach in nearby Viña for a few days.